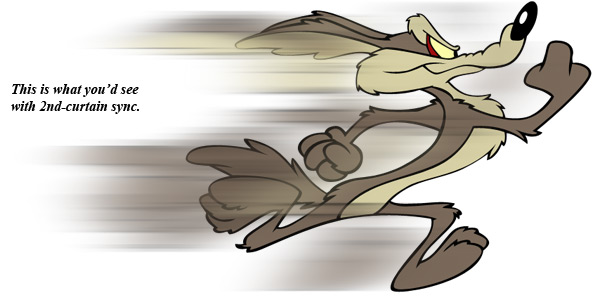 Since it is an important topic in flash photography, let’s look at what this entails and the difference between the two ways we can sync our flash .. and why would the one way would be preferable over the other.

To help us with the explanation, we have a great subject who was quite willing to pose for some comparative photographs.

How the camera’s shutter works

To understand the difference between rear and first curtain sync, we need to look again at how a camera’s shutter works – two curtains that open, allowing light to fall on the sensor or film. The time interval between when the first curtain opens and the second curtain closes, determines the actual shutter speed .. ie, how long the shutter is open. 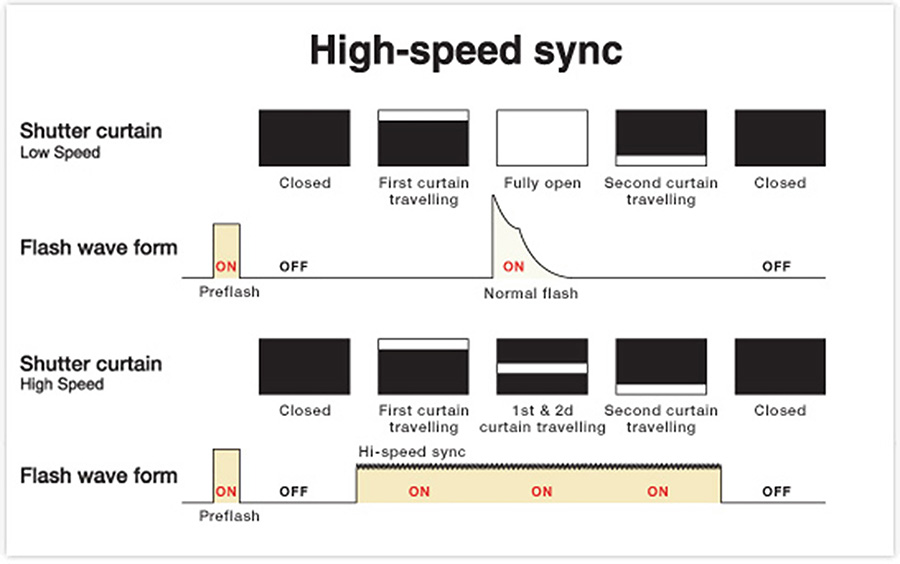 Okay, so the flash will fire when the shutter is fully open.  With slow shutter speeds – much slower than max sync speed – there is a certain time interval (the shutter speed setting), between the first curtain having completed travel, and the rear curtain actually starting to move.  With this interval, we can now choose when we fire the flash.

Since we’re working at slow shutter speeds, we’re allowing subject (or camera) movement to affect how the subject appears by ambient light.  (No flash).  If we keep our camera static, and our subject moves, there will be some subject movement registering as blur.  A blur of movement.  If we pan our camera with our subject, it registers much less.  For example, if someone runs,  and we photograph them at a slower shutter speed and pan the camera with their movement, their body and head will appear relatively sharp .. but their limbs will still be blurred because of the movement and slow shutter speed.

These two ways / times / places to fire the shutter, will have a considerable effect on how the flash and ambient exposures appear in relation to each other.  Note that the choice of first or rear curtain sync has NO effect on flash exposure, or how the flash and ambient exposures balance.  What is affected, is their timing.  We’ll come back to this point again.  Let’s look at some diagrams first. 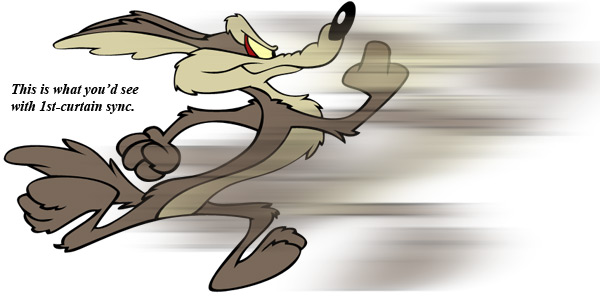 With 1st-curtain sync, the flash fires at the start of ambient exposure … the subject moves in relation to the camera (ie, we’re not panning the camera), and at the end of the ambient exposure, the shutter just closes.  The subject’s movement will appear as a blur moving outwards from the flash-frozen subject.

As is obvious in this explanatory image, you can see that rear curtain / 2-nd curtain flash looks more natural when your subject is moving in relation to the camera.

That blur behind our subject is how I think we intuitively want to see movement appear.  Perhaps it is intuitive, or perhaps we’re just conditioned by a life-time of watching movies and cartoons and reading comics.  We want to see the subject movement as a smear behind the subject, and not as a ghosting moving out of the subject.

Now it would appear that rear curtain sync is the most obvious best way to use flash at slower shutter speeds.  We have that blur of movement leading into the subject, frozen by flash.  If we photograph action, or something like people dancing, then rear curtain sync would be the way to go.

There are two problems to using rear curtain flash sync:

1. The one problem with rear curtain flash sync is a minor problem of precisely timing our flash to the action.  Since the viewfinder is blacked out for a fraction of time with a SLR as the mirror flips up, we might be a little off in timing the peak action that needs to be frozen by flash.

2.  The second problem rears its head when we use TTL flash to photograph people.  With TTL flash metering, the camera and flash emits a pre-flash to meter for the flash.  This pre-flash is emitted before the curtain opens and the main burst of flash (the actual exposure), takes place.

When to use First curtain / Rear curtain flash sync

My advice would be to use rear-curtain flash sync if you have a specific artistic effect in mind.  For most general photography, especially when you’re photographing people, I would suggest just staying with the default mode of first-curtain flash sync.  You really do reduce the chance of people blinking in reaction to the pre-flash.