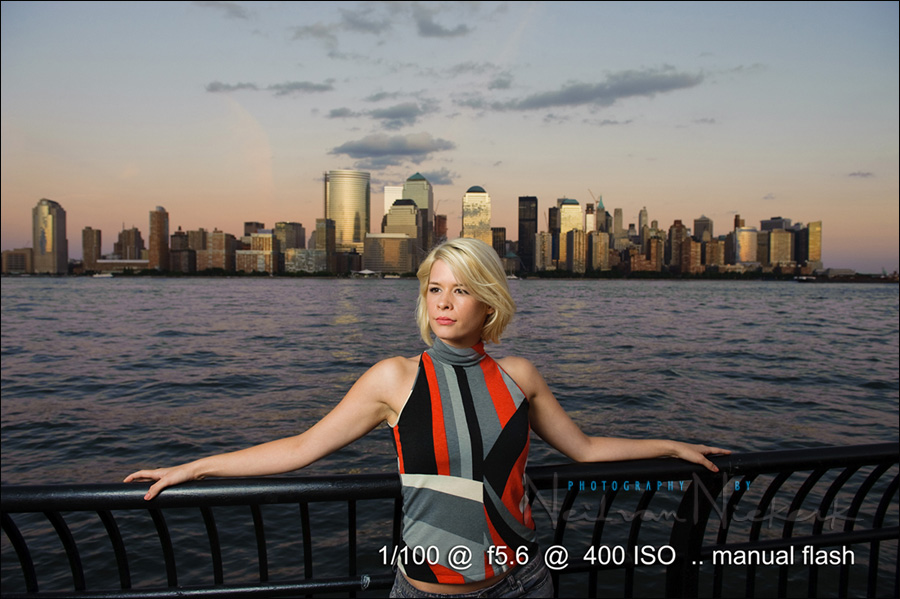 When balancing flash with the available light, the combination of settings is usually chosen so that the mood of the place and surrounds is retained – or at least have the available light add to the image.  In doing so, the advice is often given to “drag the shutter”.   In allowing a slower shutter speed, more of the ambient light is allowed to register and influence the final image.

This is a very simple technique – but an understanding of how and when to apply it, often seems elusive.

So let’s take a step back and consider ambient exposure.
Here we have three controls for our exposure – shutter speed, aperture and ISO.

Looking first at flash exposure – we have 4 controls:
– aperture, ISO, distance, power.
this distance would be the distance from your light source to the subject, and it should intuitively make sense already.  The closer you move your manual flash (perhaps in a softbox) to your subject, the brighter the light would be, and hence it would affect your exposure.
Similarly, it should already make sense that if we increase or decrease the power setting on our manual flash, this too would affect exposure.

This is a crucial concept then – within a certain range, shutter speed has no effect on flash exposure.  This key will allow us to better mix flash with available light – by controlling the shutter speed.  The reason why shutter speed doesn’t affect flash exposure, is that flash exposure is near-instantaneous, and ambient light is continuous.  You just need the entire picture area (frame / digital sensor) to be open to be lit by the burst of flash from your speedlight.  A further explanation revolves around a description of how your camera’s shutter works, which is another topic, even though closely related to understanding how flash works.  But accept for now that within certain limits, shutter speed has no effect on flash exposure.

Enough words though .. let’s see how this all translates with some images.
In this sequence, the model was lit by manual flash, against the Manhattan skyline as a backdrop.  The background light is obviously only ambient / available light.  Flash had no effect on the background exposure. 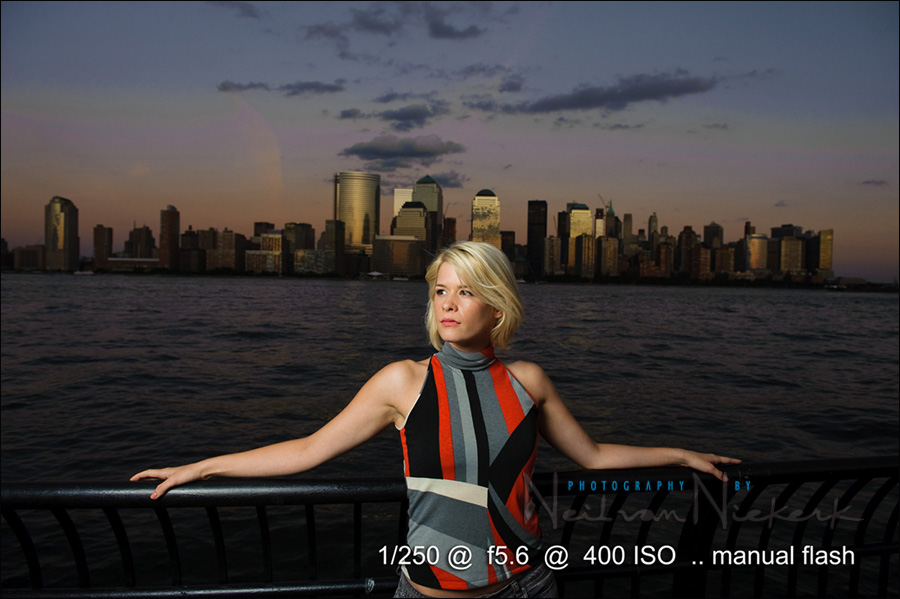 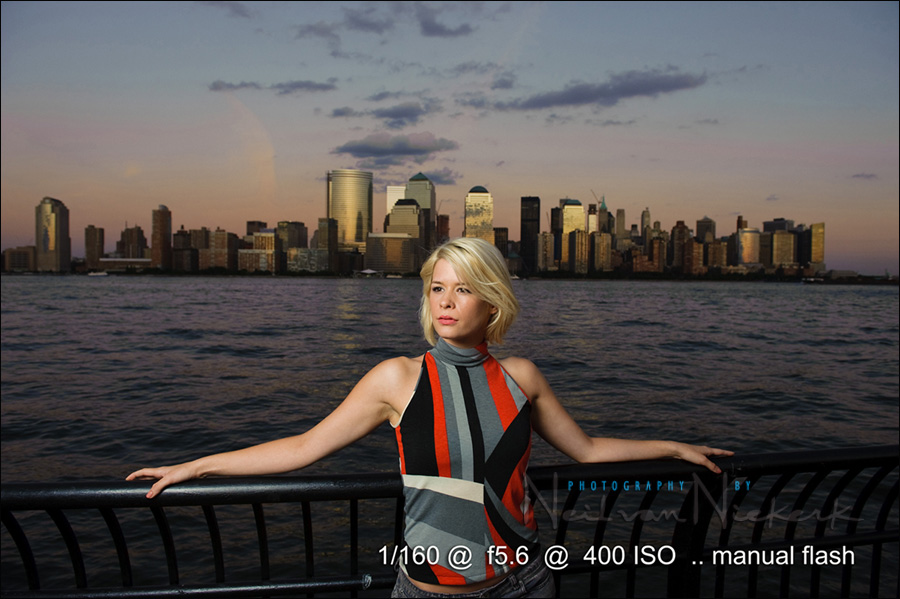 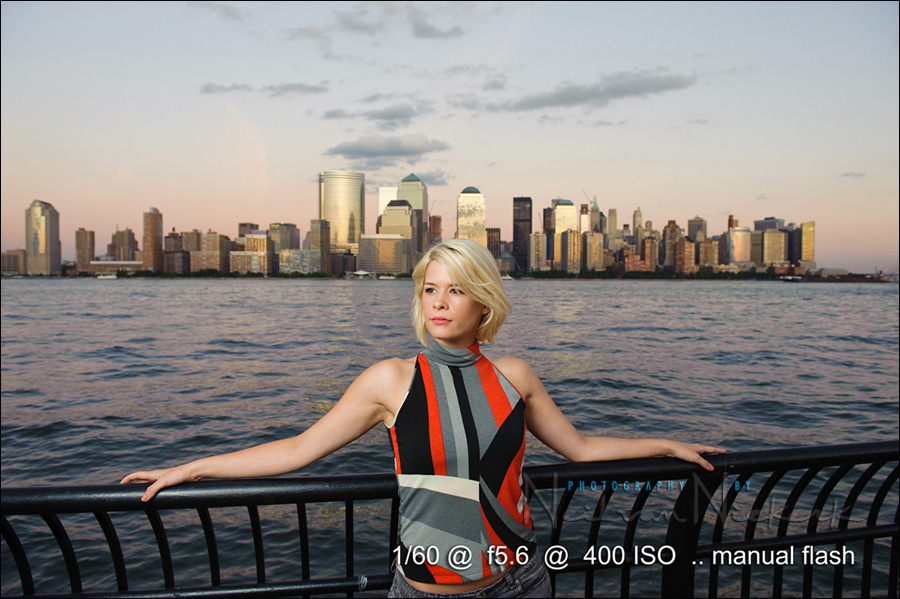 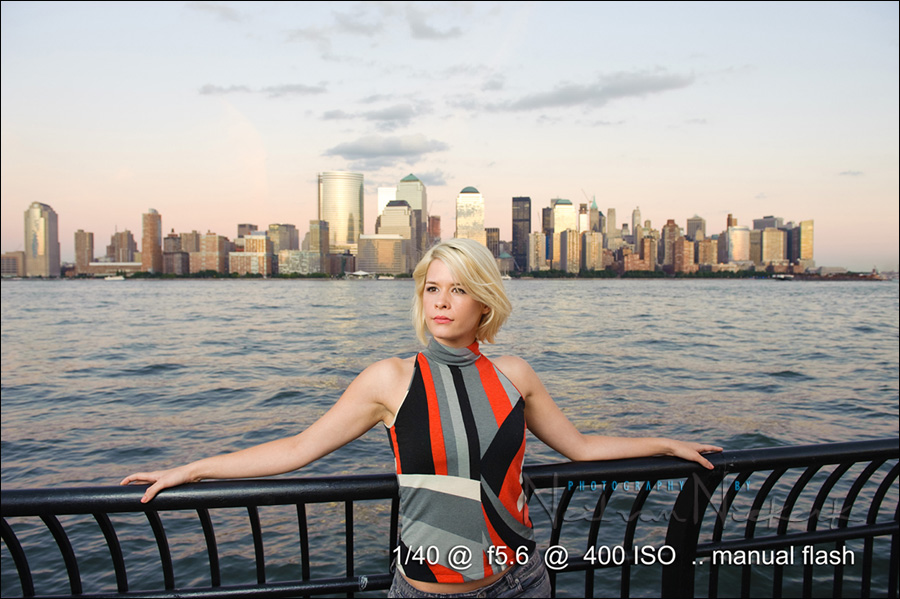 The only thing that changed between the images, was the shutter speed which I changed by 2/3rds of a stop each time.  As you will notice, the exposure for our model (lit only by manual flash), remained even.  The background however, changed in brightness, since a change of shutter speed will affect our ambient exposure.

At some point, in continually lowering our shutter speed, we do reach a stage where the ambient light does register for our subject.  In the images where our settings were such that our subject is under-exposed, we could effectively use flash to bring the exposure for our subject up to a correct level.

As an aside – “correct exposure” for our background is a matter of taste as this point.  It becomes an individual decision as to which you prefer and with that, there is a fair amount of leeway as to what could be considered to be “correct exposure”.

This technique of using a slower shutter speed to allow ambient light to register more and more, is usually called “dragging the shutter.”  With this, you’d use your camera’s light meter like you normally would .. but instead of using it to expose perfectly for just the ambient light, now you use it as a guideline as to how much ambient light you would like to register.  Somewhere around 1.5 to 2 stops under-exposure will still give you enough detail in the background – and then you use flash as your main light source, and use the light from your flash to expose correctly for your subject.

TTL flash is a different beast altogether than manual flash.  With manual flash you had the 4 controls for flash exposure – aperture, ISO, distance and power.   With TTL flash however, none of those have an influence (within reason) on flash exposure.  Your camera & flash will follow our chosen aperture and iso combination (and change in distance), and give you what it deems to be correct exposure, by adjusting the output (ie, power) from your flashgun.

This implies that we can now use aperture and ISO and shutter speed – all three controls – to control available light, without having an influence on our flash exposure.  (Of course, common sense needs to be applied here with your settings.  You can only squeeze so much light out of your flashgun.)

With manual flash, if you decided to change any of your settings (aperture / ISO / distance / power), you would’ve had to juggle something else to still keep correct exposure.  In other words, if you were at f5.6 and wanted f2.8 for shallower depth of field, you’d have to change one or more of the other settings accordingly maintain correct exposure for manual flash.  But if you changed your aperture, this would then affect ambient exposure too, and you’d have to adjust the shutter speed and / or ISO accordingly.

So with manual flash, changing any of the 4 controls / settings, will have a knock-on effect and you’d have to adjust something else again. However, with TTL flash, if you decided to change your aperture to control your available light, then (in theory at least), your TTL flash exposure will remain the same .. since your camera and flash would still give you (what it deems to be) correct exposure.  The same goes for ISO and distance.  These settings in effect become transparent to TTL flash exposure.

So now with TTL flash, if you wanted the same effect – allowing more available light in – you need not resort to a slower shutter speed.  You could as easily change your aperture or ISO to allow ambient light to register.  Here’s an example: 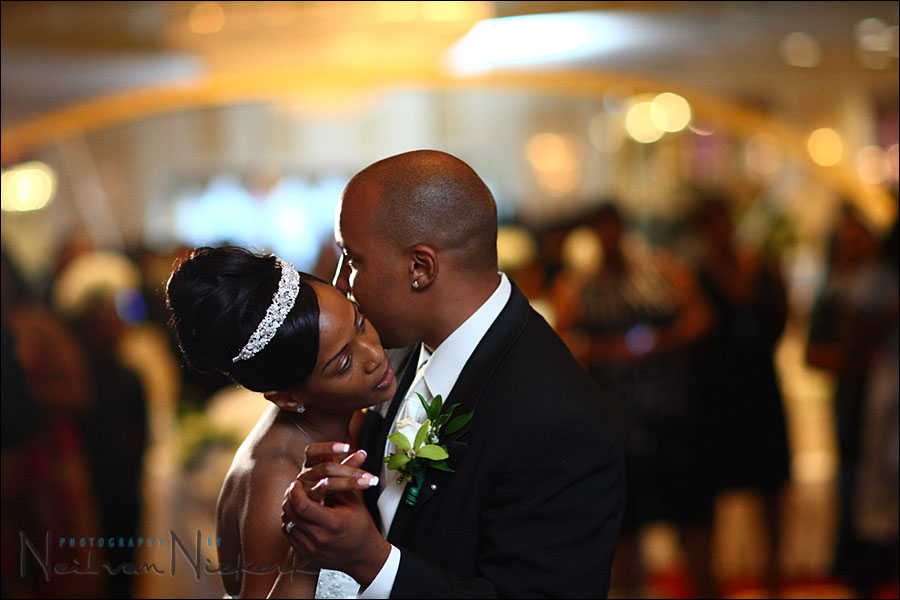 Here I allowed the background to register by choosing a fast aperture and a high ISO … as opposed to the traditional choice of lowering my shutter speed.  This freedom comes from TTL flash exposure’s ability to follow my settings and adjust accordingly to give me correct exposure.  (or close enough to correct for me to just use flash exposure compensation to nudge the flash exposure where I want it.)

With these examples, it should be clear that there is a fundamental difference in how you’d approach the ever-interesting challenge of balancing flash with available light.

I’ve seen some photographers give advice like “shoot at 1/8th sec @ f5.6” .. but that kind of advice about exact settings is misleading, since every situation is different.

The actual shutter speed chosen will depend on circumstance and the effect that you want,
– and the amount of ambient light that is available,
– and whether you have a tripod,
– or can shoot with a steady hand at slow shutter speeds,
– and the f-stop chosen,
– and whether you can bump up the ISO to allow more ambient light in,
– and how much subject movement there will be, or you will find acceptable.

There are a number of interlinked factors here that you balance out depending on the scenario. But in the end, the photograph where the flash and ambient light is balanced by using an appropriate shutter speed, just looks so much better in comparison to a photo where the flash light completely dominates.

When you add flash to ambient light, don’t you over-expose the subject?

Speaking very broadly, there are two main scenarios (with any possible combination inbetween):

In the first scenario, the background is brighter than the subject, and you set your exposure to give near correct exposure for the background. Since your subject is darker than the background, they’d still be under-exposed. Then you use your flash to expose correctly for them. This is the simplest scenario.

But usually what you’d encounter is low light situations where the background and your subject have about the same kind of light on them, and would need the same exposure. So what you’d do here, is intentionally under-expose for the ambient light – around 1.5 to 2 stops – so that the ambient light registers, but doesn’t dominate. Since your subject would then still be under-exposed, you would then use your flash to expose correctly for your subject.

So by adding flash, you wouldn’t over-expose your subject, since you are pulling down your ambient exposure. You will encounter a lot of different lighting situations, but those two scenarios cover the basics.

How do you deal with slow shutter speeds?

I often get asked why the images displayed here that were taken at slow shutter speeds, still appear sharp. The reason why you don’t see (much) camera shake in those images, is that I do take care in keeping my camera steady, but there’s more at work here than just the basic technique.

The image of the piano player (and another image on a subsequent page) probably have a measure of camera shake – BUT – it is in areas which aren’t important – the background, the city lights. They are slightly out of focus anyway because of minimal depth of field.

The flash therefore freezes any camera shake, since the available light falling on my subject(s) is so low. You just wouldn’t see camera shake. Since the flash is pretty much an instantaneous burst of light, it will freeze action / camera shake.

Therefore you simply don’t see camera shake .. even though it probably does exist to some extent in the background.

next section:  How to bounce flash

75 Comments, Add Your Own