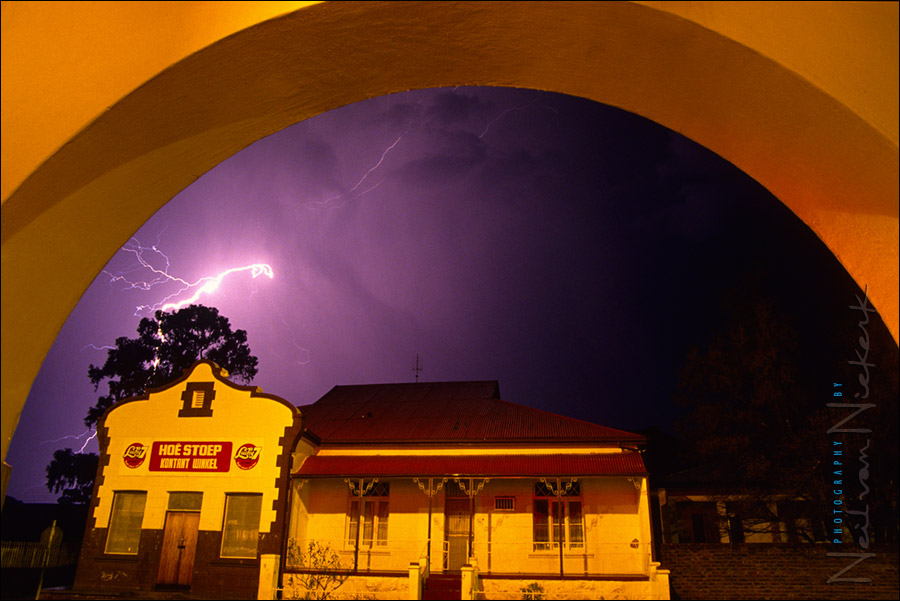 How to photograph lightning

The breathtaking sight of lightning splitting the evening sky has to be one of the more dramatic subjects to photograph… and also surprisingly easy.

A vivid burst of purple lightning over this store, framed by the arch of the veranda I was sheltering under, contrasts perfectly with the yellow cast of the artificial light. Of a series of 10 photos I took here, there were 2 usable images with lightning.  The strong color cast are from the street-lights, and having used daylight-balanced film.

How to photograph lightning storms

You might be under the impression that it takes great skill and reflexes to take the picture at the exact brief instant of the flash of lightning. Not so. Most times, you will be using a slow shutter speed in dim light, allowing the lightning to take its own photograph so to speak. The lightning flash is short-lasting, but your camera’s shutter will be open for at least a few seconds. (There are also devices available that will trigger your camera’s shutter at the very instant it detects the lightning flash.)

Since you can only anticipate where lighting will occur, you can only point your camera (on the tripod), at the approximate area of the most intense display of lightning.

Interesting foreground detail will add to the appeal of your photograph – city lights in the distance; or street lights closer up, perhaps some buildings in the picture with the lightning; lights of cars streaking by on a nearby road; or anything else to give a sense of scale and place.

Most lightning will be seen at night or in the evening when the light level is fairly low due to weather conditions.  This low ambient light will necessitate a slow shutter speed of a few seconds or up to a minute or so.  But this works to your advantage.  More time for a bolt of lightning to appear.

On 100 ISO film, an aperture of f8 should expose the lightning fairly well.  A stop or even two wider perhaps if the lightning is distant or faint due to rain.  With an aperture of f8, you need to decide on the length of exposure, and this will be determined by the ambient light or how bright the scenery is that you’re including.

In other words, you need to expose for the rest of the scene using f8 (or your chosen aperture.) How intensely the flash of lightning will record on film or digital, is controlled by the aperture and not the shutter speed. (This is similar to using flashguns on manual output.)  This is due to the short duration of the flash.  So the eventual shutter speed that you use will not dictate the lightning intensity, but only how bright the entire scene will appear in your final image. However, the shutter speed will dictate how many flashes of lightning appear on the single frame of film.

Meter for the rest of the picture in the usual way.  If, for example, you are including a street-lit building in the foreground, take a meter reading of this building or an appropriate area that you would like to expose for.

Since the lightning will not be predictable in how often and where it strikes, you will need to take a series of photos at your chosen shutter speed, to make sure you do get to record a lightning strike.

The matter of reciprocity failure with film never really bothered me in this type of photography.  With strangely colored illumination from artificial light sources, and dark areas all round, exact exposure of foreground objects is not so critical. If anything, under-exposure is far more acceptable to the eye than even slight over-exposure of night-time shots.

One of the most astounding lightning photographs I have ever seen, was one where the photographer must have used a lens around 24mm while shooting upward to catch a crazed pattern of jagged lightning overhead in a delicately tinted evening sky.  Magical! There is always something to aspire to.