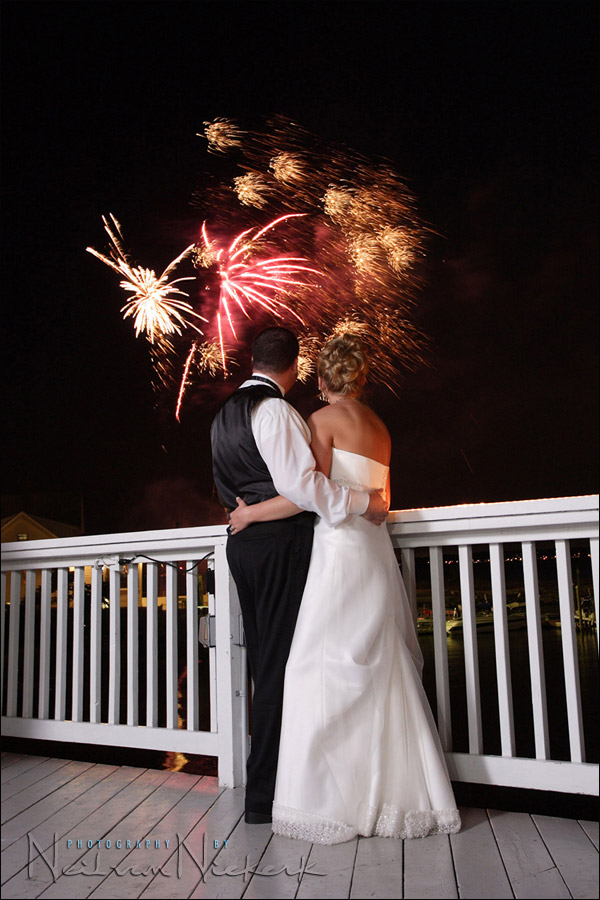 Generally, you wouldn’t use flash to photography fireworks. But when you have someone in the foreground, then it becomes useful to have your subject lit up with flash, to balance them with the background (the fireworks display.)

Photographing people with fireworks in the background, is just an application of the technique known as dragging the shutter. I had the couple in an area where there wasn’t much ambient light, so that I could light them mostly with flash. The strobe was a Quantum T2 with an umbrella, used in manual.

My flash exposure was determined in that I wanted the couple correctly exposed .. but my actual settings were dictated by my choices made in how I wanted the fireworks to register.

For my fireworks exposure, which is considered the same as ambient light,
I had to juggle the three controls again: shutter speed / aperture / ISO.

You don’t necessarily want a high ISO setting, since you do want your shutter speed to be slow. Slow enough to record the fireworks as streaks of light. There is a lot of leeway here, and a quick check of your camera’s preview will tell you whether you need to adjust your settings. Therefore your is range should be 100 to 400 ISO. Then your shutter speed is in the region of 1 second or slower. In other words, you need a tripod.

Recording multiple bursts of fireworks by blanking out the frame with a black card is a great idea. This photograph was a single exposure though. By checking my camera to see how other firework bursts recorded, I found that f6.7 @ 400 ISO @ 1 sec gave me enough firework trails and the fireworks itself weren’t over-exposed in the shot.

So using f6.7 @ 400 ISO, I set my Quantum T2 to an appropriate power level, to give me that exposure. (Manual flash in this instance, since my subject was in a specific position in relation to my strobe.)

An exposure of f4.5 @ 200 ISO @ 2 seconds, would’ve given me exactly the same exposure, but the firework trails would’ve been longer. There is a lot of leeway here, and you shouldn’t be bound by specific settings. But my suggestion would be to start at 1 second (or slower) and 400 or 20O ISO, then then chimp to taste.

Note that rear-curtain sync would not have had any effect here, since the couple was static in the frame.