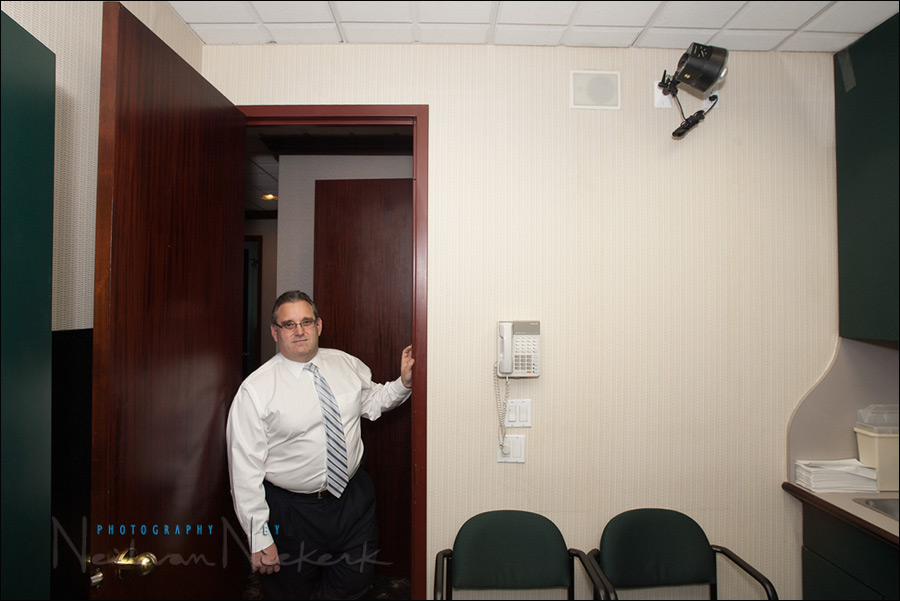 I received an email from Dr. Joel Studin in April ’06, where he asked for help in setting up photographic lighting in his examination room at his offices.

Dr. Studin is a renowned cosmetic surgeon based in Long Island, NY and he needs to do specific ‘before’ and ‘after’ photographs of his patients for his records.

But there was a problem – despite guidelines from the plastic surgery society on standardizing photography, the results weren’t consistent, and just didn’t look good.

Fortunately, I was able to help him by applying a few lighting techniques, changes to his camera settings, and some unexpected inspiration …

Typical of doctor’s offices, the consulting rooms have limited space, and there just isn’t room to have a dedicated studio area to take the photos of patients. Who can spare the added expense of that anyway? So one of the small consulting rooms have to double up as the area where the photographs are taken, with two studio flash-heads mounted high on the wall.

The photograph at the top will give you a sense of scale. That’s Dr. Studin in the doorway there. As you can see from the photographs, there isn’t much room from corner to corner. The studio flash-head can be seen mounted up against the wall. The other studio flash-head is mounted in the same spot on the opposite wall.

A patient to be photographed would stand in the spot behind the door, obviously with the door closed, and a black board behind them as a background.

As an example, Dr. Joel Studin stood in for the ‘before’ and ‘after shots. Here the before and after photos will show how poor the lighting looked ‘before’, and how the lighting improved ‘after’ a few changes in settings, set-up and technique. 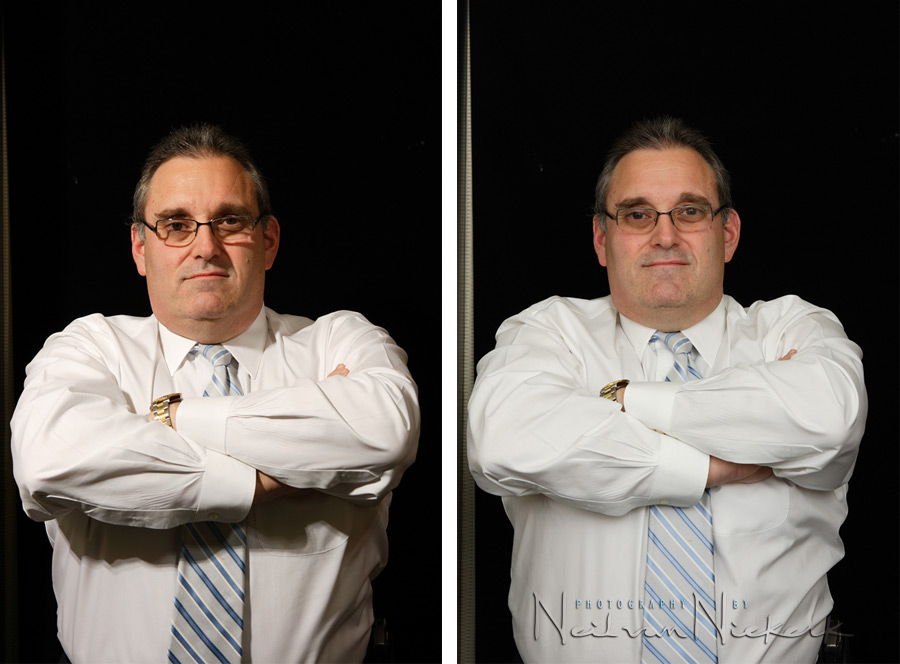 .
Dr. Joel Studin isn’t really as formidable as he might look there with his arms folded. (He is actually one of the nicest guys I’ve met.) The idea with folding his arms like that, was to show how hard the shadows looked on someone’s body when they were photographed.

The ‘after’ photograph shows how the lighting was improved. Even lighting from left to right, and top to bottom, with gentle shadows which won’t hide detail, but still show some form to the subject.

If you look at this photograph again, you might already figure out what most of the improved results revolved around – changing the direction of the flash-head. But we’re jumping ahead of ourselves now. Let’s go step-by-step how we improved the lighting in this small room …

Three problems can already be seen in where the flash is mounted:

– the height of the flash from the floor will cause light fall-off from top to bottom. ie, the light will be top-heavy.

– the short distance from the flash to the subject means that the light fall-off will be even more noticeable. The subject’s head will be over-exposed, and area around the abdomen will have less light falling there.

– the flash isn’t diffused. This will cause glare on foreheads, and hard shadows.

There is an inescapable axiom with regards to lighting :
the larger your light source (in relation to your subject), the softer the light will be.

I had to figure out a way of softening the light. And I had to find a way of diffusing those flash-heads or spreading the light. But, there really was NO room to add umbrellas or any device to soften the light.

I thought of turning the flash-heads around to point backwards, but bouncing light behind us wasn’t an immediately obvious solution, because of the dark green color of the cupboards: Holy cow! The insides of the cupboards where white! Problem solved!

We’ll turn the lights around, and just open the cupboards every time someone had to be photographed in that room. Simple! And it is no fuss at all. It would take mere seconds to do this. And when they are done with the photography, they will just close the cupboards.

– the light source is now lower than before. This should be immediately obvious from the photo. Remember geometry and science classes from your school days?
Angle of incidence = angle of reflectance.
Instead of the light source being the flash-heads mounted high above, the light sources are now the areas that the flash is bounced from. And that is lower than the flash.

If you look at the right-hand photo of Dr. Studin, you’ll see how even the light is. It was done with this basic set-up. The colored items on the cupboard are too small and evenly dispersed to affect the white balance in any noticeable way.

We changed to a higher shutter speed to avoid ambient light affecting us. Have a look at the photograph to the right.This was taken with a slow shutter speed, and suddenly the ambient light is affecting exposure, and we get a very top-heavy light again. We need to be rid of that. Shooting at 1/200th of a second side-stepped that problem.

We also changed the camera to the lowest ISO, to get the best image quality. Manual exposure mode, of course.

And from that, we figured out exact exposure settings to keep everything consistent.

White Balance was set to Daylight. Most studio strobes are balanced for daylight, and a Daylight WB setting will give accurate colors. We then fine-tuned the white balance in-camera to give even better skin tones. The solution was pretty simple in the end. It just took a small leap in imagination to solve this problem.

The only downside to this set-up is that Dr. Studin will now have to make sure one of his staff members keep the cupboards neatly packed at all times. But I think that is a small sacrifice to pay for greatly improving the lighting set-up in his consulting rooms.

And the beauty of this solution is that it took up NO more space than it did before – there were no additional pieces of equipment to clutter the room, and no additional expenses. All it took was the application of some fundamental concepts in photography and photographic lighting.