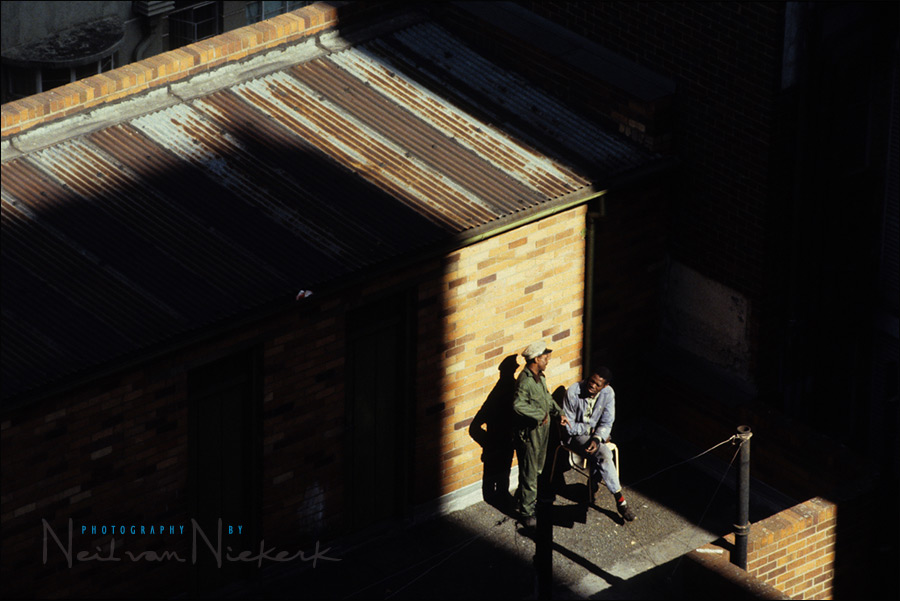 For any other practical situation, I find it frustrating to try and use exposure compensation with in-camera metering. Let me explain again with a previous photograph ..

The men in this photo are my subjects, not the dark areas. So depending on the actual composition I chose or how much I zoomed in or out, I would have had to set different exposure compensation for EACH composition. This is because the amount of dark areas in the frame would vary dramatically each time for differing compositions – affecting my camera’s light meter differently each time – yet I would want to maintain the proper exposure of my real subject.

The crucial thing to realise here is that even though my camera’s meter reading will change as I zoom in and out, the exposure that I correctly calculated for my subject – the two men – won’t change. (Unless the lighting should change, eg. clouds passing overhead. But then I would need to take a meter reading again in the same way as described before.)

Also, how much exposure compensation would I have had to dial in for each shot? I would only be able to decide on that if I metered for the 2 men anyway, and then compared that reading to the overall reading I’m getting now when I have recomposed the image in the viewfinder. So if I had tried to use exposure compensation, I would have had to twiddle buttons or dials for so much time, that taking a photo in this instance would have taken me far too long. This is no problem if you are photographing a cactus in the desert which isn’t going to go anywhere for the next couple of decades, but for non-static subjects like people, using exposure compensation like this is just too slow. You could quite likely miss the actual opportunity while bracketing or setting exposure compensation.

next:  More articles about Exposure Metering