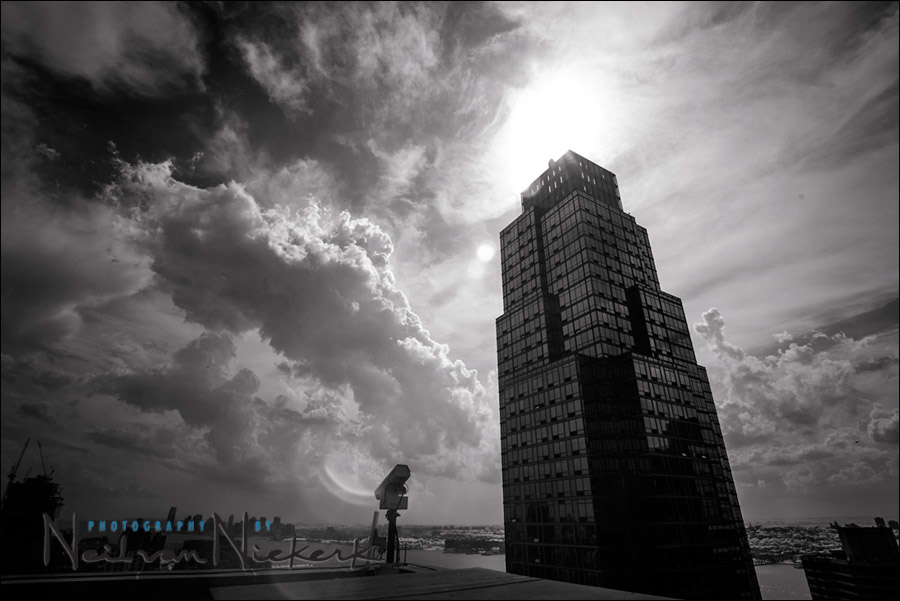 After a long hard winter and a slow warming up to summer (and a busy schedule), I finally squeezed some time to wander around New York City again with an infra-red B&W camera. I tried it out once during winter, but it just didn’t work – without the sun and without heat, the images were dull and flat. Nothing there. Infra-red B&W needs bright light and contrast.

Infra-red B&W photography seems dominated by landscapes where the trees and grass turn white, and the skies darker. But what I like about using this camera in an urban setting, is that you are often surprised by the unexpected. Some areas which are brightly painted, turn out a dull grey – there’s just not enough contrast in the infra-red range. Other times, you have hot spots that flare, and odd pools of light that shape – especially with light reflected off the tall glass buildings in New York.

The image above is a roof-top view from the West side, looking South-West towards the Hudson River and New Jersey. I moved until I could partially hide the sun behind the building for just enough flare. The extreme wide-angle view with the Canon EF 16-35mm f/4L IS (affiliate) at 16mm, expanded this scene to include the dramatic sky.

Here’s a selection of the other images that also worked particularly well: 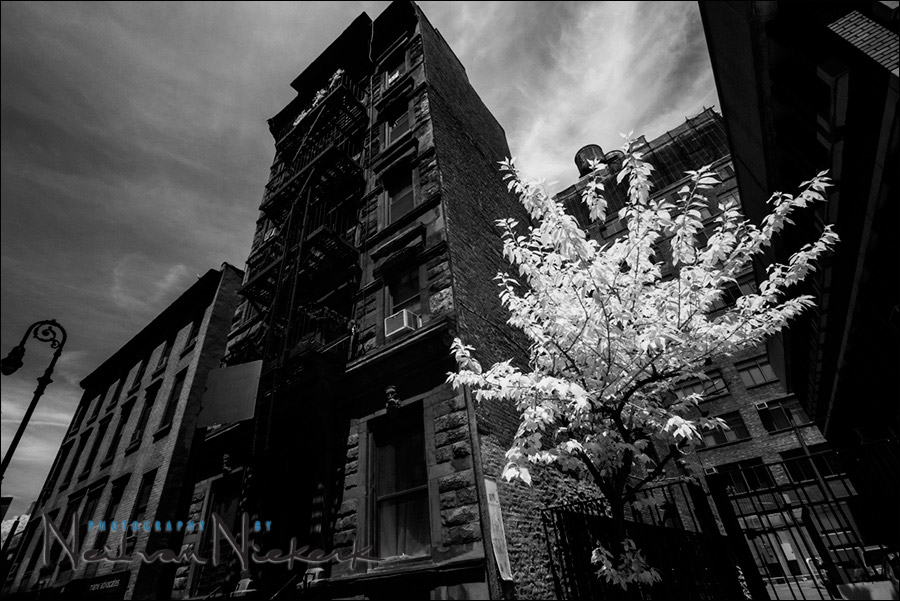 The building cascades were lit by the sun from above, and being dark in tone, went nearly black in this photo. The single tree of course went to white, as did the wispy clouds. 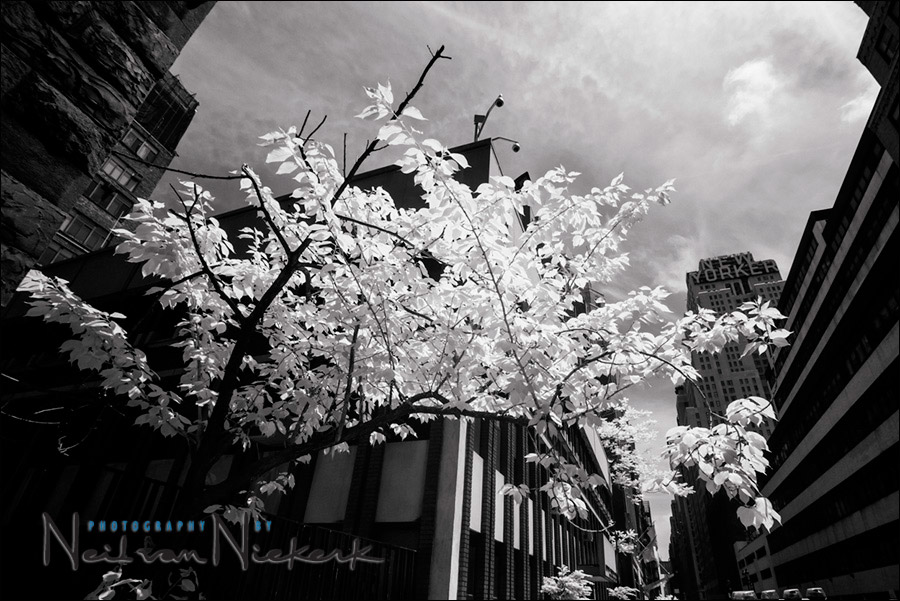 The same tree, but shot along the street view. The same reasons as above will explain why this image has such punchy contrast – along with pushing the Contrast slider way high in Lightroom. 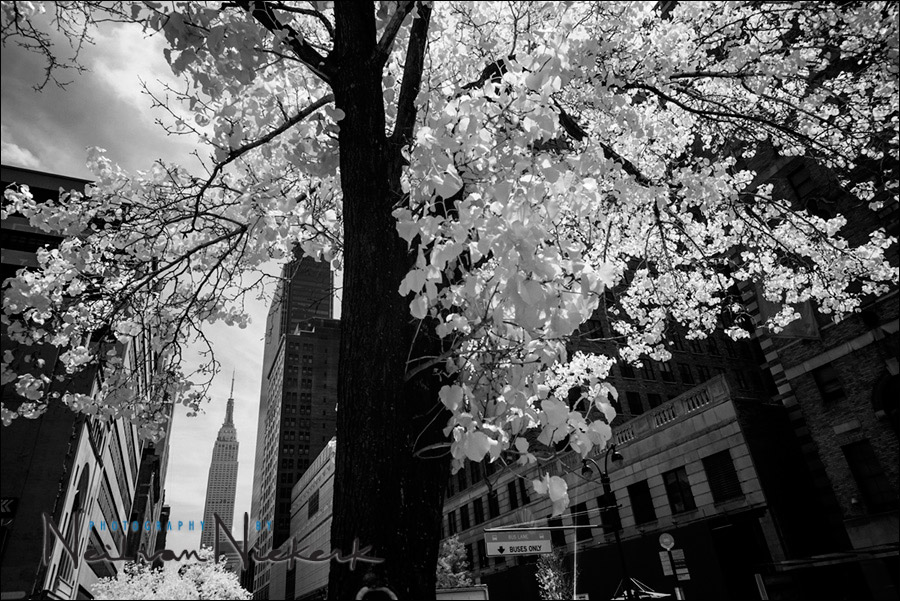 One of the landmark buildings in New York that is instantly recognizable – the Empire State Building. 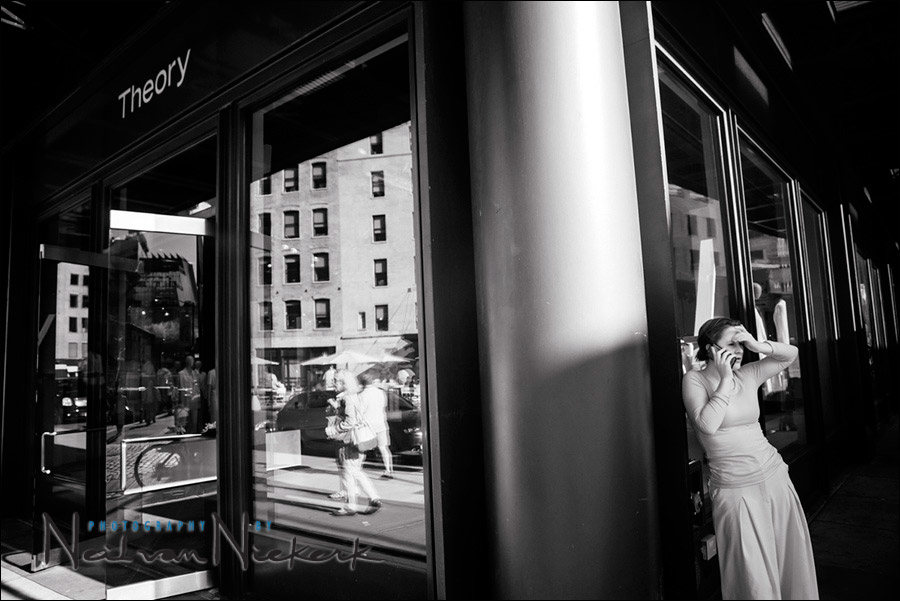 This street scene in the Meatpacking District was shot kinda off-hand as a test as I walked by – and it worked! Because the infra-red B&W is so unpredictable, I shoot many images as quick test shots before I further explore the composition and potential of the scene. I really like this image for the interesting balance to it. 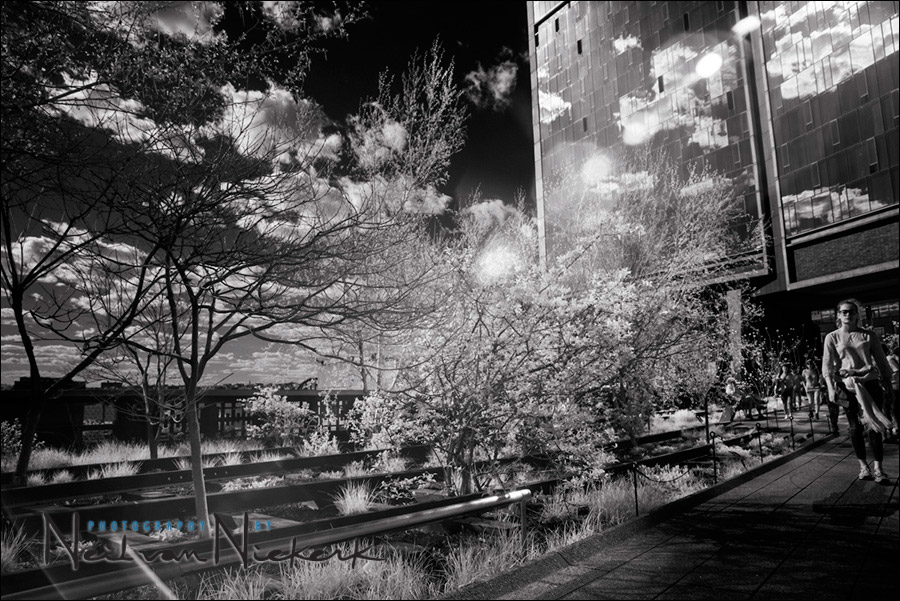 The High Line in New York – the elevated walk-way that was created by renovating the original rail-tracks that fed the industrial part of New York City. 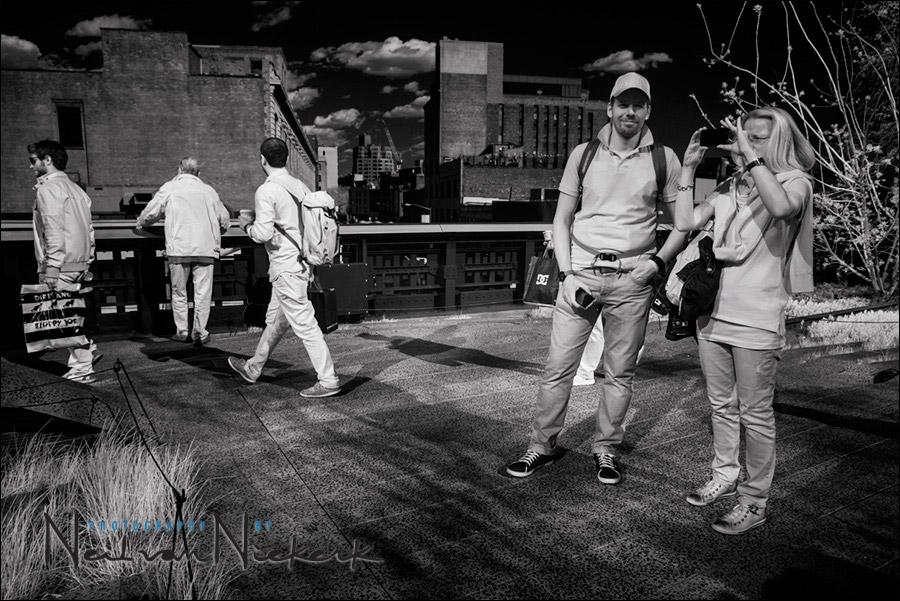 Tourists on the High Line. Pulling the exposure down in post-processing the RAW file so that the skin tones looked more normal, the rest of the scene went very dark. (Skin reflects a lot of infra-red.) I remember the couple on the right had blue shirts on – this too went to white. 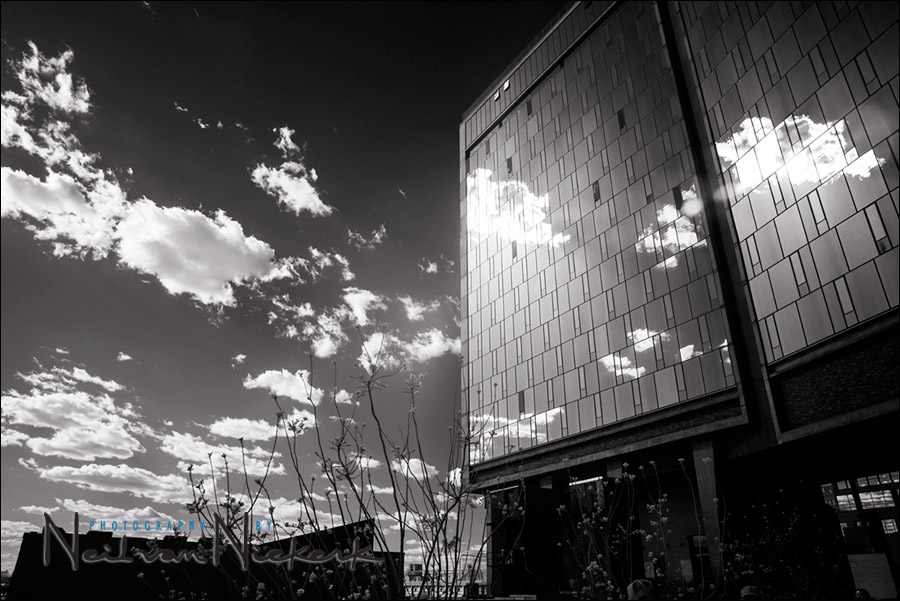 The Standard Hotel, as seen from The High Line. 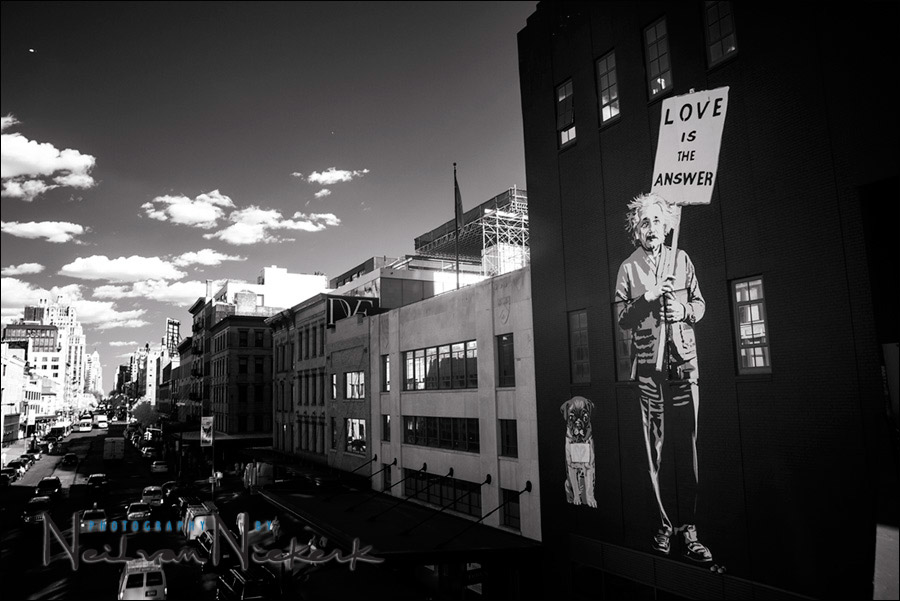 Another city scene from one of the viewpoints along The High Line. I had to bring Einstein up by +1 stop Exposure via Local Correction Brush in Lightroom. 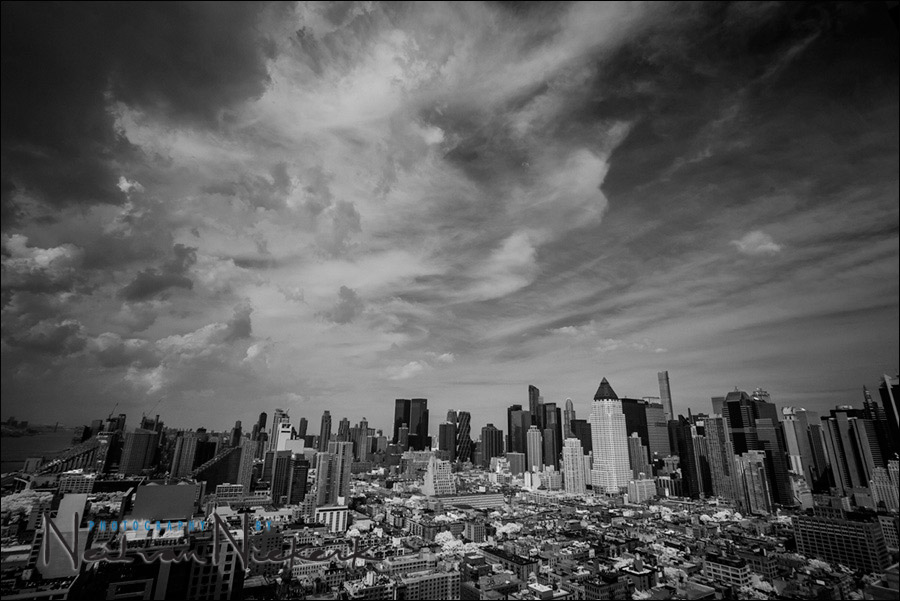 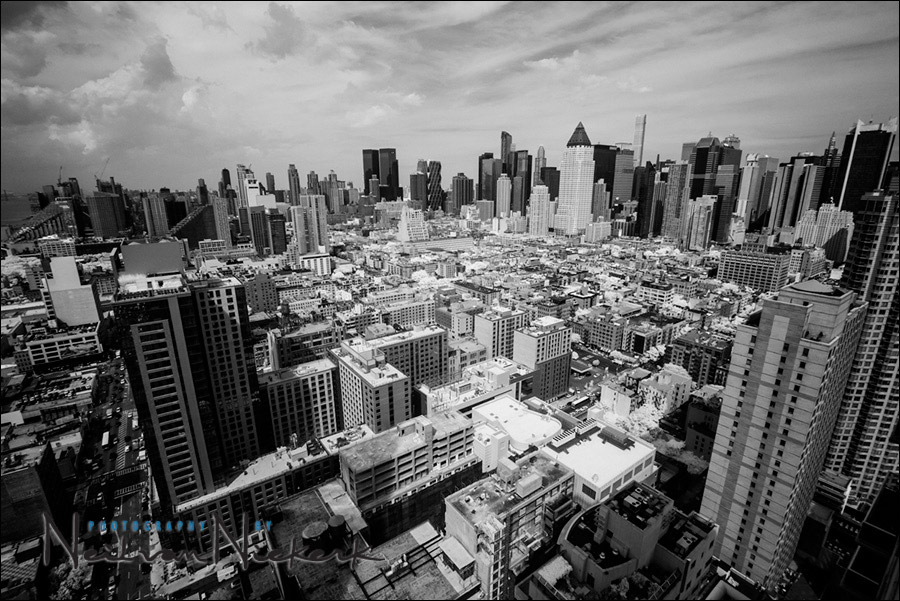 Lacking the usual reference points (such as green foliage going to white) which would show that a photo is actually infra-red B&W, these two photographs of New York look more like regular B&W images. 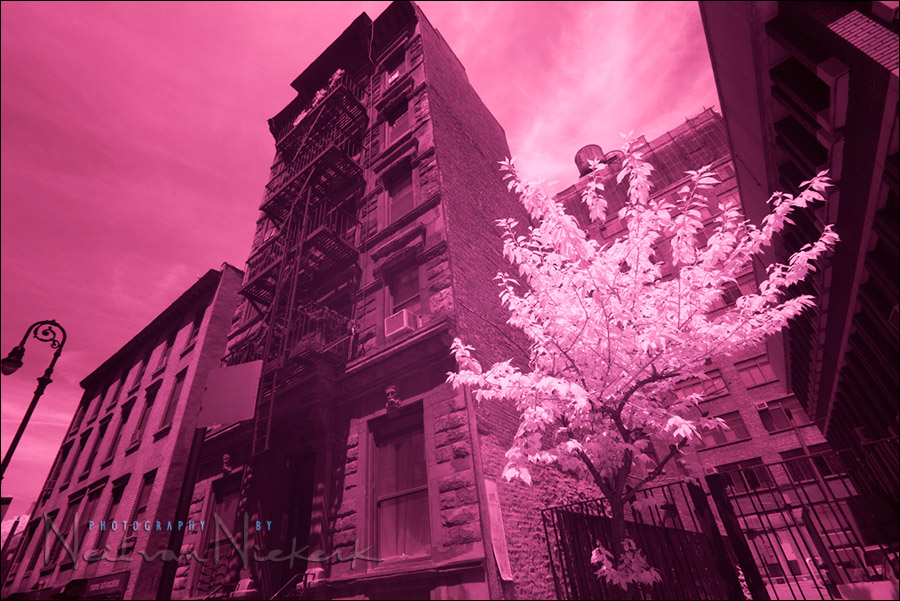 The images straight out of this infra-red B&W camera have that overall Magenta coloration to it. When I use the camera, I have the Picture Style set to Monochrome, with the Contrast jacked up high. This gives me a much better idea of the potential of the infra-red B&W scene, than a Standard Picture Style would have.

In the end, I always adjust each RAW file individually – pushing the Contrast; pulling the Whites; bumping the Clarity higher. Of course, I pull the Saturation down to zero so that the image is B&W. Then I also adjust the Exposure as necessary. Whatever is needed to make the photograph more punchy and eye-catching.