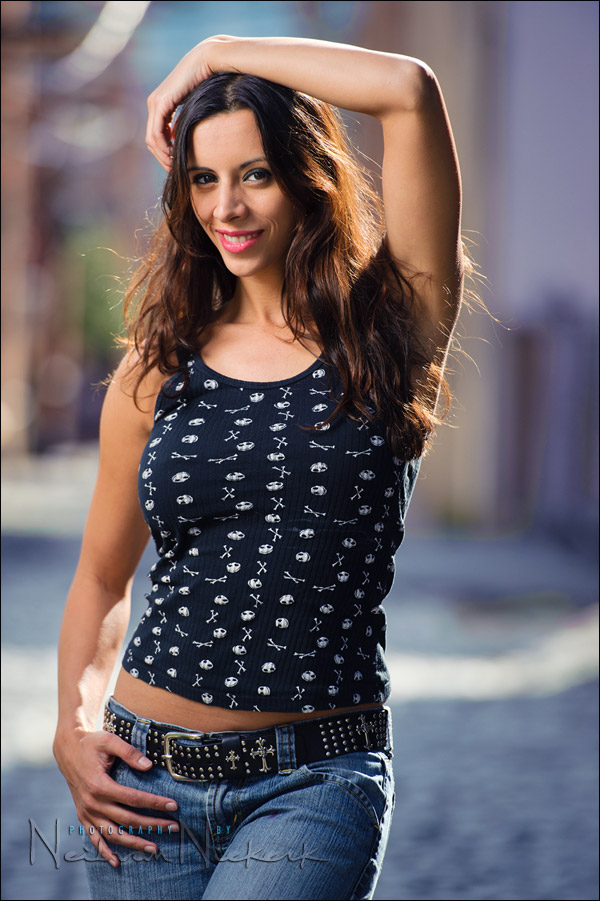 Photographing a model in Hoboken can be complicated. A few weeks ago in October, a friend and I arranged to photograph Kerri, the model shown here. My friend had just bought a Nikon D3s and some serious glass, so I thought that instead of me just telling her about the camera’s functions and settings, it would be more interesting to hire a model to photograph. Then we get to play with the new toys, and get some photos. More fun than just being lectured by me.

So the two of us picked Kerri up along the way to Hoboken, to shoot there. Why Hoboken? I struggle with this question every time that I hit the traffic going into the helix at the Lincoln Tunnel. I hate the traffic by now. And then the traffic in Hoboken is just as bad. But I like photographing in Hoboken. There is a lot of variety to work with. There is the Hoboken waterfront with New York as the backdrop. You have urban areas, but you can make it look park-like by turning your camera the other way. There is the train station nearby, and two blocks up there is a long stretched-out alleyway.  So I can’t think of any other place really in New Jersey that offers that diversity within a few blocks … and have parking garages available.

At some point we ended up in the (very well-known) alley in Hoboken, photographing Kerri. My usual off-camera lighting setup at the moment is a medium sized softbox, held up by a monopod by an assistant, or in this case, my friend. It keeps everything mobile and fluid. In particular, another reason why I use the softbox on a monopod, is that I often shoot in Manhattan. The New York City Hall has clear instruction as to when you need a photography permit, and when you don’t. If you don’t use a tripod or light-stand while shooting in New York, you don’t need the photo permit. Great! But we’re in Hoboken in New Jersey.  And this is where it gets complicated …

The photo of Kerri you see at the top, is the last photo I took of her before a police officer stopped us. He asked me if I had a permit to photograph there. I replied that I wasn’t aware that we needed a permit. He then sternly informed me that in fact we do, and that we should get one from Hoboken City Hall. Then he added, “Not only don’t you have a permit; to add insult to injury, you are photographing behind the police station.”

Of course, I couldn’t resist asking him the obvious question – why would it be an insult to photograph a beautiful woman? Or an injury?

Anyway … we moved along, a block or so further up the alley, and continued.

Now, my feelings on this matter is that if we’re not supposed to photograph in the alley near the cop station – and it isn’t immediately obvious this is the back-end of a cop station – then there should be signs. Or if the model did somehow perturb the officers in the cop station, he should’ve asked us to move along. But to tell us to stop photographing and that we needed a permit?  Throwing dubious legalities at us … weeeell, I’m less than happy about that.

If any police officer can stop a photographer in Hoboken at any point and interrupt or halt a photo shoot, then it is a real problem for the photographer when he has paid money for the model, or is photographing paying clients there. It’s just not a tenable situation in front of clients, or while working. Or even just when having fun with a camera.

Afterwards, I did some searching on the internet to find out about any specific rules & regulations, and couldn’t find much. Certainly nothing as definitive as the instructions from the New York City Hall.

The Hoboken City Hall website looks sweet and friendly enough, and had this information on the topic of “filming permits”:  (I snipped two sentences for simplicity here.)

To obtain a film permit you must first contact the Hoboken Police Department. {snip}   The Police Department will explain city rules and the requirements for filming and location of vehicles, equipment, and traffic regulations. The completed application must be returned to the City Clerk at least 3 days (72 Hours) prior to the scheduled filming dates. {snip}  Upon issuance of the film permit by the Clerk’s office there will be a $700.00 fee (as of 4/12/10) due and payable to the City of Hoboken.

But when is a permit necessary? The cops will tell you.

With a further search I did find a related article on a different website, which even has a download to what looks like an official document – Chapter 97. I’m not sure how up to date it is, but that document, Chapter 97, is precise about when you do need a permit .. but vague as to when you don’t need one.

It does mention that:
“Incidental use of a public street or sidewalk which is of minimal impact and does not result in a closing of same to public use shall not be considered filming on “public land.”

And I do believe that what we were doing was ‘incidental use’, and we certainly didn’t close the alley. We neatly stepped aside for the occasional vehicle that might come past. The alley is cobble-stone, so it isn’t as if any car can drive at speed down the alley. You’d kill your car’s suspension! So what we have are occasional slow-moving cars crawling through the alley. And as I mentioned, we had our cameras and a hand-held softbox, very aware that we need to keep things mobile. So with that, I think what we were doing “shall not be considered filming on public land.”

My online search also found this guy, who has a particularly strong opinion about a similar incident.

I did go to Hoboken City Hall the next week, and inquired about the stipulations about when photography permits are needed.

The clerk there immediately referred me to a contact person at the Hoboken police station who deals with this specifically. Off I went to the police station. Incidentally, this is the same police officer who stopped me from shooting originally. We recognized each other. Chatting to him about all this, he seemed a nice enough guy. He admitted the regulations were vague, even in attempting to explain them to me. He said he would find the proper municipal codes for me, and would call me back. And if I then need further clarity, he mentioned the possibility of me taking this to a council meeting at some point if there is no specific guideline or resolution. Of course, I never got a call back.

So where does this leave any photographer working and shooting in Hoboken?

I’m thinking specifically of portrait and wedding photographers here. At any time of day you’re quite likely to see a photographer shooting out on the streets in Hoboken. Lots of us. It’s an epidemic really.

Where does this leave us? I honestly don’t think that the regulations about “filming” apply to us as photographers with a camera or two slung around our shoulders. We’re not part of an entire film or TV crew which are set up for hours or days in a location. And that is why I don’t think I will hear back about the specific rules. I doubt the rules are specific enough in this regard to include us. There is of course the potential downside that any regulations that do exist, might be vague enough to be construed to actually include us. We don’t know … and this leaves us open to be stopped by police officers.  Unless of course any photographer is inclined to spend time chasing this through a city council meeting.

Anyway, I can’t think of any wedding photographer that could afford to pay a $700 permit out of a wedding package. It would be insane (yes, my specific word choice) to force every photographer with professional equipment, to pay the $700 fee for a permit every time they want to photograph a model or an engagement session or wedding party there.

Also, another way to look at it:  if the Hoboken City council could make $500 a pop off every photographer they accosted and fined, then they would. Easy money.  They could clear a few thousand dollars every day with this. That they don’t … is most likely because it isn’t illegal to photograph on the streets of Hoboken. Despite what any other cop might say on the street.

The thing is, if such laws do exist to restrict the average working photographer, then dozens of photographers will have to be stopped every day. Brides wouldn’t have their photographs taken at the waterfront in Hoboken without a permit. No portraits of couples without a permit. Anyone using A Big Camera would have to be checked. You can slice this down to absurd levels … at which point is someone with a camera not a professional photographer?

So finally, where does this leave me? Nowhere really. Just frustrated that at any time in the future I could have a cop in Hoboken stop a photo session. But I’ll just continue as I always have. The potential $500 fine is cheaper than the $700 permit, and probably faster to pay.

45 Comments, Add Your Own