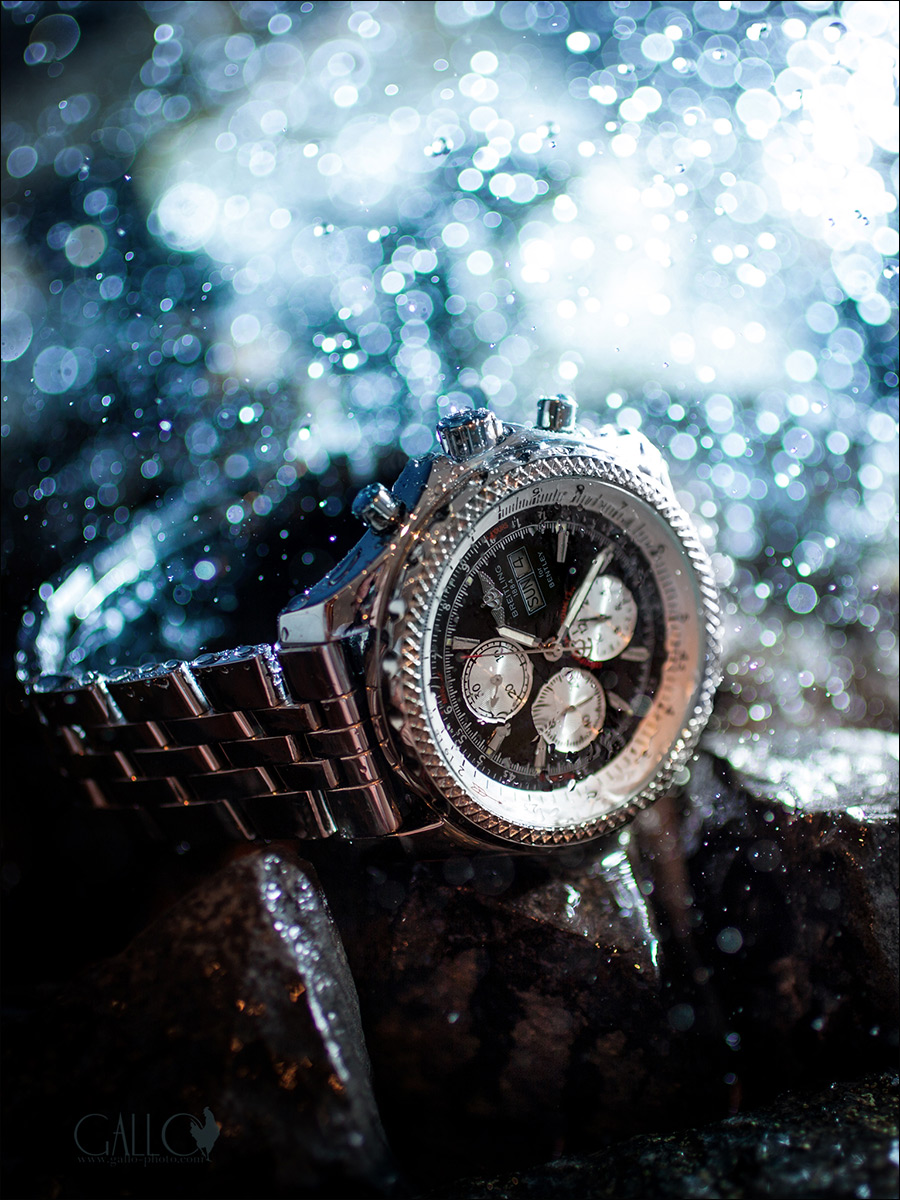 Tilo Gockel’s photography on his website and in the Strobist FB group, always impresses. You also might know him as the author of superb books on flash photography. He is always pushing his own boundaries, coming up with images that surprise. From photograph of models, to the latest – product photography that excels. Tilo was kind enough to expand on the image, and explain how he set it up.

Hi everyone, I feel very honored that Neil invited me again to write a guest post for the famous Tangents blog. So here we go, and I hope you’ll enjoy it!

I like shooting small objects and I like to try to make them look fresh and cool. Usually, something with flares, blur and backlight and lots of bokeh bubbles is the outcome. :-)

The Idea for “Diver’s Chronograph”
For the watch at hand I thought about a setup, that would deliver a shot that really sparkles, and I knew––from other experiments––that water splashes, frozen via flash and shot with a wide aperture, can look really interesting. For a nice basis I collected some stones from a near railway track (don’t tell them) and arranged them on a board on our bathtub. To get a dark background, I added some dark pieces of foam rubber and a darkblue blanket. 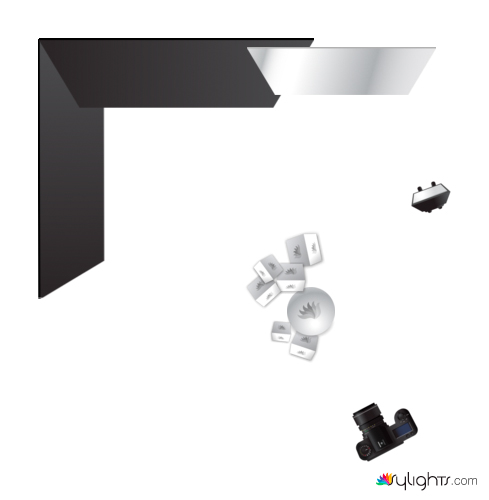 Regarding the light I tried the Honl Traveller 8, but the result was simply too boring. It totally lacked that punch and backlit feeling and “that lots of light everywhere” mood I was after. So again, I ended up using bounce flash, as learned from Neil and his two great books.
The setup is as simple as can be: It consists of a dark background to shoot against, that makes the bright bokeh bubbles perfectly visible, and a piece of crinkled aluminium foil to bounce the flash off.

I packed one of my YN-560 flashes equipped with a RF-602 transmitter in a freezer bag and mounted it on a coldshoe, on a lightstand. The light direction was chosen in a way, that there was just enough backlight and flare, but not too much. That took some adjustments and perhaps something like 15 test shots. 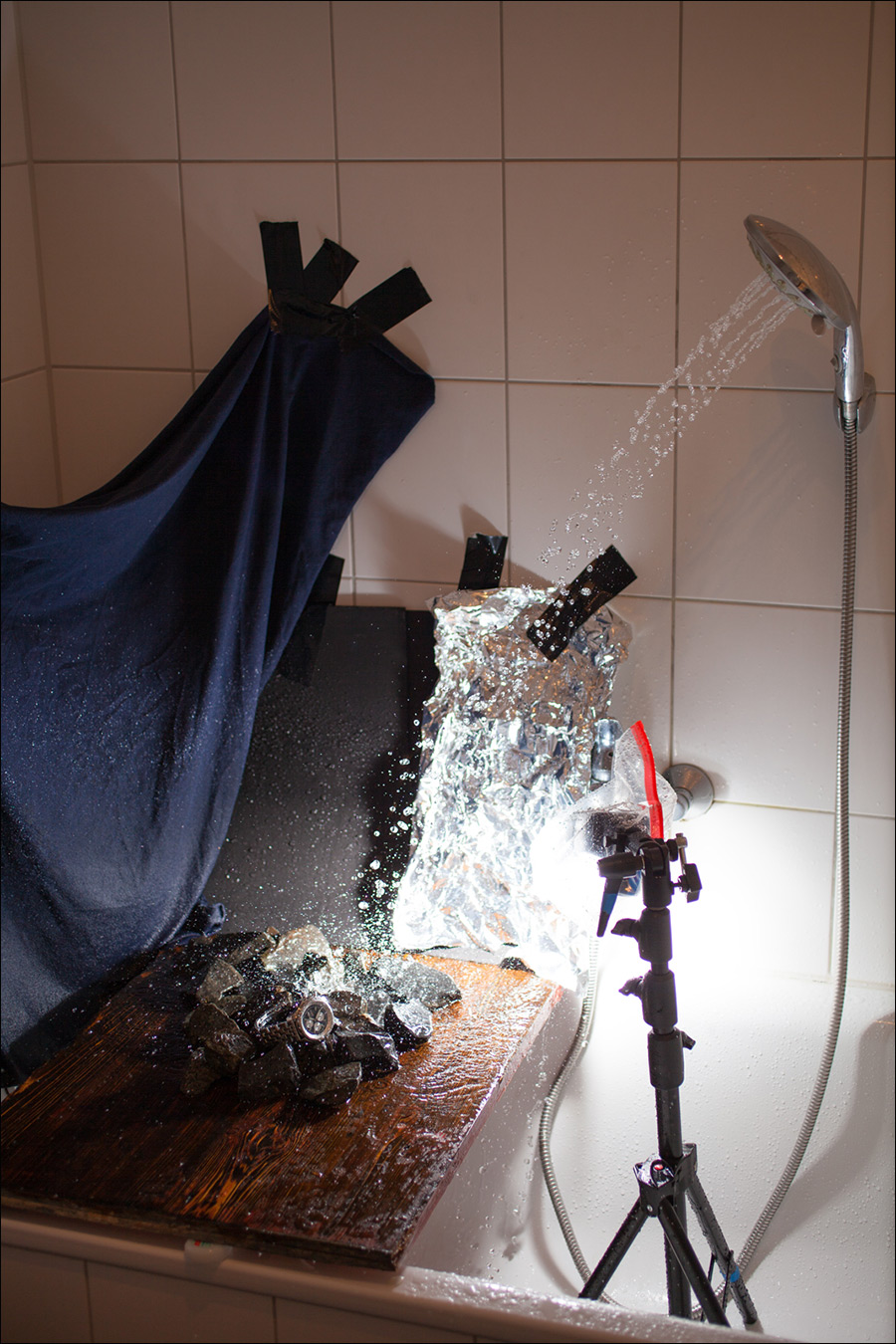 Once everything was in place, the rest was a piece of cake: Turn on the shower and shoot and then wipe the camera and the watch dry again and then repeat. :-)

STROBIST: Just one bare flash YN-560, in a plastic bag, shooting against a crinkled piece of tinfoil in the background.

Notes and Tips and Tricks

Regarding Photoshop: In between the splash shots I also captured some clean shots from the watch (perpendicular to the watch, so everything is in focus). So I had a clean brand name and logo, and so I was able to insert that clean logo (the “Breitling” writing and the date and the little wings) later in the shot. In my eyes it is important to keep the logo and brand name clearly recogniceable and readable. I also did a double raw conversion in Adobe Camera Raw, first for the background (blueish, contrasty, edgy) and second for the wristwatch (a bit warmer, a tiny bit softer) and blended these two layers with a mask. 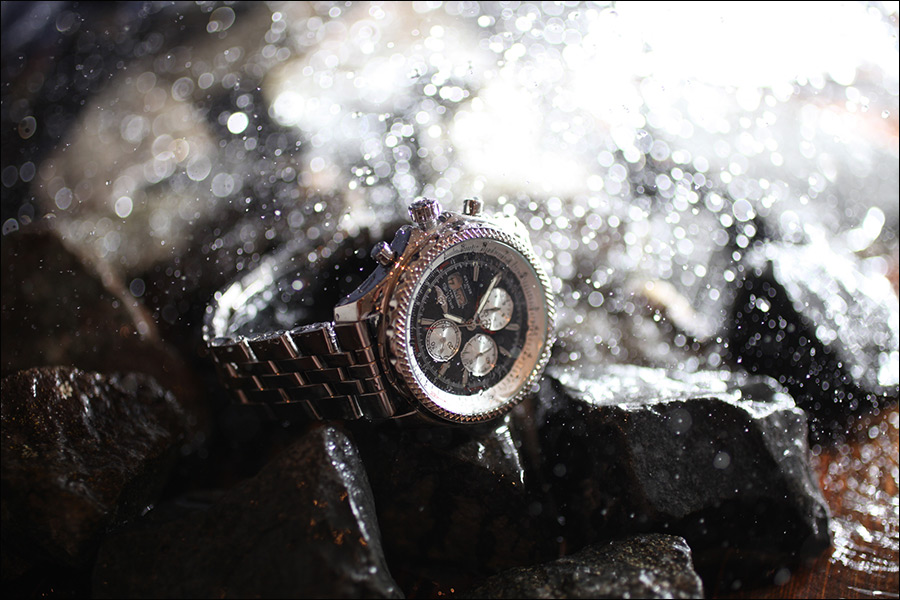 The original shot, straight out of camera 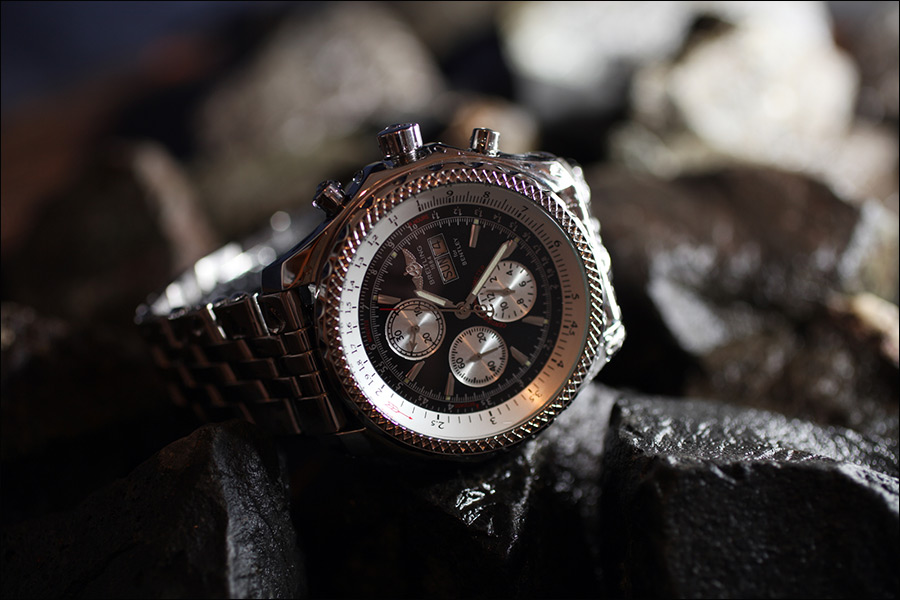 A shot without splashes, to extract the logo and the writing.

I don’t like tripods that much, and also it was not necessary here, because the flash freezes the action anyway. If you want to shoot something similar, then try lots of different shooting angles, to get, hopefully, one shot with the right amount of backlight and flares. You can try varying your camera’s angle and also the angle of the flash. 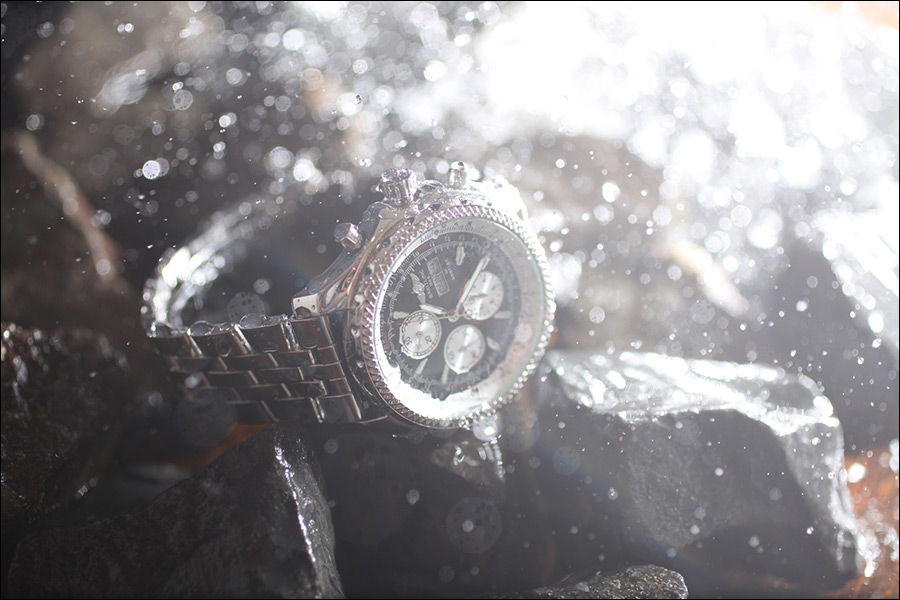 A shot with too much backlight and flares in it. The right amount needs some experimenting!

I set the watch on a time, where the fingers form a nice smiling face and then pulled out the knob to stop the movement. With Photoshop, I shifted that knob back in later in the post processing.

To pack that flash waterproof, I put in a freezer bag and fixated it on the lightstand using a coldshoe––this actually worked and there was not one single drop on the flash. The coldshoe clamps the flash together with the bag around without destroying the bag.

This was shot using the EF 50 f/2.5 Compact macro and that is, afaik, the cheapest lens, which is Canon CPS certificated! Also it is a lens, which I really like a lot, because it is so small, lightweight and versatile. 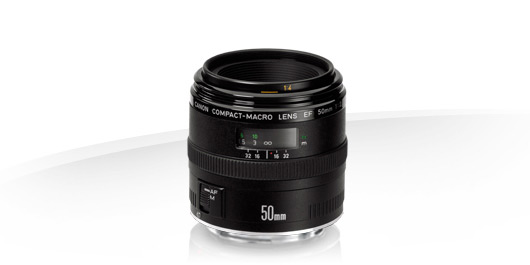 And then, of course, this type of splash shots do not work only with watches, but for example also for fruits and veggies. So if you are looking for a food shot setup, that lets your radishes really sparkle, this could be a simple and cheap way to realize that! :-) 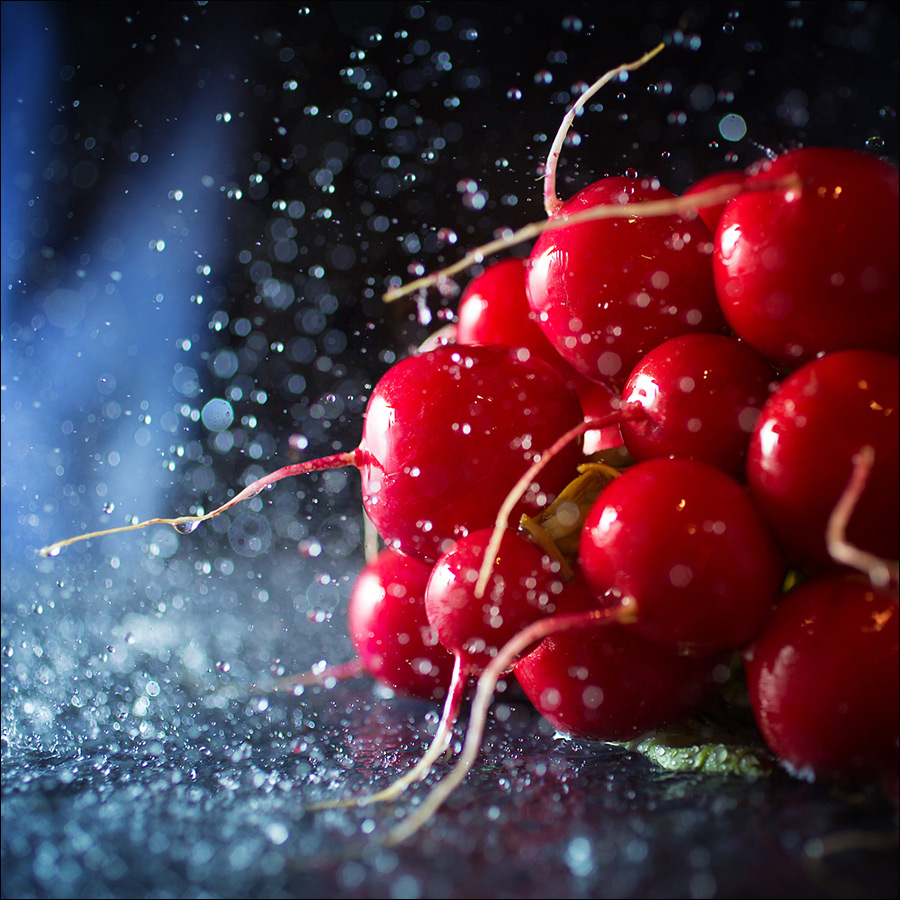 If you enjoyed this little workshop, you also might enjoy my blog. It’s still in German, but with Google Translator and with the lots of pullback shots and stuff there, I think, everyone gets the idea what’s going on there. :-)
kontakt@fotopraxis.net
https://fotopraxis.net