The kind people at Kodak sent me a Kodak SP360 action camera to try and see what I could create with it. Essentially this is a compact 1080p HD video camera which you can attach to things to take wide-angle action video clips. Perfect if you want to take breath-taking videos while scuba diving or free-falling from planes or being involved in all kinds of daring action. It would also be perfect as a dash-cam if you want to capture the next time a meteor comes soaring through Earth’s atmosphere.

I don’t scuba dive. (I live in New Jersey anyway.) I am really not up to sky-diving. And I can’t drive around New York and New Jersey for the rest of my life, on the off-chance I’ll be there when a meteor spectacularly comes down.

Instead, I thought it might be a fun thing to attach this video camera to a trombone slider while someone is playing … and get some funky footage as the video-cam slides closer and further away. You may remember Jonathan Arons from the NYC headshots photo session and the photos of him performing in a night-club. Well, that’s him in the video.

Jonathan very kindly indulged me in this and we shot several sequences of him playing his trombone out on the streets of New York, with the Kodak SP360 clamped to the trombone slider.

There was no other rationale behind this video clip than having some goofy, surreal fun. 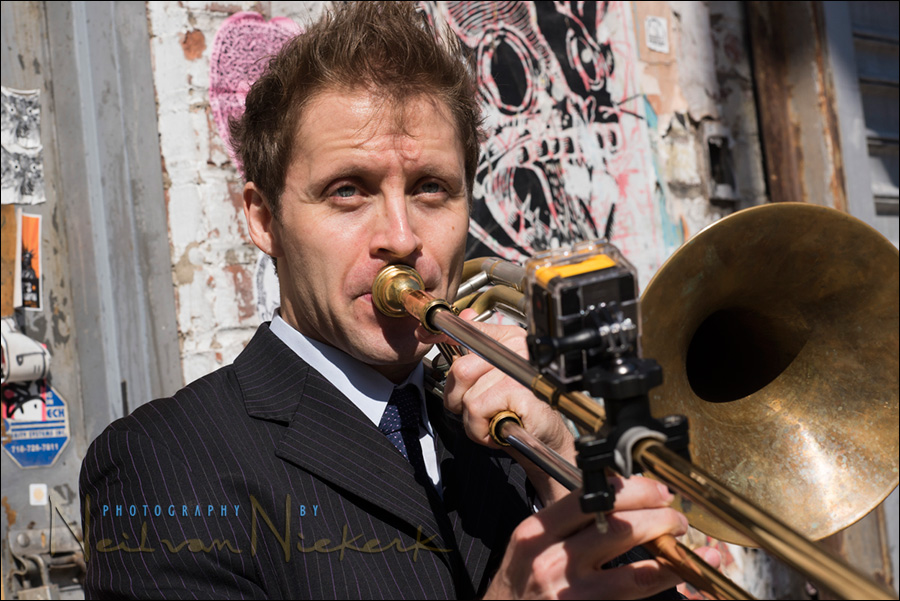 The video that you capture with the Kodak SP360, can be changed between several video modes, even after capture:

In the clip here, you can see me trying to duck out of sight on two occasions. Unsuccessfully. The 360 degree fish-eye view really is … very wide.

The SP360 can also be used to capture 10-megapixel stills at a frame-rate of 10 photos per second.

It also has a motion sensor built in, to stop & start as it is triggered by motion.

Ultimately, this little camera has applications as diverse as your imagination will allow.

More info about the Kodak SP360

Specifications of the Kodak SP360