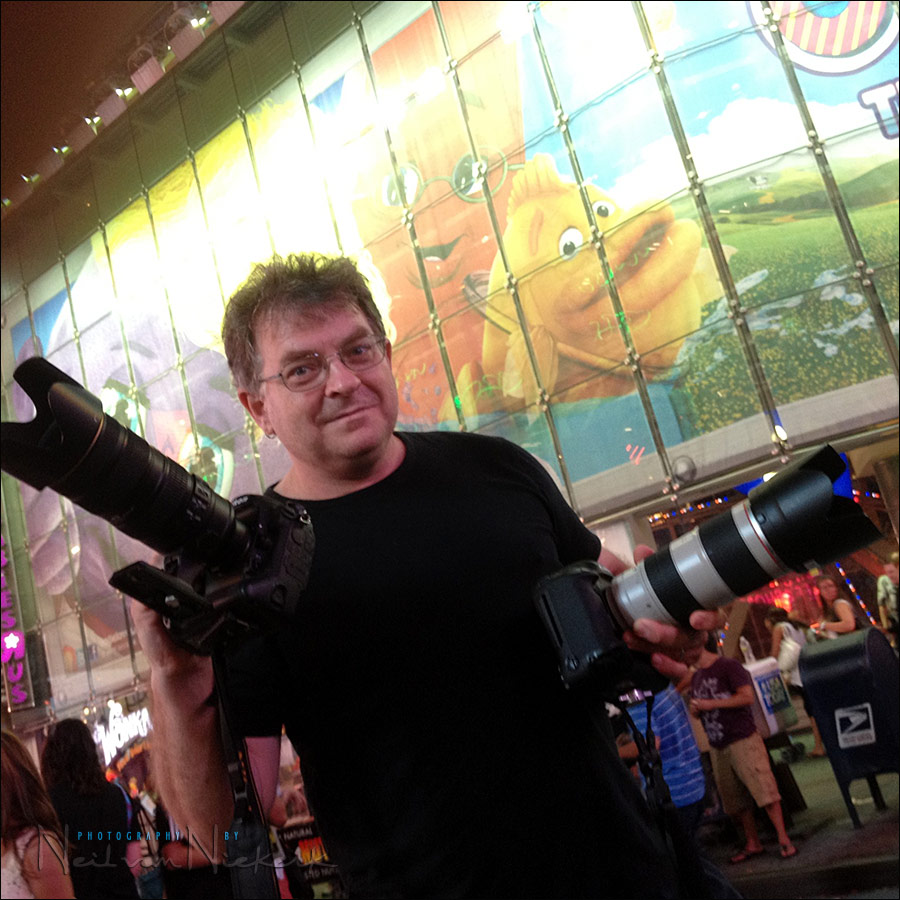 Canon vs Nikon: my experience using both the Canon and Nikon systems

It seems that whenever I post here about using either Canon or Nikon gear, or when I’m seen with either, that some people are surprised that I’m using the other brand.

Just to mess with everyone, here is a snap of me carrying a Nikon D4 and a Canon 1Dx, each with a 70-200mm f/2.8 lens. If I look a little gung-ho there, I most certainly do look happy with all those toys … appropriately enough, in front of Toys’R’Us in Times Square. The gleeful smile is mostly because I still have the same enthusiasm and love of the gear as when I first fell in love with a camera, way way back. I love the Art, but I also love the toys.

I know there’s a lot of curiosity about this topic – whether I shoot with Nikon or Canon. Or why I would have both systems. Most people who follow the Tangents blog, will know that I (predominantly) shoot with Nikon. There are specific reasons for that, and that’s the topic of this rambling blog post …

It’s a topic I have skirted around, and only answered in a few blog comments. I specifically tried to keep this topic a low-key one on this blog over the years:

Back to the Canon and Nikon thing – but first a bit of history:
My initial experience with photography as a young kid was with my dad’s PraktikaMat, and my first camera was a Pentax ME Super.  This was followed by a Pentax Super-A.  I bought my first Nikon in 1996 – a Nikon F90x – when the Pentax 70-200mm f/2.8 would’ve been more expensive than the Nikon lens and a used camera body combined.  In 2002 I embraced digital photography completely. I bought two Nikon D100 cameras, and sold my film bodies immediately. (I still have a Pentax Super-A as a memento.)

A few years later (around 2004), Nikon’s best camera was a (noisy) 4-megapixel D2H. In comparison, Canon had 8 megapixel cameras that had relatively little noise, and a full-frame 11-megapixel camera. Though I loved my D2H bodies, it had become time to move onto a system that didn’t limit me. I bought two Canon 1D mark II bodies and a slew of lenses.

Then towards the end of 2008, a year after the Nikon D3 was released, I sold all three my Canon 1D mark III bodies, and moved over to Nikon as my primary system.

The following is a reposting of a comment that I originally made in the article, the best camera in the world. This photo explains some of the reason why I felt I had to go back to using Nikon. The photo was taken towards the end of 2008, and shows my repair slips for the nearly 4 yrs that I had been using Canon.

– these do not include repairs to speedlights since I do hammer them hard, and it would be unfair to add them to the list. So that pile of papers isn’t padded by speedlight repairs.

– this pile of papers doesn’t include any duplicates.

– all of them were actual repairs, except one item I had sent in where the Canon Service Dept couldn’t replicate the problem I experienced. So these are genuine repairs, not just me sending stuff in randomly because I feel unhappy.

– this pile of papers doesn’t include my attempts to get a sharp 16-35mm (v2) lens. It took a 5th copy to get one that even started to match Canon’s hype about the new lens!  Honestly, the Nikon 14-24mm f2.8 absolutely wipes the floor with the Canon optic. The Nikon 14-24mm f2.8 is also a main reason I went back to Nikon. Canon simply has nothing that even matches this lens in optical quality.

– I also had to make two attempts at getting the 4th copy of the Canon 16-35mm f2.8 II calibrated to an acceptable level.

– This doesn’t include the initial Canon 24-105mm f/4 that was soft and I returned .. wait for it .. even before these lenses were recalled for the flare problem.

– What this list also doesn’t include are the two repairs slips for 2 of my 3 Canon 1Dmk3 camera bodies that had to have the submirror assembly fixed. (I bought the 3rd body after all the AF issues were apparently ironed out.)

– Neither do these repair lists include the one 1D mk3 that I sent in subsequently for poor AF and frequent error 99 lock-ups.

– And on top of it all, this list doesn’t even show the items I had sent in to Toshio for repair.

So there you have it .. a long list of problems with Canon gear over the period of 4 years. I had had enough after a while.

It cost me a truckload of money and a lot of time and effort to keep my Canon gear up to spec. It just got to the point where I couldn’t stand it any more. I had sunk a lot of money into Canon and maintaining a top-notch selection of equipment, but their erratic performance was disappointing.

To distill this … in my experience, Canon has poor reliability, which I believe is due to Canon’s poor quality control. Which in turn I truly believe is a corporate decision made by the accountants to not have more stringent quality control. This way fewer items are returned since many people won’t even realize their equipment is faulty. (There’s another bit of psychology at work there as well where I think it is difficult at times for photographers to accept that the equipment they sunk a lot of money into, isn’t working properly.)

As mentioned earlier, I still maintain a small Canon system, specifically for the photography workshops and tutoring sessions .. but for professional work, I know I can rely on Nikon.

Sure, the Nikon gear that I have, do act up on occasion. For example, I’ve sent in my one Nikon 70-200mm f/2.8 twice now for optical mis-alignment where the lens shows severe blur. Entropy will have its way. Also, there was the initial trouble with Nikon D4 bodies locking up intermittently, depending on certain custom settings. This problem was sorted out with a subsequent firm-ware update, but it must have been an embarrassing episode for Nikon to have their flagship camera show such a problem!

In my experience however, the Nikon system is one I don’t have to continually struggle with to get optimal performance and reliability. I’ve also never had a Nikon lens that needed calibration directly out of the box.

I’ve spoken to numerous photographers about this. Many have had similar experiences. Yet others have had exactly the opposite experience where they moved to Canon after their Nikon gear simply wouldn’t perform to spec. I have to repeat then that this is how I experienced it. Others have different experience of the specific systems. I just know that my decision didn’t come lightly, and that after several years now, I am more confident of my current system than I had been previously.

I decided to post this article because of the amount of emails I’ve received in the past few years on this topic. But there’s another reason … my review of the Canon 24-70mm f/2.8 II

Finally, I love comments and discussion on my website. This blog thrives on that. But this is one topic that I know has real risk of exploding very quickly. Though I rarely delete or edit comments, I will do so if I feel any comment is just to sneer or troll, or is out of line in any way.

Oh, the Canon 1Dx in that photo is a friend’s. We were out that evening playing with the cameras.

I was very impressed with it in the short while I got to play with it. Auto-focus is soooo smooth!

If I were still shooting Canon, I’d be all over this camera. It’s pretty phenomenal. Handling and controls are much better than that of the 1D mark3 (the last pro Canon I used).

But there’s nothing there that would make me be less in love with the D4, and I’d still have to struggle with certain zoom lenses like the Canon 16-35mm f/2.8 … and I don’t ever want to go there again.

Ultimately though, I don’t think there’s all that much to choose between the D4 or D1x. I think any photographer would get along with either of those cameras. Both are amazing cameras, and jaw-dropping examples of just how incredible technology in general is right now.