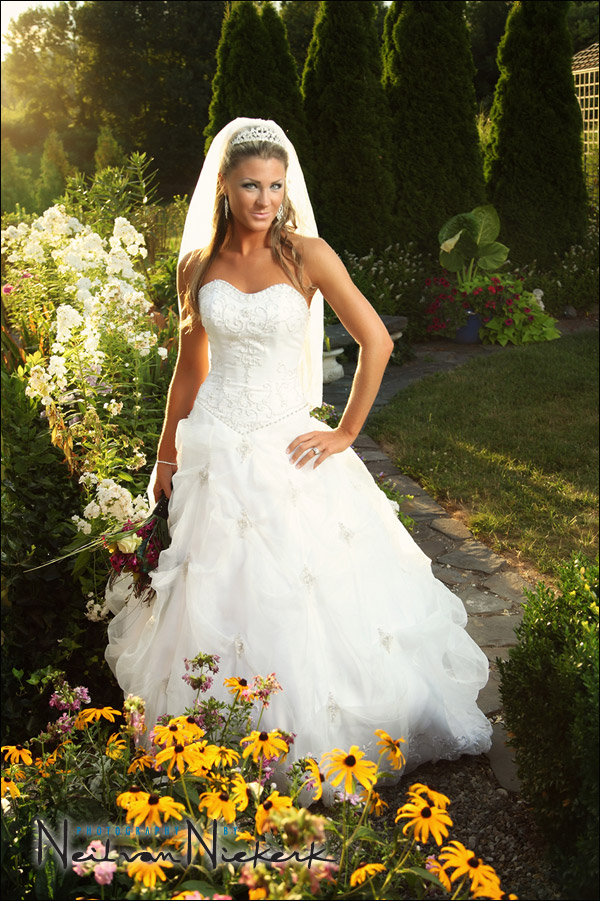 A bridal portrait (taken during one of the photo sessions arranged by the Hudson Valley Click), where it is easy to see the advantage of using off-camera lighting.

The strong back-lighting is used as a way to highlight the background and have the rim-lighting etch our model against the background. Of course, having her turn her back to the sun also helps with not having our model squinting in the bright light. We immediately avoid unflattering hard light on her face. But we then do need to add off-camera lighting of some kind to cross-light her.

I used TTL flash here, since I often find this is the fastest and easiest way to get good flash exposure. The flash was diffused with a white shoot-through umbrella, and I used wireless TTL triggers to control my flash.

To get to an off-camera flash setup, we need not immediately buy wireless triggers. As a basic entry to the world of off-camera TTL flash, we can use just our Canon gear – another Canon speedlight as master flash to control our slave. Most of the images in my book on off-camera flash, was taken with a setup as simple as that: a master speedlight on my camera (with its own output disabled), controlling the slave speedlight. I’d say this is the most simple way to dip your toes into the water if you’re new to off-camera flash.

There are further options here, such in the case of the Canon 7D, where we can use built-in flash as the master controller. This will surely be included in future Canon DSLRs. We can also use the Canon ST-E2 as the wireless controller.

The main restriction with these simple setups, is that we need line-of-sight between the master and the slave. We have a distance limitation as well. For most photo sessions though, the distance isn’t usually a concern. It’s the line-of-sight thing which can often be a problem. The moment you move ‘forward’ of your flash setup, you risk the master and slave not seeing each other and your flash not triggering.

To overcome this, we need to look at the Wireless TTL triggers. There are a number of options. There are two main choices – PocketWizard and RadioPopper. There are also other triggers such as the Pixel triggers. And I’m sure there will be other players on the market in the future. There might even be some available now that I’m not aware of.  But right now, the two main choices are  PocketWizard and RadioPopper … and they happen to be the two TTL-capable radio triggers that I am knowledgeable with.

The RadioPopper PX transmitter unit attaches with velcro strips (or gaffer tape or rubber bands) onto the Master speedlite or Canon ST-E2 wireless transmitter. Via the menu setting, you set up the controls for it. The default is for Canon. Setting up is really simple. Actually, simpler than the RadioPopper instructions would make it appear.

The RadioPopper PX transmitter reads the control signals as emitted by the Master flash, and converts them into radio-frequency signals. The slave radiopopper then receives and converts the radio-freequency signals back into light pulses for the Slave speedlite … which works just as if it had directly received the light pulses from the Master speedlite. 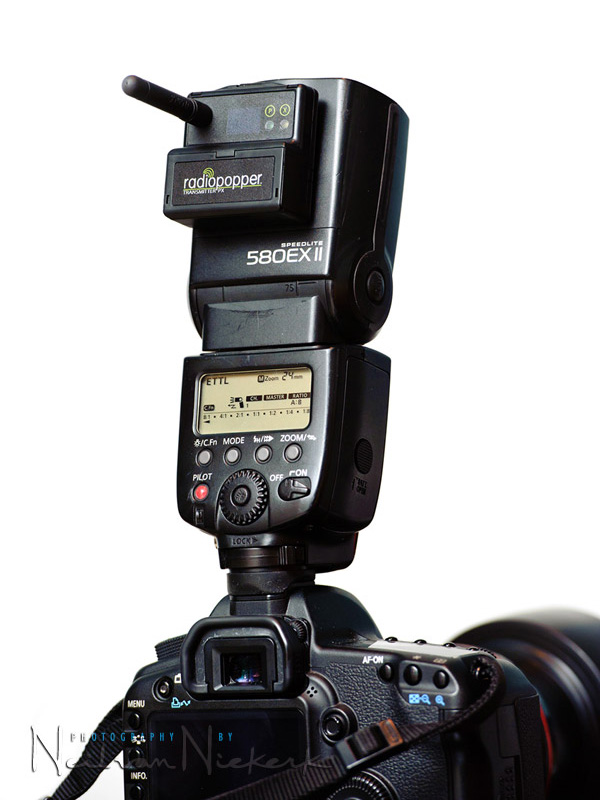 The RadioPopper receiver unit is mounted via this bracket to the Slave speedlite. You can velcro it down if you want, but the bracket helps for the sensors to align properly. There are notches in the bracket to allow for other units than the Canon 580EX II flash. 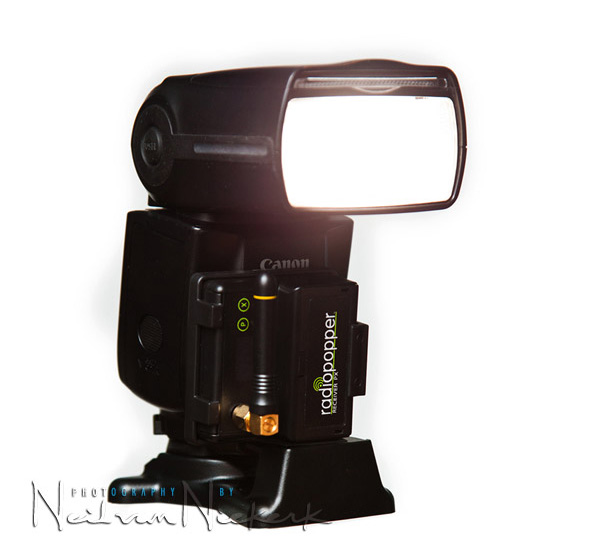 Again, setting up is really simple.

The beauty of the RadioPopper units is that they only transmit the signal. They don’t interject themselves into the system. They just carry the signal between the Master and Slave speedlites.

This means that if you have a problem with the Slave not firing, your first recourse would be to make sure that the Canon wireless system itself is firing properly. Then you re-attach the RadioPoppers again.

In my experience so far, this second generation of the RadioPoppers is a robust technology. Meaning, they just work.

While the beauty of the RadioPopper PX units are that they only transmit the signal, their limitation is that of the Canon wireless system. It just isn’t as flexible as the Nikon CLS system. This is where the PocketWizards step up. 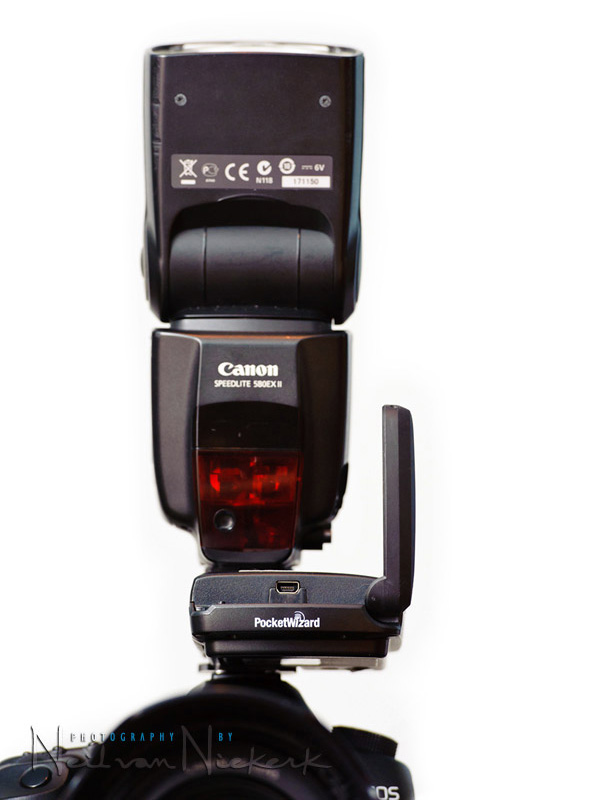 The PocketWizard MiniTT1 and FlexTT5 (which I’ve featured regularly on this site), is based on a different design philosophy than the RadioPoppers. The PocketWizards are inserted into the system, and they take control of the electronic signals. It’s quite a brave move, and through the various iterations of software updates, have come to work very well, with two strong caveats:

1. I’ve had so many hiccups in using the PocketWizard TT5 units in workshop format with multiple shooters, that I have now moved to the RadioPoppers for my flash photography workshops. More about this later on in this article.

2. The other main problem in using the PocketWizard TT1 and TT5 units, relate to the Canon speedlites themselves. The Canon 580EX and 580EX II and the Canon 430EX (1st version) all generate so much radio-frequency noise, that they interfere with the reception of the signal from the Master FlexTT5 / MiniTT1.

PocketWizard and LPA design have gone out of their way to try and overcome this, and offer a number of solutions to reduce the RF interference generated by these Canon speedlites.
– range-extending solutions, by PocketWizard
– extending the range of the PocketWizard FlexTT5 and Canon 580EX II, by Rob Galbraith

related article:
– Flickr discussion on Canon 580EX II failures due to misalignment of the flashtube.

Okay, so there are various solutions to this problem. (Check the linked articles by PocketWizard and Rob Galbraith for thorough explanations.)

I settled on another option which allows me to use a softbox more easily if I wanted to. This option apparently isn’t quite the 100% effective solution compared to what is offered, but does seem to substantially reduce the RF interference problem.

1. The Flex TT5 and Canon 580EX II need to be separated by a large enough distance. PocketWizard recommends 18″ at least. For this, I use the Canon OC-E3 off-camera TTL flash cord (B&H).

Here is how my off-camera flash setup looked for the image at the top. (As an aside, I used the Canon 5D mark II, and the Canon 24-105mm f/4 L lens for this photo session.) 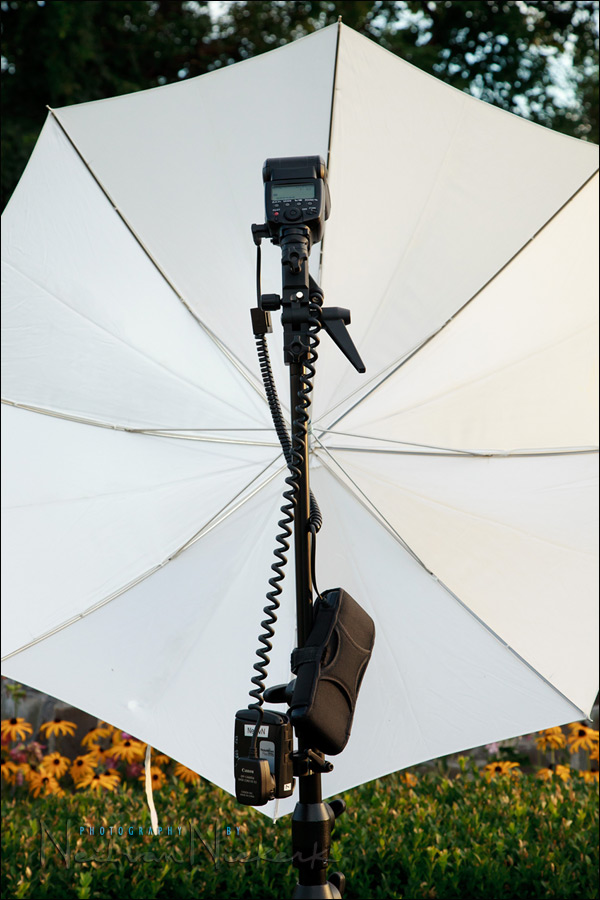 To stop the radio-frequency noise being propagated via the OC-E3 cable, and the battery pack cable, an RF choke is attached around the cables near the 580EX II. (Details about where the RF choke can be ordered, is mentioned in the linked article by PocketWizard.)

Here is the detail shot showing the RF chokes and how the flashgun is attached to the umbrella bracket. 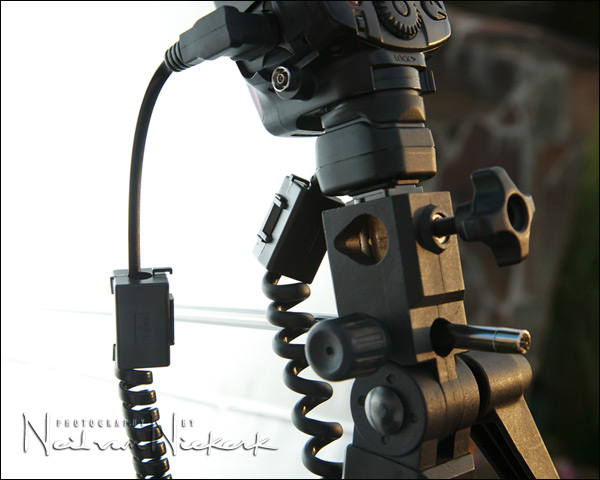 Here is how I mounted the FlexTT5 to the light-stand with a clamp. 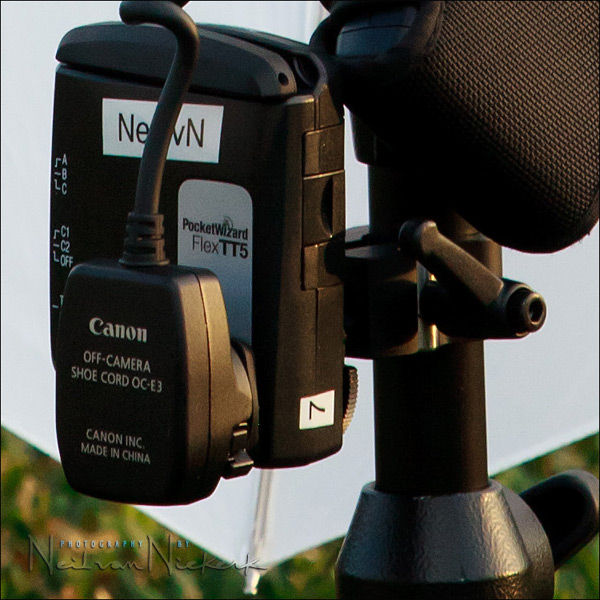 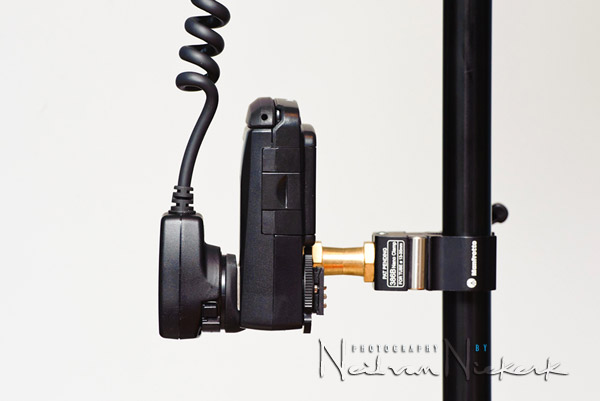 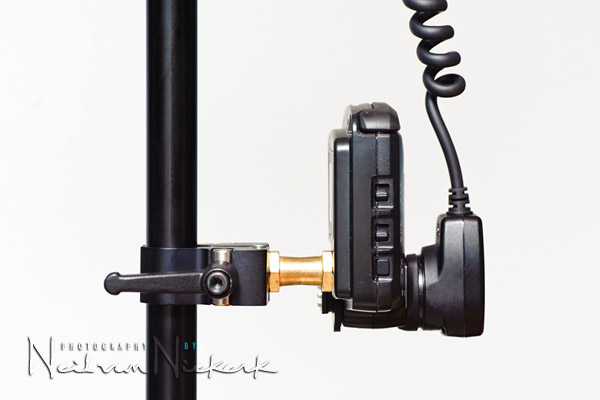 With this setup, I have been able to effortlessly get images like the one at the top of the bridal portrait. With the OC-E3 cord and other attachments, it does take more effort to set up though than using the RadioPoppers.

So why would one choose the PocketWizards over the RadioPoppers then? For me, the main reason would be that with the PocketWizard AC3 Zone Controller (B&H), the Canon speedlites can be made to behave like the Nikon flash system.

With the PocketWizard AC3 Zone Controller (B&H), you can set the three groups of flashes, and from the camera, turn any of them to TTL mode, or manual mode, or turn them off. You can also set specific levels for the TTL output and manual output. The Canon wireless flash system works with A:B ratios. It does work, but for me it is easier to work with specific levels. With the AC3 unit, I can now change the B group to, (for example), 1 stop less than the A group. I can change one group to TTL, and another group to manual.

This review of the PocketWizard AC3 Zone Controller for Nikon, will explain in more detail exactly how this works. Anyone familiar with how the wireless flash system usually works for Canon, will easily see the differences. For multiple flash setups, this has a clear advantage over the simpler Canon wireless flash setup.

The downside in setting all this up for Canon speedlite to work properly, there is additional equipment expense – the Canon OC-E3 cord; the clamps and so on. Also, it takes a few minutes longer to set up. But it does work very well … for the individual shooter.

For my photography work, I rely on Nikon, and I’m quite happy with the PocketWizard FlexTT5 units for Nikon. For the multiple photographer environment of a workshop, the PocketWizard units (whether for Nikon or Canon) haven’t performed as expected. Apparently with the way that the PW units work, interjecting themselves within the communication train, means that the Slaved unit becomes confused with multiple Master units trying to access it.

For the workshops, I have now migrated to the RadioPoppers with great success. Since the Slaved speedlite just “listens”, waiting for the light pulses, it reacts immediately to any Master flash. The Slaved flash then reacts as well as if the Master flash had direct line-of-sight communication with the Slave flash … regardless of there being multiple photographers.

Final summary:
Both systems work really well, although for the PocketWizard units there is the caveat with the Canon speedlights and RF interference. As mentioned before, the PocketWizard team (and LPA Design) have gone out of their way to surmount this problem. With great success.

The RadioPoppers is the simpler system, and is easy to set up. I have to express admiration for Kevin King’s genius in figuring out how to intercept the pulses from the Master flash, and convert that into radio-frequency signals.

And finally, having spoken to the teams at RadioPoppers and PocketWizards, I have to say I am impressed with their dedication to their work and products.

RadioPoppers can be ordered directly from their site.

The PocketWizard FlexTT5 and AC3 for Canon can be ordered from these affiliate links: