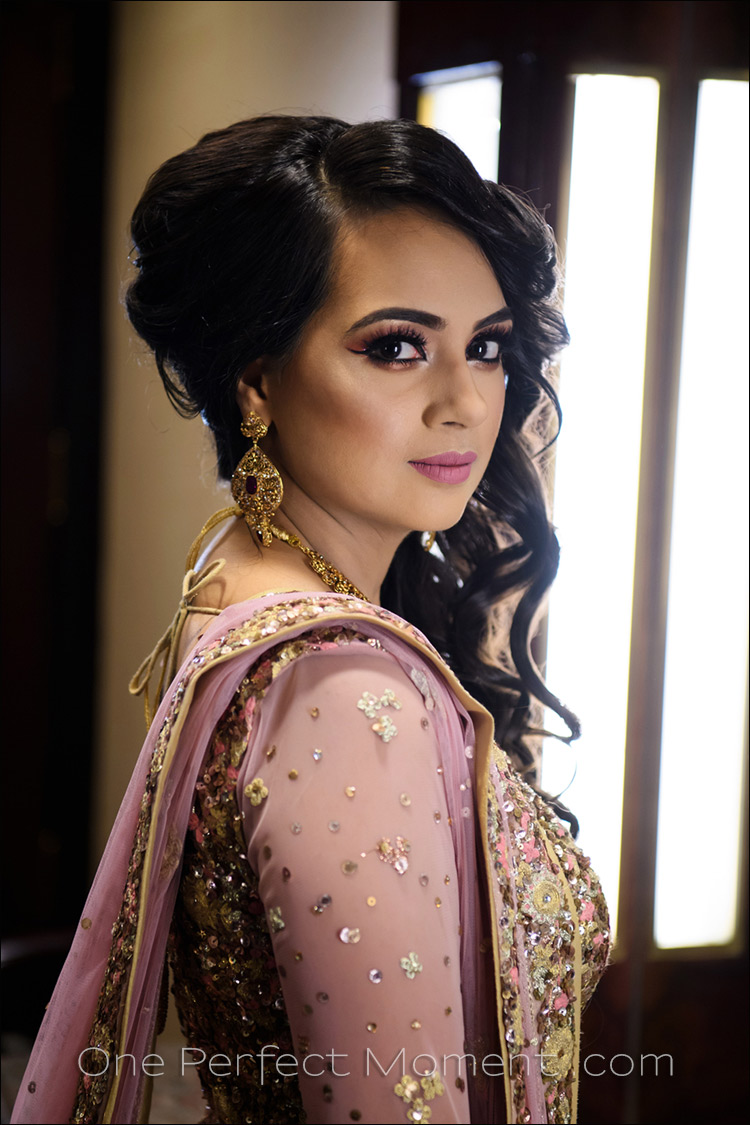 Two interesting questions came up in the Tangents FB group – both posted by Matthew Ciscart, one of the regulars: The first question was whether a client had ever asked for a specific lighting? Such, hard light, soft light, natural, or ocf?  The other question was whether any of the photographers had a specific go-to style of using lighting. That one thing they do. My reply to this, relating it to lighting styles in wedding photography, was I haven’t had a client ask for any specific lighting.

However, I do believe my website shows a consistent style. Therefore, when they book me, they do indirectly ask for that. So I need to be consistent in the look I give them, even if I use a variety of lighting sources and types. Similarly, I don’t think I have one specific way of using lighting. But for all the variety, the images need to mesh as a combination, without anything jarring about the specific lighting or look.

With that in mind, I would like to show these 6 images from the portrait session of a wedding – time that I had with the bride and groom – and show that even with a diversity in lighting that was used, these and all the other images, are still part of a coherent style. Of course, it has more to do than just the lighting – other things come into play as well – framing, composition and posing, as well as the post-processing. Still, just looking at the lighting and the color and skin tones – there is a consistency in the style. 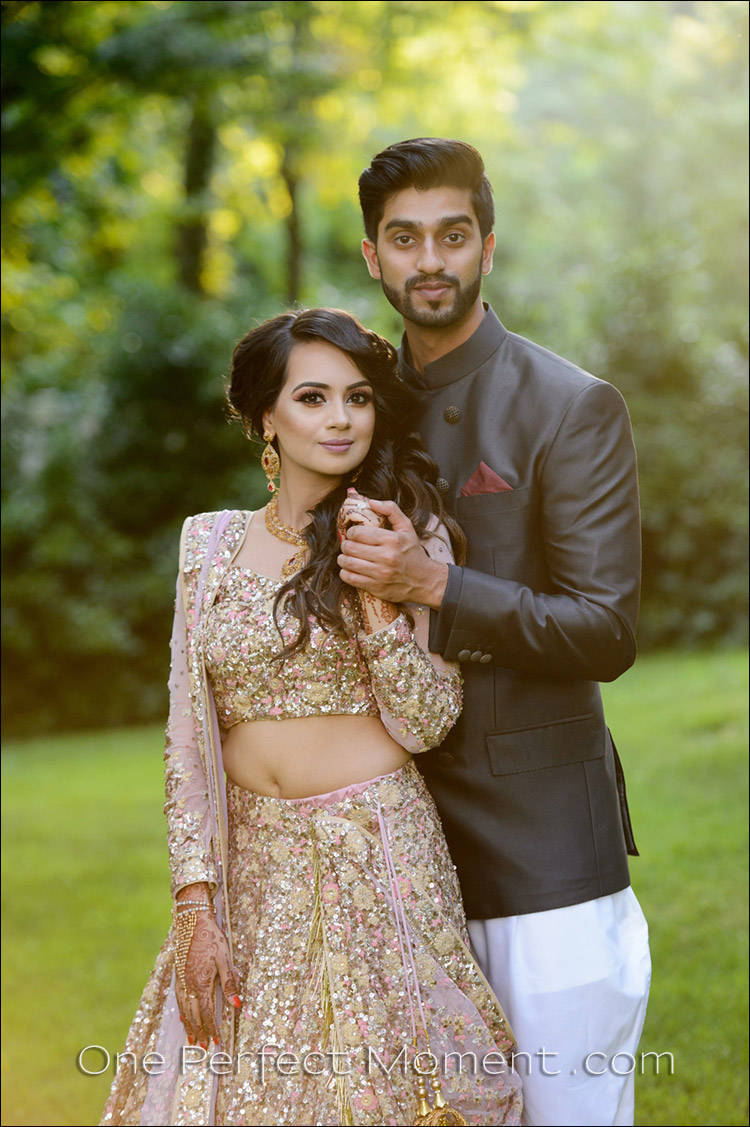 This image and the one below are connected in that they both have the same camera settings, and were taken in more or less the same spot. In the image below, I let the sun flare out and this created a more ethereal look with muted contrast. It was just a small shift in position, I switched the flash off, and the resulting image looks congruent with the previous sequence (of which the photo above is one.)

In the image above, taken before the flared image, I took care to not have any flare from the late afternoon sun. But since this photo is more a portrait than the flared photo (which is all about the mood), I used off-camera lighting to show detail. I used the Profoto B1 flash (affiliate), with a white shoot-through umbrella, but at these camera settings, any speedlight with an umbrella would’ve given similar results.

Note the high ISO and wide aperture – this is so that the background exposure looks natural. Of course, the shallow depth-of-field helps defocus the background.

How much was added flash? I don’t quite know – it’s just enough. I let the Profoto give me an initial TTL exposure, and then locked it as a manual flash exposure for consistency. The pressure is on, there is no time to walk through the flash-to-ambient ratios in a technical way, so I will happily rely on the technology.

So there it is then – two photos, taken in the same scenario, but with a different approach to either, to give me variety in the final selection. 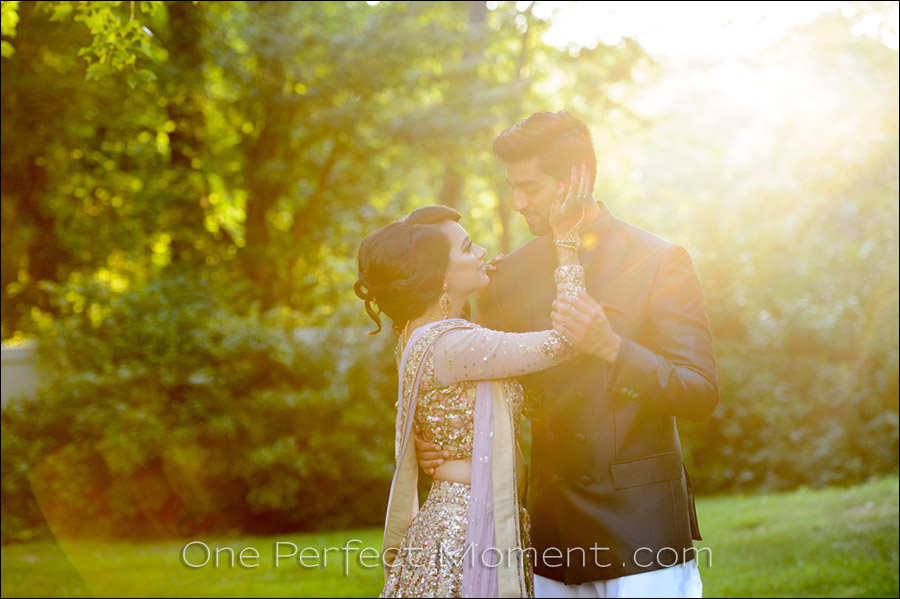 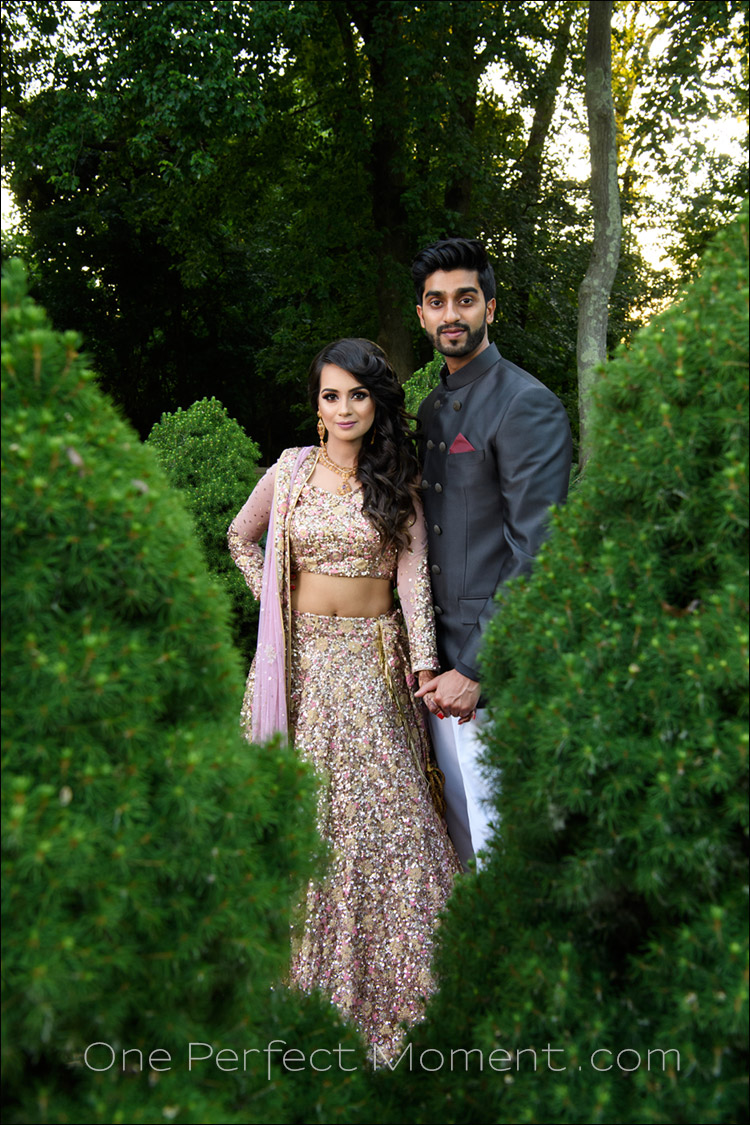 These two photos share the similarity of both having off-camera flash to make the colors and skin tones pop. In the photo above, the off-camera flash setup was behind the bushes, to camera left. This way I could light the couple, without lighting the foliage nearly as much. (In other words, the lighting is on the other side of the shrubbery.)

With the photo below, it was a similar line of thought – I didn’t want to over-light the flowers which were closer to me. My position was lower down on the grass bank so that I could make the flowers part of the composition. This was also so that I could lose much of the brick paving, which would have been a boring element in the photograph’s composition.

With the photo below, some back-lighting would have been ideal, but the families were already gathering for the family photos, so I had to move quickly – no time to set up a 2nd light behind her. 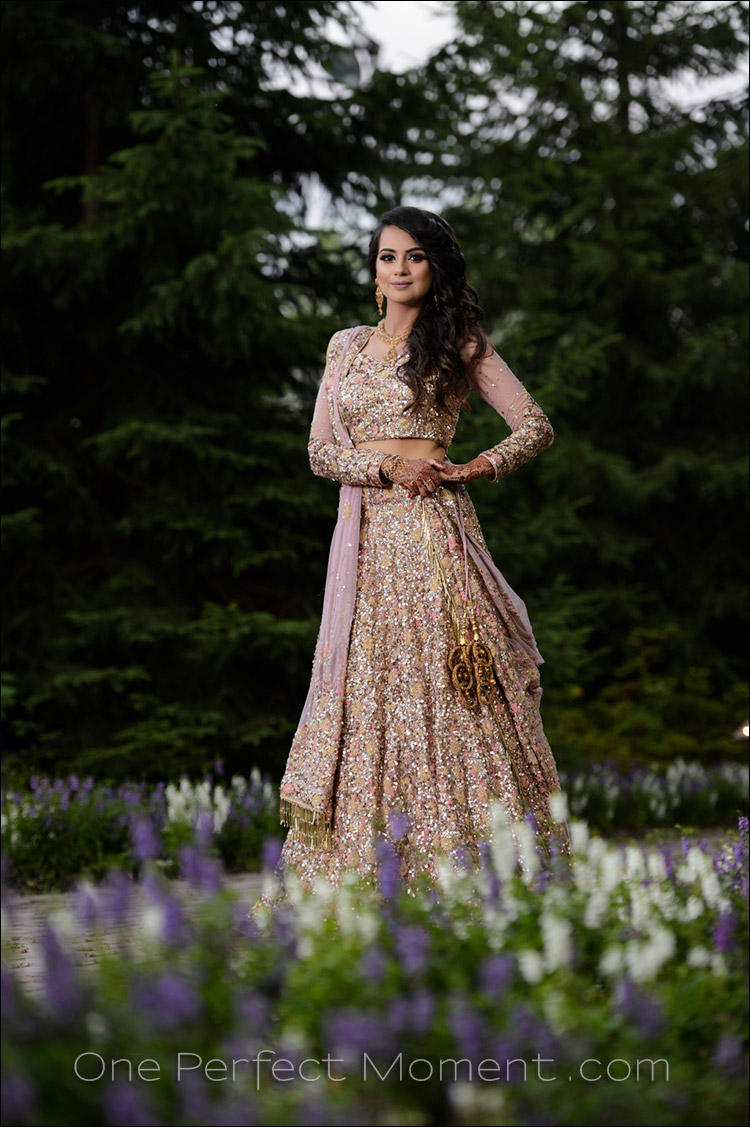 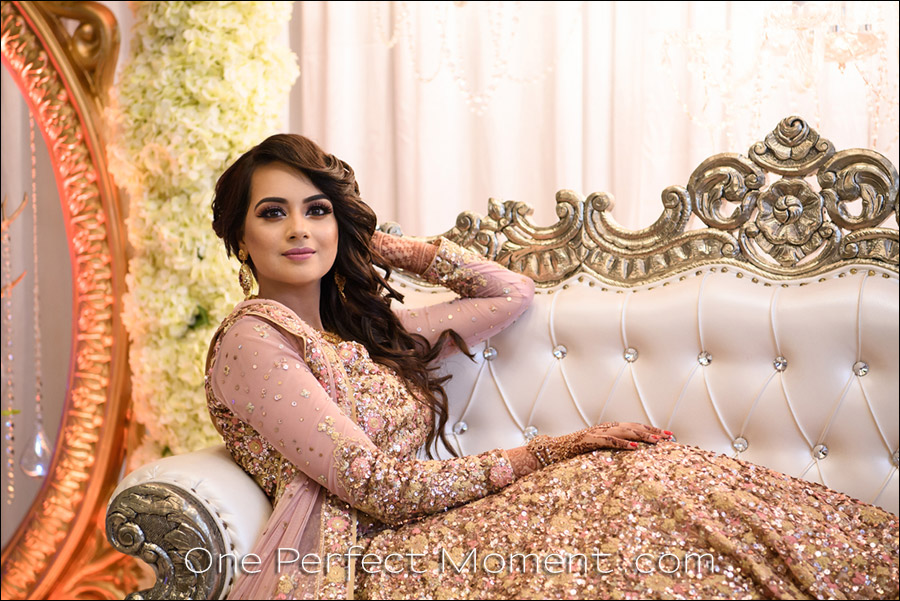 I was asked to take photos of the bride where they would be seated on the chair on the raised platform in the reception room. Since there was already somewhat enough light from the house lights, I wanted to just clean it all up with some bounce flash. The ceiling was high and uneven, and not white. Even then, I had enough light from the bounce flash to provide flattering light on her face. I bounced the flash up and behind me. No need for my usual BFT since there was no need to flag my flash. Also, note that I had no diffuser or white cup or some kind of plastic on my flash. Just the bare flash bounced up, and behind me. Simple. It works.

Finally, the photograph shown at the start of the article. In the room where the bride was getting ready, the huge mirror at the dresser had these light panels on every side. Beautiful soft light if you pose your subject into the light. It took careful note of how the light fell on her, to make sure the light was flattering. Using available light, or any other light source, for that matter, isn’t just an arbitrary decision. It is always best done with specific intent.