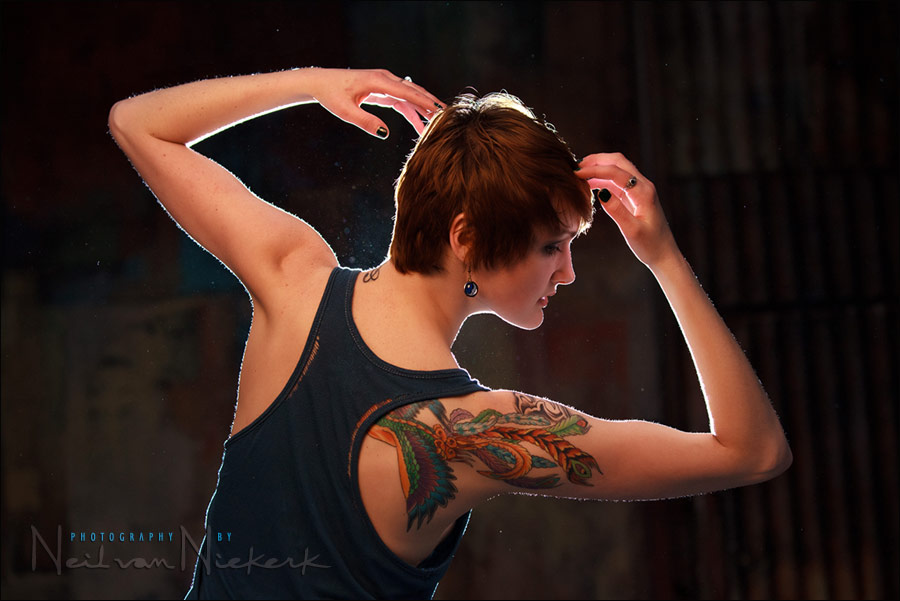 While playing around in the studio late this evening with a group of attendees at the Treehaven workshop, someone challenged us each to come up with an idea, using any of the lighting equipment there …

The modeling light, which is a continuous light source, and is quite warm. I expected it to be close to Tungsten / Incandescent, but it wasn’t quite as warm. Still much warmer than the ‘cold’ light from the studio flashes … or the speedlight I eventually used as a rim lighting.

I intentionally under-exposed her, wanting the rim-light to etch her against the out-of-focus (and darker) backdrops. In the first shot I took of her in this pose, I liked the light, but the gridded light on the floor behind her, cast too much light on her chin from beneath, causing too large an area to blow out. Overall, the image looked good, but it needed to be fine-tuned.

The fine-tuning took place as I replaced the gridded light on the floor with a speedlight on a light-stand directly behind her. In carefully positing myself and Amy and the light-stand with the speedlight, I was able to completely hide it behind her. No editing in Photoshop needed to remove any part of the back-light. I didn’t gel the speedlight behind her, since I wanted the rim-light to be more blue than the light from the front. 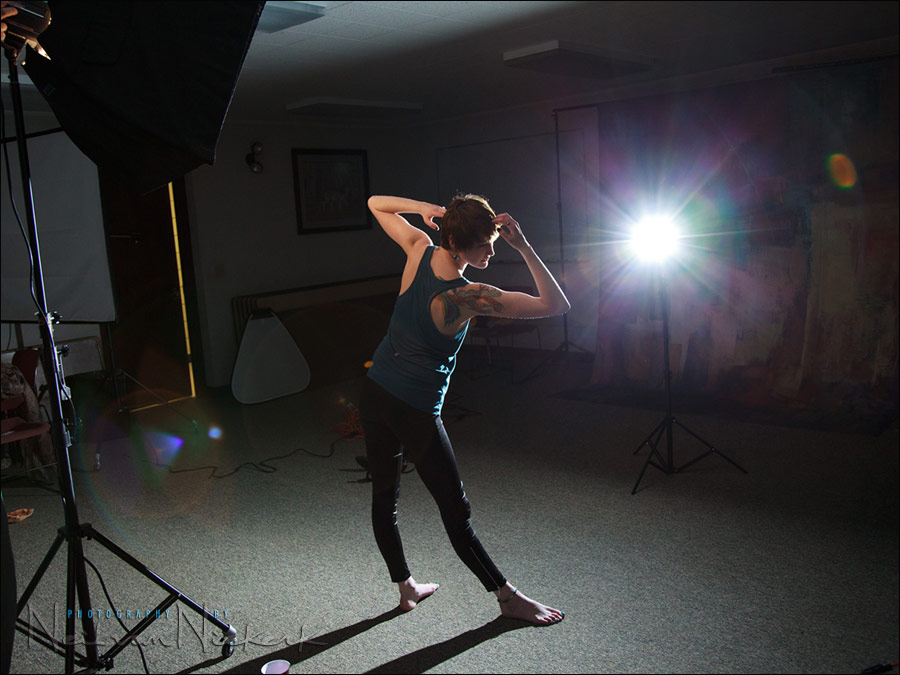 There is no one specific “correct exposure” here. It is just whatever looks good … or is preferred. And I liked it like this. So even though it is technically “under-exposed”, the rim-light is what defines her. The light on her from the modeling light inside the large softbox is just there for a touch of detail. It could’ve been brighter or less bright. It’s a matter of taste then. It is the rim-light that does all the work here.

The speedlight was set to 1/16th power. It doesn’t quite matter though. Since the rim light is there to blow out the very edges of her form in this photograph, the flash’s brightness can vary, and it would still look great. As such, it need not be correctly metered.

More about the choice of white balance:
This image is very warm. Again, intentionally so. I used Daylight WB, knowing that the light on her would go quite warm as a result. I liked that bit of a red glow the light at this exposure and chosen White Balance.

This brings us back to the idea about things needing to be “correct”. Just as the exposure here is a matter of choice, the White Balance too, is a matter of preference. What supersedes the idea of “correct”, is the need that the image looks good. I’d rather have pleasant WB than correct WB. (Although it is easier to get to a pleasant WB if you have correct or near-correct WB.) Someone else might have chosen a much cooler WB, but I have a preference for warmth.

In that sense, this article ties in with the current series on different situations where the difference in White Balance in the image was used for effect.