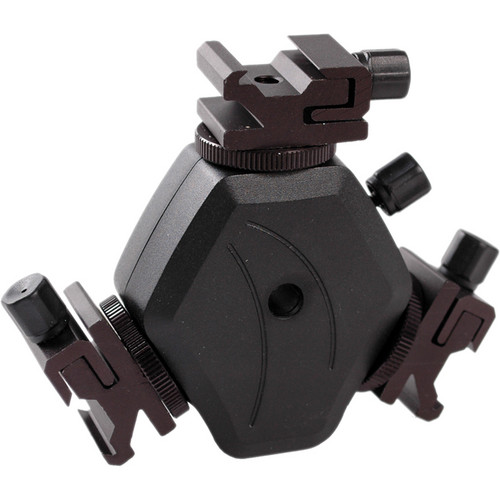 I use a multiple flash mounting bar during workshops where I need to have a diverse number of setups running simultaneously, but something more compact is also useful. In that article, I listed other flash mounting devices that allow multiple speedlights to be hooked up on one light-stand. Since then, I’ve discovered this triple flash mounting connector – Triple Flash/Umbrella Mount (affiliate) –  and it is superior to  others that I’ve tried.

What sets the Triple Flash/Umbrella Mount (affiliate) from other similar devices, is that the flash cold shoe can be rotated. This doesn’t seem like much, but when you try and add wireless flash transmitters like the PocketWizard TT5, then the bulk of those wireless transmitters get in the way. By rotating the flash trigger by 90 degrees, you can more easily accommodate two or three wireless triggers and the speedlights. You then simply rotate the flash heads to have the flashes point in the correct direction – into your umbrella.

It’s a simple tweak to this kind of device, but it makes all the difference when using multiple speedlights with wireless triggers, on a single umbrella.