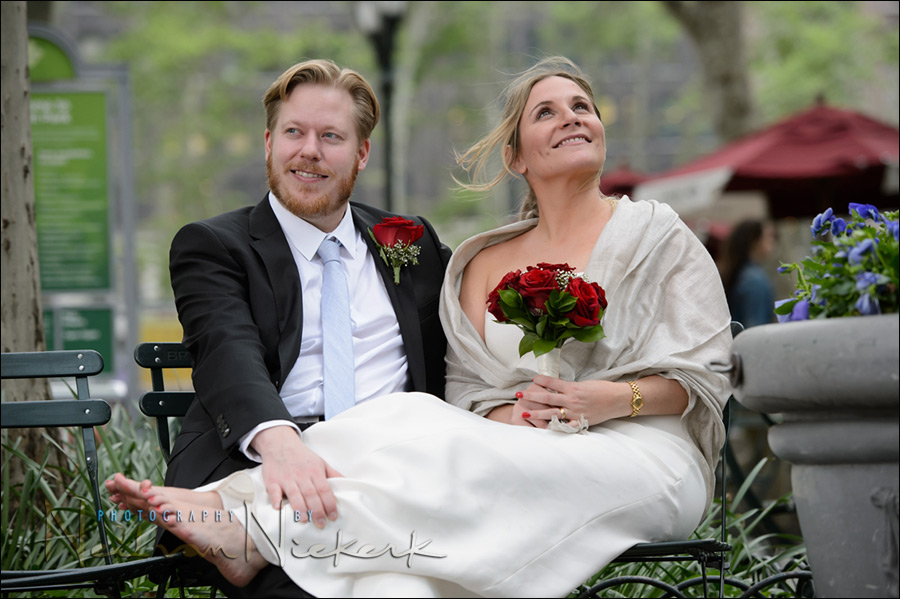 The articles on the Tangents blog have focused heavily on the technical aspects of photography – lighting, posing, camera settings and such. But there is another essential ingredient for you as a photographer when you work with people – good social skills. This is invaluable – you can be a phenomenal photographer, but if you don’t quite know how to make people immediately comfortable and trust you, then the photo shoot will not be as successful.

With New York’s vibrant culture and the imposing architecture, it’s often a destination for an elopement wedding. Connie is from Sweden. Ianina is from Argentina. They met (and live) in The Netherlands. And decided to get married in New York with an elopement wedding at New York City Hall. Truly international. Also, I’ve never met them before. Aside from a few emails to arrange everything, there had been no other contact.

Whether you photograph headshots, or portraits or any similar type of people-related photography, this skill of making feel people relaxed around you and trust your skill as a photographer, is invaluable. How to get there?  I don’t really know – it is something I had to develop over the years. Believe it or not, I’m not naturally extrovert. However, as a photographer it became a necessary business survival skill – working with people in a nice, relaxed way.

The photograph at the top is for me a great example of where I try to head towards in a photo session (or as in this case, a New York elopement wedding) – their expressions are genuine. They are really delighted to be here in New York … and they appear to be camera un-aware.

Using this elopement wedding as an example, I’d like to step through some of the images – discussing the techie stuff like camera settings and lighting, as well as posing – but also discuss how I worked with them and went about building up a rapport with the couple, right from the start. 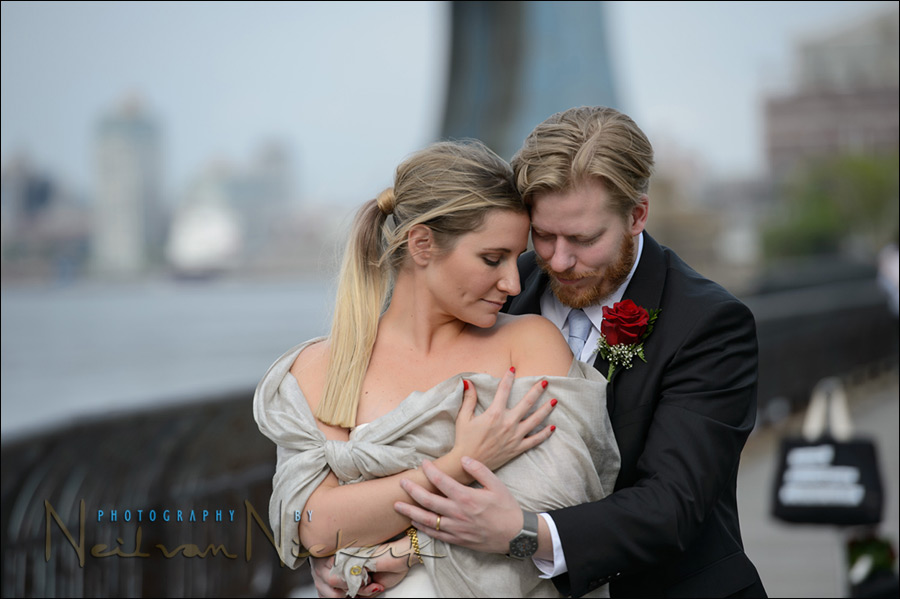 In as much as you are unequivocally there as a photographer – after all, you are there with at least one camera – I feel it is best not to interject yourself in the portraits. Guide the photo session along, help people feel relaxed, but at some level, you have to be able to pull back and allow your subjects to respond to one another or their environment, in a natural at-ease way. Even if they are camera aware.

I had a recent conversation with a headshots client in my studio. I started at a disadvantage because he told me right from the start how much he hated working with the previous photographer who did his headshots. The photographer was too energetic, waving his hands around, and demanding, “smile!” … all of which unsettled the person being photographed. That’s key – not to be too much, but to scale your behavior to that of your client. Unnecessary exuberance will create an  imbalance.

Again, I have no idea how one would teach that to another photographer – this rests mostly on being self-aware of how you come across. Be engaging and warm, with a touch of gentle humor.

Gentle humor works well. But please stay away from the cliché photographer jokes. “Act like you like one another”, has never been funny. Never will be. In the same way, don’t rely on regular stand-by jokes. Instead, gauge your client, and work with that. The best photographers have a natural feel for this. Find it.

An obvious starting point in engaging your client during and before the photo shoot, is conversation about them. Or things relating to them or the day or event. Pull it away from being about you, the photographer. It’s not a competition to one-up the conversation with details of your life. And if it is relevant, keep it short. It’s not about you the photographer. It’s about building up that rapport, and for that, you have to weight the conversation in favor of your clients.

Obvious connection points for a conversation – where did they come from, their careers, children. Anything really which would make a sustained conversation … which can be paused (or dropped) as the photo session continues.

Confidence inspires. Cockiness doesn’t. It’s often a fine line. Same with being gentle, vs being self-effacing. Your tone of voice and posture makes a difference. The way you dress. Even your handshake. Not limp. Not too hard. Just right, just like Goldilocks would’ve liked it.

Be self-aware so you can modulate the way you come across. But don’t be self-conscious. Be engaging and warm, with a touch of gentle humor. Always that.

Oh, and inevitably these days, your client will most likely have an interest in photography. If they ask you about your camera gear, don’t be defensive about the equipment you have. They are just curious and want to start a conversation. It’s not a contest. Here’s a hint, whatever camera your client has, it is always, “That’s a sweet camera! How do you like it?”

I would like to hear from you, what are your observations, and what work for you?  Post your comments below. I’m sure everyone would love to know how other photographers work.

The two photos above, for me, are good examples of where the couple didn’t appear self-aware, or aware of the camera.

With all that said, I am quite proud of this set of photographs taken during Connie and Ianina’s New York elopement wedding. Let’s step through some of the photos and look at the more technical stuff:

The portraits out on location in New York, was mostly lit with the Profoto B1 flash  (B&H / Amazon), and the Profoto OCF Beauty Dish (24″)  (B&H / Amazon). (This softbox also needs the OCF speedring to mount to the Profoto B1 or B2 flash.) Even though the Profoto B1 is top-heavy, I like the power. Instead of the larger 3′ Octabox I’ve used previously, I wanted something even smaller and lighter to help us wend our way around on the streets. The flash was held up with a monopod. My favorite assistant helped me out this time – my daughter, J9. 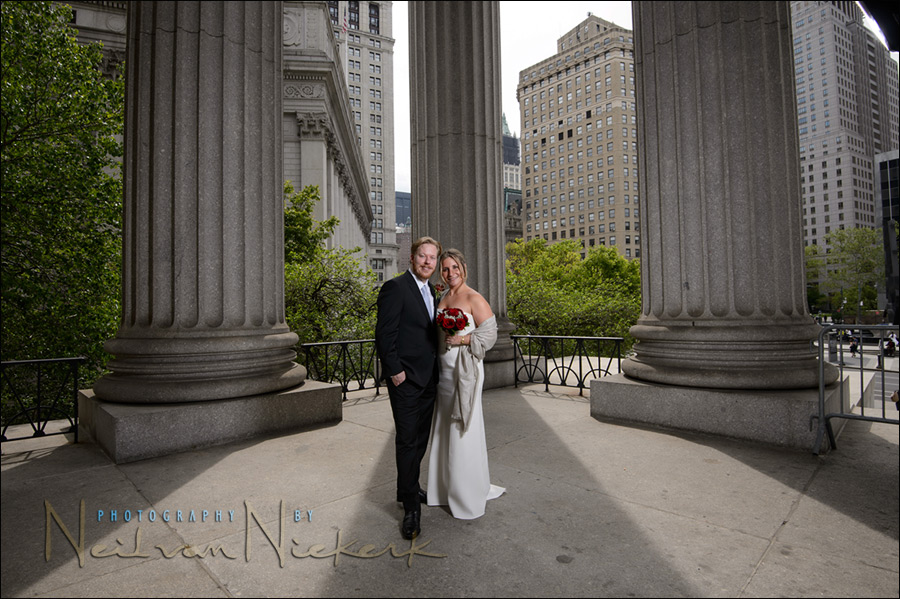 With this kind of photo session around New York, it is important to have a telephoto zoom for tighter portraits, but also an ultra-wide zoom to incorporate the epic architecture of New York. That definitely helps to give a sense of place.

In the photo above, you can see where the flash was positioned – I didn’t crop out the top right-hand corner. This will give you an idea of the distance, even with this ultra-wideangle shot. 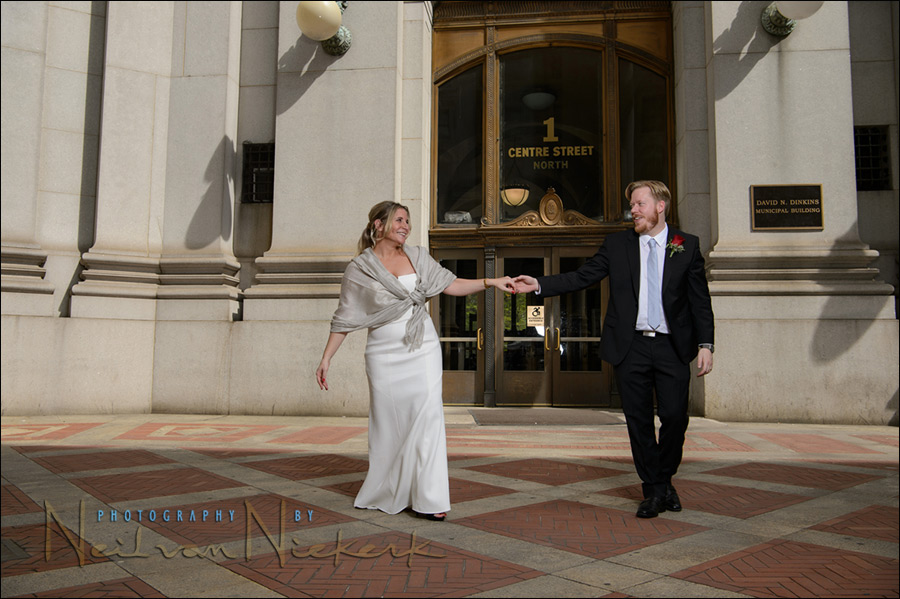 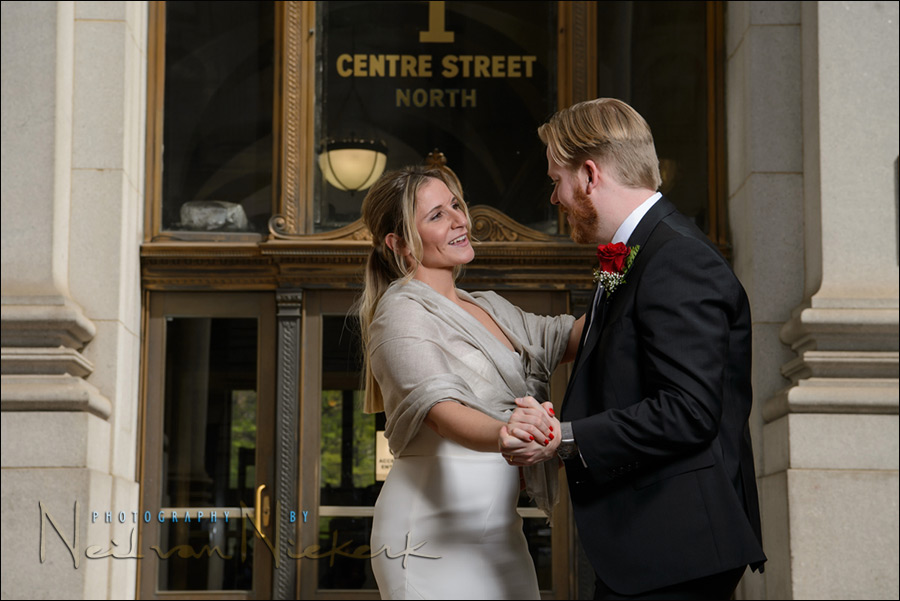 An easy way to prevent stiff posing, is to have the couple dance with one another. Big movements. Big gestures. Even if they think it feels and looks silly, there are always keeper photos because of the movement, and because of their expressions. I found this is an easy ice-breaker at the start of such a photo session. The concentrate on one another, and there are genuine smiles.

Techie details:  Exposure was based on the sunlit area, and then I added flash to lift their exposure up to that of the background. It is easier working this way to balance shaded and sunlit areas, than if I were to have them partially in the sun. 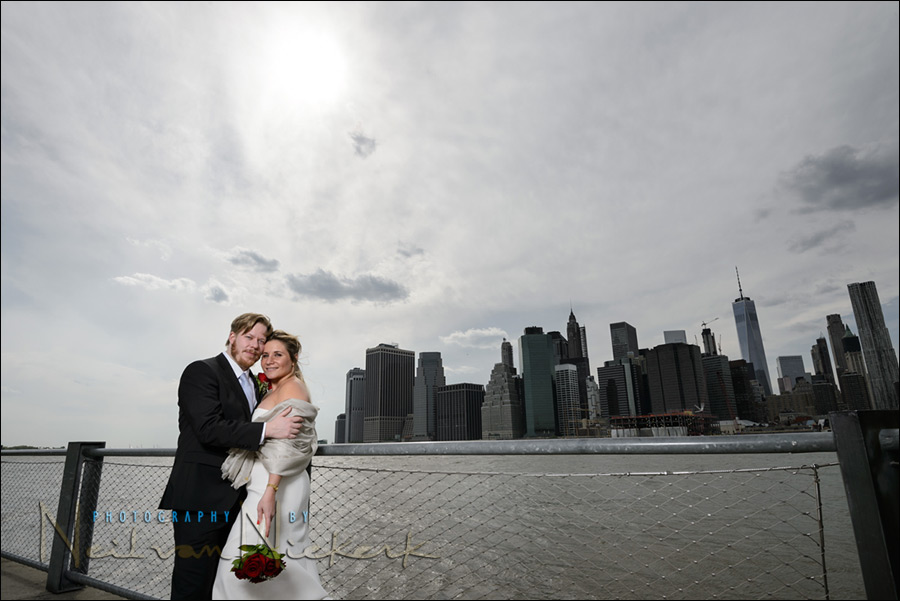 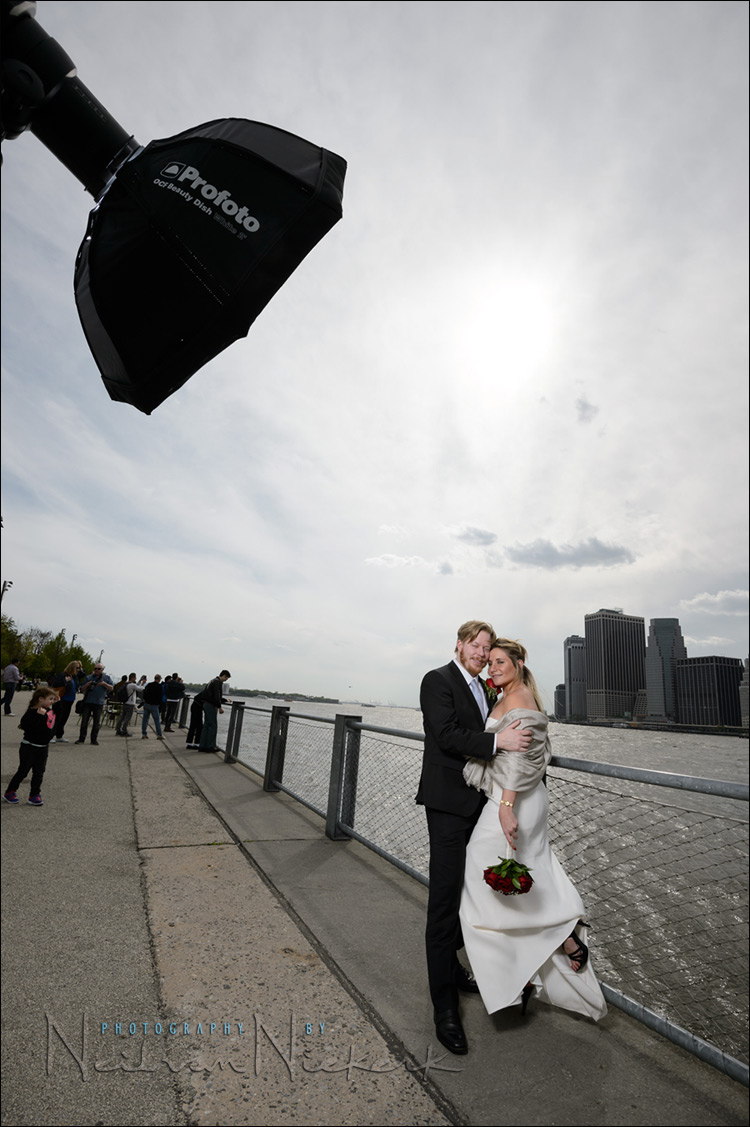 Of course we need the easily-identified skyline of Manhattan in a few photos. The day was overcast, so the easiest way to get dramatic skies, was to expose for the clouds, and then add flash. Even then, I had to use the Local Correction Brush in Lightroom / Bridge, to add contrast to the sky, and pull the exposure down even more.

In the first photo, the focal length was 19mm. However, I did change this up as I recomposed various photos in a sequence. Don’t get stuck on one view. Change it up! 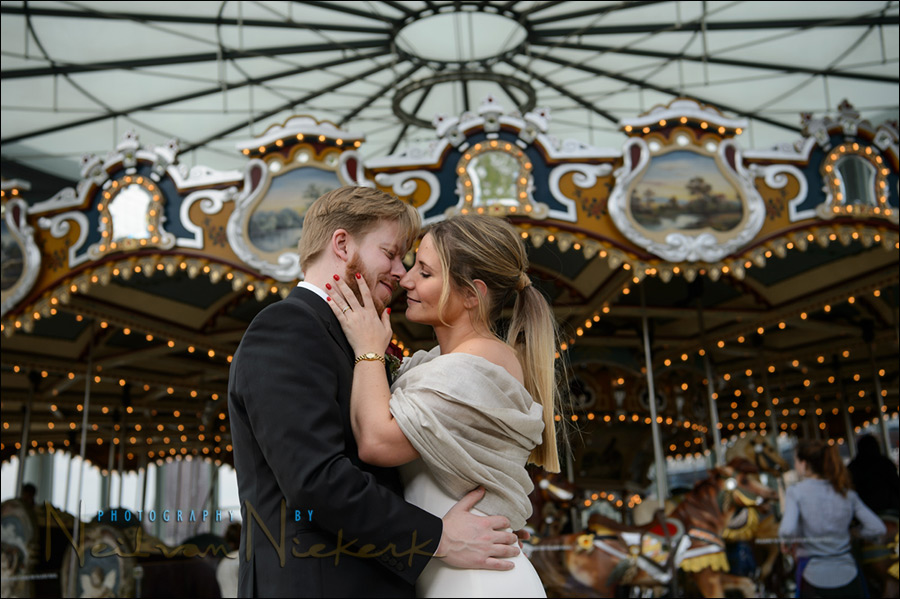 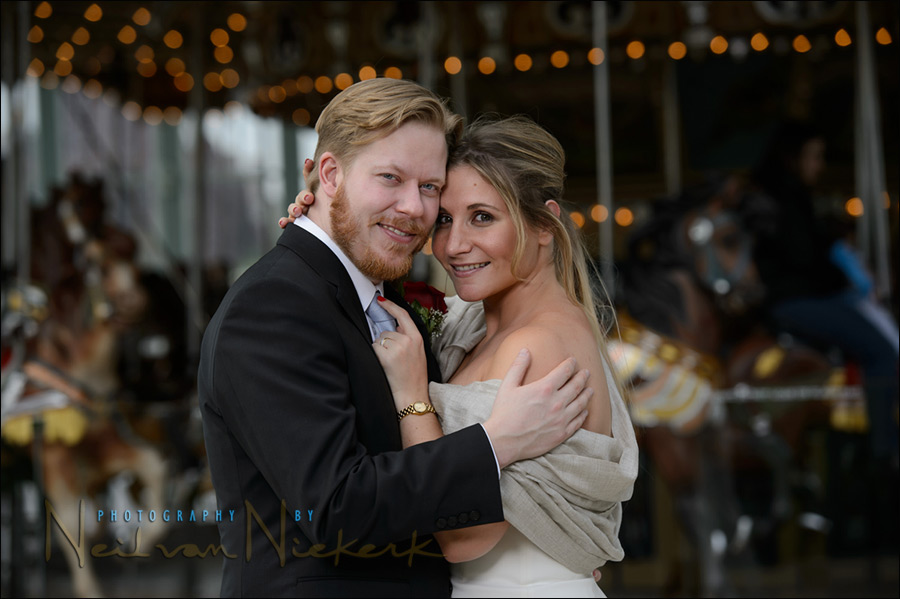 Even though it weighs me down, I love working with two cameras. The one has the 24-70mm permanently on it. The other alternates between the 70-200mm for tighter portraits, or the ultra-wide for more scenic shots.

In this way, I often alternate between the two lenses, by bringing either of the cameras up to my eyes. Both cameras to the same settings for simplicity and consistency. I hate changing  lenses because it slows me down, and potentially interrupts the flow of the photo session. If I need to change lenses, I do it before I start shooting at a new spot. This way, I can shoot un-interrupted, and move around, always concentrating on getting the photos. 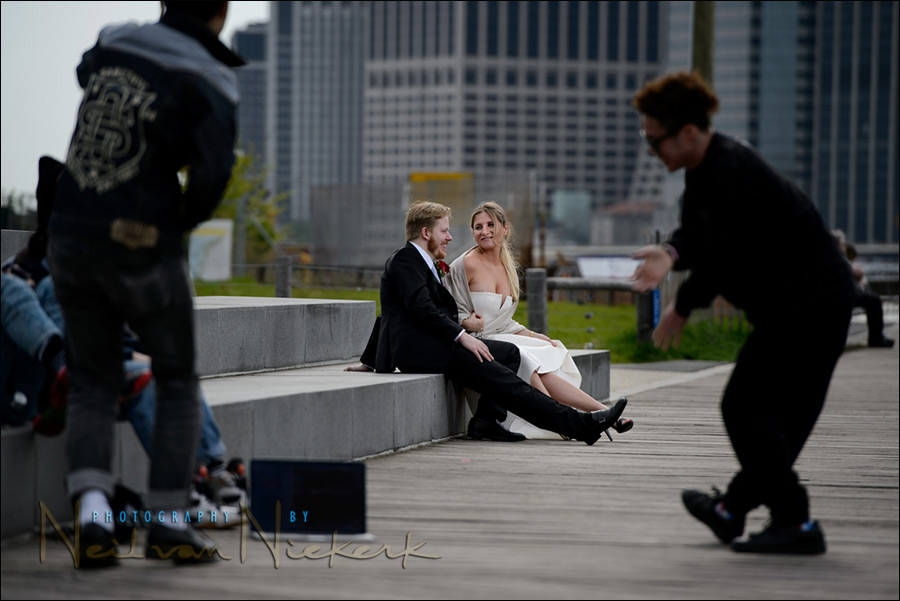 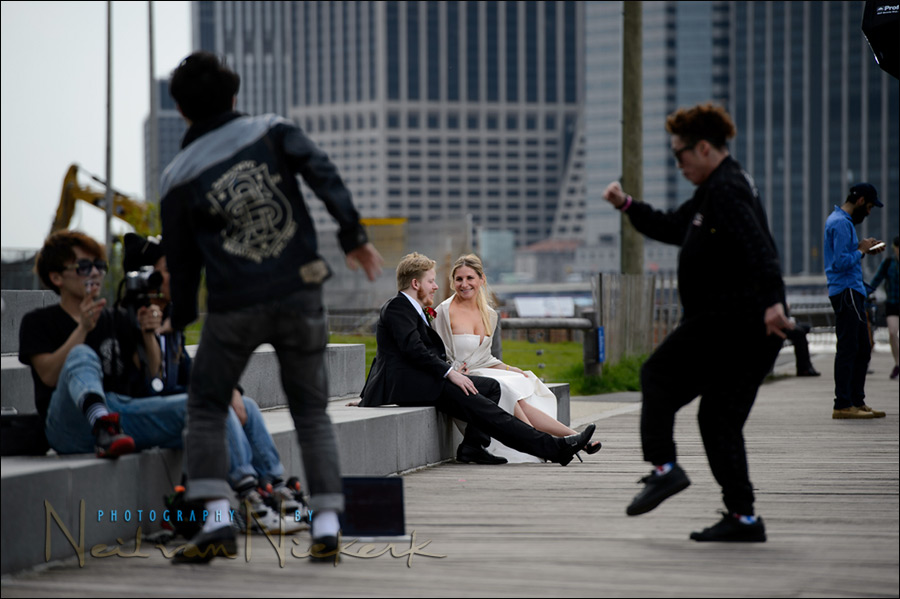 With an elopement wedding photo session, or an engagement photo session, I am always on the lookout for ways to give a diversity in the final selection. Especially with an elopement wedding, it is important to add any of the city life and things that make New York the city that it is. Here, out on the Brooklyn waterfront, there was a crew of dancers / musicians, with their laptop and a video camera, playing music and filming themselves. When I lifted my camera, they were super-nice and wanted to move away … but that’s not what I wanted. I wanted them in the shot!

Racking my 70-200mm to 200mm for maximum compression / isolation, I was able to throw the performers sufficiently out of focus, and wth the flash, I was able to under-expose the surroundings a bit – giving the couple a kind of gentle spot-light to have them stand out. With everything else under-exposed to some extent, the couple really stands out.

Even though this was a random find, every part of my decision process was specific. The camera settings, and the choice of lens and focal length. The lighting. All quite specific within what was capable here in a near-spontaneous way. 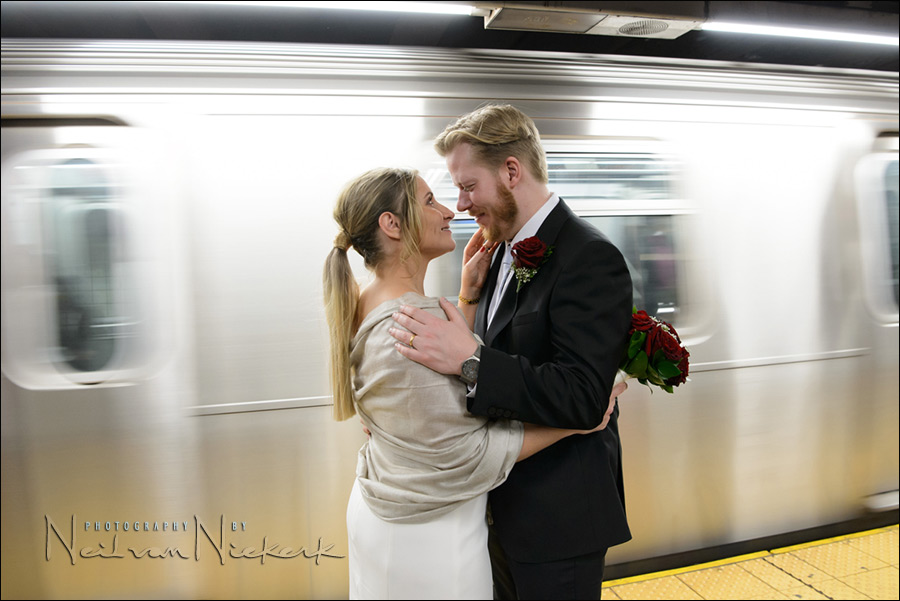 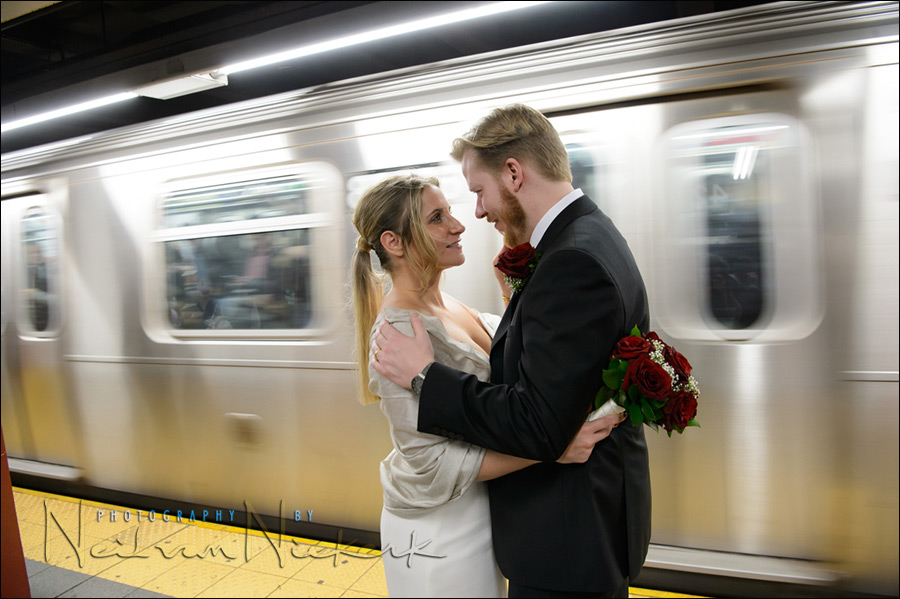 The New York subway is iconic in its own way, and always makes for an interesting background. Available light only. The stabilized lens allows me to shoot at sl0w-ish shutter speeds and still get sharp images without effort. The final stop for us was at Grand Central Station. One of the previous times that I photographed there was with Anelisa as part of my review of the Profoto B2 flash. Security was nicer to us this time, and didn’t ask us to leave. It must be the effect that a bride in a white dress has. Everyone is just nice!

Here the stabilized lens really proved its worth as I pulled the shutter speed down to 1/2 second to blur the movement of the people in the background.