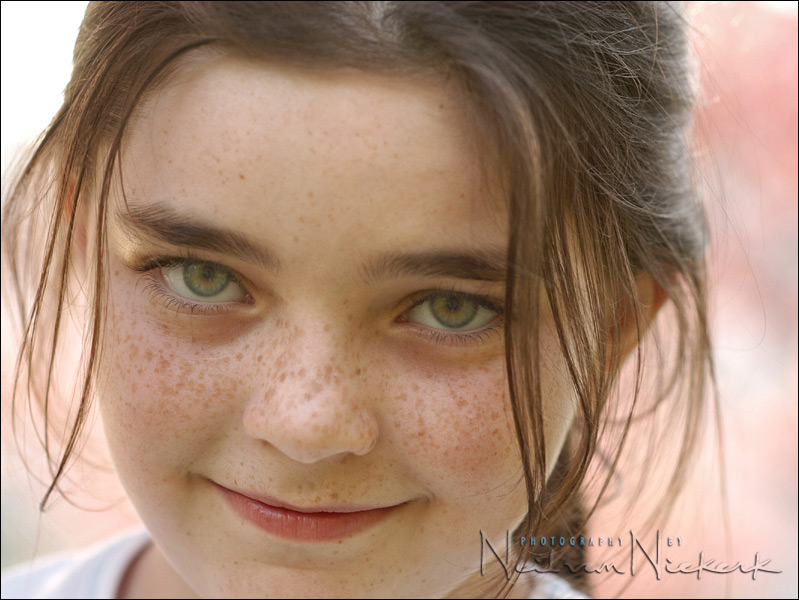 This just might be my most favorite photo of my daughter, Janine. It’s from 2003 when she was 9 years old. I was trying out my new Nikon D100, reveling in being able to instantly see any photos I took. We were outside in the garden area of the apartment complex we lived in at the time. With a long focal length, I concentrated on capturing her expression, and some element of who she was at the time – that interesting blend of confidence and shyness … and a fortunate dose of just indulging her dad with the new toy.

Simplifying the composition, the photo is all about her expression and those soulful eyes. She still has that. But she has grown into a confident young woman.

She’s currently (2013) studying to become a Chemical Engineer and doing very well at university. Yup, she’s bright. That obvious intelligence is also blended with an amazing confidence now. She always was independent; even more so now as a young adult. There’s an individualism there that I can see others are drawn towards. Magnetic. It’s astonishing at times to watch her interact with other people with an assuredness I didn’t have until much, much later in my life. I’m very proud of her, and in a large way also in awe of who she is. She’s an incredible person to know. Even more so as her dad.

It’s interesting to look over the older photographs now, trying to recognize traces even then of who she is now.

And if I sound a little nostalgic, I am. She moved out of the house when university started in 2012, and she has gained momentum with her own life. So we see much less of her now.

While all the memories are intact, the photographs I have of her have an even more powerful resonance now. And I wish I had more photos of her.

Like any new parent, I shot rolls and rolls of film of her as she grew, but this tapered off as she grew older. In a way , as the “newness” of the baby was shed, we became more used to her as being part of the family. She’s just *there* with us; part of us.

Now I wish I had many more photos of her taken during later stages. And not just camera-phone snapshots, but more carefully crafted portraits like this image.

I think there is a danger there – if danger is the proper word – that we reach for our camera phones more readily than before, instead of using a “proper” camera to record events. Make no mistake, I do value having a camera and video-camera as capable as the iPhone on hand, everywhere. In fact, this weekend I surreptitiously recorded a 10 minute video clip as she railed about something. The gestures are amusing. Not that I’d show her now, but to her mother and I, this is an incredibly endearing thing to have. It’s very much her.

While having an iPhone / camera phone on hand is just dandy, I think that as photographers we easily become a little too lazy over time. We gradually start to neglect to properly photograph those who are dear to us with better cameras than just our phones.

So this post is a touch self-indulgent as I reminisce, it’s also a gentle reminder to everyone that there is real value in taking the extra bit of time and effort. We shouldn’t stop taking careful, meaningful portraits of those who touch our lives. With time, we’ll be ever more glad we did.

To counter-balance the sweetness of the photograph at the top, here are a few anecdotes from the past year … 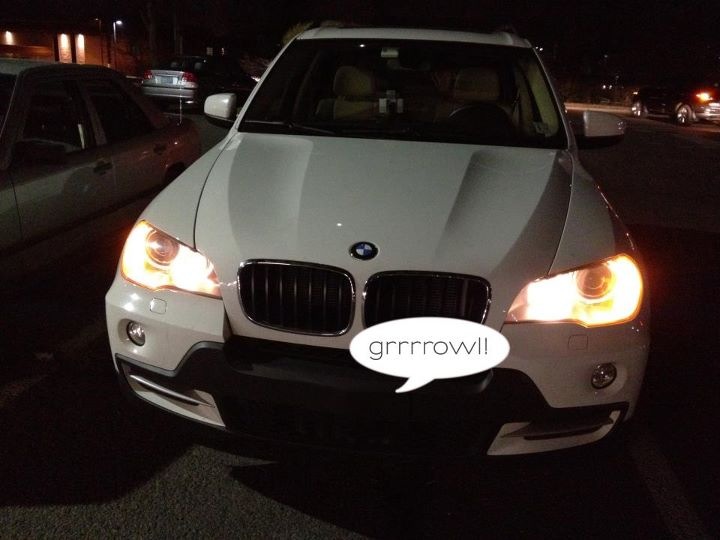 That’s my car, Grrrrr. No, I don’t give names to inanimate objects, but it has such a nice purr to it, that it just seemed apt to call it Grrrrr.

Driving my daughter back to the dorm one evening, I floored the accelerator of my BMW X5 between intersections in Manhattan to get ahead where two lanes narrowed into one lane. My car sprang ahead with a comfortable Grrrrrowl … and I turned to Janine and asked, “Did you hear what my car just said?” She drily replied, “Yes, it screamed ‘douchebag!'”

During the past 6 months she’s lived on campus in Brooklyn, she has really taken the idea of living in New York, to heart. She’s constantly exploring and visiting new friends. Her life story is now abbreviated as, “I was born in South Africa, but I now live in New York.” Yup, quietly skipping past the twelve years in New Jersey.

In amusing ways, it seems like the time she’s spent living in Brooklyn, has rubbed off on her. One weekend when she was visiting us, she had to install the Windows OS on her Mac. (Her University studies require a Windows computer.) She was getting more and more frustrated with the Microsoft website, ranting how a freshman student could program it more logically. The final straw was when the error message popped up saying, “This page can not be displayed”. Her reaction was an exasperated, “Bitch, I will cut you!” Even more amusing when you know what a gentle person she really is.

The times with my daughter are still little adventures, even now. Perhaps the most memorable in the past year was the mad dash on the night of the general election here in the USA. We had to fetch her from a random bus stop to get her to the voting station in time … and we got her here with 2 minutes to spare! She walked out, exhilarated afterwards, two thumbs up!

What happened was that since the election day was shortly after Hurricane Sandy wreaked havoc on the East Coast. There were still massive traffic delays that evening from New York (where she is attending university), to where she is registered here at home in New Jersey. She finally arrived here after frustrated hours, waiting in line for the subways and buses. So when we got her to the voting station just in time, with just those two minutes to spare, it was a huge relief. Exhilaration. As immigrants to the USA, it was an important (and emotional) event for us that day, voting for the first time and taking an active part in the shape our adopted country is going to take.

Now I’m just rambling. The point of all this – make sure that your personal photography is elevated above mere snapshots. Take the time and make the effort.

Some of you may want to know the camera settings, and details about the lens used for that photo at the top. Sadly, I can’t give it to you. I don’t have the original file. An inconvenient hard drive crash way back then, meant that I had lost a number of images that were of real value to me. And all I have left of that photo sequence, is the one web-sized photograph. Lesson learnt, and from there on I made sure I had more than one back-up of everything.

So make very sure that you do keep those images safe, and don’t risk a devastating loss to your data and photos. Think in terms of worst-case scenarios when it comes to data loss. The precautions are easy, and options aren’t expensive. Keep those photos safe!