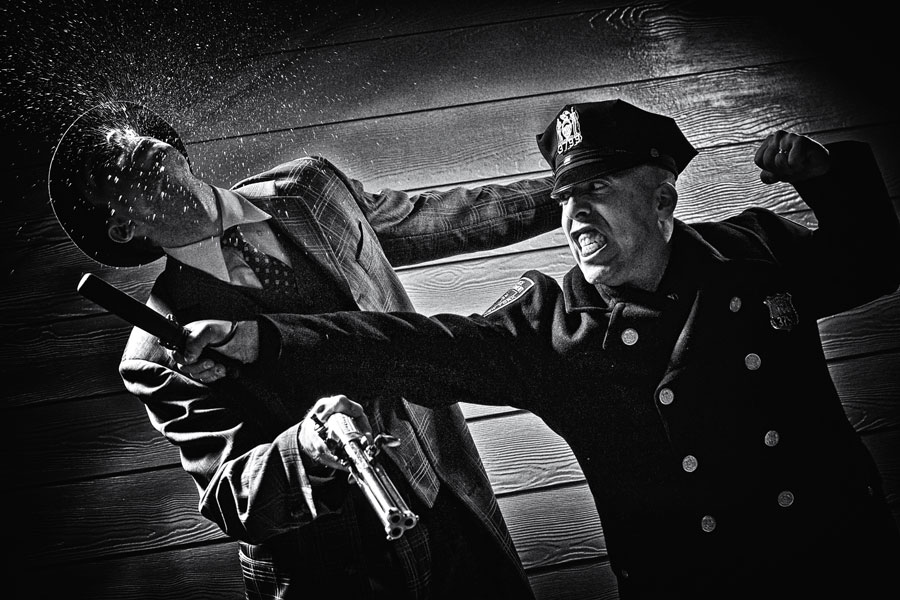 The Hudson Valley Click is a group of photographers in New York who arrange photo shoots for photographers who are interested in learning more or who would like to build their portfolios. I’ve mentioned them a few times in the past – photo shoot / haunted fashion / pin-up photography. With these photo sessions, they arrange for models and hair stylists and make-up artists, and for a small entry fee, you get to play. They are also pretty cool bunch of people to hang out with.

At the most recent shoot-out, the one organizer, Nuby DeLeon, showed me an image that he had set up, and my jaw dropped. With great pre-visualization of the intended shot, Nuby had set this dramatic scene up. Even the color image on the back of his camera looked perfect! Nuby was gracious enough to allow me to share this with everyone, including the lighting diagram …

Recently, I’ve had the opportunity to explore dramatic lighting during a themed shoot at Mountain View Manor in Glen Spey, NY. The themewas Film Noir so having a beautiful Victorian mansion to shoot in was a treat.

My inspiration for the shot is Frank Miller. I wanted to match the dramatic lighting with some dramatic, almost over the top action. 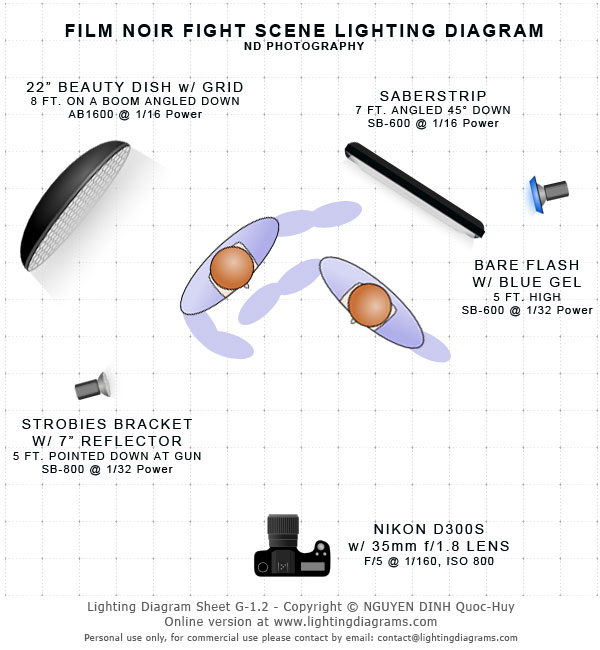 The first thing I had to figure out was the lighting. I knew the action was going to be at the point of contact and the spray of spit as the gangster, played by J.J. Oracz, was hit. For the main light I used a 22” Kacey Beauty Reflector with a Grid  attached to an Alien Bee 1600. I put the main light 8 feet up on a boom from behind the gangster. I put it behind the model for two reasons – one is to highlight the spray of water and the other is to create an interesting light pattern on the wall.

Next, I added a SaberStrip with an SB-600 inside to fill in the front of the gangster and also act as a rim light for the cop, played by Jose Flores. That’s what I love about the SaberStrip – it’s very versatile and lightweight. It can serve multiple purposes just by how you place it. Almost every shot I do I end up using the Saberstrip either as a main light, rim light, background light or accent light.

I added a third light to accent the gun because the shadows created by the main light ended up hiding it. For this I used an SB-800 in a Strobies Bracket (B&H), which came with a 7” reflector. This was perfect for focusing the light in one area while eliminating lens flare.

Finally, I decided to add a spot of blue light to mimic a police car parked off camera. Even though I knew the final image would be in black and white I still wanted to light it as authentic as I could get it. Having worked as a still photographer in a feature film cop drama I saw them using alternating blue and red lights off camera to suggest a cop car on scene. I took this same idea and added the blue gelled bare flash off camera right.

Now about posing – I put the cop in a static pose and told him to convey the action through his face because that is what was going to sell the realism. The gangster got ready with a mouthful of water and flipped his head back on cue. I tilted the camera slightly to add even more motion to the image. For post processing, I used NIK Software – Color Efex 4.0 and Silver Efex 2.