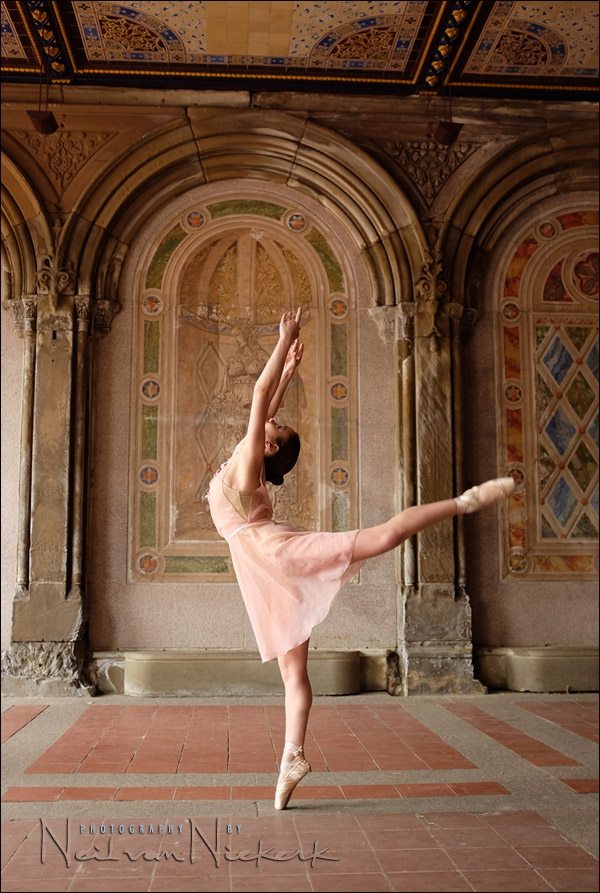 One of the most compelling cameras in recent years, was the Fuji X100. It had a slick retro look, solid build, and some interesting features such as the hybrid optical viewfinder. The camera looked quite sexy slung over your shoulder, and felt great in your hands. But it had a few flaws. Sluggish handling at times, and more crucially, erratic auto-focus. It tended to grab the background when focusing in low-contrast light. I loved my Fuji X100, but eventually sold it because of these frustrations. 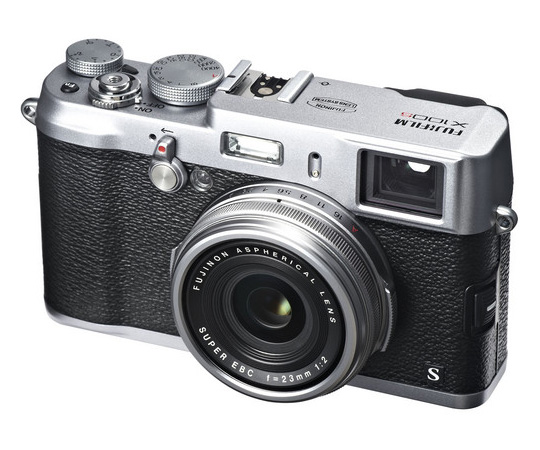 The awesome stuff that has remained the same 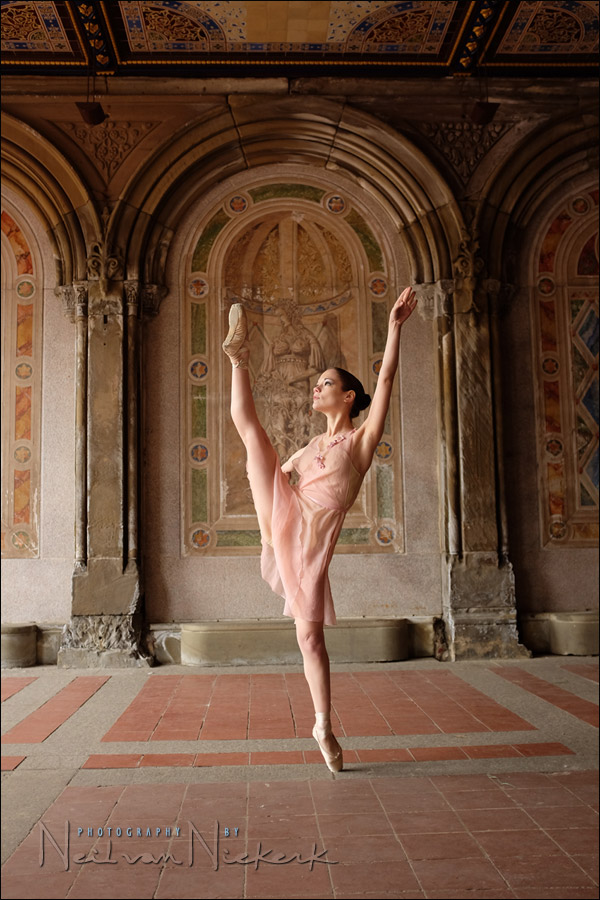 I’ve had the camera in my hands for the past two weeks, trying it out wherever I could – including a few trips to New York, exploring Manhattan on foot. But this Street Photography thing is tough – waiting for serendipity to kick in, looking for that beautiful intersection between moments, light and composition.

For these two images, I pre-focused on Viktoria where she stood, anticipating where her movement would end up. It made most sense to use manual focus here. Then, at the peak of movement, I had a split second to time my shot.

In the image right at the top, you can see her foot still move, and there is some motion blur.

Syncing flash with the Fuji X100s

What really interested me with the Fuji X100s (and is something you could do with the X100 as well), is sync your flash at higher than max flash sync speeds. The manual states that you can sync flash up to 1/2000 of a sec. Yes, 2000-th. That isn’t a typo.

For this setup, shooting directly into the sun, I didn’t want the sky to blow out to white, except the area where the sun is.The trees nearly silhouetted, with Viktoria entirely under-exposed. (See the comparison shot.)

Having done some tests in the studio to see how the flash’s effective power diminishes as the shutter speed is dialed up, I knew I would have to bring out something bigger than a speedlight.

So I brought the Profoto Acute B2 600 Ws powerpack (affiliate) to give enough juice. 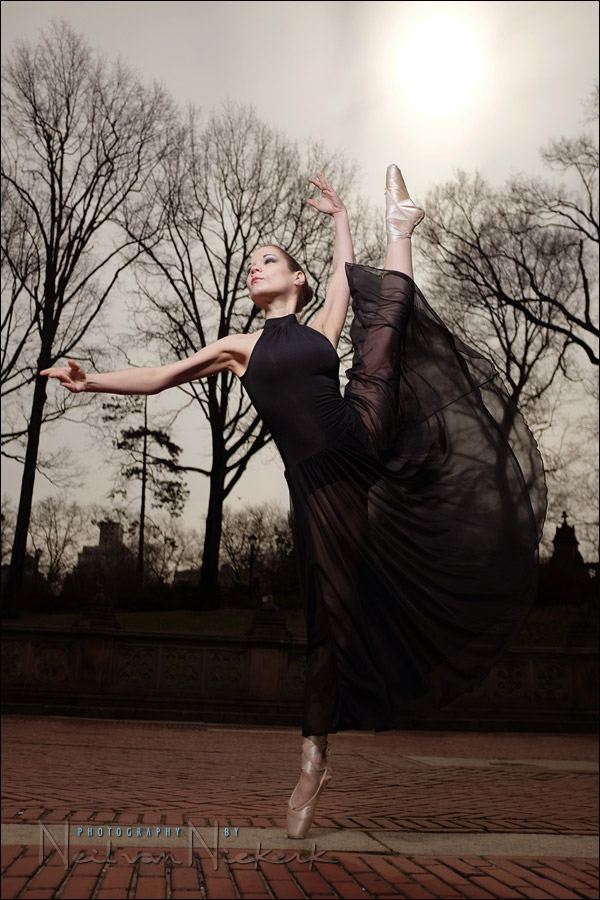 To still use the wide aperture, I engaged the built-in ND filter, which cut the light by 3 stops.

Since the Fuji doesn’t use a focal plane shutter, you don’t have the limitation of that ceiling with maximum flash sync as you do with DSLRs. You can sync at higher shutter speeds. But … before you get excited about this, there isn’t really any gain here. As you increase the shutter speed, the flash power is effectively reduced. It’s a near-linear progression, similar-ish to what you’d see with high-speed flash sync (HSS) on a DSLR.

We had to work fairly close to Viktoria to get enough light on her for that shutter speed setting (and ND filter). Here is the pull-back shot to give you an idea of the distance. (Viktoria had to stay warm while we were setting up.) 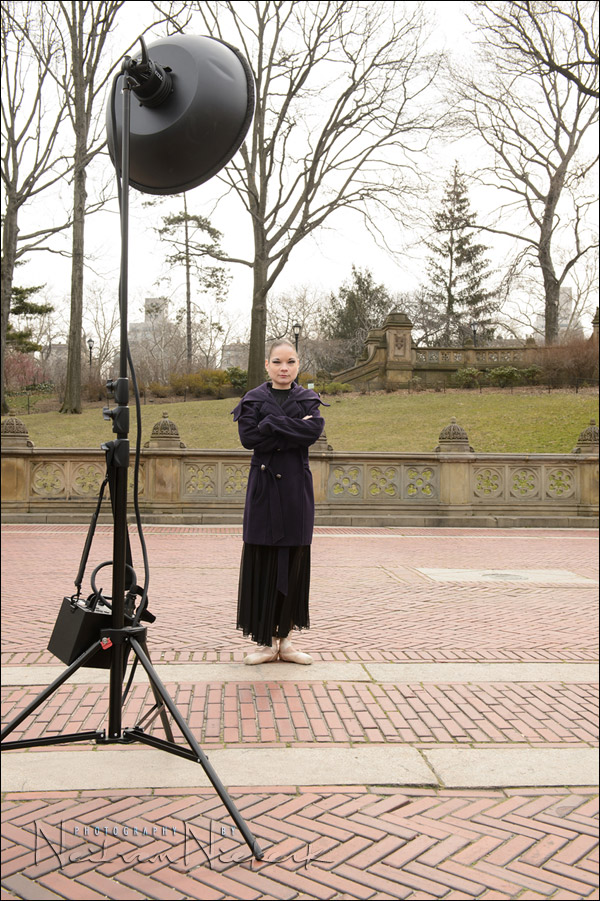 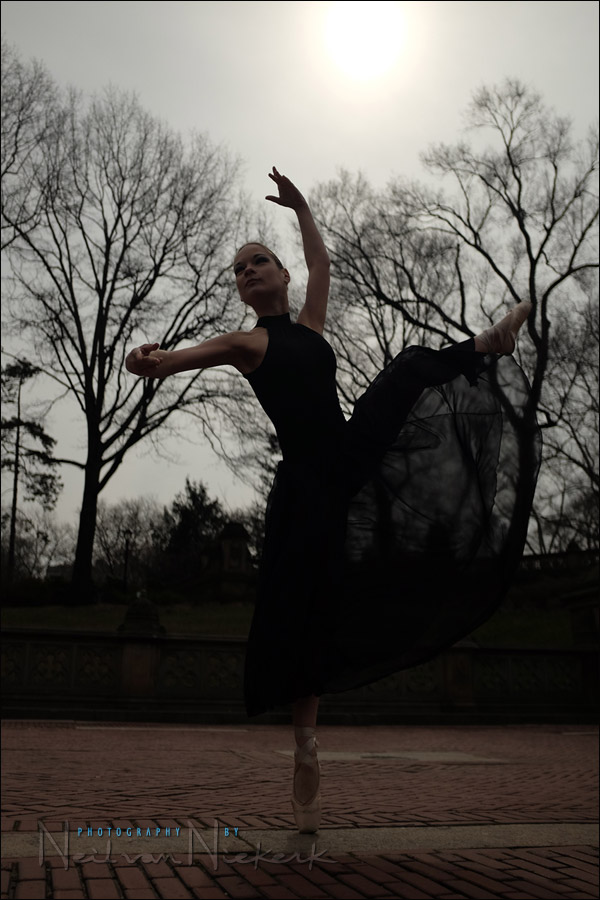 The idea that you can sync up to 1/2000 with the Fuji X100s sounds interesting, but in practice, it doesn’t offer a huge benefit. I certainly wouldn’t trade a DSLR and high-speed flash sync just for this. Still, an interesting idea to play with.

Ultimately, the effective 35mm focal length just doesn’t offer that much separation from the background at f/2 that a longer focal length would’ve. Now, if the Fuji X100s came out with a twin camera offering with a matched 85mm f/2 lens, then we’d be onto something!

When I first wrote about the Fuji X100, I was very impressed with the high-ISO. Even though it was an APS-C sized sensor, the image quality was nearly on par with my Nikon D3 body. The high-ISO noise of the Fuji X100s looks even better. I don’t have a Fuji X100 on hand to directly compare though, but have a look at the 3200 ISO images in the following links! I think you’ll be amazed.

I’ve placed various full-rez images in a folder so anyone can download them to have a look.
– low-contrast scene: warehouse wall
– medium contrast scene: castle

other sample images shot with the Fuji X100s

For these sample images, which are all JPGs from the camera, the Dynamic Range was set to Auto. The Film Simulation was set to Standard. Color, Sharpness, Highlight Tone and Shadow Tone were all set to (0) Standard. 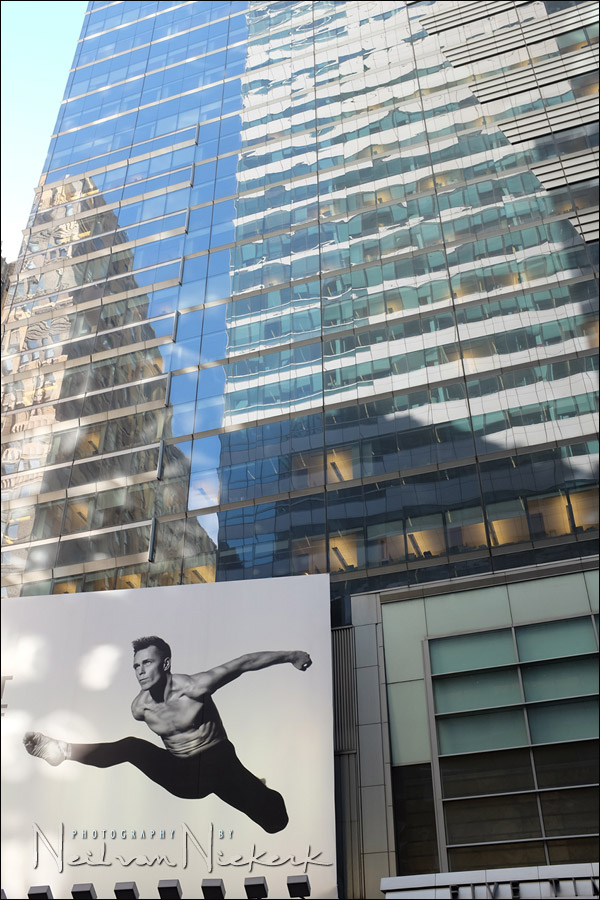 This is a question that has multiple answers.

The Fuji X100s certainly has a distinct character of its own. If you need more than just the 35mm-equivalent lens, then you’re better off checking the Fuji X-Pro 1 (affiliate) which has similar wonderful image quality, or the Fuji X-E2 (affiliate).  The Fuji EX-1 with the kit zoom lens is about the same price as the Fuji X100s (affiliate). So it is a strong contender for your attention. But the Fuji EX-1 doesn’t offer the Hybrid Optical Viewfinder. The OVF is such an amazing part of the X-1 Pro and the X100s that it is something that would sway me. There is a slight lag with the EVF that is disconcerting to a long-time DLSR user that is used to the optical view in the viewfinder.

There are all kinds of gotchas that will trip you up initially.

For example, I wanted to show the hybrid optical viewfinder (OVF) to a friend, but I could only get the electronic viewfinder (EVF). It took me a while to figure out I had accidentally engaged the macro mode. Then you only see the EVF. This makes sense. Because the Fuji X100s doesn’t give you that direct view of your scene like a DSLR would (via the mirror and prism), you get parallax error the closer you get to your subject. By the time you’re in Macro mode, you need to see exactly what you’re going to get, and then you need to look at the EVF. Fuji makes that your only option then. Rightfully so. But you need to know about this, or else spend a while foolishly going through the menu to try and figure out why the OVF doesn’t show.

So in many such ways, you have to take the time to know this camera. But once you get there – and it isn’t a difficult camera to  get to know – this little gem is a pleasure to work with. It is a very capable camera with wonderful image quality … as long as the single focal length isn’t a limitation.

The the Fuji X100s (affiliate) looks sexy, and it feels sexy .. and better yet, makes *you* look sexy. And that’s worth the price of the camera already.