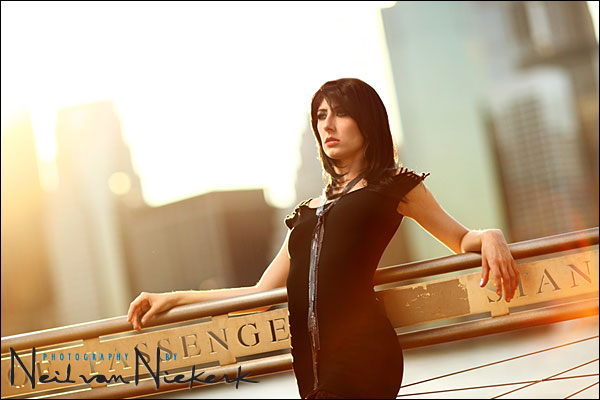 [ click on the photo to see a larger image]

Apathy Angel against the backdrop of the Manhattan skyline.

The settings for the image above was 1/2000 @ f1.6 @ 100 ISO, and the reason for the wide aperture was that I wanted to have the skyline appear as that dreamlike haze in the background.  The bright light though, forced a very fast shutter speed.  In this case 1/2000th would let the background over-expose a little and blow out somewhat, but give me some detail.   But to control the lighting on my model more specifically than just the available light, I used flash.

For the lighting here I used a speedlight in a Westcott Halo softbox (B&H) held up on a monopod by an assistant. This would give me directional but soft light on my model, Apathy Angel. 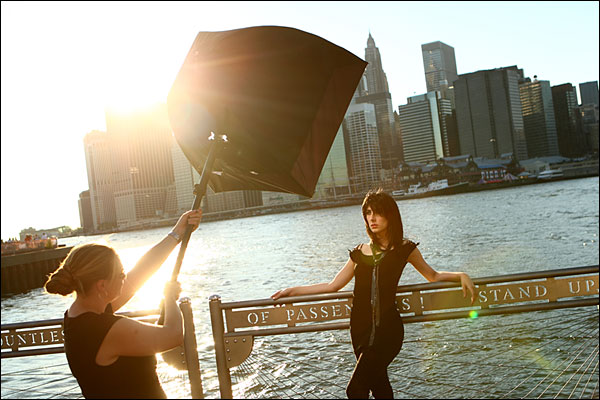 A year ago, to trigger an off-camera flash, you would have to rely on radio transmitters (such as Pocketwizards for example), or wireless TTL control.

With the traditional radio transmitters, there is no intelligence, and the off-camera flash would be in manual .. which has worked very well over the years. A real limitation would be that you’d hit a ceiling with the maximum sync speed. This in turn would force a specific aperture on you unless you started using neutral density filters and such to give a wider aperture in bright light.

Wireless TLL, in conjunction with high sync-speed flash technology would allow you to to go much higher shutter speeds (and hence wider apertures.) This does come at the cost though of reduced power (and therefore reduced range.) One of the big problems with wireless TTL, is that you need line-of-sight to control your other speedlights. This eliminates using the speedlight in an enclosed softbox, or in a position out of sight.

In the past year there has been incredible buzz about a new product, the RadioPoppers, which would allow any speedlight and camera capable of wireless TTL flash, to be controlled even when not in the line of sight of the master speedlight or flash controller on the camera. This is a huge benefit to photographers that need a reliable way of controlling TTL flash without the hassle of staying within a specific range and direction of the slaved speedlights.

The additional benefit is that high sync-speed flash photography can also be used with much greater ease and without the need of line-of-sight control.

That’s the background. Here’s the review … do the RadioPoppers work? Yes, very well!

In this next image, I asked my model to walk towards me, while my assistant moved alongside me with the softbox. I set my initial flash exposure compensation to give me a correct amount of flash for this scenario of the model wearing black against a bright background. I did this by simply checking my LCD preview.

Here I wanted more depth-of-field than in the image right at the top, so I stayed at the max sync speed of 1/250th and selected an appropriate aperture of f5 at 250 ISO. (The 1D mk3 has a max sync speed of 1/300th but I usually stay at 1/250th because I find it easier to work with 1/3rd stop changes, and the jump from 1/250th to 1/300th is incrementally small for any change in exposure.) 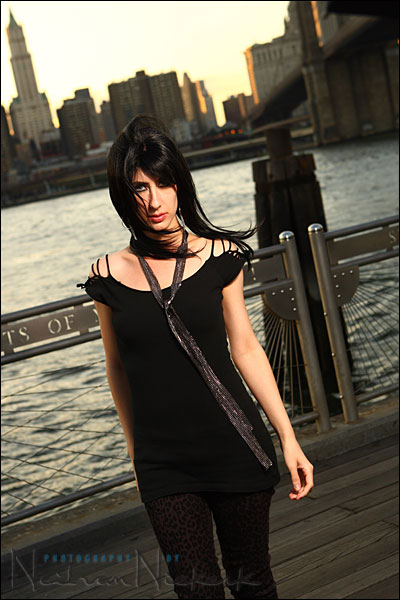 .
The next image was taken at 1/250th @ f8 @ 100 ISO since I wanted the background to be well exposed. I then used the speedlight in the softbox to throw light on my model. Since in this instance I was using TTL flash (controlled via the Radio Poppers), I just had to make sure I was within the range of what my flashgun could give out … and then I controlled my flash exposure with my flash exposure compensation button. 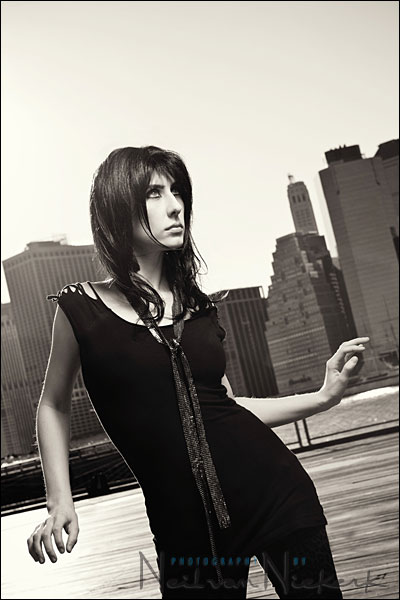 If this had been with manual flash in the softbox, it would’ve been as simple as asking my assistant to move closer or further away, in order to control my flash output. But with wireless TTL flash, I could control the output from my camera. For me it becomes easier to make minute changes from my camera without the need then to give continual instructions to my assistant.

I love the simplicity of using manual flash off-camera, but having this kind of control via my camera of TTL flash gives me even more options in lighting with flash. 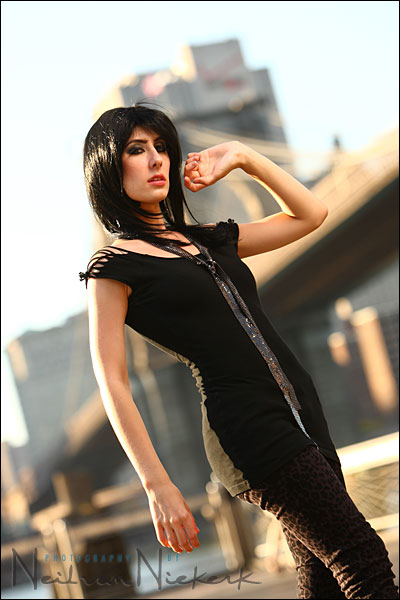 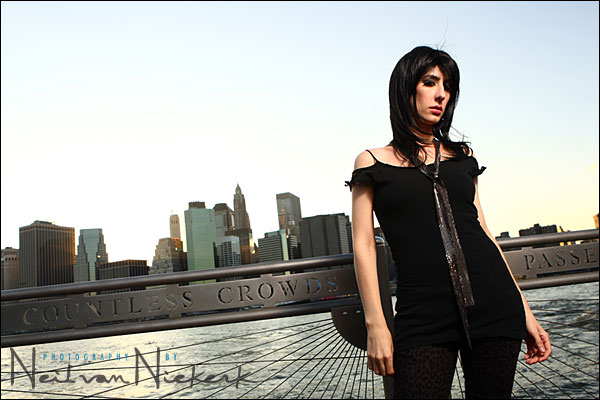 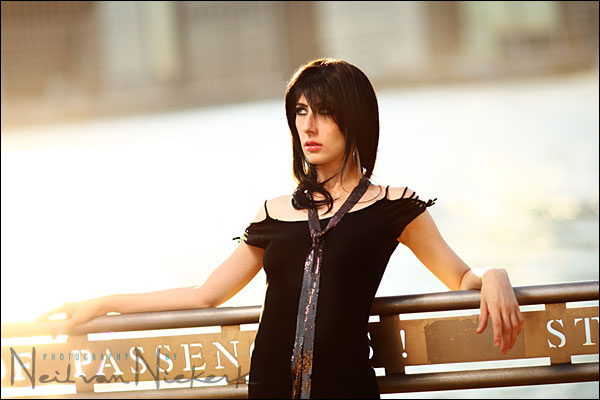 A little bit more about the RadioPoppers themselves:

The technology behind this is a remarkable bit of reverse-engineering. And not only that, the final product opens up possibilities with flash photography that had not existed before.

The downside to this being reverse-engineered, is that the actual bits and pieces of the equipment are not as slick looking or as simple to mount as the usual off-the-shelf gear we can buy. But for most photographers who can see the potential that the RadioPoppers offer, this is a relatively minor issue.

The only real negative that I found with the RadioPoppers is that you need a screwdriver to change the battery. This could be a real problem on a shoot.

The RadioPopper transmitter is this small box which just sits on top of the master speedlight. It is held in position by strips of Velcro that comes with the kit. (I added the hairband that I stole from my daughter, to keep it firmly in place.) There are no connectors, since the RadioPopper transmitter picks up the necessary signals directly from the speedlight itself. 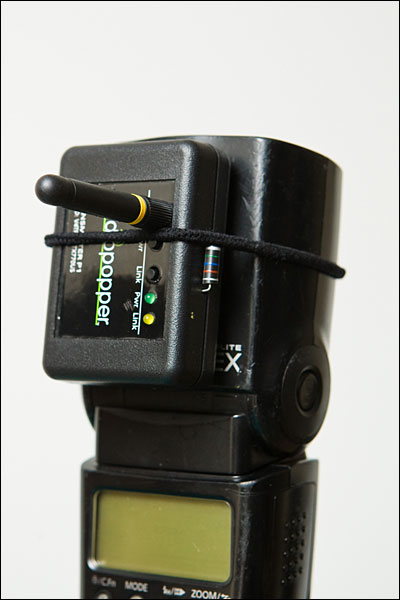 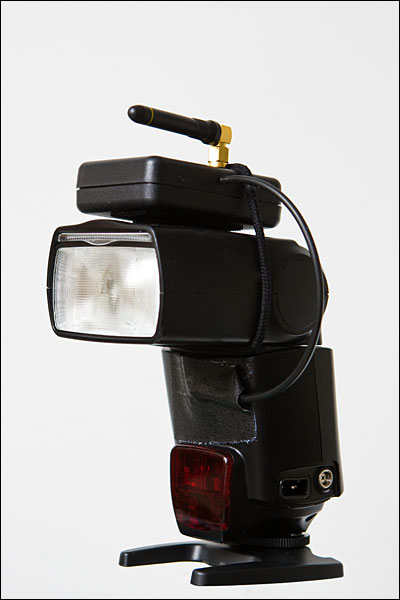 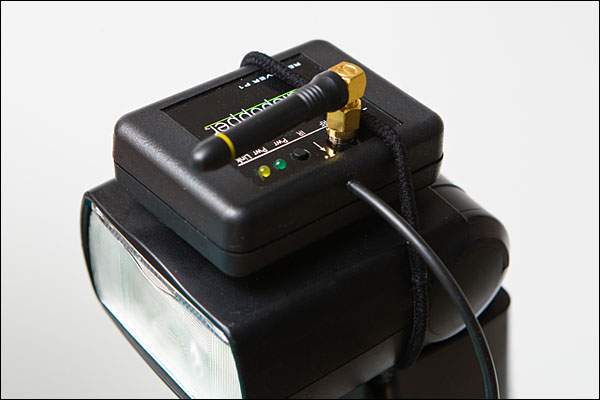 To sum it up, I am impressed with the relative simplicity of using the RadioPoppers. Anyone who is familiar with wireless TTL flash will immediately be able to use them, and find a use for them.