Always busy, the most recent project that I was busy with, was for a client who had asked for a way to show their various commercial properties in a dynamic way. I had to help them show their warehouses and buildings in a non-static interesting way. I suggested time-lapse photography, and they accepted my proposal.

With time-lapse I could create a video clip that is dynamic in a way that isn’t possible with stills or even video. Above is a shortened version of the final project.

I have created other time-lapse clips with my Nikon D4, which was made easier with the built-in time-lapse mode of the camera. What I envisioned, was that as the day progressed, the shadows would move, and clouds would move. With the Dynamic Perception Stage Zero dolly, the camera would move as well, and it would be possible to get a final video clip that had an unusual cinematic quality to it that wouldn’t be possibly any other way.

All of this sounds easy stated like this, but there were a few challenges: 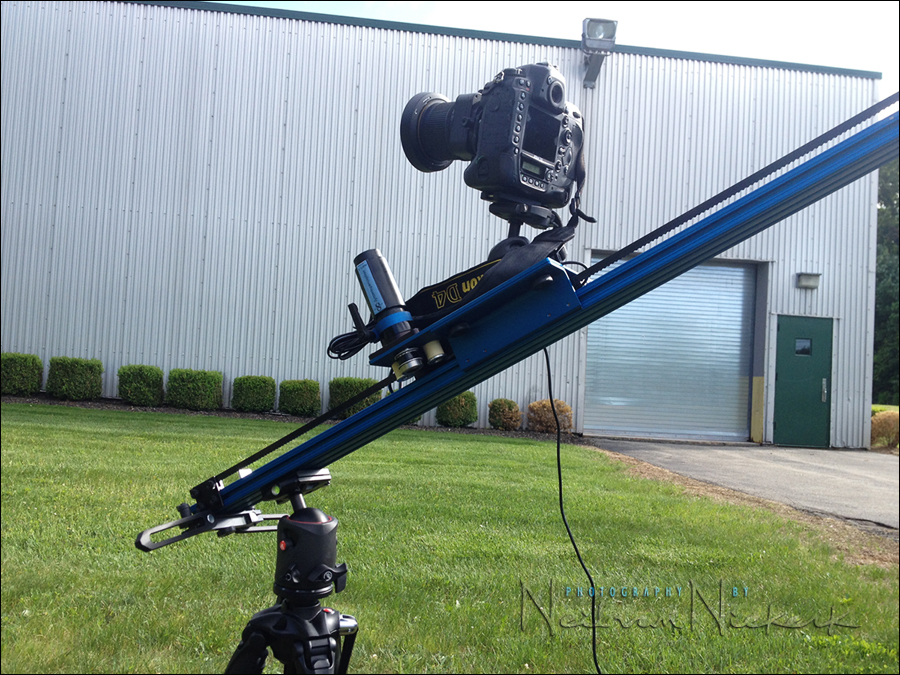 About the video clip

There are a total of 12 sections shown here, each about 4 seconds long. I did tests, and 3 seconds were too short – your eye didn’t quite have time to rest and grasp what you’re seeing. When I did tests, 6 seconds felt a touch too long for this subject. (With time-lapse clips in New York, I felt that 10 second clips were about optimal, because of how busy the street scenes were.) So I decided on 4 second sections. In retrospect, 5 seconds might have been better because of the final video which had cross-fades which took up a tiny bit of time. It’s funny how such short timing durations make a difference.

The opening shot is actually reversed. The sun was going down, and the shadows of the trees rose up against the side of the building. I needed an opening clip, and I thought it would make a great reveal, if played in reverse.

The final clip was an obvious choice for me to use at the end, since it went naturally towards nearly all black. So it was easy to fade out.

There are two sections which for me worked beautifully, with the sun popping in in the left-hand top corner. It held the two clips together, even though the motion changed from L-R to R-L.

Clouds helped when the warehouse looked exceptionally bland. But only if they moved over in the background, and didn’t create long periods of darkened landscape. I lost days of shooting time because of cloud cover and rain. I needed sunshine for these clips, because I needed the movement of the shadows across the building facades.

Most of these clips took between 30 mins to 2 hours for the camera to move. This meant that I preferred to shoot earlier in the day, and in the late afternoon. The shadows moved too slow when the sun was overhead, compared to when the sun was much lower in the sky.

I used fairly slow shutter speeds for most of these – around 1/8th to 1/15th of a second. I wanted any movement in the frame to be as smooth as possible. Even then, some of the trees have leaves which jittered a bit too much for my preference. I did use polarizers and ND filters to get around this.

Which brings us to choice of gear:

Photo gear (or equivalents) used during this shoot

For lenses, I mostly used two lenses. (I’m listing the Canon equivalents along with the actual Nikon lenses I used.)

I started with my trusty Nikon 14-24mm f/2.8G AF-S (Amazon), but it was limiting in that I couldn’t get slow enough shutter speeds, and this lens with its monstrously large front element doesn’t allow polarizers or ND filters. So I bought the Nikon 16-35mm f/4G AF-S VR (Amazon) because it takes a 77mm filter.

The 16-35mm range was quite useful, however, I shot most of the clips with a 24mm tilt-shift lens:

Tilt-shift lenses are invaluable with architectural photography. You’re able to correct for leaning verticals when you shoot upwards. I ended up only partially correcting for this, because the movement of the dolly changed the perspective somewhat. So I settled for a visual “this looks okay”, and would use that setting on the lens.

With this project, I knew I would be shooting over a period of a few weeks, and it would involve lots of driving around. It meant that I wouldn’t be able to have an assistant with me, and I would have to figure out a way of doing time-lapse on a dolly as a one-man show. I quickly realized that I would have to upgrade my tripods if I were going to do this project solo.

Funny thing about gear – as we progress from being mildly curious to obsessed amateur photographers, and perhaps eventually tip over into doing this professionally – we are often stuck with gear we bought as amateurs. Gear that works nicely, but might just be a touch short of being ideal for professional use.

This happened with me and tripods and tripod heads. One or two days into this project, I knew I needed to seriously upgrade what I have. I had three tripods of varying size. I had two larger ones which I had used for the Time-lapse dolly. But I realized what I needed most of all, were two identical tripods that would be supremely easy to set up. Keep in mind that I would have to single-handedly a 6-ft long motorized dolly. I would have to be able to set this all up without looking embarrassingly clumsy.

These are the tripod legs and heads that I settled on – an interesting combination of not-too-heavy, but quite sturdy:

The RC4 quick release is a larger plate, and works beautifully with the motorized dolly. A smaller quick release plate like the Manfrotto Q2 plate was just too small and narrow. 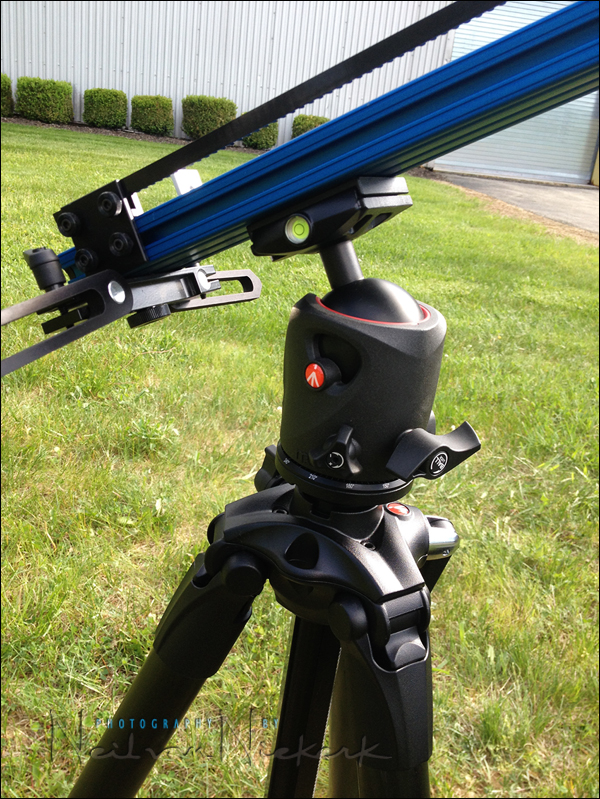 The 057 Magnesium Ball Head was also perfect in that I could use one hand to tighten the ball-head with a flip of a lever, and secure that end of the dolly (clipped into the quick release plate), while leaving the ball-head itself only semi-tensioned. Enough tension to help secure the dolly, but not so tight that it was inflexible to me moving the other end of the dolly still.

Setting up these tripods like this, as a single person, is more difficult to describe in words than actually doing it. These tripods actually made me look less-than-clumsy. I like that. One thing I hate more than struggling with gear, is the appearance that I am struggling. No viral Youtube clip yet of “Guy Struggling with Tripods.” Not this time.

Since a single 5-second clip could take 2 hours to shoot, nevermind setting up and doing short test runs, meant that there were oodles of time that I had to keep busy. So I took my MacBook Air with me, and a WiFi hotspot, so that I could keep working while the camera slowly crawled along the motorized dolly.

To bring the shutter speed down to have more flowing time-lapse sequences, Neutral Density filters and Polarizing Filters are also essential.