With even smart phones now offering a Time-lapse Photography mode, this interesting area of photography is accessible to anyone. For the smooth, professional-looking time-Lapse sequences you see in movies and TV series, you would have to put some thought into how you control your camera – and specifically, your camera settings for time-lapse photography. The smoothness of a time-lapse sequence is mostly dependent on the choice of camera settings … and there is a specific thought-process involved.

This does involve a bit of mathematics, but it is quite simple really. And there are always Time-Lapse Calculators available as apps for your smart phone.

There are a few things we need to be aware of, and decide on before shooting a time-lapse sequence:

The length of the final video clip is also something we need to decide on beforehand.  This of course ties in with the intended use of the video, and whether it will be added to a longer video clip. Generally, 1 minute is really long – Youtube metrics show that people usually click away at around a minute.  So decide whether you need 10 seconds, 20 seconds or 30 seconds, or however long we need.

What kind of subject movement do we have?  i.e., speed and flow of movement. Clouds, water, cars, moving people, etc,  all have slightly different considerations with what will translate best in a Time-Lapse video clip.

These three things:
– duration of the event,
– length of the final video,
– subject movement,
will help determine our shutter speed …. and our interval.

If this all sounds confusing, hang in there – this all locks in together.

The time-lapse video shown above has several different levels of movement – the clouds, people (static and moving), and traffic. Then on top of that, the camera is moving as well. So there are a bunch of things to juggle here in determining our shutter speed and interval.

This is also discussed in the video clip featured on PDN: How to shoot cinematic time-lapses

But let’s break this all down into steps:

The interval is the length of time between shots.

With that one number – the interval – we control two things:

For smooth movement, ideal is that our shutter speed should be at least 2/3rd of our interval. This will help give us continuity in the movement in our video. When our shutter speed is too short, the video will look jerky – like bad stop-motion.

Our persistence of vision creates the illusion of continuous, fluid movement. Our brains retain the visual image for a short while, to give us a sense of continuity.

Next step – we need to decide on the Frame-Rate that the video needs to be compiled with.

How fast should  your clip be played back?  30fps / 24 fps / 25 fps?  Our final decision will be made when we render the video, but it does affect our initial decision about our settings because frame rate affects our calculations.

An example of how we decide on our camera settings:

Scenario: Let’s say we have a cityscape with fast moving clouds.

Let’s say we decide on a 10 seconds clip, to be used in a longer final video. If we want a 10 second clip, it would be wise to add a 2 seconds buffer for fade-in and fade-out (for the video transitions).

How many photos are we going to take?

Now let’s calculate the interval and shutter speed and the duration of our shoot.

General advice is that clouds need an interval of 1 to 3 seconds. (This, and other subjects are also covered in Ryan Chilinski’s book on  Time-Lapse Photography (Amazon).

So for fast moving clouds, 2 seconds is a good choice.

With a 2 second interval, our shutter speed should be about 1.3 or 1.6 seconds. That will give us smooth movement.

That was fairly simple. And as I mentioned, there are Time-Lapse Calculator apps for your phone which will help you juggle these values.

If it wasn’t clear until now, it should be more apparent that we absolutely need Neutral Density filters of some kind to pull our shutter speeds this slow in daylight. The most common options are the 6-stop and 10-stop ND filters. 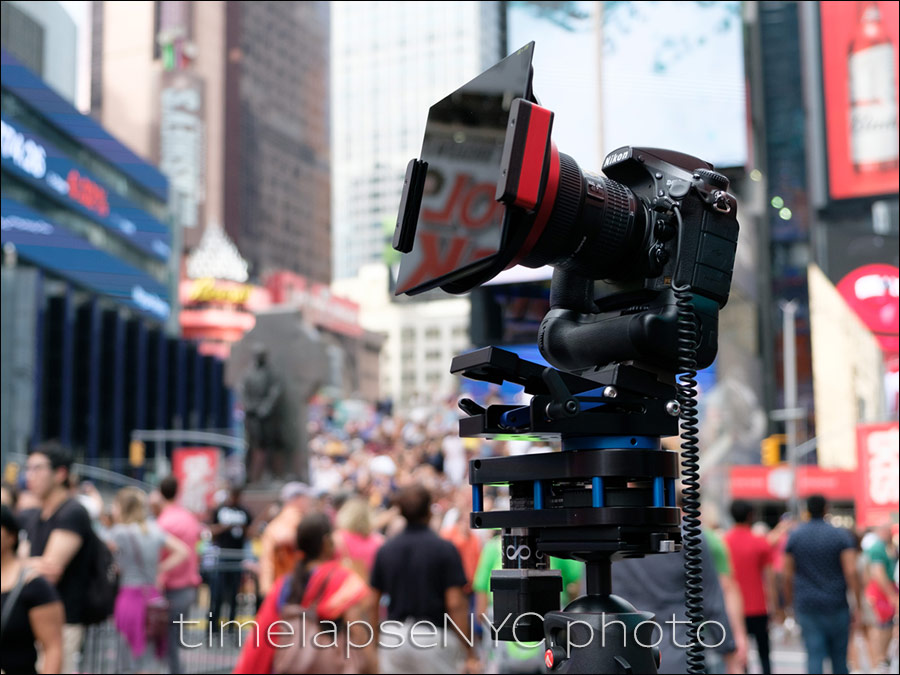 Ramping done manually in post, via Bridge … the hard way. The flickering lights of the displays there in Times Square appear to throw off the ramping device I used on the 2nd camera. So I used the footage shot on the one camera, and then manually did the exposure ramping during post.

My choice of camera for Time-Lapse Photography

If we consider that 1080p video is only around 2 megapixel resolution, and that even 4k resolution is only approximately 8 megapixel resolution, it might appear that the 36-megapixels of the Nikon D810 camera is overkill. Perhaps, perhaps. But it does allow me a lot of extra wriggle room in post-production. Let’s have a look how this impacted this video clip shown here.

Camera settings and details for this Time-Lapse video clip, shot in Bryant Park for a client.

Here is the screen capture of the full image. Since I tilted my camera up, there is perspective distortion. Because this was specifically about one of the properties surrounding the park, I had to correct for those leaning buildings. 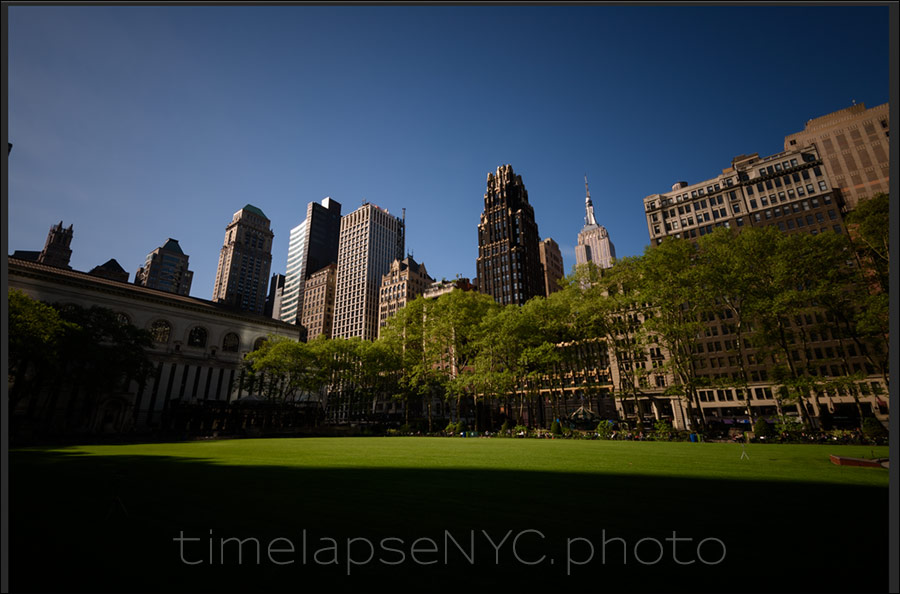 Correcting for this in post-production of the RAW files, left me with about a 24-megapixel image. Still a lot of detail. 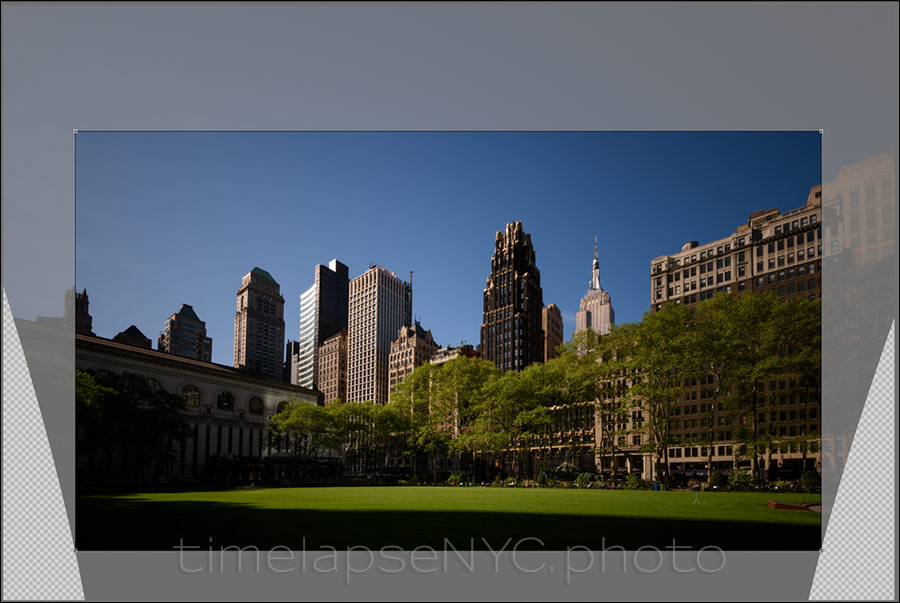 This comes in very handy with the zoom effect that was applied in post-production via Final Cut Pro X. I started off with defining the wide view as a Key Frame, and then I defined a tighter composition as a Key Frame. The final, tighter view is still larger than 2 megapixels. Hence, no loss in resolution as the video zoomed closer!

Here is one of the test clips I shot for the client a few days before, to explore different viewpoints, and to help me in confirming my exact camera settings ahead of time.

The first half of this clip was shot with 30 second shutter speed / 45 second intervals;
and you can immediately see how crazily rushed the movement of the clouds look! It might be useful for dramatic effect somewhere, but not in this instance – a more relaxed tempo is needed.

The 2nd half of that clip: 4 second shutter speed / 5 second intervals;
and the tempo is immediately more pleasing to the eye.

This comparison example, clearly shows that we have to put some thought into how we juggle the camera settings for a final result that is visually pleasing.

All of these things:
– the duration of the event,
– length of the final video,
– subject movement,
will help determine our shutter speed and our interval … and ultimately, the success of our time-lapse video.