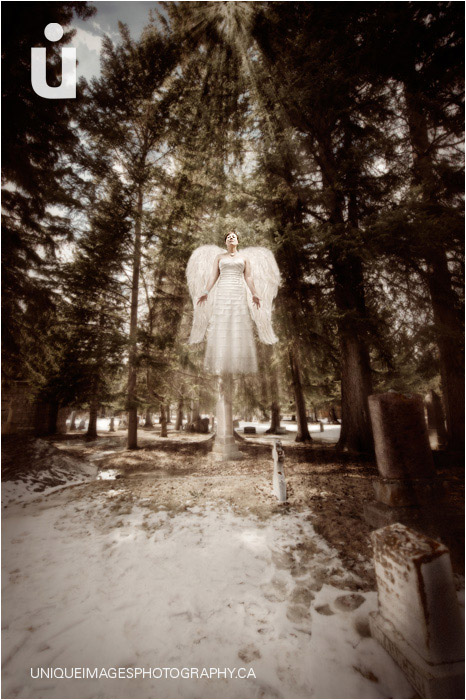 This week’s guest blog post is by a Calgary wedding photographer, Mark Pawlyszyn.  Mark’s style in his wedding photography has steadily become more impressive over the course of just a few years.   As such I am very honored that he agreed to a guest spot on the Tangents blog.

wedding photography – going above and beyond

Before I start into the main area of my blog article, I wanted to say that I really admire what Neil has done here. Tangents has always been one of the best resources around for learning flash and photography techniques. When I first discovered this place there was a wealth of information about how much you can do with very little equipment, and although over the years a lot has been added to this foundation, what Neil does so well is to show how great lighting techniques can be readily accessible to just about anyone.

But what if you actually enjoy time-consuming or complicated setups? For good or bad, this is something I tend to do. My motto is, why use one flash when you can use ten? (To be honest, I think the most I’ve only ever used at once was eight). I also like to plan things in advance, to have certain ideas for a wedding and try something new. It’s cool to have new poses and locations, but I also like to have complete concepts, like a theme within the images.

This image above is one example that comes to mind is from a wedding I did last winter. The bride contacted me shortly before the wedding to say that she wanted some photos in the nearby cemetery. She wasn’t into anything dark or gothic; she just wondered about the lives of the people there and if anyone still thought of them. So she sometimes visited, just to kind of make sure someone still thought of them. When she told me this I had an idea for an image—something positive, but with a moody atmosphere. I sketched it out and sent her an email to see if she’d be up for it …

Here is part of the email:

I was thinking about the cemetery and an idea popped into my head: how about a ‘risen angel’ type of shot?  You’d be floating above the ground—you can float, right?—with light streaming down on you.  I’ll attach a very poor sketch of what I am thinking of. 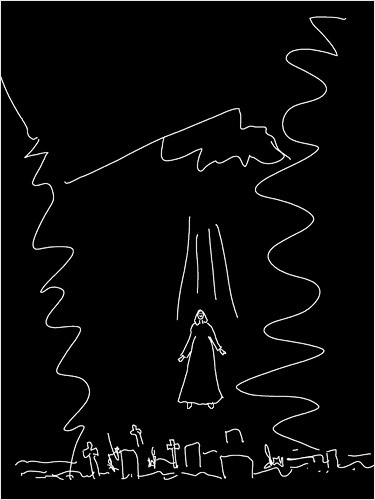 With a general idea in mind I now had to figure out how to pull it off on a wedding day. In the end I used a ladder to have her above the ground and took a frame without her in it so I could combine them and remove the ladder in Photoshop. I solved the problem of having the light pointing down from ten feet above the ground by talking the groomsmen into some heavy lifting. 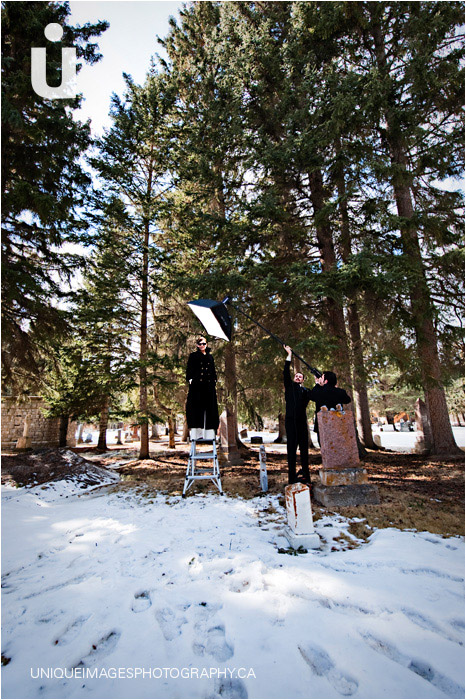 So that’s how that worked out.

On to the latest idea …

As a guy, I’ve been playing with fire from a young age, but I’d never actually ignited anything at a wedding. Well, except for one reception when I set my hair alight, but that was by accident. I got an idea for an image where the bride would be standing in front of a wall of fire. This is not a completely new concept (the photo, I mean, though fire has been around even longer). Fire has been used for quite a while in commercial photography in very large and expensive studios with special equipment and FX guys running around triggering this and that. Unfortunately, my FX kits doesn’t contain anything more complicated than duct tape. So I decided that in order to do this, the best way would be to rig up a portable wooden wall that could be assembled quickly by one of my assistants while I was doing other photos during the wedding day and when the time was right I could stroll over, douse it with something flammable, and get some cool shots. That was the theory.

Because a wedding is not the best time to practice new ideas when they require this much preparation I decided that we would do a test-run with a model one week prior to the wedding. I positioned a softbox on each side of the model, one feathered towards her but away from the wall, and gelled them both with orange and red gels—I think they were a full CTO and a Scarlet—and set them to a low power to balance with what I predicted the ambient to be once we lit the boards on fire. 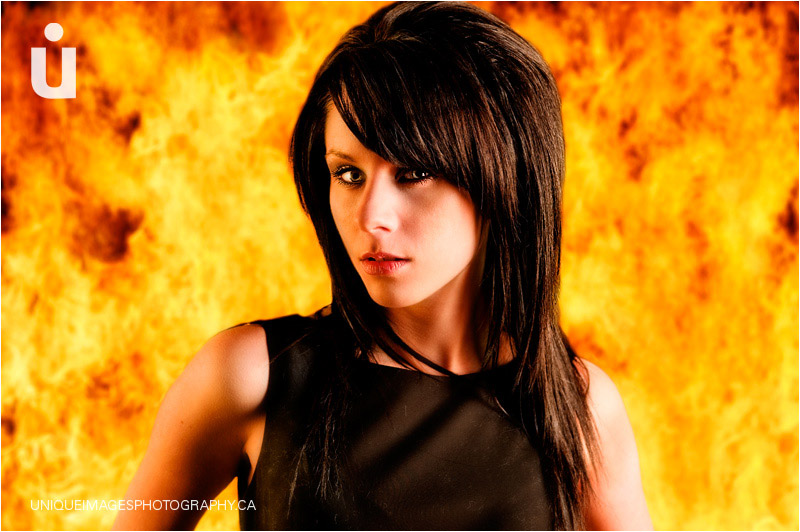 Everything went quite well and I was sure that with just a few minor tweaks we could leap right into it for the wedding that weekend. I planned how it would go: I had an extra assistant come out just for this; I scouted the right area on a friend’s private property in advance; we reviewed the safety aspects; etc. I considered everything! Except for the weather. It’s funny how below-zero temperatures, combined with blowing snow and ice, can put a damper on flammable activities. Despite three containers of kerosene and a blowtorch, the wall stubbornly refused to do more than fizzle and flicker momentarily.

I have a behind-the-scenes shot from the wedding, too, showing my two assistants and The Contraption. I had my second assistant Doug come out just for an hour to set this up, so we could move straight into shooting and not be slowed down on the wedding day. He lives close by. 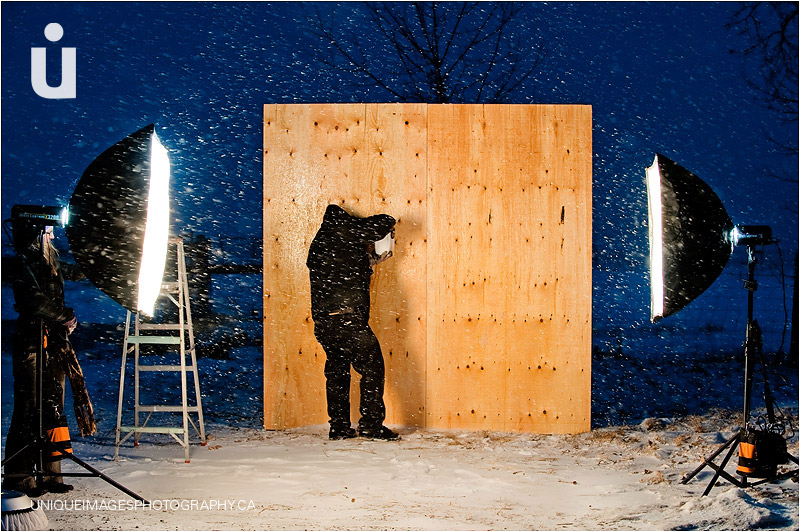 I’d left this idea until last, because I wanted it to be a bit dark so the flames would stand out, but time was running out, so we had to abandon it and head to dinner. On the bright side, because everything had been set up so smoothly, we didn’t waste more than a few minutes on this idea. Plus, of course, I had backup ideas. ;)

Here is a shot of the wedding party from about an hour or so earlier. The marshmallows were another idea of mine. That one worked! Can’t go wrong with marshmallows. 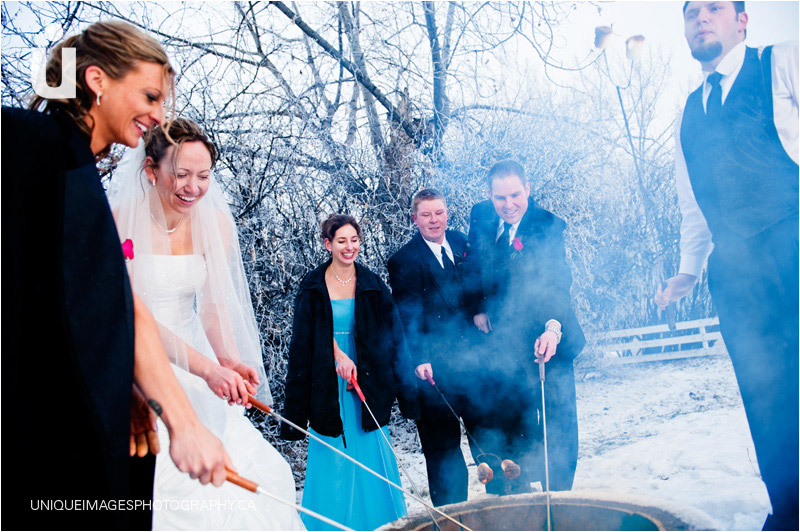 As for the wall of fire, next time I’ll try it in spring, on a sunny day!