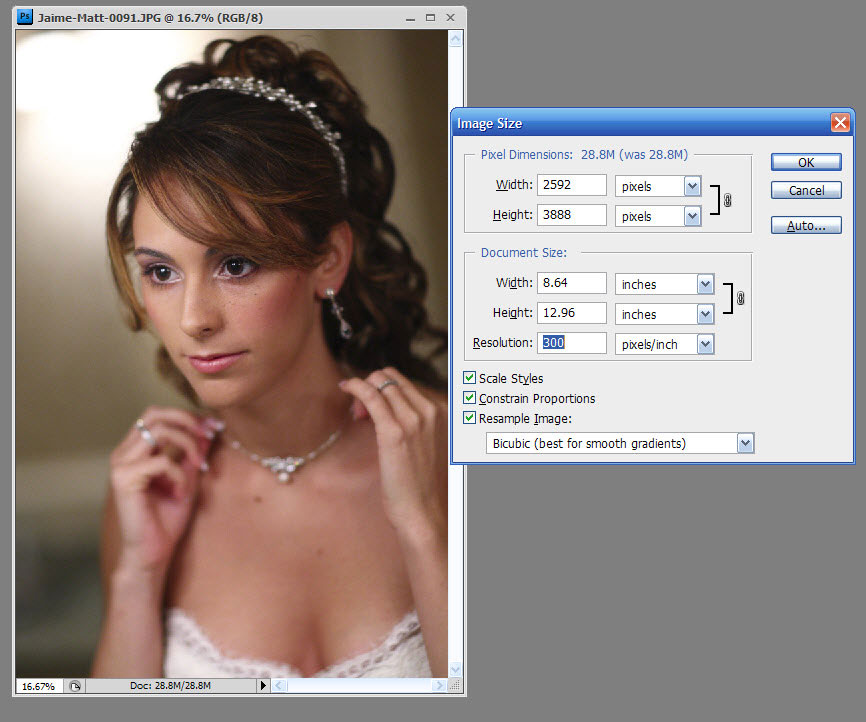 I live 20 miles at 65mph outside New York. Yes, that sentence is pure nonsense. I live 20 miles outside of New York. That’s it. The complete description of the distance. Now that 20 miles of course could mean either 30 minutes or 3 hours of driving, depending on traffic through the Lincoln tunnel. But I digress.

So why the strange title for this posting? Because as a digital photographer I see the same kind of nonsense perpetrated on a daily basis when image size is described in terms of absolute pixel dimensions (600 x 400 pixels) and a specific dpi such as 72dpi or 300 dpi also demanded. It  is unnecessary, or worse, confusing.

The math is actually very simple – don’t be daunted

I am sure everyone has seen image size requested as 600 x 400 pixels at 72 dpi. Or 300 dpi. When an image is described as 600×400 pixels, then the dpi (or ppi) value is of no consequence. It means nothing.  It has become the superfluous 65mph description. Since the actual image size is already described in very specific terms, (600 x 400 pixels), there is nothing else to add. That’s the size – the pixel dimension – 600 pixels by 400 pixels. We’re done. No dpi or ppi value needed.

Where the dpi (or ppi) value comes in, is in describing how large the image will be printed. But before we get there … people use dpi (dots per inch) when they mean to say ppi (pixels per inch). Dots per inch (dpi) is mostly a legacy term to describe how printers resolve detail. How many dots per inch it can print. It is largely meaningless to us as digital photographers.  ppi however, will describe how large the image will be printed at the current ppi setting. But the terms ppi and dpi are often used to mean the same thing. So it has to be read in context.

There are numerous articles about this on the internet, and a quick search will bring them up. Here’s a start.  And another.  And even more. There are so many articles on the subject that this posting hardly seems necessary, but it grates me when so many digital photographers clearly don’t understand something as basic as image size and resolution.

Let’s look at an actual image opened up in Photoshop, with the Image >> Size  dialog box open:

.
Looking just at the dialog box, the pixel dimension of this particular image is 2592 x 3888 pixels straight from the camera. If we do some quick math, 3888 / 2592 = 1.5 and this means that the aspect ratio of this image is 3:2 which is the usual aspect ratio for 35mm film cameras and most D-SLRs. This ratio of 3:2 also means that the image can be printed as 6×4 without cropping any part of it. You will have to resize it, but not crop it. But 8×10 or 5×7 which are different aspect ratios, will need cropping. 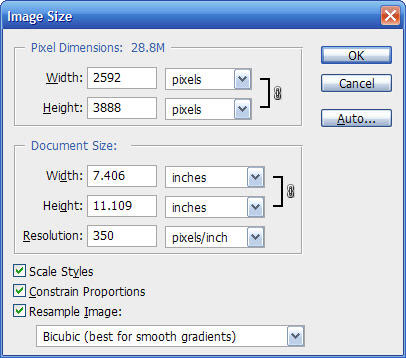 Still looking at the same dialog box as it opens to the default – if I wanted to use 350 pixels per inch, and I have 3888 pixels on the longest side, then simple math with a calculator tells us we can get an image 3888 / 350 = 11.109 inches wide. And there it is … the dialog box already did the math for us. We have an image that will print as 11 x 7.4 inches at 350 pixels per inch, if we don’t resize the image from the camera’s resolution.

The camera in this case was the Canon 1D mk3, and the specs say it is a 10 megapixel camera. If we look at the resolution, 2592 by 3888 and pull out the calculator again, we get 2592 x 3888 = 10,077,696 … and that is a touch over 10 megapixels – the resolution of our camera. Without resizing the file in Photoshop, that’s the pixel dimensions that the image will open up with. How large the image will print, as it is, depends on how many pixels per inch we want to use. 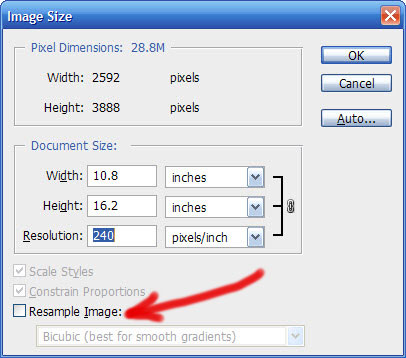 Doing so will allow us to change the size the image will be printed to (measured in inches) without affecting the basic resolution of the image as it came from the camera.

The next two screengrabs are where the ppi value was changed, and the pixel dimensions are then changed accordingly by Photoshop via resampling the image data. ie, the image is made larger or smaller. 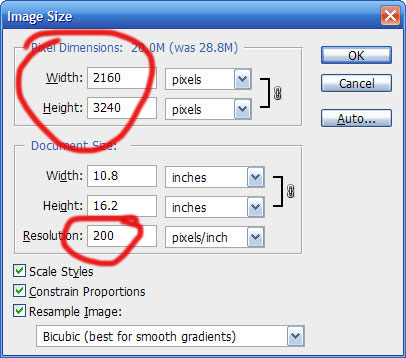 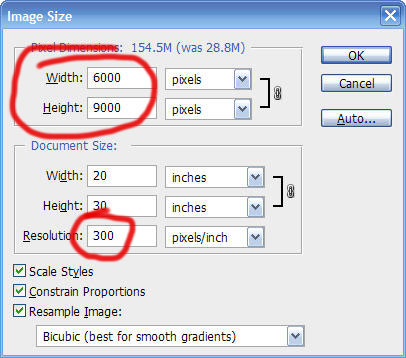 The numerical values in this screengrab should be easy to understand. If I want an image that is 20×30 inches, and I want / need the resolution to be 300 ppi, then the basic math tells us that we’d need 20×300 = 6000 pixels along the one side to have an image that size. Basic math and basic geometry with the aspect ratio.

In this instance, the ppi value makes sense … a certain ppi at a required size (in inches).
Describing the print size in this way makes sense. It is equivalent to traveling for 18 minutes at 65 mph. It is a description that contains useful info.