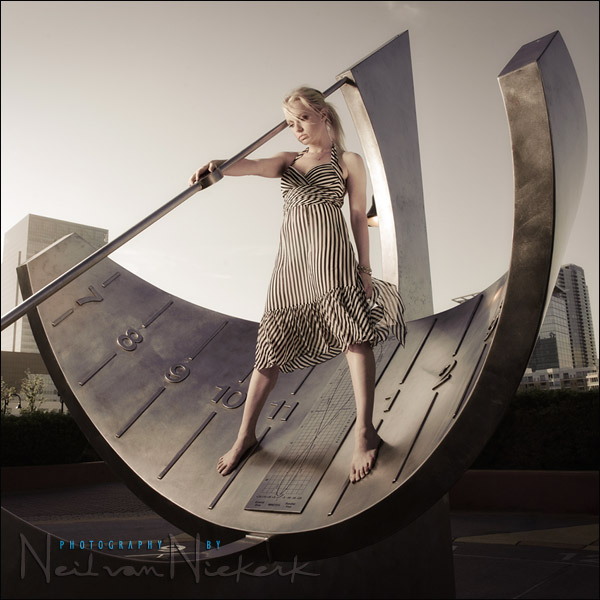 In composing an image, it isn’t just a matter of placing your subject somewhere in the frame. This is true for whether you go by the rigid restrictions of the Rule of Thirds, or whether you like a more central composition .. or a composition with a lot of negative space .. or whether composition is more in the way you instinctively react to the scene and subject in front of you.

Equally as important as where you place your subject, is what you include and what you exclude in the frame.   With photographic composition you have to look at the edges of your frame.

I really prefer getting it right in camera – composing for that 3:2 ratio.  But it isn’t always possible.  Sometimes a different crop works better .. say a square crop. With this image of our model, Catherine, standing inside this massive sundial, it made visual sense to use the shape of the sundial to dictate what the final composition should be.

(This was photo taken during the most recent workshop on flash photography
held in New Jersey and New York.)

So let’s look at what was excluded in the crop … 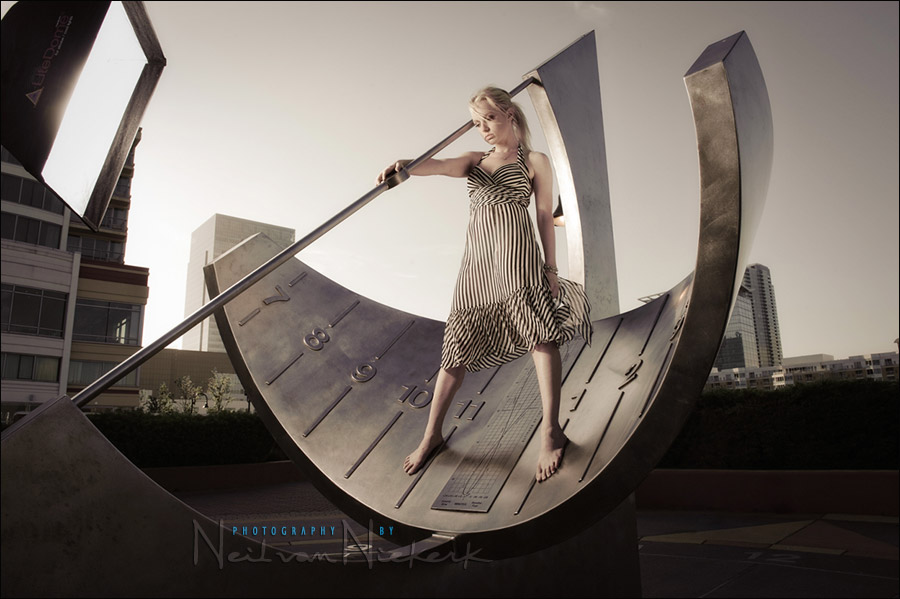 What I had to crop out was the softbox which provided the light on our model.

I had to move the softbox close enough to give me the 1/250th @ f10 @ 200 ISO that I needed for this exposure.  I still wanted a little bit of detail in the sky, and this dictated a small aperture at a low ISO … at maximum sync speed. The softbox does pull down the output of the speedlight, but it gives me light that is soft enough for my liking.

I knew I would crop out the buildings on the left anyway since they didn’t add much to the image I had in mind. So it wasn’t a problem to move the softbox within shot.

With this image, I had my flash exposure compensation (FEC), set to + 1.33 EV to compensate for the brighter tonality of the scene.  The metal reflects a lot of light, and would cause the camera to think there is more light from the flash than there actually was.  So I had to dial up my FEC.

To overcome the drop in power, I would’ve had to use a more powerful flashgun .. or use two (or more) speedlights in tandem. I could also have used bare flash.  This would’ve been powerful enough to have moved the flash back, and out of shot.  But the light would’ve looked different.

The rest of the success of the image then depended on a fantastic model … and a great architect.