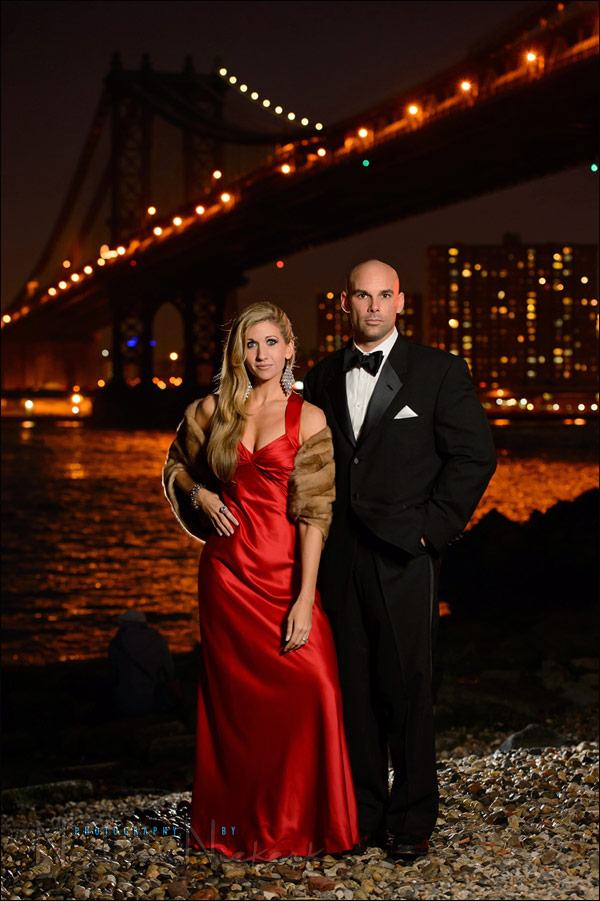 Sarah and Mark were in New York, dressed to the nines, to attend the Rockettes show. And while they were dressed up, and with some time before the show they were attending, we did a photo session. You might remember them as the couple in my book, off-camera flash. I’ve also photographed Sarah on other occasions. I thought that the New York skyline at dusk would work as a perfect backdrop to how stylish they were dressed. (I did ask Mark if he felt like James Bond, all suited up like that in his tux.)

The lighting setup was straight-forward. The main light was a speedlight in the Lastolite EZYBOX 24×24″ softbox (affiliate). The rim-light was another speedlight behind them, with the plastic diffuser cup on so that the light would spread wider. 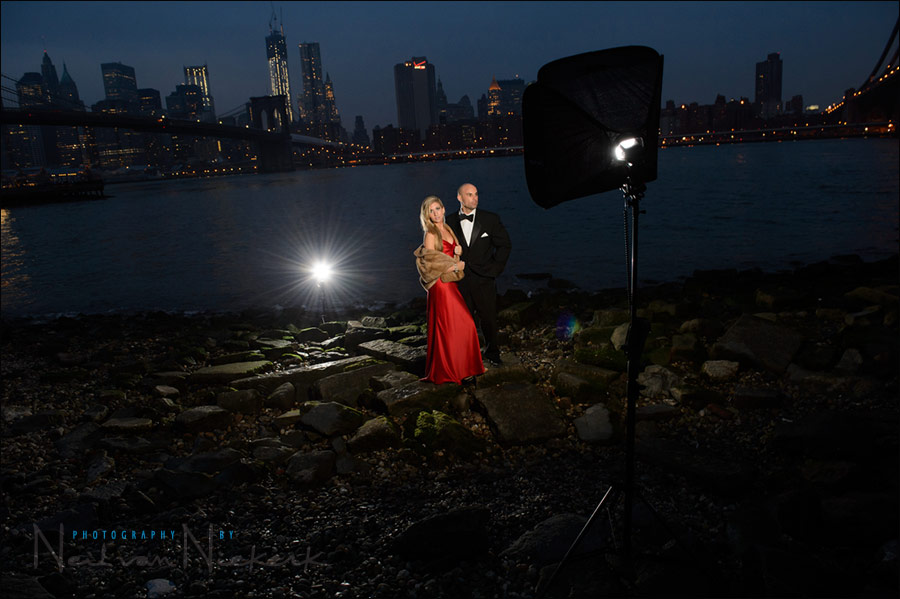 You can see from this photo that I angled the softbox upward, to force light fall-off to the bottom of the frame. I didn’t want to light up the ground. I also didn’t really need their legs and lower body to be lit up as well as their face. So this way I was able to accentuate their upper body and face.

The flashguns / speedlites were controlled manually. TTL flash would just have been hard work here. TTL flash would’ve meant constant controlling the flash exposure compensation for each shot because of the large areas of dark tones. So manual flash it had to be.

As we were shooting, the ambient light was fast fading. Therefore you’ll see the background gradually going darker. I adjusted my shutter speed a little bit. Then at some point, I opened up my settings a lot more to allow more of the city lights in. None of the flashes were gelled.

The image at the top, was shot last, with the Manhattan Bridge as the background.
This is the only image shown here which was shot with the longer zoom, Nikon 70-200mm f2.8 AF-S VR II (affiliate). All other images were shot with the Nikon 24-70mm f2.8G AF-S (affiliate). 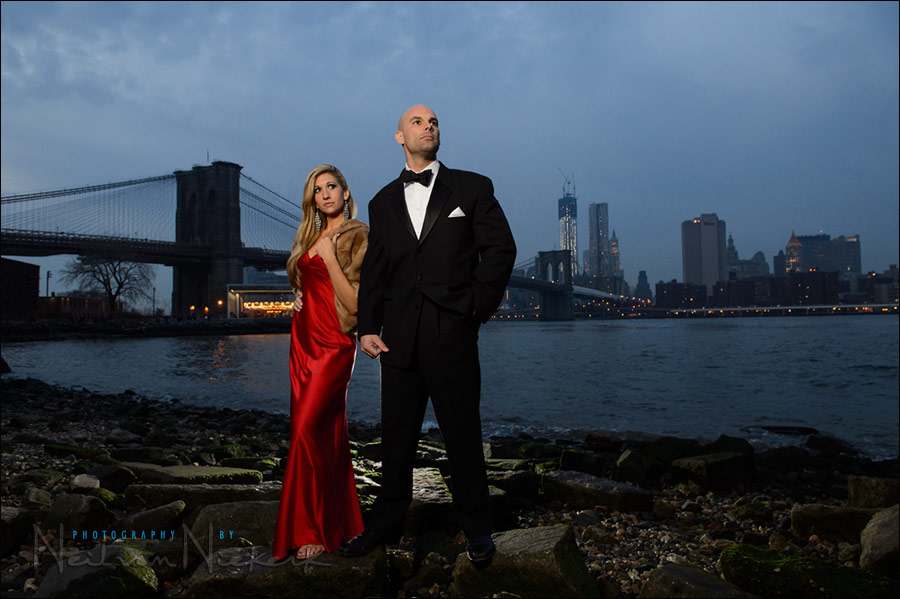 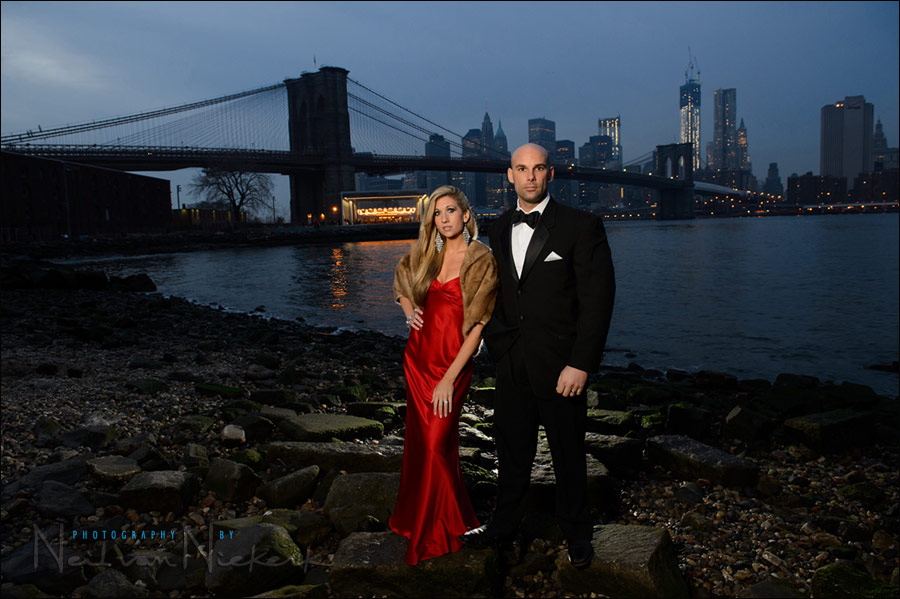 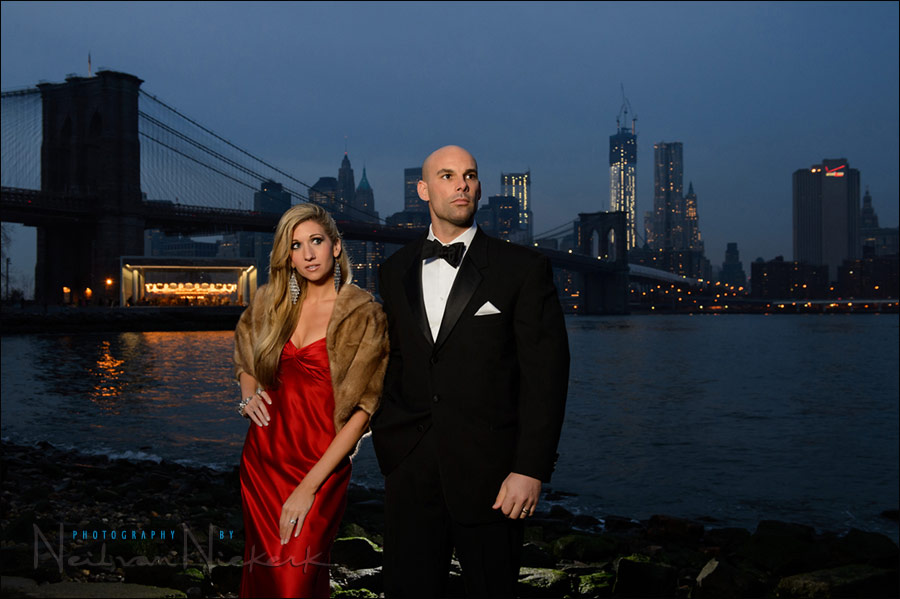 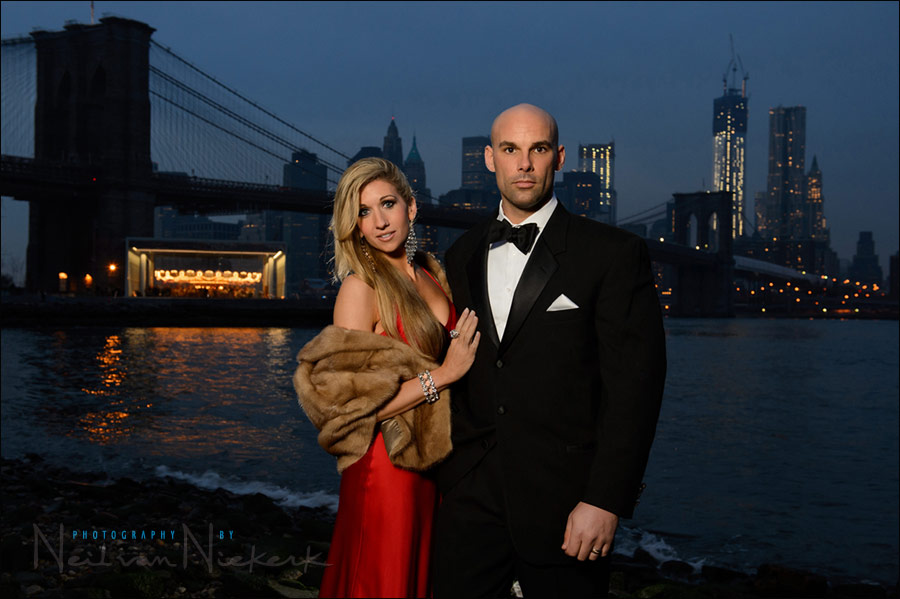 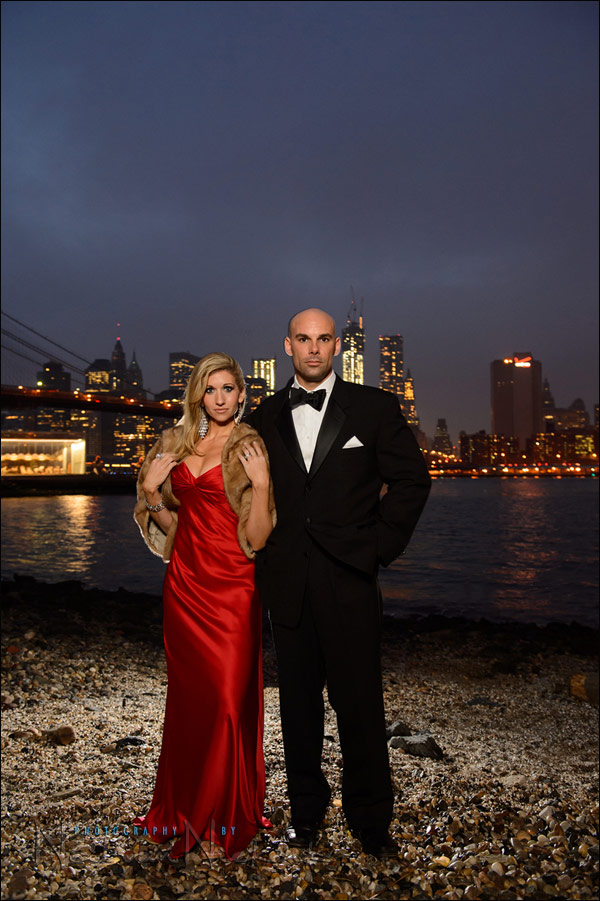 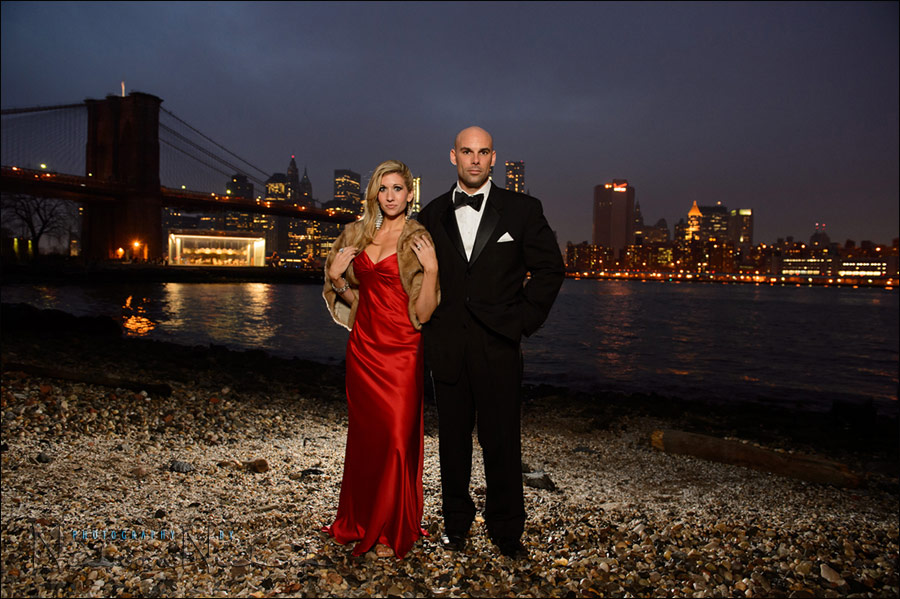 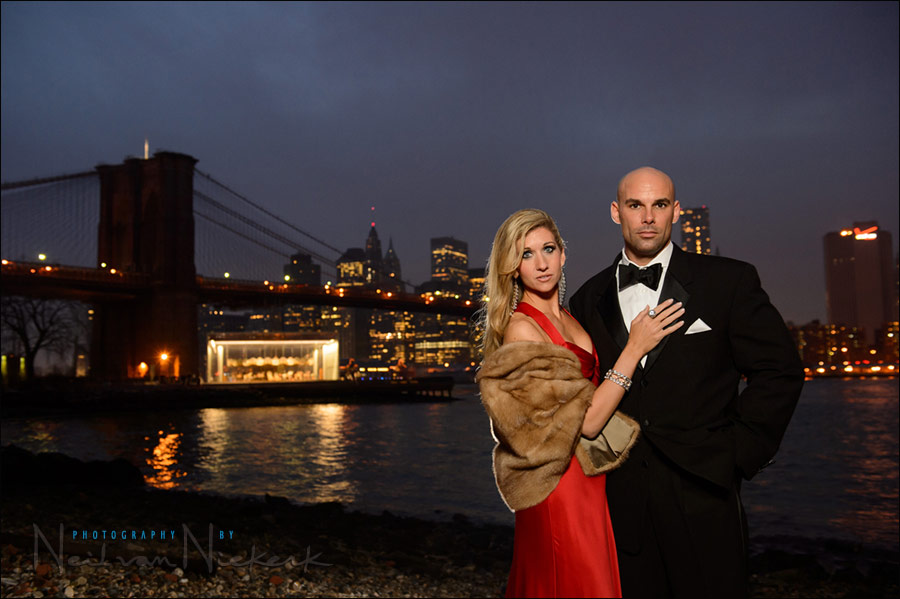 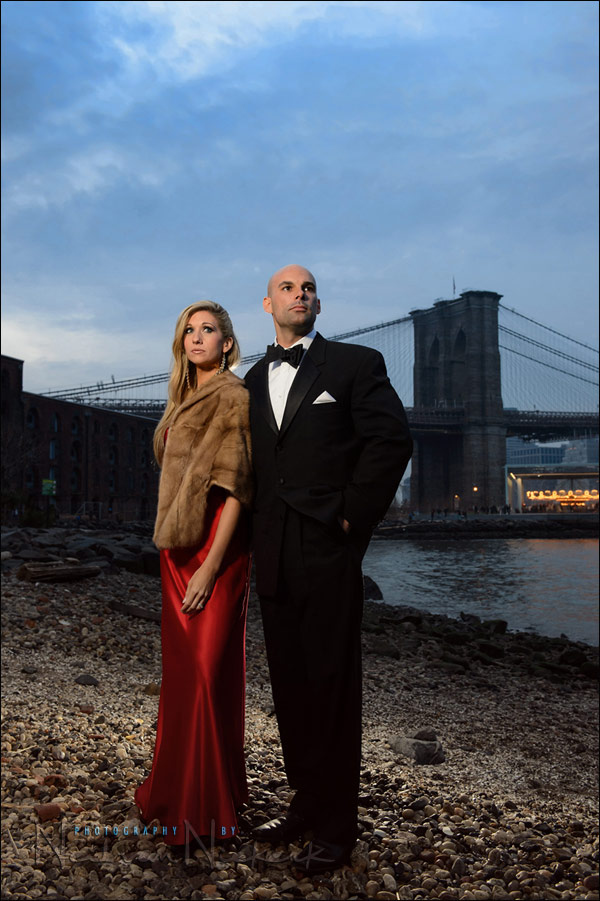 One of the very first images we shot as a test, is this one. I do like the way the pebbled shoreline of the East River showed up with the flash behind them. I worked the image a bit though.

The comparison below shows the straight JPG-from-RAW file, on the left. The right-hand photo is the image at the top as I edited it. The edited image consists of a combination of 3 versions of the photo, that I very quickly combined in Photoshop using the gradient tool. 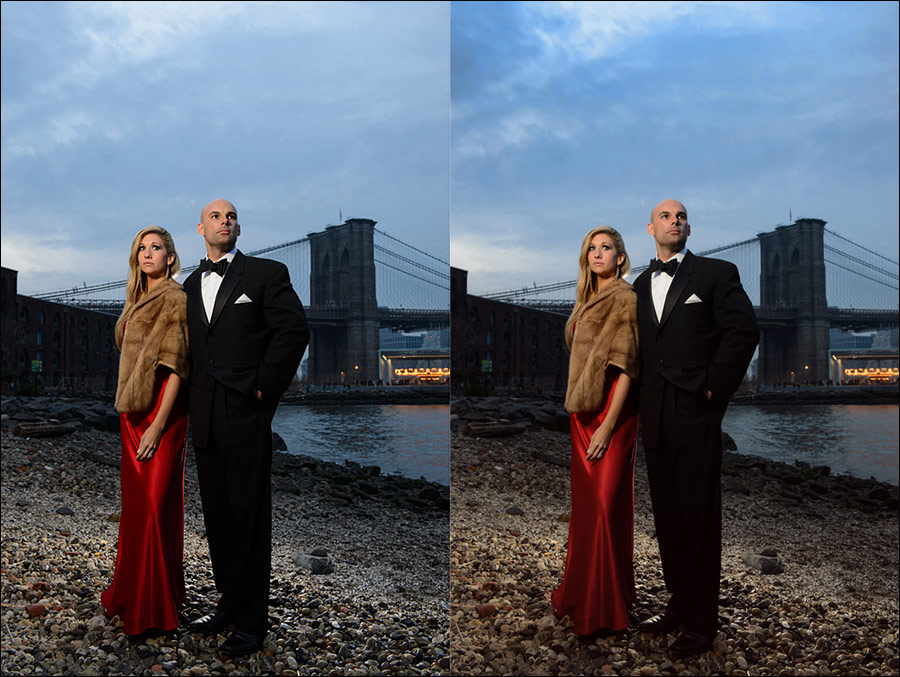 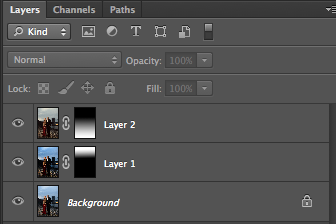