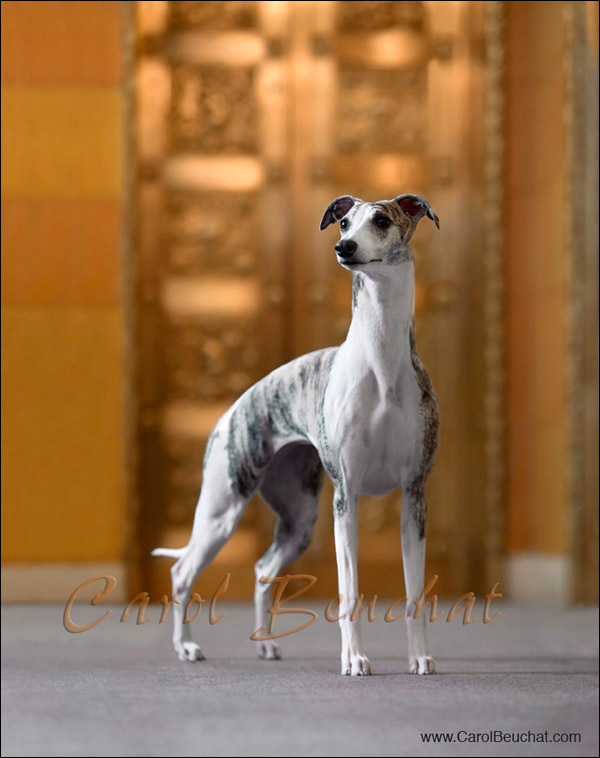 A friend of mine, Carol Beuchat, is a photographer who specializes in dog portraits and dog shows.  She was at the recent Westminster Dog Show, and needed to photograph this beautiful whippet, Chanel, for a magazine cover.  Since it was in Manhattan and it was ice cold freezing outside, we had to photograph the dog indoors.  The hotel lobby where the attendees to the dog show stayed would have to be the setting.  And would have to make a great setting.

The one foyer of the hotel had these gleaming metal elevator doors.  Carol carefully figured out the image’s background in relation to where she would let the dog’s handler hold the dog .. and positioned herself there with a long lens.  (Canon 70-200mm f2.8 IS )

Since the dog would easily become bored, we had to figure out the exact place we wanted the dog to be, and also figure out the lighting well ahead of time.  Once we were ready, the Chanel’s handler would bring her down, and position her.  A few frames … and  Carol would have the shot.

When I arrived in the hotel lobby before the shoot, Carol was already busy photographing a chair pillow in various spots in the hotel lobby.   The pillow was the stand-in for the dog while figuring out the lighting.  Doing various test shots of the pillow, we looked at the background and the lighting on the pillow (standing in for the subject).  The background had to be simple and uncluttered … and add to the image. The metal door really does help give a regal look to the final image.

I initially set up three speedlights to light up the subject.
Carol had two Canon 580EX II speedlights (B&H) there, and I had brought my Nikon SB-900 speedlights (B&H).  She could control the two Canon speedlights with a Canon ST-E2 wireless TTL controller (B&H).  I put one Nikon SB-900 in SU-4 mode, which would allow the speedlight to be optically triggered by ANY other flash such as the Canon speedlights.  I set the SB-900 in manual mode, and used it to light the background.  I used a clamp to fix it onto the one railing in the background, and used the black foamie thing to flag it from causing lens flare.

The test shots looked good, but we couldn’t get an angle giving us a clean background.  So we had to change position.

Carol found her angle along the one row of elevator doors opening up.  That single elevator door there at 90 degrees to the others, would be the background you now see in the final shot at the top. But because the dog would now be standing about 4 feet from the elevator doors, there was no room to hold the second speedlight + reflector.   So I stood on the left-hand side of the dog, about 6 – 8 feet away  .. and bounced a single speedlight into it. By angling the reflector during the test shots, we got the light to fall evenly on the subject / pillow … and enough light would reflect off the wall and elevator doors opposite me, to give fill light.  Perfect!

The light in the background was now the other Canon speedlight, also set to TTL mode.  The ST-E2 on Carol’s Canon 5D mk2, would then be able to control the ratio of light falling on the subject / pillow / dog .. and the light bounced into the ceiling in the background, lighting the background.

And there you have it .. the dog handler stepped in with the dog, and Carol very quickly got the shots she needed.

Chanel not only won Best of Breed in whippets, she won the Hound Group 1 (i.e. First Place in all Hounds).  For a dog barely 2 years old, this is huge.  So, she’s been catapulted in one show into stardom, and Carol has real hope that the cover pic of her might become her “signature” photo and will be reproduced many times in the dog press and history book.