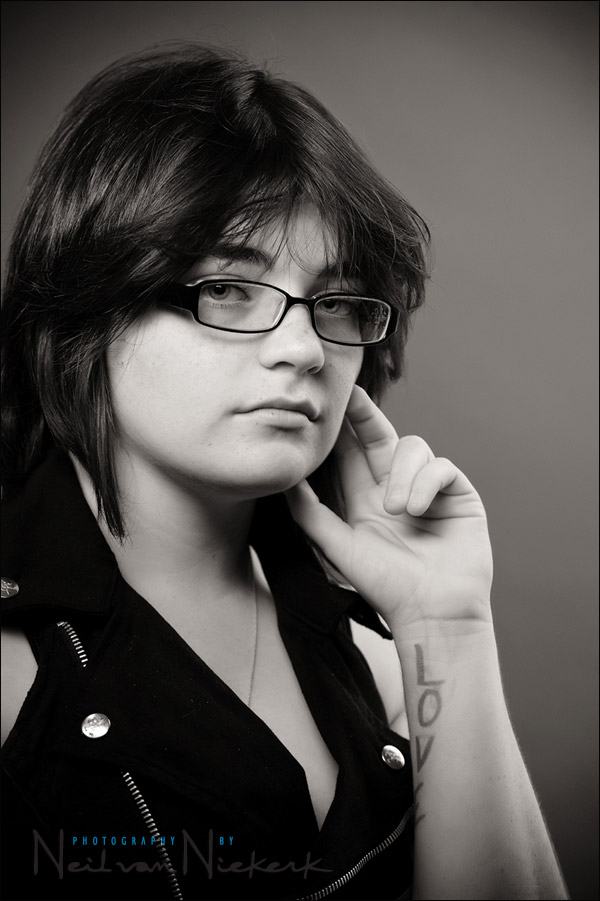 It’s been about a year since I last took a more formal portrait of my daughter Janine. Last year it was her with the steam-punk goggles, when I used a beauty dish (with a sock) as lighting. During a restaurant dinner last night I noticed Janine had ‘LOVE’ scribbled on both her forearms with a felt marker. I asked her about it, and she explained the idea behind ‘To Write Love On Her Arms‘. So I decided to include this tonight in the portrait of her.

Lighting her and the words on her arms was a slight challenge. I wanted a moody portrait, instead of just flooding it with even light from something like bounced flash …

For the sequence of photos I took of her here, I used a few speedlights. To control the light, I used a gridded softbox – exactly the same as shown in a previous article about the sequence of setting up the lighting during a shoot. In a small and simple light set-up with speedlights, there just wasn’t the control to have short lighting on her face, and somehow spot-light the writing on her arm. With a sprained wrist she couldn’t turn her right hand towards me, so we only photographed the one.

In getting the light on her and her arm, I ended up with broad lighting, and the pose was more formal than I originally intended. I wanted something more dramatic … but this is where we ended up for this photograph of her.

To give a more dramatic light fall-off to the top and bottom, I turned the gridded softbox sideways. See the pull-back shot below. 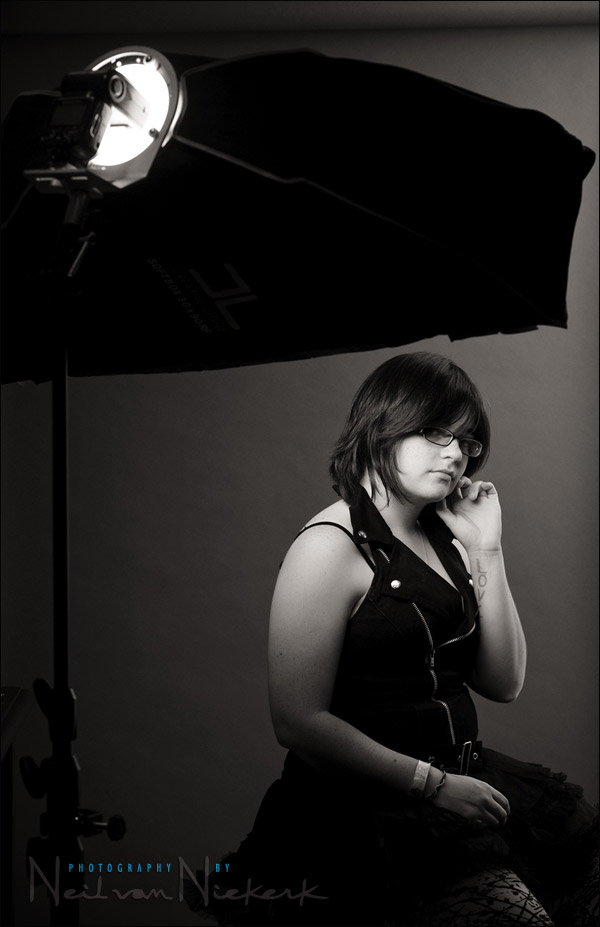 The grey backdrop was lit up by another speedlight bouncing flash into the passage to the right of the backdrop. I used an on-camera speedlight as Master (with its own output disabled), which controlled the gridded softbox (Group A), and the light on the background (Group B). Both Slaved speedlights were in manual output. The light reflected back onto the backdrop gave the slight gradient of light you can see there on the background. That same reflected light spilled onto her face, giving a bit of a welcome accent light. More accident light perhaps, since it wasn’t necessarily by design.

The expression? Not boredom as you might suspect, but annoyance because I dared brush her hair out of her eyes for the photographs. Not everything is under our control as photographers. ; )

Here is what the gridded softbox looks like that were used: 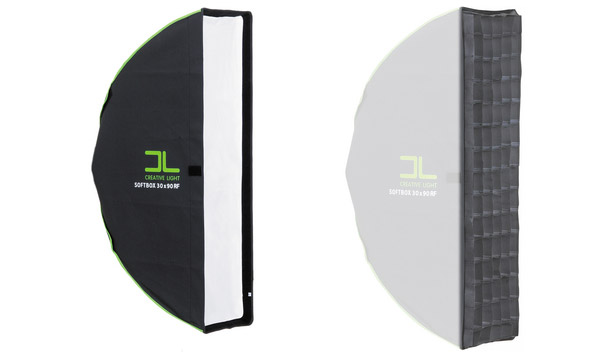 You get different types of grids – ‘eggcrate’ and ‘honeycomb’.  The actual construction and look of the grid will tell you which name is applicable. The Softgrid shown above is of the eggcrate type. A search on B&H’s website will show you numerous options and possibilities.