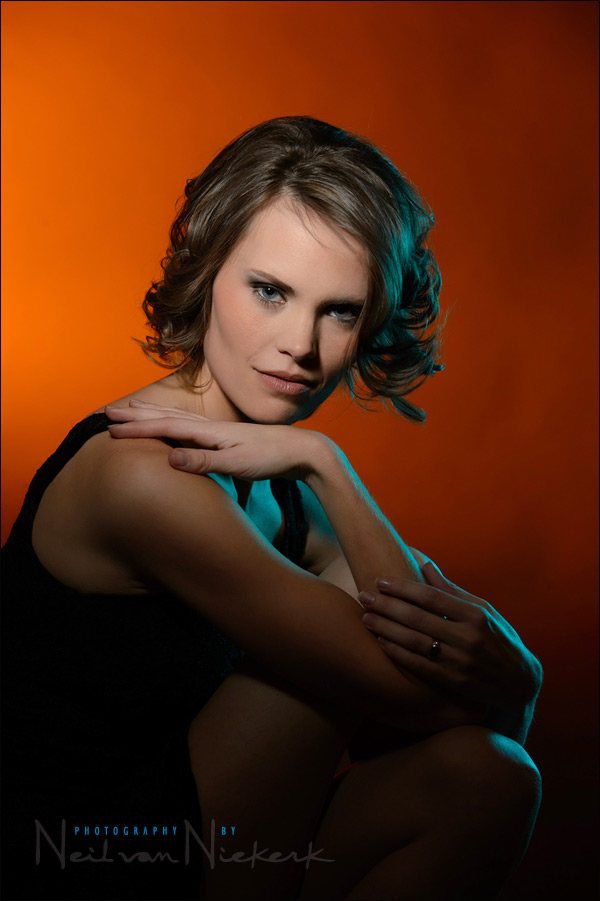 I met Jessica Joy during a photo shoot-out in Las Vegas last year when a group of photographers and models met up. She was there as both a photographer and a model. We had discussed doing a proper photo session some time in the future … and then Jessica got news that her husband will be stationed abroad in a few months from now. So we decided that *now* was the time to do this.

With winter-time in New Jersey and New York just too cold to comfortably do a photo shoot outdoors, we settled on doing it as a studio shoot.

I bought two sets of the Honl gels for speedlights a long while back, to try out sometime, but they remained unused in a drawer. I had the two sets of colored gels – the Honl Photo Filter Kit – Hollywood (affiliate); and the Honl Photo Filter Kit – Autumn (affiliate). What made me curious about them originally, was that they were inexpensive, but seemed like a good option in juicing up flash photos a bit.

The first test image with the lights set up like I wanted, looked good … but a little drab. First I added a gel to a gridded softbox to the left of her (with the blue-green tone), and then I added a filter to the flash on the background … and  I was hooked! 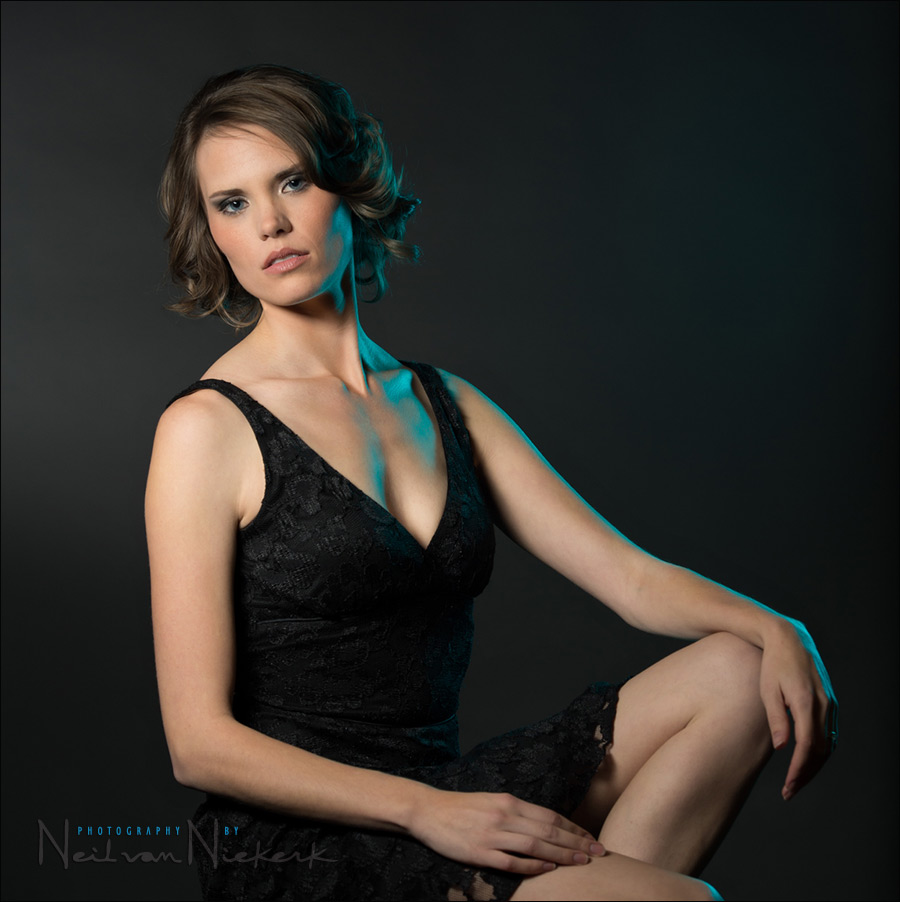 One of the initial photos, done as a test. The blue-green gel helped add a splash of color to the near monochrome image. And then I added a warm gel to the flash on the backdrop .. and the image sprang to life. 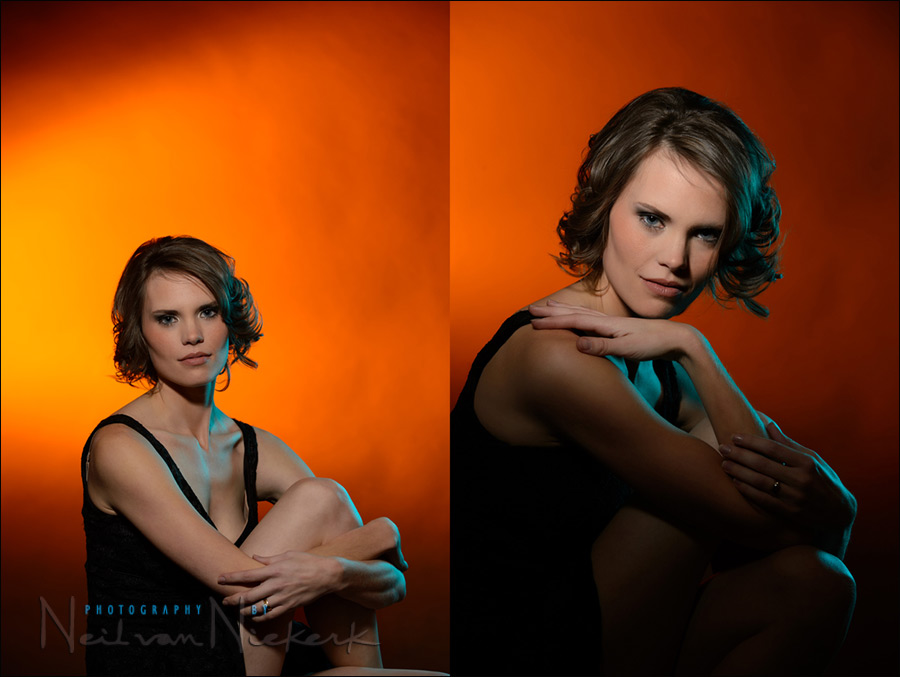 On the left is the very first test image with the warm background. On the right, the final image as shown at the top.

Here is the pull-back shot to show the lighting setup: 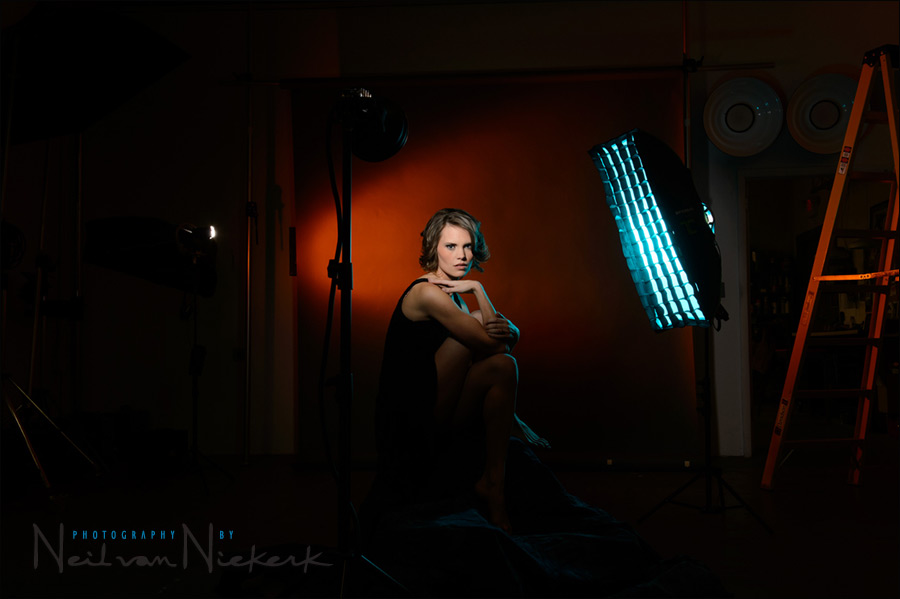 The surrounding areas are very dark in comparison to the lit areas, so the placements of the lights isn’t too clear. So here is a version of the same image, with local adjustments to lighten up the darker areas. (Excuse the uneven brushing in of details in the shadowed areas.) 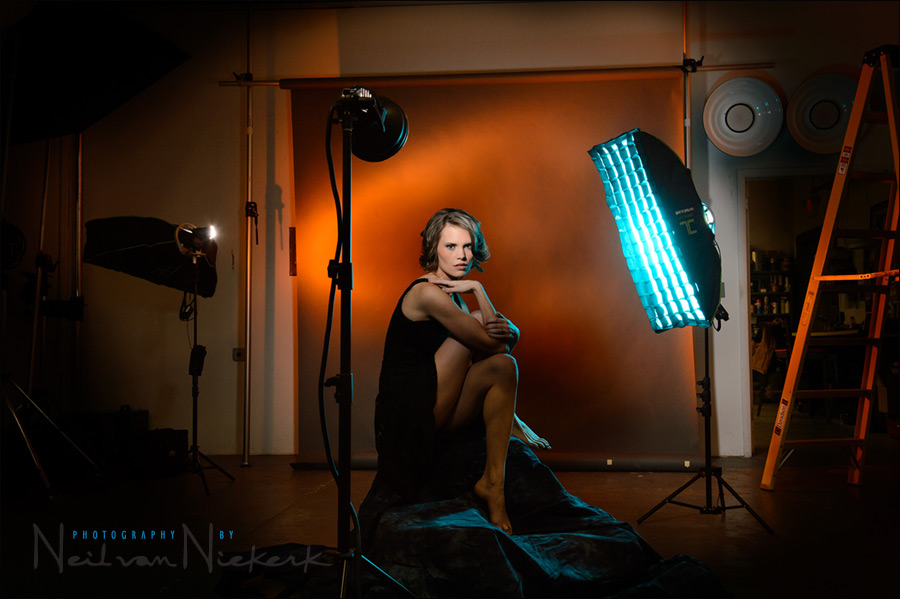 The main light is a Profoto head with a 7″ reflector and 10 degree grid on it. Using it fairly close to her, the light was hard, but not unflattering. Similar to a video light in a way. The grid is there to control the spill of light, so that there is a dramatic fall-off to the edges, and Jessica’s arms and the rest of her body are shrouded in shade.

The flash-head is a Profoto 600R initially, but I later changed it out for a Profoto D1 500 Ws head.

The rim light is via the gelled speedlight in the gridded softbox to the right of our model. The grid really does wonders in controlling the spill of the light.

Background light: On the left-hand side, you can see the bare speed light that is gelled with the warm color. The background itself is a grey paper roll backdrop. Splashing a colored gel onto it gave it that tone. The speedlight is on a lightstand, and was hooked up to another gridded softbox, but I swiveled the head around, so that it is just the bare speedlight on the background.

I metered for the main light, but the others lights were adjusted to taste by looking at the camera’s preview.

The final result with the gels impressed me. Even more so in that they were easy to use and added a lot of glitz to the final image. And they are inexpensive. The gels were attached to the flash with a Honl Speed-strap (affiliate) on each speedlight.