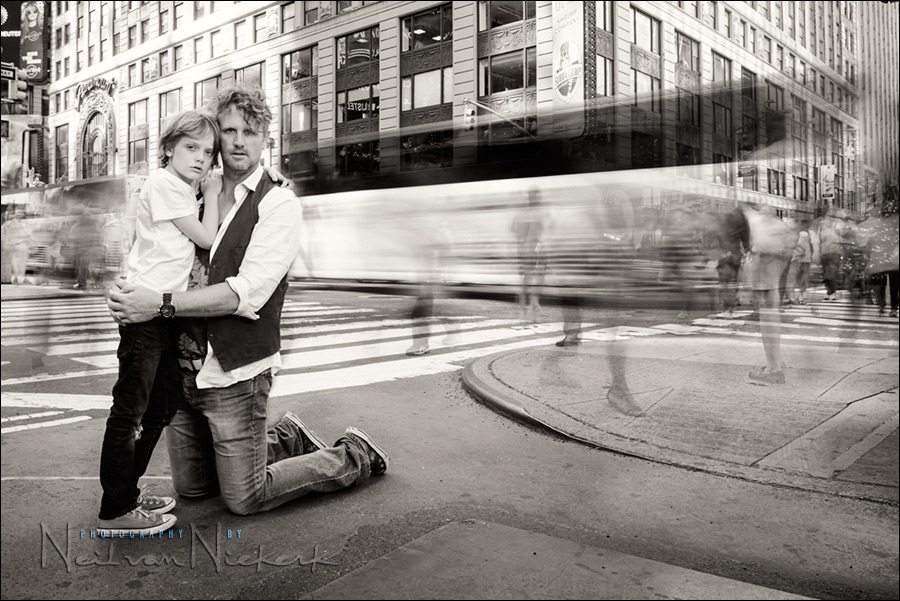 My friend, Chuck Arlund, visited New York with his son Lachlan, for a few days. At the end of the trip, I had a short opportunity to photograph them. Since this is Chuck, whom I greatly admire, and his son (who is so used to a camera by now), I wanted to come up with something outside of the usual guaranteed way of working with a longer lens, and a simpler background. I wanted something a little out of the ordinary.

What I envisioned was some place in New York that was very busy, and then go to a slow shutter speed, and let everyone that is moving around them, turn into ghostly figures. The idea I had in mind, was with the two of them central in the image, and figures flowing around them on either side. I wanted that symmetry.

But as usually happens, real life limitations and opportunities kick in, and you end up with something slightly different than originally envisioned.

The merits of a photograph

Unless mentioning the person or place or event provides necessary context, a photograph created for artistic intent, should stand on its own. Impact should not have to be explained. Neither should excuses be made for lack of impact.

Yet, there are limitations that you need to deal with while taking a photograph, that the viewer should not have to know specifically. The photograph should have impact. Regardless.

How does all this relate to the photo at the top? I was unsure about its impact and asked for opinions on Facebook. Interesting. Aside from a few informing me how I could control my depth-of-field, the response was very good. A lot of questions and comments came up, and this might make for a good point of discussion here.

The idea and the set-up

As mentioned, the original idea I had in mind was a wide shot, with a sweeping view of a street scene, with movement all around them, while they are still. In that sense, they would be isolated amongst all the movement. I wanted to do this all in-camera, and still add flash on them to light them perfectly.

Times Square immediately came to mind as a place where there’d be a horde of people milling around, but which would offer wide enough place to shoot this. Yet the direction we could shoot in was limited by the pedestrian flow, barriers, as well as policemen that asked me to hurry up. So the pressure is on to make the idea work, here, and now.

Yup, the light levels there in-between the buildings on a cloudy day was quite low.

To add enough light on them at f/22, I also brought the powerful Profoto Acute B2 600 Ws powerpack (affiliate) and a Profoto beauty dish  with a 22″ sock (affiliate). Now of course, my choice would be the Profoto B1 flash (500 Ws)  (affiliate), which would be easier to set up and use.

Now it was a matter of balancing all this – flash and daylight (at a slow shutter speed).

So how to drop the shutter speed to sloooow levels on a bright day while retaining a wide-ish aperture? A Neutral Density filter. We’ll leave that for the homework bit at the end. (I ended up not using an ND filter here for shallower depth-of-field.)

I had to shoot at an angle here to get a clear view of the street, without barricades in the way. It was also a busy intersection, so it was more likely people would be moving along. What happened though, was that people in the distance, would appear sharper, because their movements would be “smaller” from my camera’s perspective.

Some people would move too slow or would linger, and appear too sharp. In the end, the photo at the top was a composite of 5 photos, as I made the background more simple. 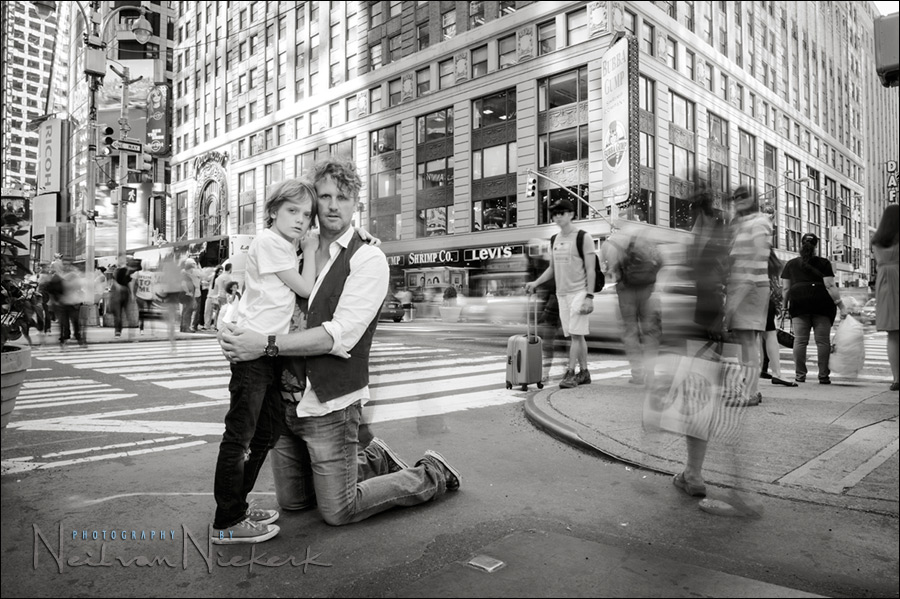 This complete frame of the image, shows that the people on the left (and people standing still), are too clear. So I cropped the image to remove the smaller figures on the left. I also combined 5 photos in total for the background. The bus streaking past hid the lettering on the buildings. Without the lettering there, pulling your eye away, the image is simplified.

In the breakdown of the behind-the-scenes decision, some of the mystery is perhaps inevitably lost. I guess that is why magicians don’t reveal the secrets. In the end, I hope that this photograph of a dad and his son would be evocative, and slightly mysterious … a tender emotional bond,  an island in the craziness of the world. A permanence.

I hope it will draw the viewer in for a while, with this stillness juxtaposed with the motion.