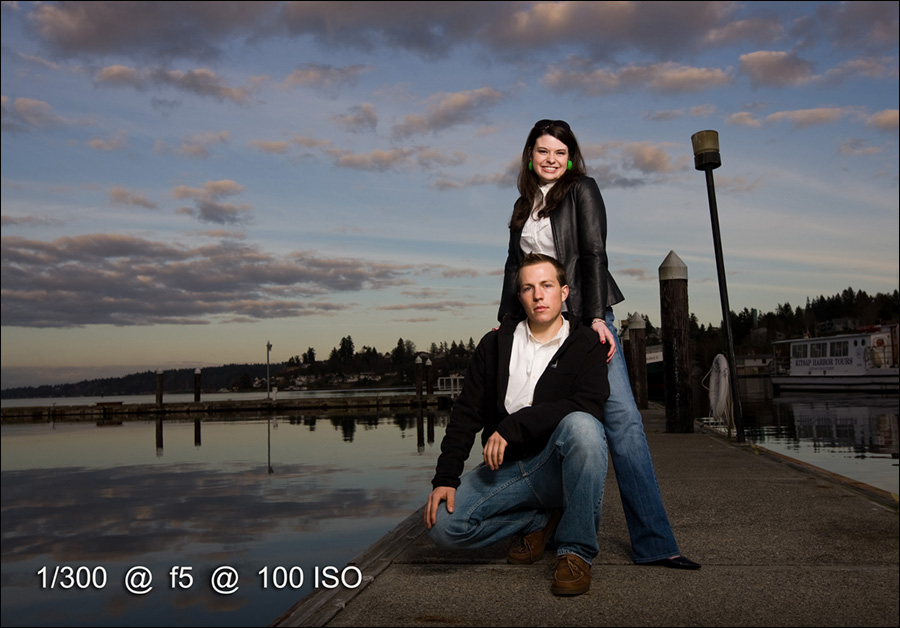 off-camera flash photography: what are your camera settings?

What are your settings? –  a question that I am often asked about various images.
Sometimes, the answer is surprising  –  it doesn’t really matter.
Sometimes the specific settings are of importance, but usually much less so than the method of getting to correct exposure of the ambient light and the flash.

This is the photographic equivalent of teaching someone to fish, versus just slapping a fish down on a dinner plate.  Just telling my settings will reveal very little about the how.  And yet, the how is far more important than just a listing of seemingly random figures.

Let’s look at this recent image from one of my workshops on flash photography – especially since it is exactly the kind of thing which I teach during the course of the day.

In this instance, I used manual flash – a speedlight in a softbox. Since the flash was manual flash, there were then 4 factors controlling the flash exposure.  This topic was covered in this recent post: manual flash vs TTL flash.

Now, those 4 factors that control  our manual flash exposure are:

.
invariably we start with the ambient exposure first

The sky was still fairly bright, therefore 100 ISO made most sense.
The actual ISO could’ve been higher, if I needed more depth of field.
Since ISO affects both ambient and flash exposure, any ISO would’ve been okay as long as we didn’t run out of apertures.

Whenever we shoot a subject in shade against a bright background, we get most efficiency from our flash at max sync speed.  For many cameras this is 1/250th.  Check for your specific camera.

Now an appropriate aperture was chosen to expose correctly for the sky.  Or we could, as in this case, create a dramatic sky by underexposing slightly.  We’ve now established correct ambient exposure.

And then the softbox was held close enough – or far enough – for proper flash exposure. (ie, we controlled the distance between flash and subject.)

For that image, there were two speedlights, each with a softbox, that were triggered simultaneously – and pointing at each model.  But the same thought process holds as in the explanation.

about the decision to go to maximum sync speed

As mentioned in the tutorial on maximum flash sync speed, shutter speed is the independent control for the ambient light exposuret, and has no effect (directly) on flash exposure. (This is true while we don’t go into high-speed flash sync.)

When you work in bright conditions, the maximum flash sync speed is hugely important.

Think about it this way:
You want more range on your flashgun, since you rarely want to work riiiight up close to your subject. Or at least, not be forced to work right up close.

So you need more distance / range on your flash.  This implies that you need a wider aperture.

Since your ambient light is constant, you have a whole range of shutter speed / aperture combination’s to work at.

Let’s look at an example of bright sunlight outside. The Sunny 16 rule implies that in bright sunlight, our exposure for the ambient light is around:  1/100 @ f/16 @ 100 ISO.

This can be translated to the same ambient exposure:

But then you hit the ceiling at max sync speed … over that, you go into high-speed sync mode, and your flash’s output drops considerably.

So you have a sweet spot at max sync speed.

This is crucial in understanding how to balance flash with daylight.

It becomes an easy shortcut then:

Bright conditions? yup .. immediately go to max sync speed.
You might as well then go to 100 ISO.  (Or 200 ISO on some Nikon D-SLRs.)
Find your aperture for correct ambient exposure for these other two settings.
Now find your correct (manual) flash exposure.

You’re done.  And it was easy because you immediately went to max flash sync speed. Simple. These are fundamentals of lighting techniques. You can’t escape them.

getting to the specific camera settings used here

We start with the ambient exposure.
Broadly speaking, we have three areas here of similar brightness:
– the sky
– the reflection of the sky
– the jetty (which is much darker)

It makes most sense here to expose for the sky. Holding the camera up, you can take a meter reading and a test shot to get to the best exposure. As explained, it makes most sense to stay at maximum flash sync speed for starters, when we use flash with bright light.

Now, at max flash sync speed, we find our other two settings – aperture & ISO. If we couldn’t get to values for aperture and ISO that made sense for us, we could always change the shutter speed. But max sync speed would be a solid starting point here.

With that, we now have three settings – shutter speed, aperture & ISO.

Since we are using manual flash, we still need to find two other settings:  distance & power.

The distance is whatever is the closest we can have the light sources / softboxes, without interfering with our composition. All that is left then to figure out is the power of the flash.

In this way, most often when we work on location with off-camera flash, our settings fall into place one after the other. Instead of feeling overwhelmed with “where do I even start!?”, you can systematically work this out so that every camera setting is a good choice.