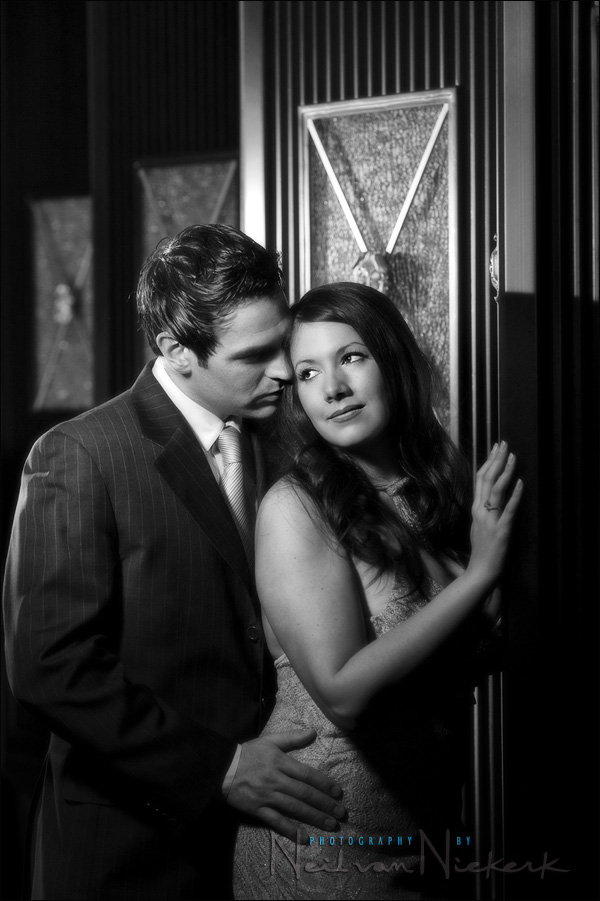 With this portrait of my friends Natalie and Chris, I wanted to portray something dramatic, reminiscent of the old Hollywood Style Glamor portraits. While the classic Hollywood portraits, as done by the masters were lit with Fresnel spotlights (which are continuous lights), I wanted to create some of that mood with a few speedlights …

I photographed Natalie and Chris as part of the video clip for PocketWizards … of which I’ve already shown the photo-session with a model, Shawna. By the way, Natalie is a photographer in Staten Island, NY.

Fresnel lights have a distinct look – it’s a spotlight that gives a hard shadow, but with the focus-able Fresnel lens, there is a softness to it. Different than a hard speedlight, and different than a flash with a softbox.

For this portrait, I didn’t want the even lighting that a medium sized softbox would give. I wanted a hot-spot towards the top part of their bodies, with distinct light fall-off to the bottom. I wanted the light to have the dramatic quality that we see when using a video light for photography.

To approximate this, I used the small Lastolite 8.6″ Ezybox (B&H). I had it on a lightstand, and placed it fairly close to Natalie and Chris. Most importantly though, I feathered the softbox upwards, and away from Natalie so that only the edge of the light from the softbox caught her face.

Quality of the light

I do have a distinct preference for soft lighting. However, if you look at the way the old Hollywood masters such as George Hurrell, CS Bull and Laszlo Willinger lit the classic portraits of the movie stars, there are distinct shadows. They had a dramatic way of lighting their portraits, with specific use of light and shade.

I strongly recommend this book where the authors analyze and break down some of the best known portraits and describe how the images where lit – Hollywood Portraits, by Roger Hicks and Christopher Nisperos

It is available on Amazon, along with other titles on the topic. If you delve in that way of lighting, you’ll see that the the style is intentionally dramatic and glamorous. This is what I had in mind with this photograph.

In this case, I had the small softbox to my left as well, but feathered upwards and more to the left, away from Natalie and Chris. It was set to manual, and triggered with a PocketWizard FlexTT5.

The rim-light on Chris is via a direct speedlight. From the direction of light you would accurately assume it wasn’t behind Chris, but off to the side. This gives the highlights in his hair and the rim light on his clothes, separating him from the darker background. This speedlight was also controlled with a FlexTT5, and was set to manual output. This speedlight was on a lightstand.

To keep the background – the dark wooden panelling – from falling completely into blackness, I lifted it with a speedlight shining directly on it. This speedlight, also controlled with a FlexTT5 unit, was also set to Manual output. I had it zoomed to 28mm, and turned away from Chris’ back, towards the wooden panelling. This speedlight lay on a chair that I had pulled closer, since I had only brought 2 light-stands with me.

Because it was so dark in this lounge area, I used a Nikon SB-900 as a Master on top of the FlexTT5 mounted on the camera. This gave me the AF-assist from the SB-900, which is lacking on the AC3 ZoneController.

That’s it in a nutshell.

The key here for me in the success of the image, is feathering the small softbox. This gave me the light fall-off I wanted to accentuate Natalie’s features.