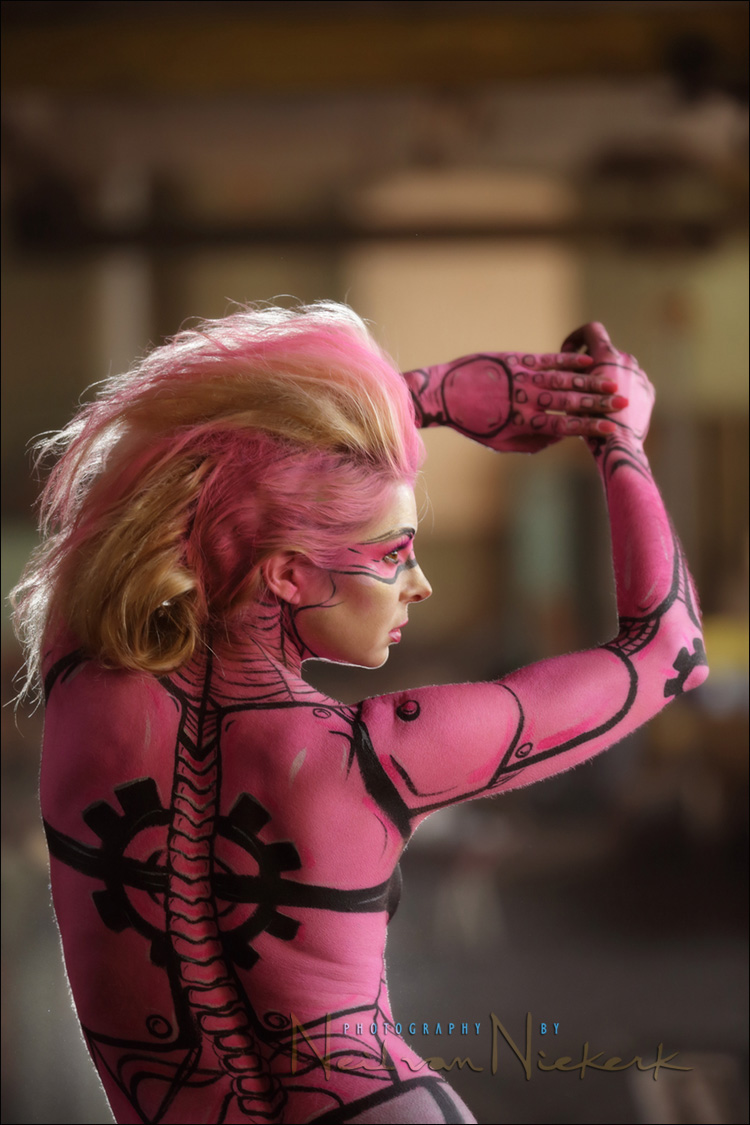 Summary: Right off the bat, let me say it – this speedlite, the Canon 600EX-RT (B&H / Amazon), is going to change the industry. Nothing is going to be the same again.

A speedlite that has radio transmitters built in, has been anticipated for quite some time now. It just makes sense.  So it was just a matter of time before one of the big camera manufacturers did this … and Canon is the first. And they didn’t drop the ball on the rest of the speedlite’s features, or with the functionality of this piece of gear. It’s easy to use, with an obvious menu – even for a complex flashgun like this. 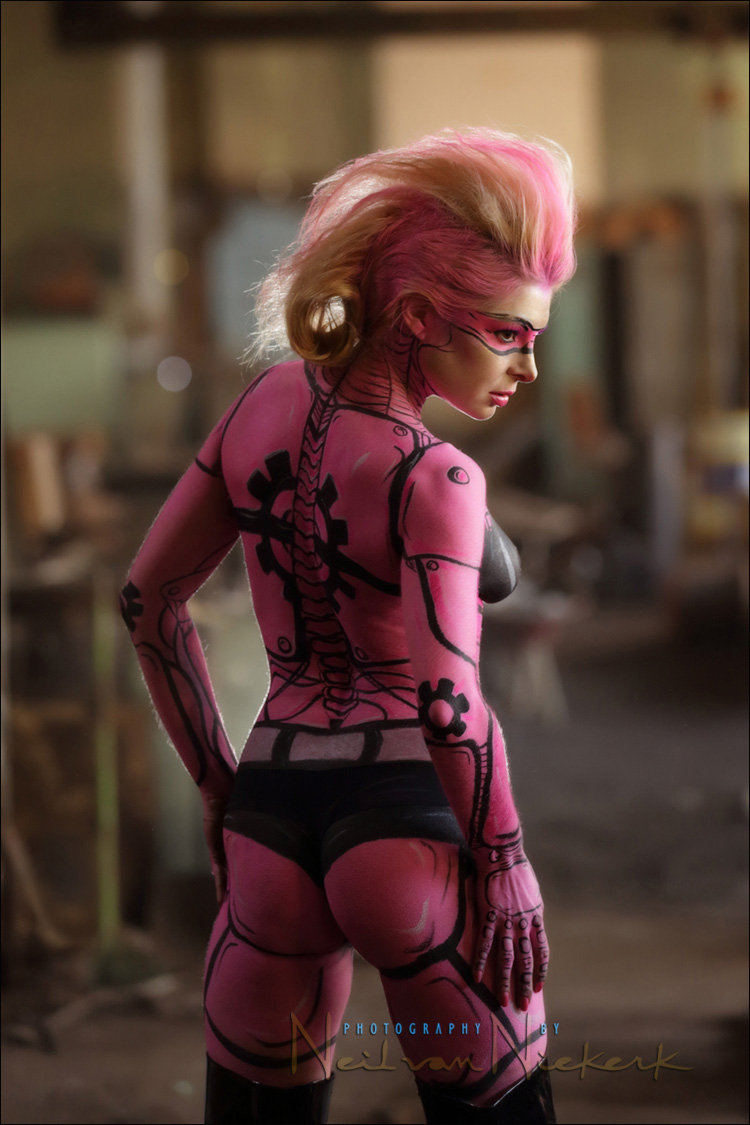 I attended another of the shoot-outs arranged by the Hudson Valley Click group. (I’ve used images from their past shoot-outs in various articles here.) This weekend the theme was a Retro-Futuristic CyberPunk, and I had the pleasure of photographing Karyn. And as you can see, her outfit was in fact full-body paint, courtesy by Kelly Torres of NY Body Art.

We were shooting at a disused foundry, which turned out to be a great setting for the theme. I chose to isolate Karyn with a longer focal length, in the one open factory area. There was enough distance to have the background completely melt away.

The majority of the light on Karyn was from the late afternoon light streaming through the windows. I purposely posed her into the light … and then used a Canon 600EX-RT (affiliate) for that rim-light around her and to create a subtle hot-spot behind her. This really helped etch her outline against the out-of-focus background. With the dust in the area, it gave that slight halo effect around her body.

Here’s the pull-back shot where you can see the windows, and where the speedlite was positioned on a breeze-block. 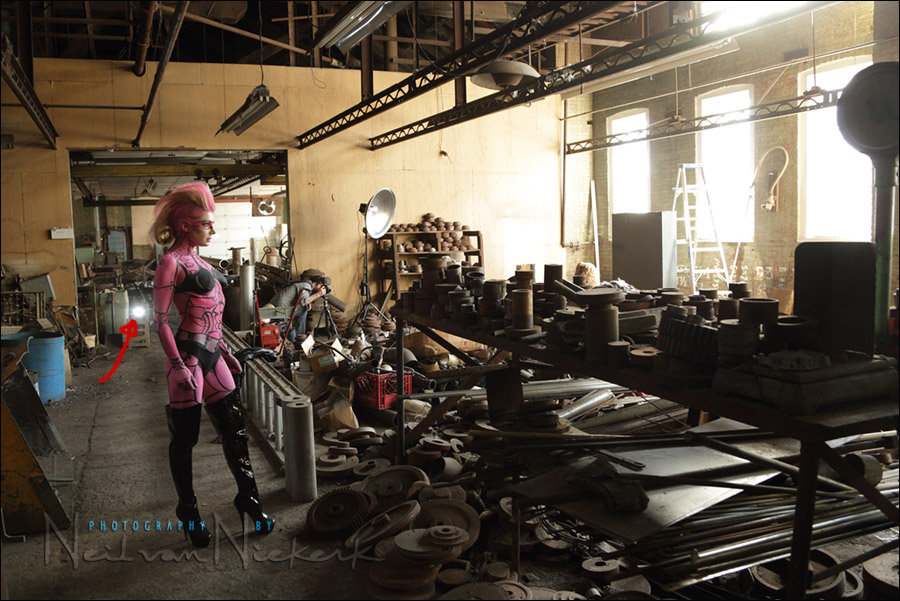 The speedlite was controlled by an on-camera 600EX-RT as the Master.  I had the Master flash’s output disabled so it doesn’t add any light. I just wanted to fire the flash in the distance behind her.

This is the kind of set-up where just using the built-in optical wireless system of a flash like the Canon 580EX II, would’ve been a limitation. It might be just out sight there. Which meant, I would’ve had to use radio transmitters of some kind. This always implies more cables, connectors, cradles, batteries, settings. It’s complicated. With just two Canon 600EX-RT Speedlites (affiliate), I have the same kind of control … but it is much easier to set up and control.

I didn’t have an Canon ST-E3 Speedlite Transmitter (affiliate) yet to try out, so I used the on-camera speedlite as Master. I’m a little ambivalent about the separate Speedlite controllers like the Canon ST-E2 or Nikon SU-800. It just seems like you’re half-way to buying a speedlite anyway. Besides, you could always use another back-up speedlite. 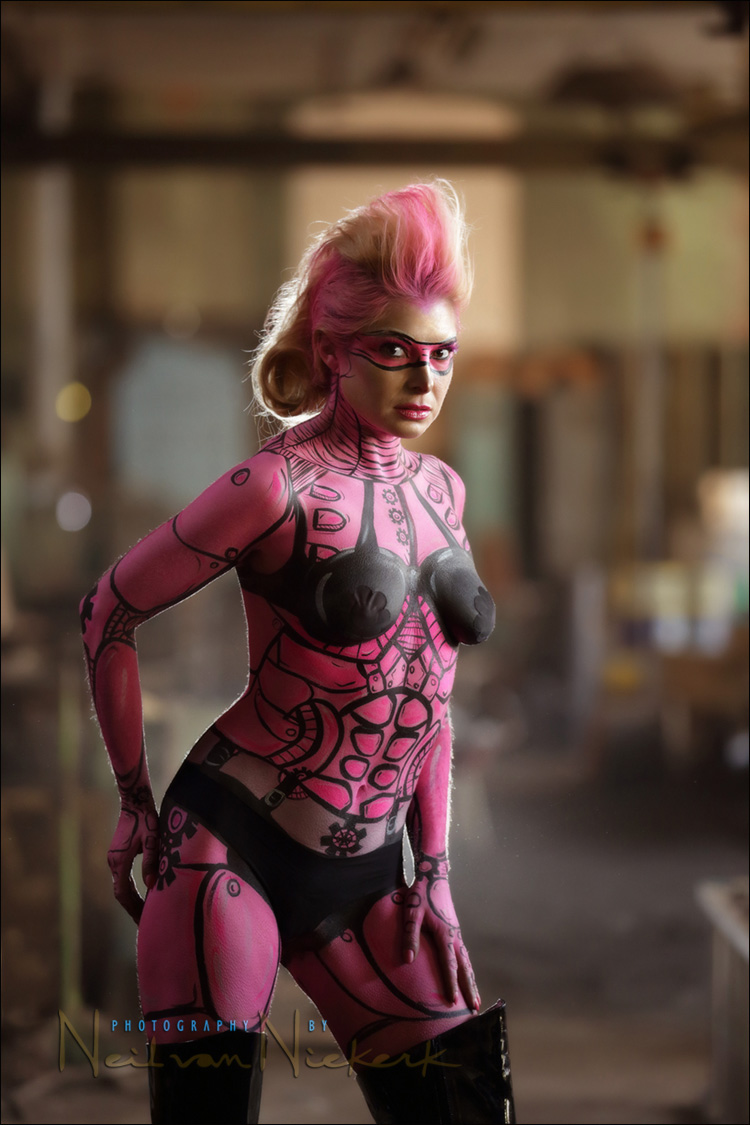 I used the speedlites in a basic way here, just so I could enhance the available light.

An overview of Nikon and Canon speedlites

When I moved from the Nikon system to the Canon system several years ago – Nikon D2x to Canon 1D Mark IIN – the one thing that truly revolutionized my photography, was that the Canon 580EX Speedlite could rotate 180 degrees to either side. The Nikon SB-800 was limited to 90 degrees in the one direction. That extra90 degrees had a huge impact. I could now be specific about the direction of my light when I used on-camera bounce flash. As I said .. this was huge!

Then Nikon updated the SB-800 to the phenomenal Nikon SB-900 which brought in a lot of extra features, but most importantly, allowed the flash-head to rotate 180 degrees to either side.

Then Canon updated their flash to the Canon 580EX II, and honestly, it felt like a step backwards. The 580EX was so easy to switch from Master to Slave, and back to normal. With the 580EX II though, it felt like I had to relearn how to do this if I didn’t use the flash like this for a few weeks. It was obscure.

Equally obscure was the menu system of the 580EX II. Well, the 580EX was also obscure with the various custom functions which you needed the manual or a cheat sheet to know what they affected. The SB-900 on the other hand, was dead easy to set up with beautifully clear and obvious menu system.

So with the Nikon SB-900 and Nikon SB-910 Speedlight (affiliate), it really felt like Nikon was steps ahead of Canon in terms of the ease of use of their speedlights. Definitely in how Nikon allows you to control the individual Slave flashes in discrete levels, made more sense.

But the one area where both systems were hampered, is that their built-in optical wireless systems were limited by line-of-sight constraints. Bright sunlight also affected how well they worked. So you had to resort to various wireless radio triggers to get past these constraints.  Until this bold step by Canon!

Better yet, the Canon 600EX-RT Speedlite (affiliate) has an obvious menu system with obvious controls. This is important! 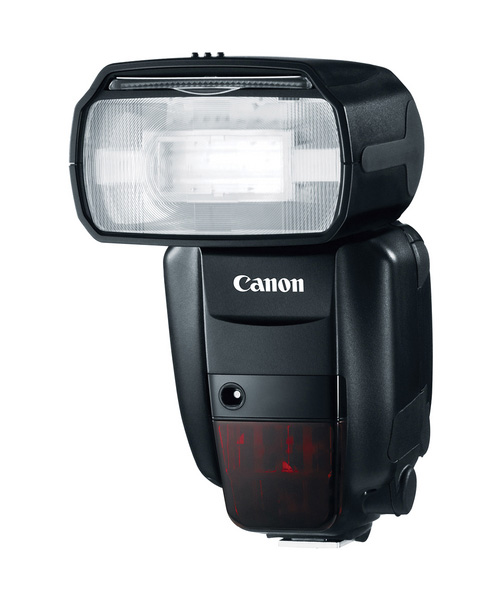 1. Ease of use.
As mentioned earlier, the previous Canon speedlites where a pain when you had to change custom settings, and had to refer to the manual or cheat sheets. The Canon 600EX-RT changes all that with a clear menu systems, and clearly marked controls. Surprisingly, for such a complex machine, the speedlight is easy to understand if you have some knowledge of the previous Canon speedlights.  I was able to set the two speedlites to Master / Slave modes, and be sure that they were linked, without reading the manual. I like that. Basic functions need to be obvious.

Also good is that the Canon 600EX-RT works with the older optical wireless controlled speedlites like the 580EX / 580EX II. However, you can’t have it work with both the radio and optical modes simultaneously.

3. High-Speed Sync
On p.51 of the manual it states that for cameras prior to 2011 then the max flash sync speed is one increment lower.  I assume this means that for cameras like the Canon 5D Mark II , the max flash sync speed with the 600EX-RT is now 1/100. In fact, a (!) warning signal appears on the speedlite’s display at any shutter speed higher than that. The manual also states that HSS isn’t possible.

Well, I can confirm that HSS is indeed possible. And from a few tests I have done, it seems like the output takes a small knock at 1/200 and HSS .. perhaps 1/3rd of a stop by the looks of it. At 1/250th, there is a distinct drop in flash output. This is consistent with how speedlites work in HSS mode. So I’m not sure if I am missing something here, but I would have to disagree with the manual on this. HSS is indeed possible with the 5D Mark II, and quite possibly then with other previous models as well.

4. Group mode (Gr)
With this mode, you can control up to 5 groups of flashes, and each group can be set independently to E-TTL or manual. This is only possible with newer cameras, such as the 5D Mark III and 1D-X.  I haven’t tested this mode yet, but will try it out and update via future posts.

5. color filter / gel holder
Similar to the Nikon SB-900 / Nikon SB-910 the Canon 600EX-RT offers a holder for a filter that corrects for Tungsten light. These are keyed to the camera’s AWB settings to adjust the WB of the camera if it detects a gel on the speedlight.

6. flash firing restriction due to over-heating
When shooting in bursts, the flash may overheat. The 600EX-RT limits the tempo with which the flash can be fired, is slowed down to help prevent the flash head from damage from over-heating. 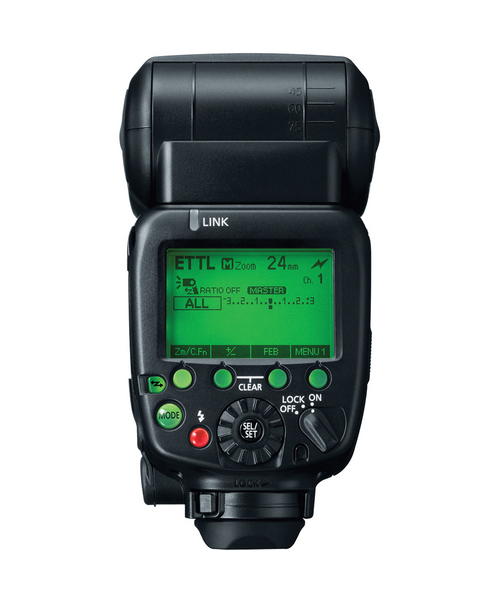 As I mentioned earlier, I used the speedlites in quite a simplistic way here just to enhance the available light. But as an indication of how well the speedlites work and how easy they are to set up, I am quite impressed already. The options and capabilities are endless. This is going to be an interesting piece of gear to explore, and I’ll continue to add more articles relating to it.

My final verdict might be quite a bold statement, but for me, this is an automatic upgrade from the Canon 580EX II. There are so many improvements in the handling of the flash, that it is much easier to use and set up. And then, the cherry on top of it all is the radio control of the slaved units.

Purchase these items via these affiliate links

32 Comments, Add Your Own