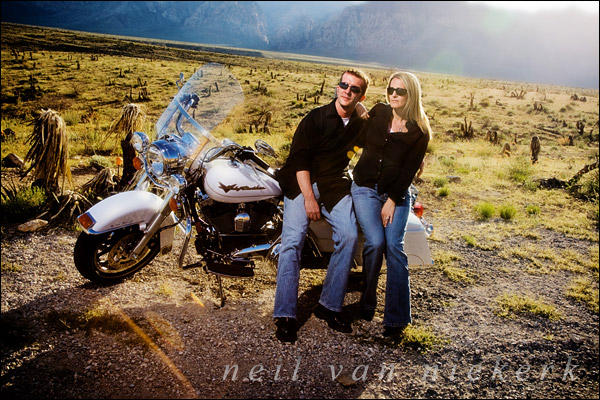 Even though most of the tutorial pages here deal with on-camera flash, I don’t limit myself to just using on-camera flash. When I need off-camera lighting or when I need more juice from my flashguns than a speedlight can deliver, I use the Q-flashes made by Quantum.

For this wedding in Las Vegas, I decided to travel light and as an additional flashgun, bring along a single Quantum Q-flash in addition to the two speedlights I normally take along with me when I photograph a destination wedding.  I also wanted the flexibility of wireless TTL control over the flash, and therefore I chose a Quantum T5D-R with the Quantum Freewire Wireless TTL set-up.

In the photo above taken at Red Rock near Las Vegas, I had my assistant hold the Q-flash up high on a monopod and triggered it wirelessly.  This way I could fine-tune the flash exposure from the camera itself.  This allowed me to work faster than having either me or my assistant manually adjusting the flash the whole time.  (Anyone who is interested in my specific settings, the thought process is similar to the explanation here.)  I had the Wide-Angle Diffuser over the Q-flash, to spread the light more widely.

The Q-flash’s flexibility and power really came in handy for this next image. 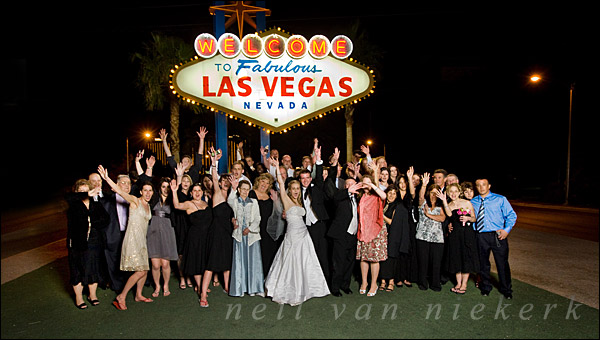 After the wedding we went to this famous landmark for a big group photo. I had to work fast to keep everyone’s attention since it had been a long day.  Also, the cops had just stopped to move the two buses out of the middle lane … so I really had to shoot fast and nail the few images I took here.

I needed a lot of light, and I needed the light as even from left-to-right as possible – so I had my assistant hold up the  Q-flash T5D-R with a Quantum wide-angle diffuser –  and had her pointing this through a white shoot-through umbrella to get the light spreading more evenly.  In the end I did have to go in to Photoshop to dodge the people on the left a little to bring them up to the same brightness as the rest of the group.  But using a powerful flashgun in this way gave me a very good head start on this image.

So I am showing this here as an example of something simple that you can’t do with a speedlight.  When I need juice! .. and an even spread of light and a set-up that works fast, I revert to using Q-flashes.

For those who are interested in the specific gear, here are the details of the exact equipment :

The camera with the Wireless QTTL Adapter (B&H), on top of the camera,
and the Quantum FW9T FreeXwire Digital Transmitter (B&H), clamped onto the bottom: 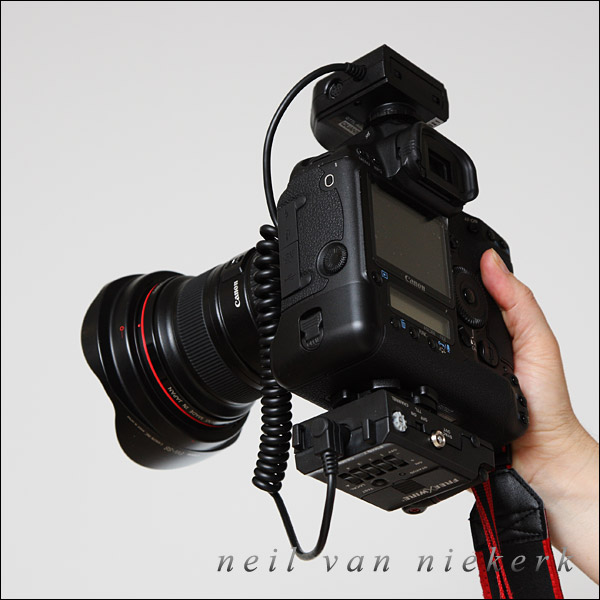 .
The Quantum Q-flash T5D-R (B&H), with the Quantum FW7Q FreeXwire Wireless Digital TTL Receiver (B&H), attached to the side of the Q-flash.  This is a very neat design with the Receiver fitting flush to the Q-flash, and drawing power from the Q-flash itself. 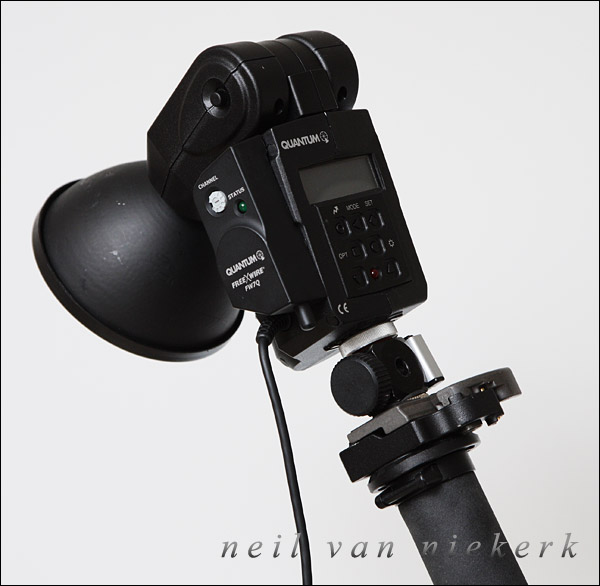 .
This set-up is all powered by a Quantum Turbo 2×2 battery, which is attached to the monopod via the Quantum Pole Mounting Clamp. 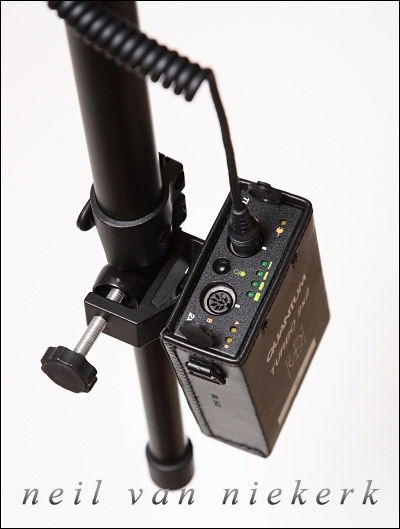