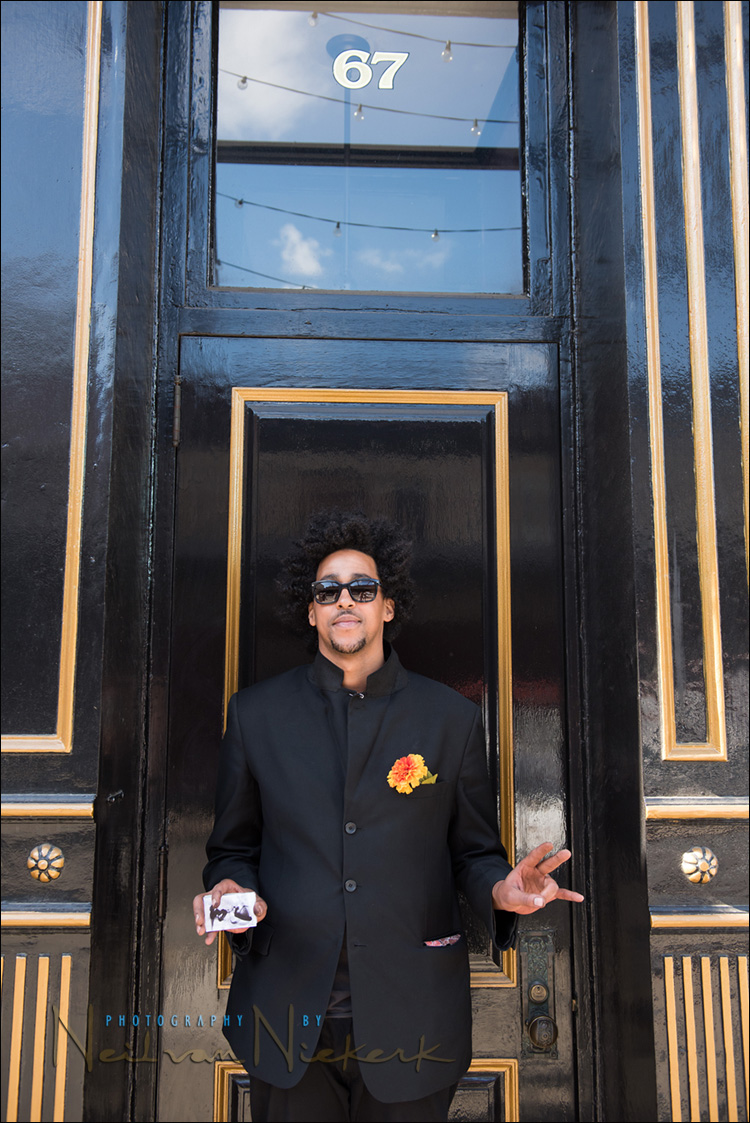 Informal / candid portraits on the street – Applying what you know

New York City abounds with characters – interesting and colorful people. This is one of those constants if you’re out on the streets in NYC, especially when taking photos or busy with a photo session … or as in this case, during one of the individual photography workshops in NYC. This man approached us to sell his artwork … and we ended up taking a few photos of him. With a few quick, automatic steps, the informal portrait is improved.

I’m one of those people, who, if tourists in Times Square give me their cameras, I will also pose them and correct a few things. Adjust an awkward pose. Hide shopping bags. Any quick fixes that will immediately improve even a camera phone snapshot.

Similarly here, I immediately asked him to go to this doorway a few yards away – the gold trim and black of the facade would perfectly match the dark suit and warm tones of this flower and his skin. Working in this doorway also meant we had shade – no struggle with hard sunlight. The pose is all his! He immediately went to this pose.

If you look at the 4 images in the entire sequence, you will notice the first image he had his left hand out in the sun. I asked him to drop his hand a bit so that he was entirely in the shade. Then another 3 quick photos, as I adjust my composition slightly to pull in more of the blue sky reflection. I knew the blue tones would balance the warmer tones to the bottom of the frame. 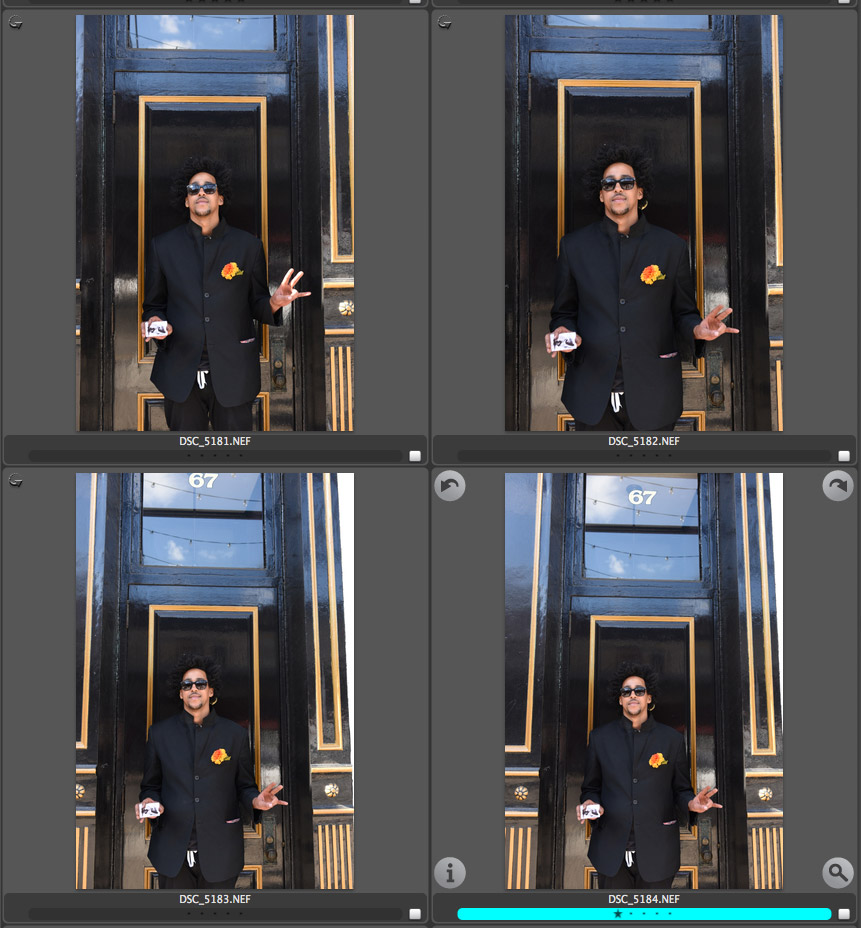 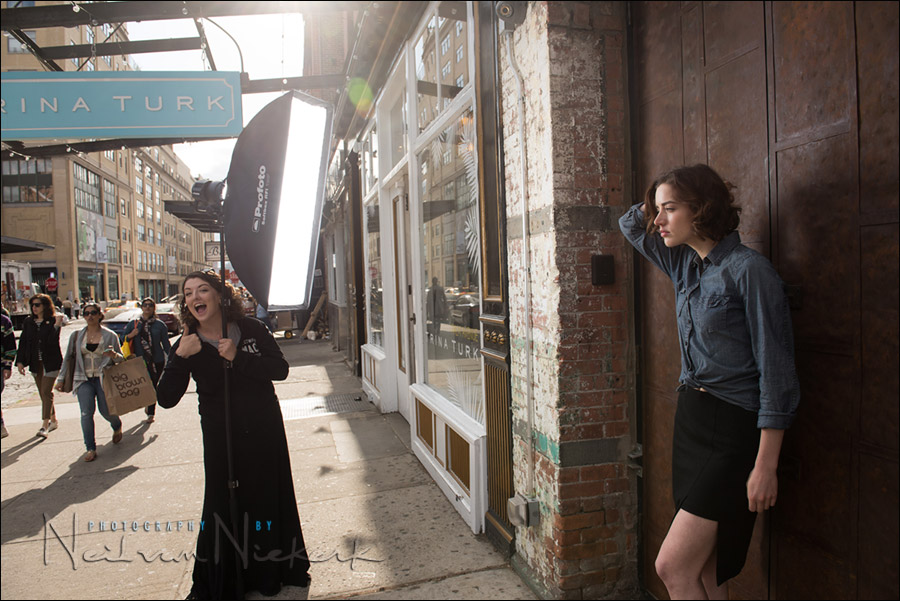 A short while later, we were all set up, photographing Anelisa with the Profoto B1 flash (affiliate). Then Roberto approached us and struck up a conversation. He told us that everyone around the neighborhood calls him the Mayor Of Meatpacking District. He said he appears on 54 different websites … so I offered that we make it 55 websites. Here he is … the Mayor Of Meatpacking District.

Coincidentally enough, without any prodding he struck up a very similar pose to the previous gentleman. I liked how the bright red colors of his shirt and hat were complemented by the warm tones of the metallic door. 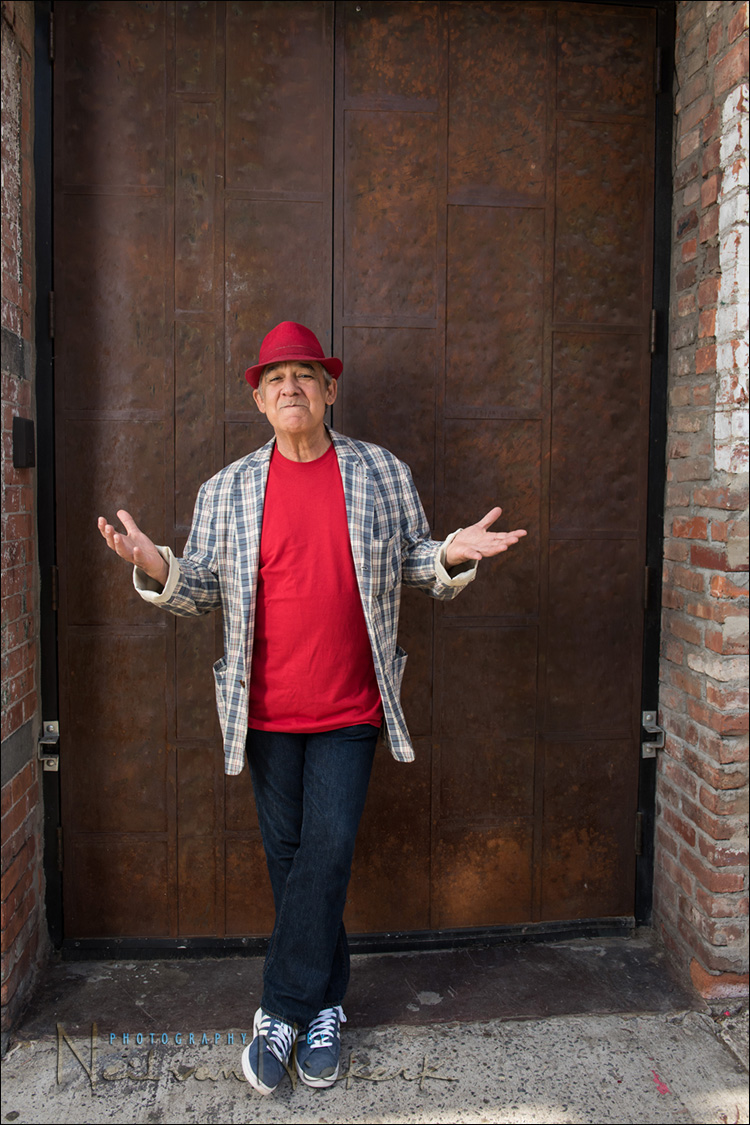 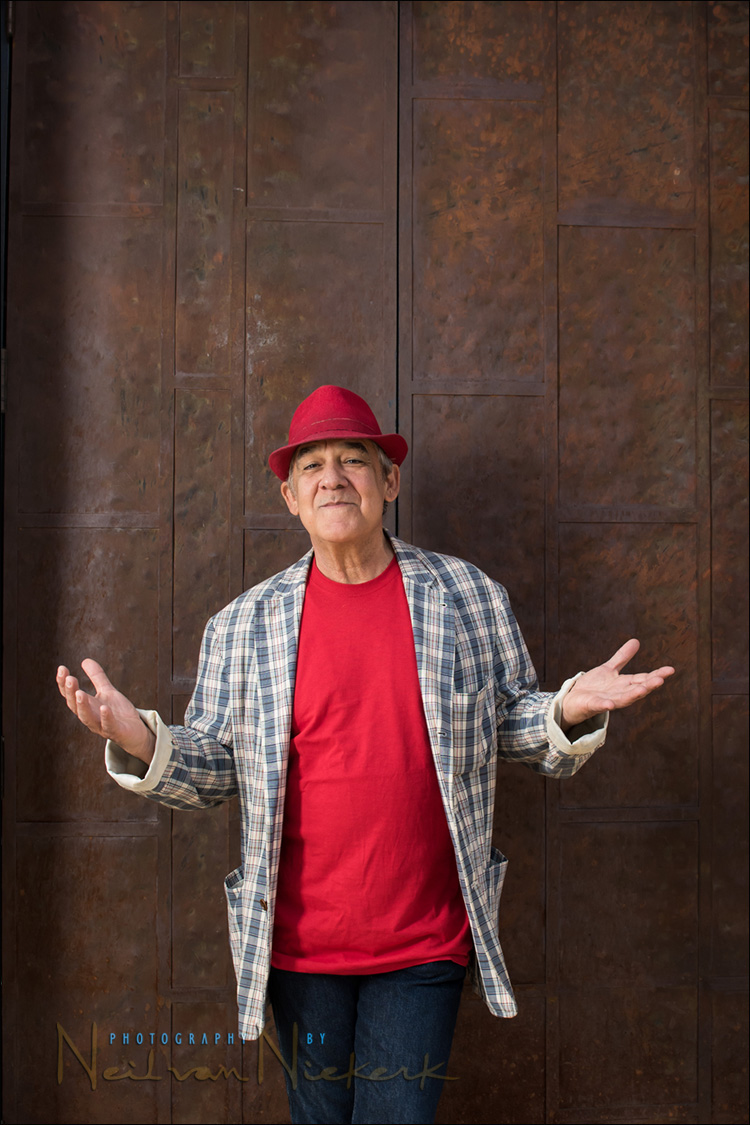 This second frame is from the next image in the sequence – very similar, but tightly cropped in post-processing of the RAW file. This is one thing where the high-resolution cameras such as the Nikon D810 (affiliate) which I used here – even cropping the full-length portrait as tight as this, I still ended up with a 13 megapixel image!

With the 2nd person, Roberto, the pose was all his. It was spontaneous after we had asked if he would stand in the same doorway where Anelisa had been. Very simple because the idea and lighting were already in place.

With the first portrait – the gentleman in the dark suit – there was more of a rapid-fire decision-making to make this portrait work better than a mere snapshot. If you want to adjust candid portraits, especially out on the street like this, you need to be quick and decisive. Just change one or two little things. Maybe three things. But it needs to be fast so it isn’t about your process. Keep the spontaneous feel by not overdoing it.

There is a pattern to shooting it. An algorithm that I run through as quickly as I can, without losing spontaneity:

With the photo of the gentleman against the black door, I asked him to move to that specific spot because I knew it would be a complimentary background. Any other time, I might clean up the background by throwing it out of focus. Or I might hide distracting elements behind my subject, by me moving to the side or crouching lower. I like backgrounds that are uncluttered. And if a background is busy, then it works to your advantage if there is some pattern to the background, or if something in the composition leads your eye in to your subject. (Leading lines.)

Composition is as much about what you include in the frame, as what you leave out!  If in doubt, simplify the image.

With the image at the top, I decided to include the reflection of the blue sky at the top. I thought the colder tones would offset the warmer tones at the bottom, and add to the final image.

Even with no off-camera flash or additional lighting to help, I will still guide my subject towards light that is clean and open. I try to avoid harsh light.

When people stand in front of your camera, and it looks awkward, you can always nudge the pose a little bit. Subtle changes such as having them shift their weight onto the back foot. Or putting a hand in a pocket to avoid awkwardly dangling arms. Don’t have them put their  hands behind their back. Small adjustments like these can be done off-the-cuff without it interrupting the flow and spontaneity.