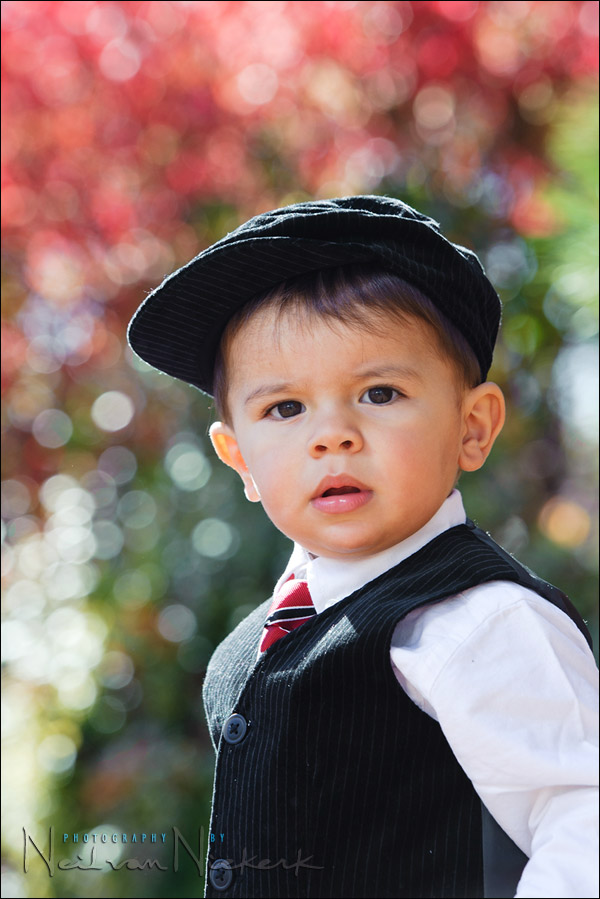 This adorable kid looked at the camera briefly because I was singing to him.  Kids are devious little creatures. They know when you’re calling them and will purposely ignore you.  So you have to be crafty too in getting their attention. Of course, you have to be ready for the moment … and shoot a lot. Sometimes that Decisive Moment is to be found in the edit.

The photo session was from 12 noon to 1pm. So the sun was high overhead. We’re often told that the sun directly overhead isn’t the best time to take photographs.  While this isn’t as ideal as the fabled ‘Golden Hour’ – that time just before dusk and just after dawn – there are ways of working with hard sunlight and still get great images …

The simplest way of dealing with hard sunlight – as described in this recent article on photographing wedding portraits in bright sunlight – is to have your subjects turn their back to the sun.  This way they are effectively in open shade, and the sunlight giving a rim lighting.  This does mean carefully positioning your subject in relation to the light, and yourself in relation to your subject, as well as the light, and the background!  It’s always more effective an image if you keep your background in mind.

I knew I wanted some out-of-focus color in the background, so I set my position so that I could use that red shrub and defocused high-lights.  I set up a softbox on a light-stand to my left.  Why my left?  Since I was using an on-camera speedlight as the Master flash, it was easier to hold my camera with the flash pointing to my left for vertical shots.  Then my left hand would support the lens, and my right hand held the grip … instead of the ‘hand under’ way of holding a camera, where your right hand is supporting everything and your right forefinger is tripping the shutter.  Shooting with your right hand under the camera just seems like an invitation for camera shake. Either way, it’s just comfortable for me to use the camera in a vertical position with the flash pointing to the left, whether I am holding the vertical grip or have my hand ‘over’ the camera.

I was shooting in TTL mode, since I knew I would have to rely on the TTL flash technology to take up some of the slack as this little guy and his sister moved around.

Normally when using flash as a mere touch of fill-flash with an on-camera speedlight, I would work with the flash set to around -3EV. This way the flash is less noticeable.  But since I was using a 24×24 softbox here, I knew my light would appear softer and still appealing, even if I used the FEC at a higher setting.

The Slave flash was in a Lastolite Ezybox softbox (24×24) on a Manfrotto 1004BAC lightstand.

My exposure was set so that the light on him was nearly the correct exposure, with the TTL flash then taking up the slack and opening up his slightly shaded face.  Dead simple.