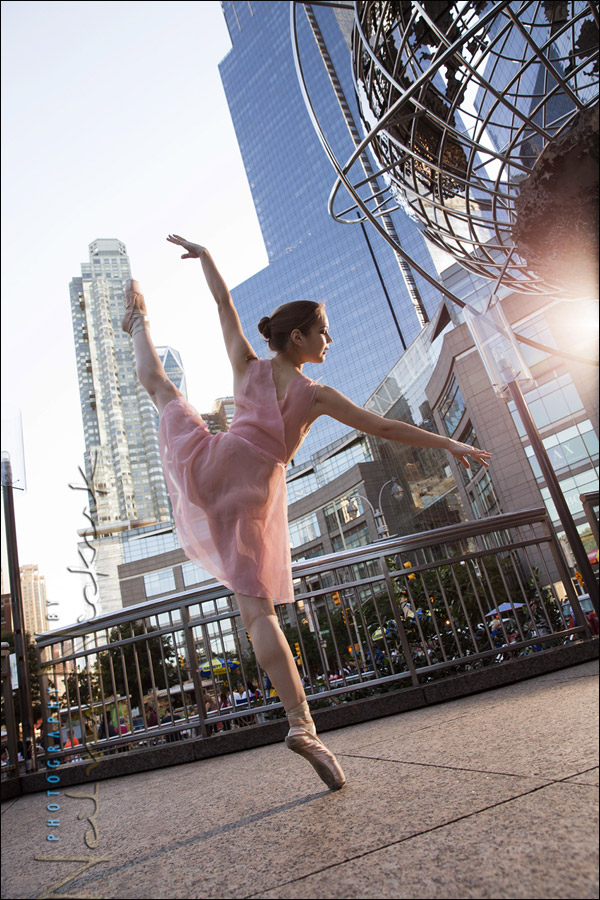 Late afternoon in New York, with the sun-light glinting off the glass buildings – dramatic light for a ballerina in an urban setting. However, the sunlight that was reflecting off the buildings wasn’t consistent, and did not necessarily fall in a place where we could use it. So I created my own with an off-camera speedlight just out of the frame – but positioned so that it intentionally flared, and also gave beautiful rim-light on Viktoria.

The pull-back shot shows how the speedlight was set up, and my own position, low down on the ground, to get that perspective. 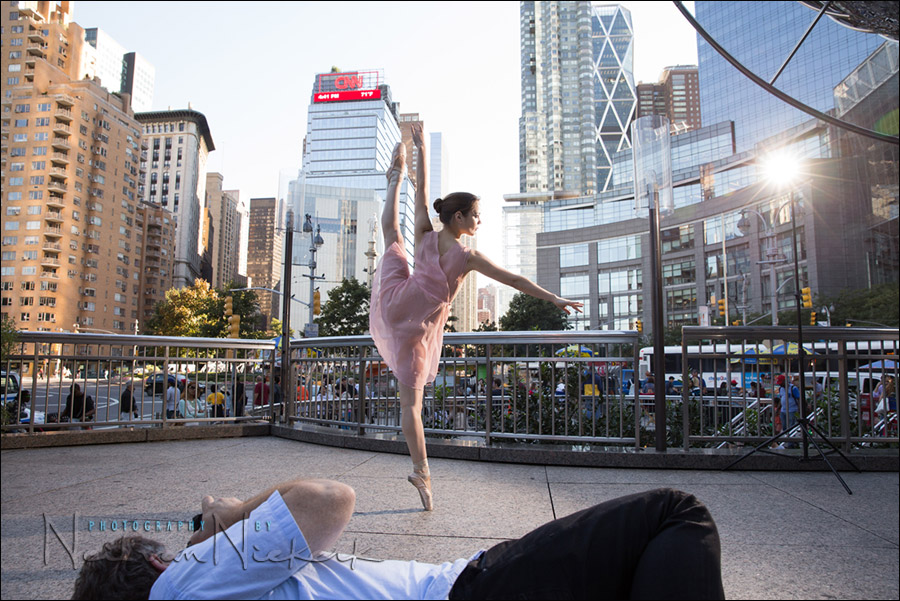 For the lighting used in this photo session I decided to travel light – and the sweetest intersection in power, versatility and control, is the Canon 600EX-RT Speedlite (affiliate) and the  Canon ST-E3 Speedlite Transmitter (affiliate) combination.

With the built-in wireless control of the 600EX-RT, I did not have to bother with external wireless triggers for a flash. The flash’s output (and mode)  easily controlled from the camera’s position with the ST-E3. For a camera and lens, I used my Canon 6D (affiliate) with a Canon 24-70mm f/2.8L II (affiliate).

In terms of the specific settings, there is a fair amount of leeway, but here is how I decided on my camera settings – I wanted enough depth-of-field, since Viktoria would change the exact point where she’d step, ever so slightly between shots. Her movements were quick, so I had to pre-focus where she would end up … but there would be slight changes in position. So a super-wide aperture would just mean more missed shots. So I settled on an aperture of f/5.6

At her peak movement, she was quite still for half a second. So I didn’t need action-stopping shutter speeds. So 1/250th worked fine. Now, you will notice that I had the shutter speed at 1/250 which is slightly higher than the max flash sync of the Canon 6D, which is 1/180 shutter speed. When we go into high-speed flash sync mode, there is a loss of flash power, but I intentionally went there. With the flash unmodified, ie, direct, there was enough headroom. I wouldn’t run out of flash power at the settings I was using.

The 6D has great high-ISO performance, so I could’ve raise the ISO a bit if I wanted to. But 400 ISO was fine.

I’m not a huge fan of tilted compositions, especially when I see it is a reflexive way that a photographer shoots in, without giving the composition real consideration. The tilted frame has to make sense in terms of the balance in the composition of the photograph. It is tough getting a perfectly horizontal / vertical image when laying on your side … but for this final frame, I feel the tilt works. Viktoria leans over to the right, and her body curves. And in the shape of her body, there is a perpendicular balance to the composition.

There is of course a certain incongruity of having a ballerina in a cityscape, yet because of that incongruity, the image works. The momentary stillness in the peak movement, versus the bustling street down below. The dominant tones are warm and cool – her skin and dress are warm tones, against the cool blues of the city. Then, the elegance of her movements somehow just looks really great against the backdrop of Manhattan’s skyscrapers.

Why did it make most sense to use the flash in manual mode instead of TTL here?