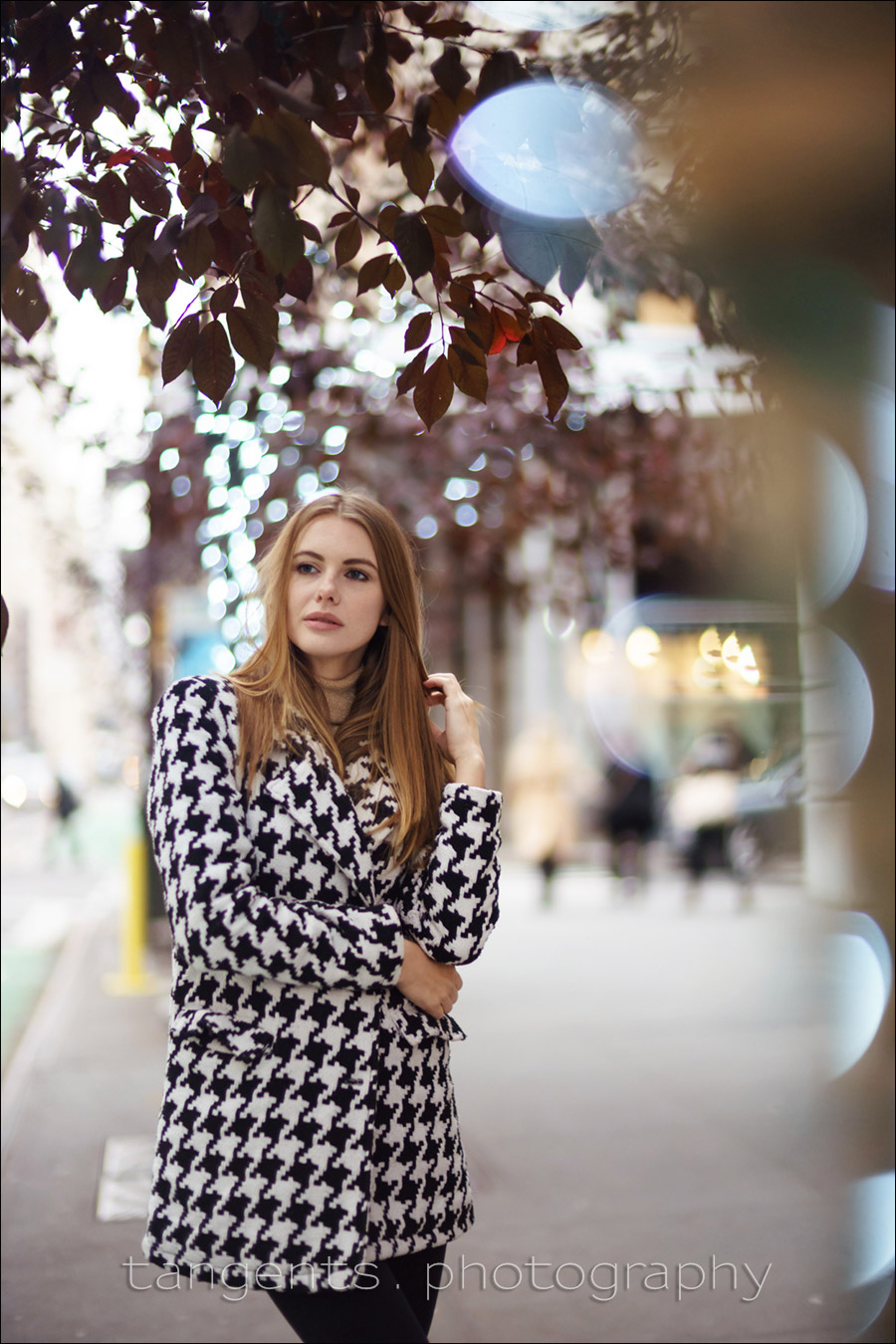 That crazy bokeh there is via the Mitakon Zhongyi Speedmaster 50mm f/0.95  (B&H / Amazon), taken at widest aperture, giving this wafer-thin depth of field. Even though this is a new lens, I would classify it as a classic or vintage lens. It is manual focus, and gives that delicious look to images exactly because of that DoF and bokeh. In terms of the composition, I like how the blue lights in the foreground is echoed by the same lights in the background.

How this photo session with Anastasiya came about …
My friend, Parker J Pfister was in New York for a few days, and asked if I wanted to meet up for lunch. Via a few text messages this soon became, “We should find a model and play!”

I texted Anastasiya, and she was available to meet up with us.

I then asked Parker what camera he was using – Sony A9 and A7Rii.
Good, I wanted to try out a recently purchased vintage lens, to be used on my Sony A7ii.

I then asked him if he has or needed lighting of some kind.
“Nope. I’m fine without. I am super low tech”, came the reply.

So there we had it – a near-impromptu photo session with Anastasiya out on the streets of New York, using available light, and shooting with some classic lenses. I should tell you then that Parker has given me some advice over time regarding which vintage lenses I should seek out. So there’s that common point.

I love working with, or observing other photographers. There’s often something that you can pick up and learn from them. Have a look at Parker’s website, and you’ll see work with a distinctive artistic style. So more than just hanging out with a friend over lunch, and taking a few photos for fun, I was excited at the idea of seeing him work with a model that I’ve often photographed.

This for example is where the photo above came from. It was a cold, grey afternoon. My first instinct would be to fall back on my usual approach – using off-camera lighting to punch up the portrait, as shown in this previous example with Anastasiya: Checklist for portrait photography on location.  It becomes a familiar fall-back. On the one hand it can be seen as a style, however, it can also be limiting in that it is “the same old thing” after a while.

With this photo above, I followed Parker’s idea of shooting with layers in mind – foreground and background layers. He stood close-up to some small blue lights wrapped around the tree trunks on that street, forcing these lights to appear as large defocused bulbs of light … which are then echoed in the background.

And you may well think this idea of using layers isn’t unusual, and it’s not. What I want to underline here is that most of us go along with our habits – a usual way of working. So this was just a good nudge again to be more aware, and look for more interesting opportunities than just relying on a default way of working. I need to be more aware again of the less ordinary, such as this in this example – using interesting available light – where I photographed Olena who was lit by the sun reflecting off the back of a stop sign. I need to be more alert again.

The photo at the top and this one below, were both shot at f/0.95 – an aperture where you have to be super careful about focusing. The way that the Sony mirrorless cameras implement manual focusing, make them really ideal for this. 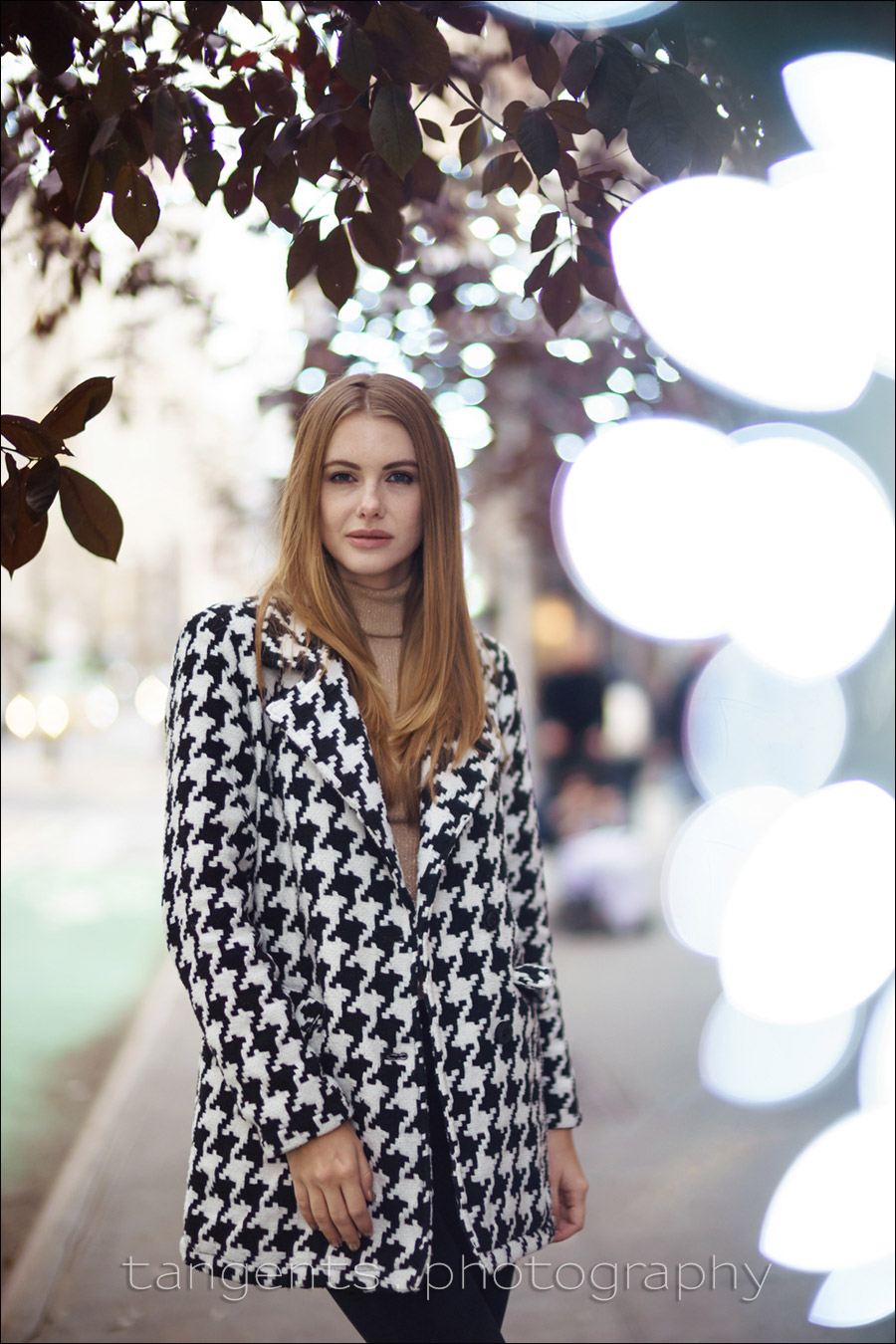 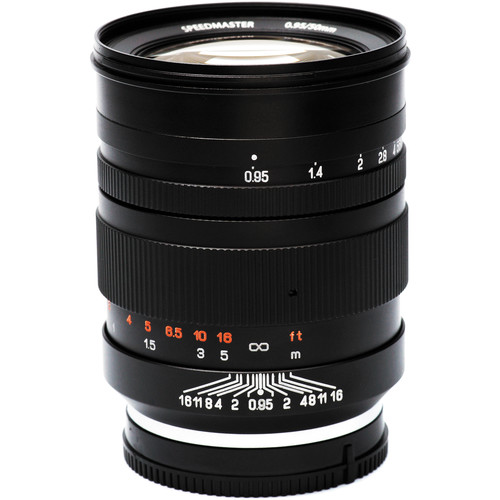 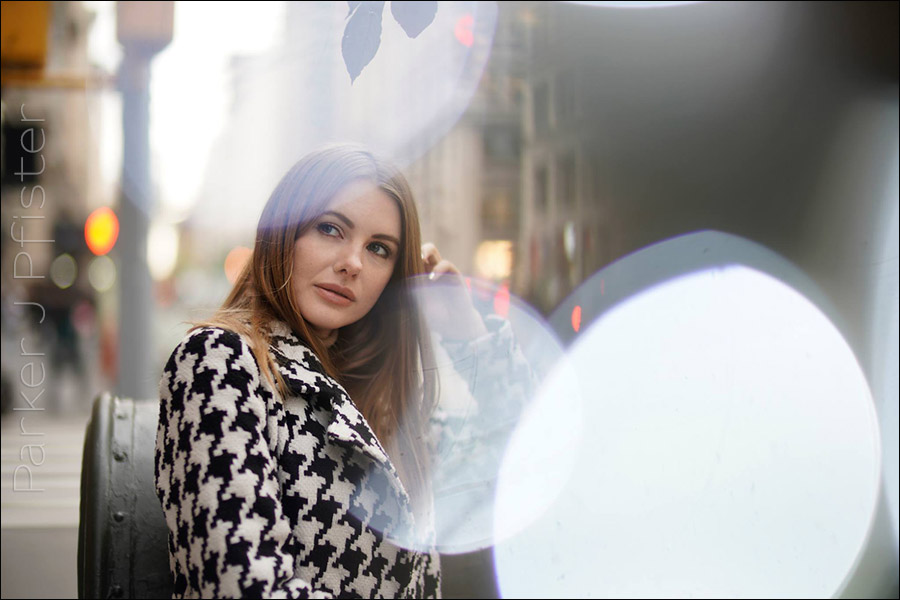 One of Parker’s images shot with the Mitakon 50mm lens. 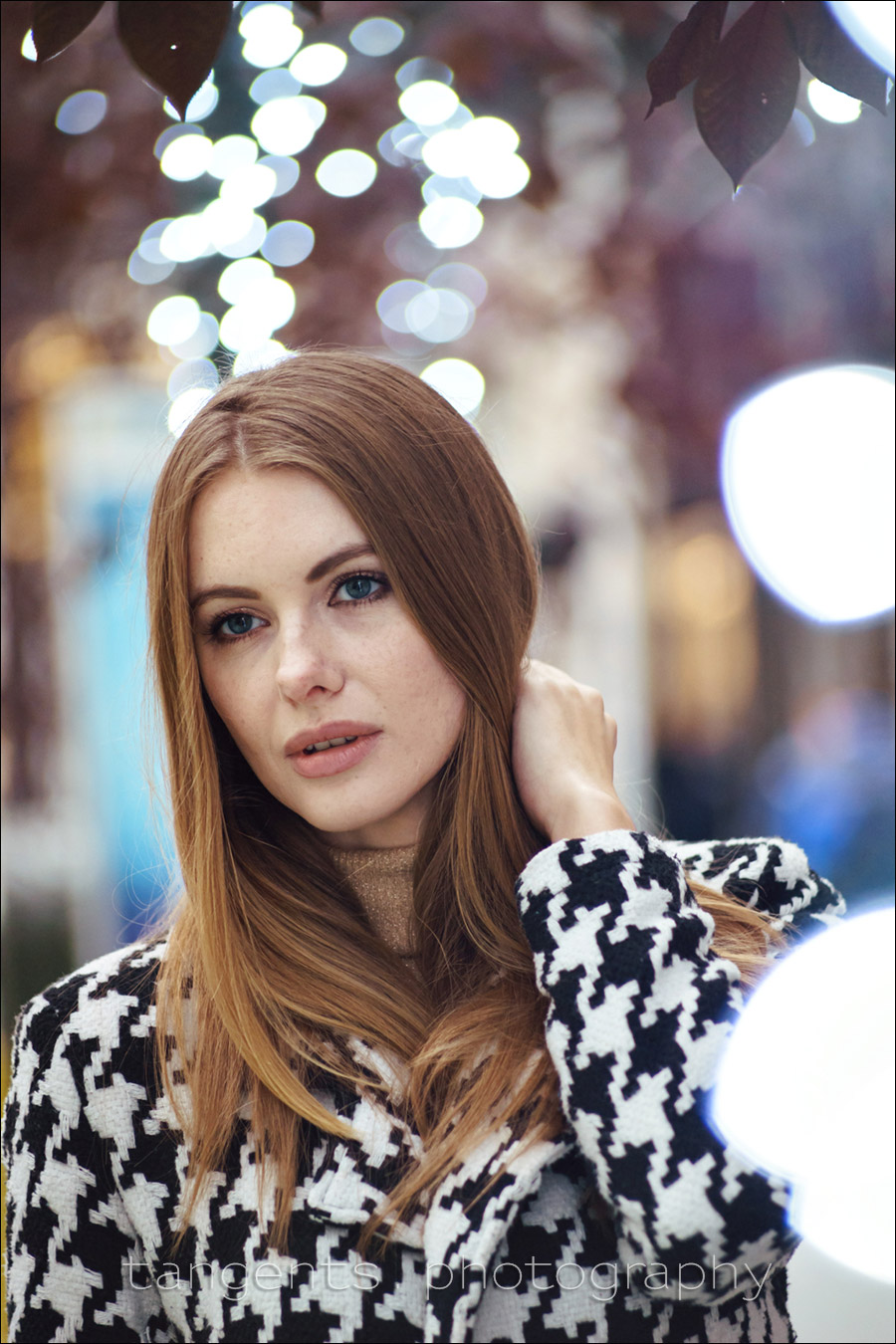 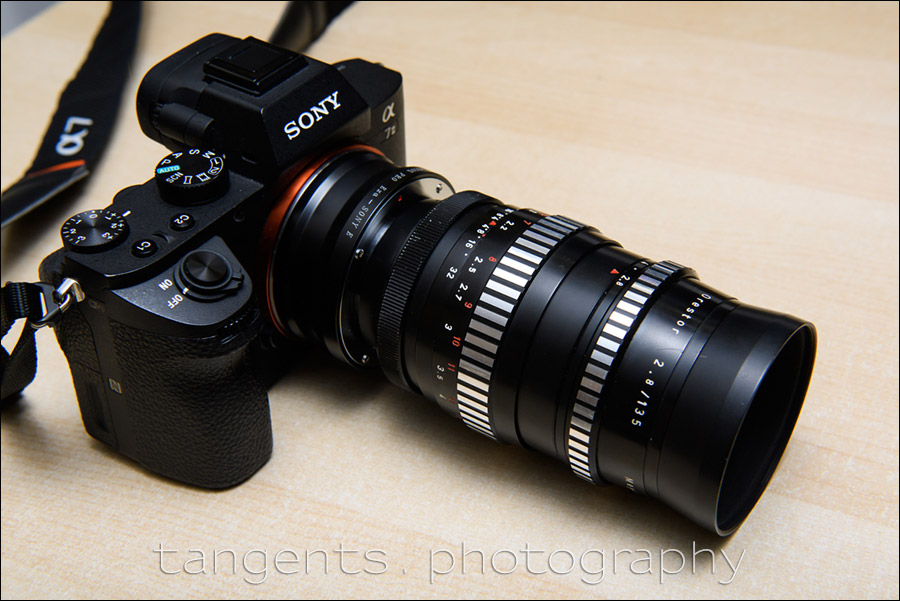 I was hoping that the background would have more of the bubble bokeh as some of the Meyer-Optik Görlitz lenses are famed for, but the lights in the background were elliptical. Still a cool lens, but I will have to actually get the legendary Trioplan 100mm at some point.

Here we were still playing with out-of-focus elements in the foreground to create layers. 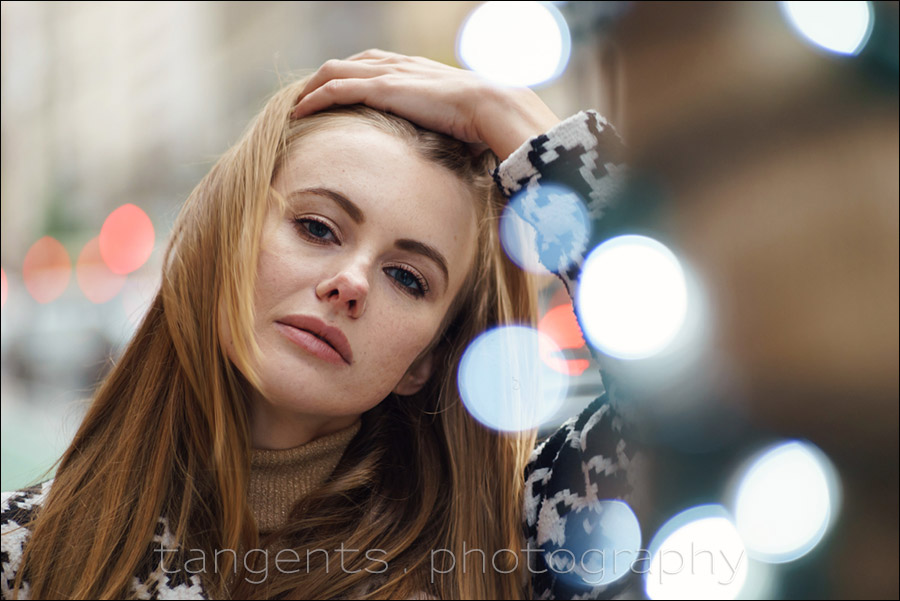 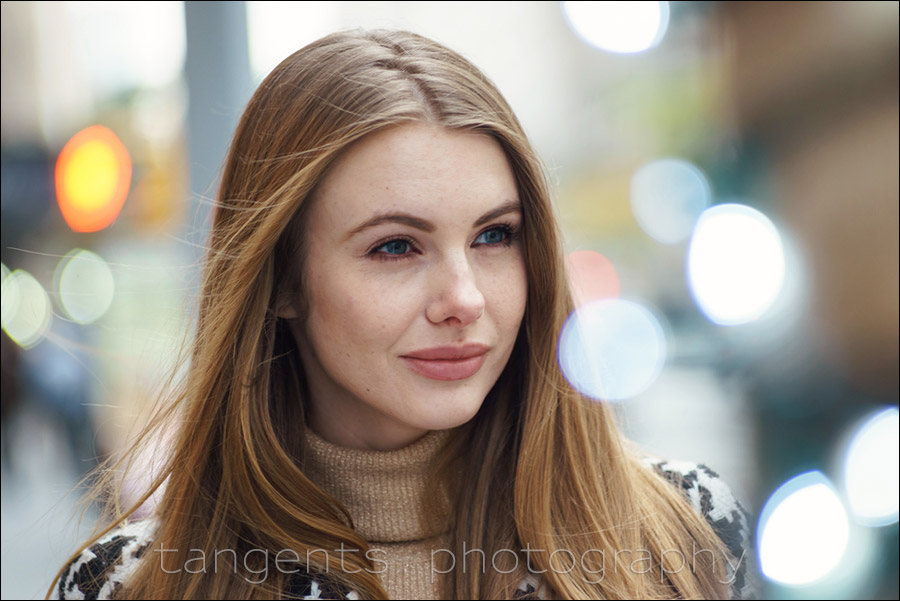 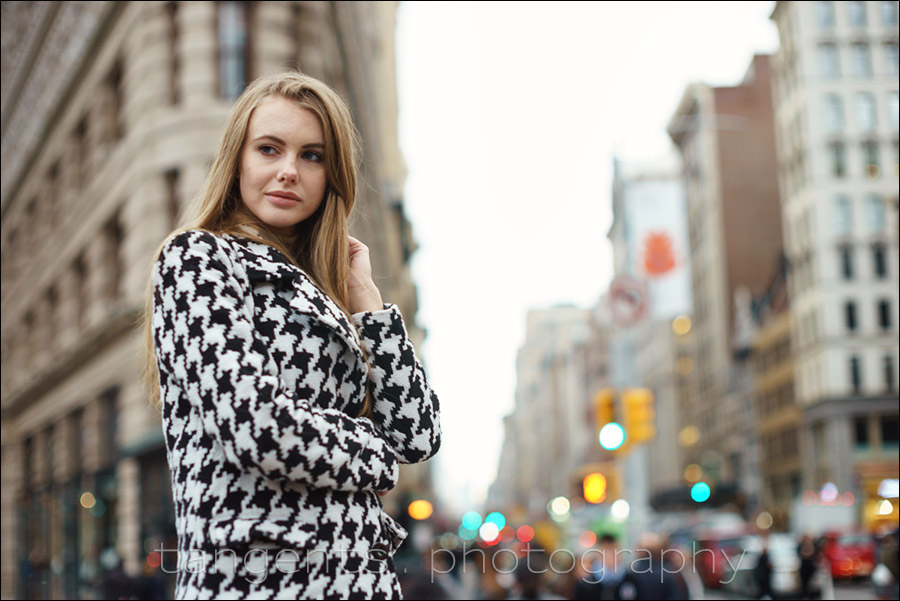 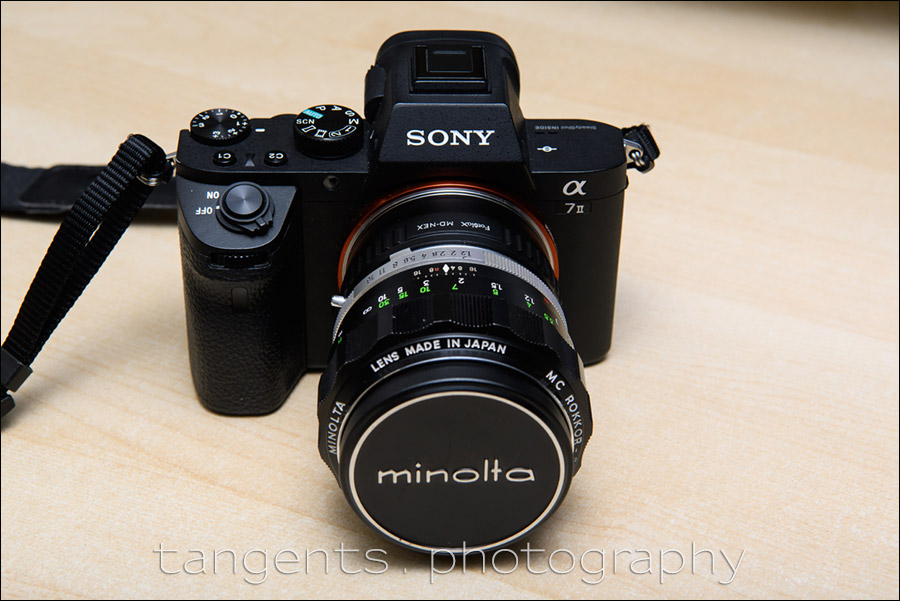 This lens is another that has an interesting bokeh, giving the background a painterly quality. At f/1.2 there is a soft hazy fuzziness to the photographs, which is something that could work for you. However, I prefer it at f/2 where the sharpness kicks in a little bit better. These three images of Anastasiya at the Flatiron building, were all shot at f/2 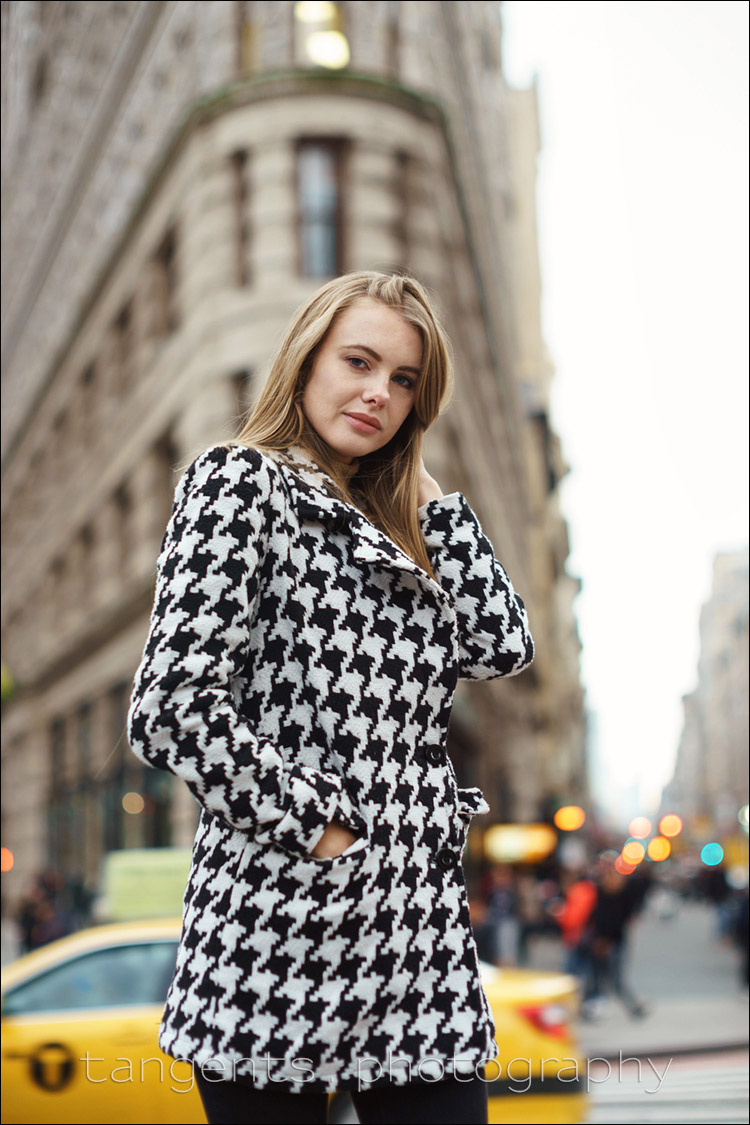 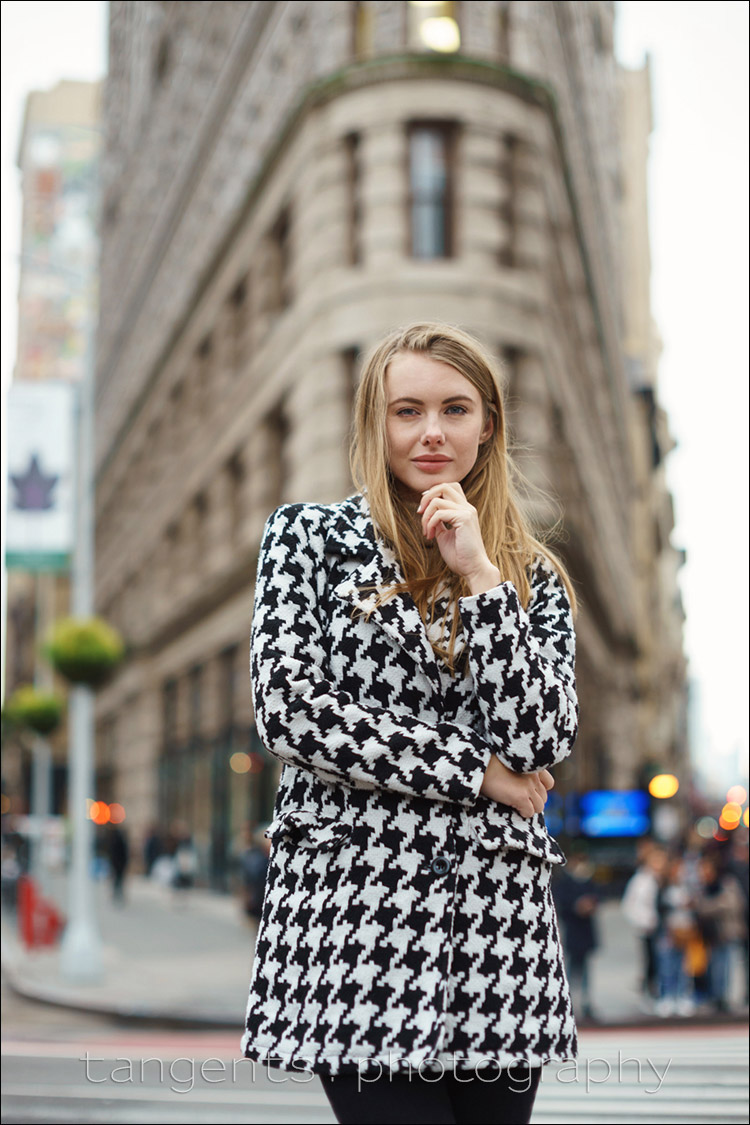 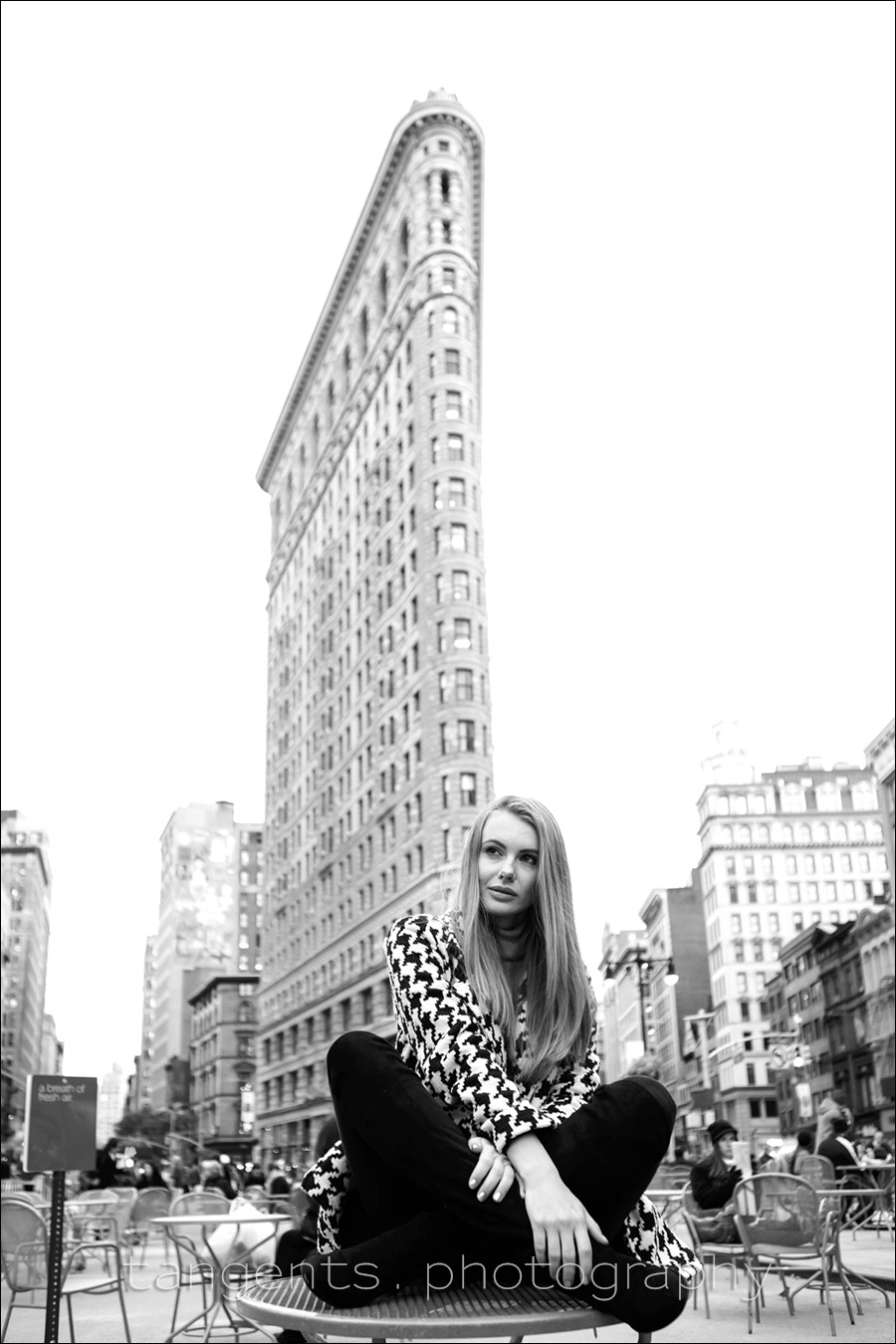 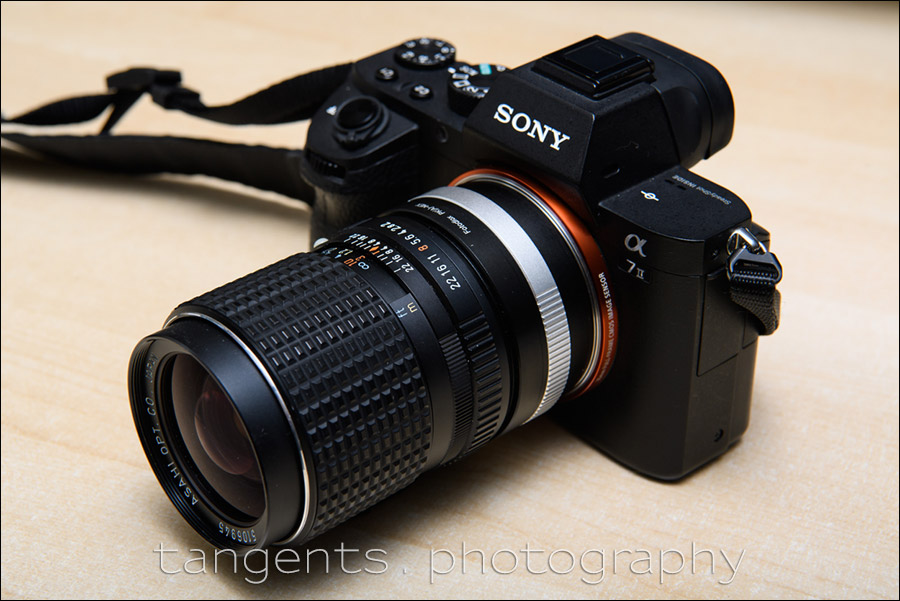 Still shooting near the Flatiron building, Parker set Anastasiya up on this table. He was shooting with a Sony 16-35mm lens, and I had my Pentax-SMC 28mm f/2 lens on. It was one of the very first vintage lenses that I went after, since it is a rare Zeiss-designed optic that only occasionally appears on eBay. I wrote about it in a previous article as well: Sony mirrorless cameras with vintage lenses. 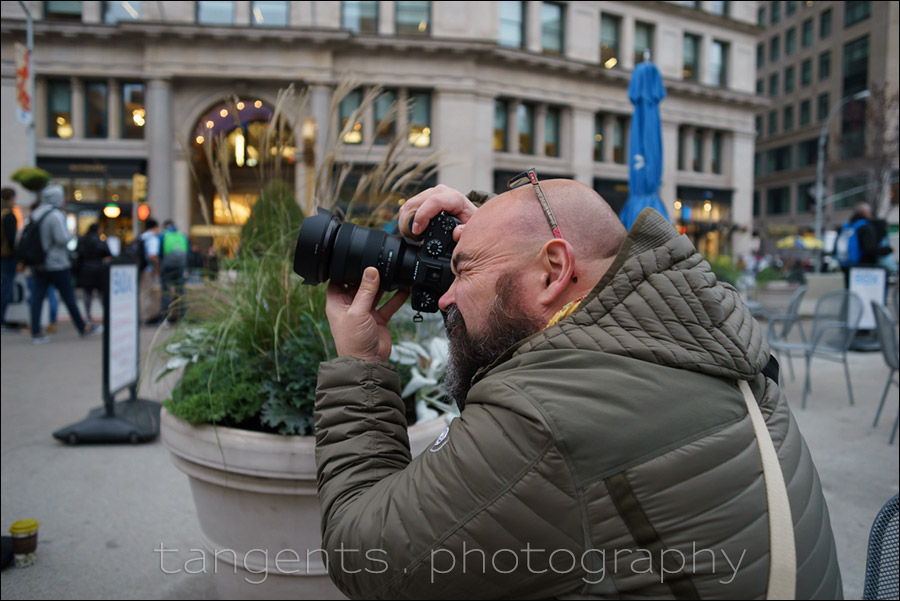 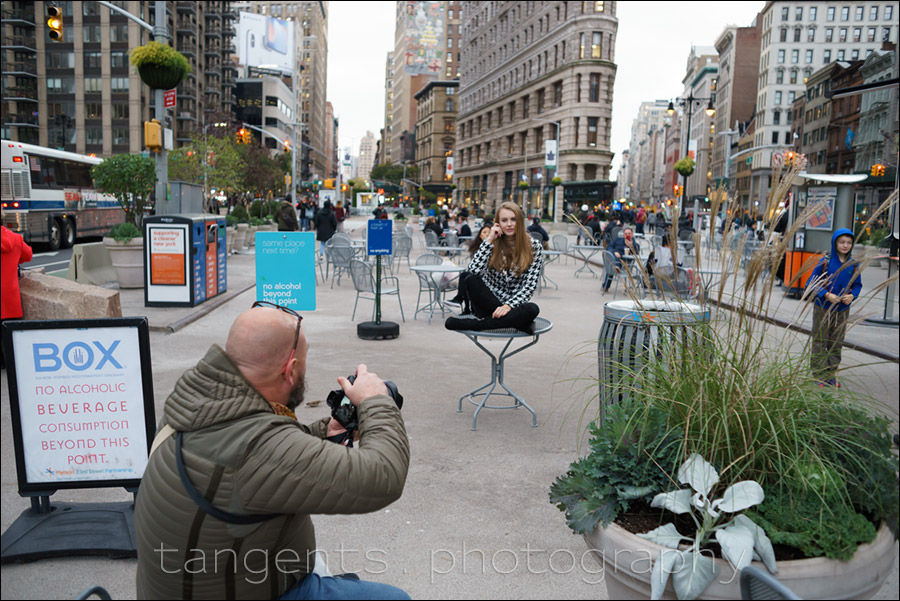