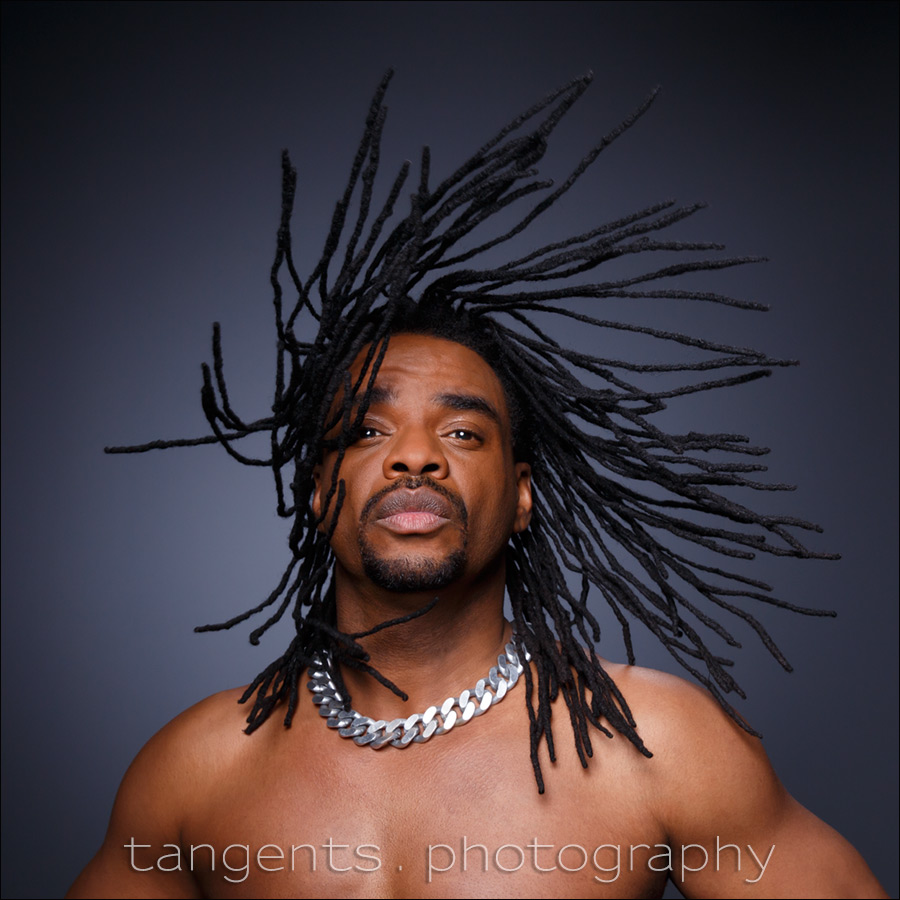 Shooting portraits in the studio has a challenge all of its own compared to shooting out on location – you are limited by the confines of the rectangular box that is the studio. You’re also limited by your imagination of course. Part of the challenge is that when you photograph a new client, you have to shoot consistent with your style – that’s why a client chose you – but at the same time, you have to bring some variety to the sequences of images. Even if it is just a slight tweak, I feel there has to be something else that you offer during every portrait session, even if just to keep it fresh for yourself.

I had the pleasure of photographing RJ Harper who is a professional scuba diver. Charismatic and with a big personality, RJ was fun to photograph. You can check one of his underwater video clips here on his FB page. He is certified with PADI as a Rescue Diver which means he’s experienced in saving people underwater. That skillset is the third level of professional certification in America.

With me in the studio was my friend Yasmeen Anderson, a  fitness photographer in NJ, and together we collaborated  on matching the brief given (photograph him with some products that he use and endorses), and also expand his portfolio with photos of him.

With this article, I want to walk you through four of the lighting setups we used in the studio. I need to mention that my studio is available as a Rental Studio in NJ.  I also present Studio Photography Workshops where we explore studio lighting.

For started the shoot with a straight-forward lighting setup for portraits. (The pull-back shot is shown below.) The photo shown at the top was one of the initial portraits, but with the smallest of changes … I asked RJ to shake his head to and fro. Gentle movements turned out better. We did about 40 frames out of which 4 or 5 worked, and this was the best of it. (Most of the photos had some of the dreads in the way of his eyes or mouth.) I also love his expression here – it shows confidence and pride, but with a calmness. 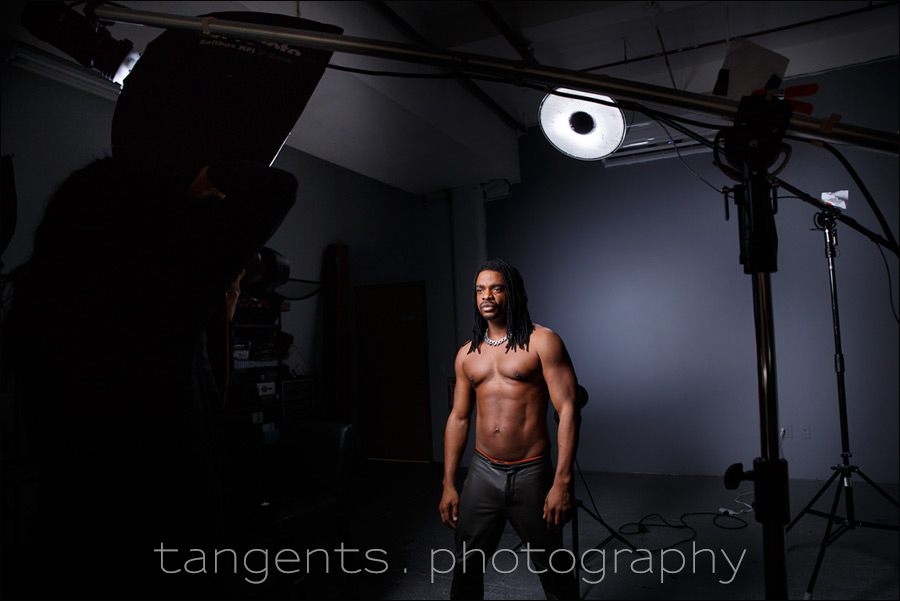 The main light was a gridded 3-ft Profoto Octa softbox. Gridded softboxes are my staple light modifiers. This video clip shows some of how I use gridded strip boxes in the studio. The back-lighting helped etch the strands of hair to separate them better from the background. The glow on the background wall is from a 7″ reflector dish with a grid on it.Again, the grid on this smaller light modifier helps control the spread of light.

One thing that I often have to explain to photographers using the studio – that grey wall in the back can be any shade of light or dark that you want. It isn’t the way it appears to the eye when you enter the studio. The lighting changes everything!  This is true, even for a grey wall. 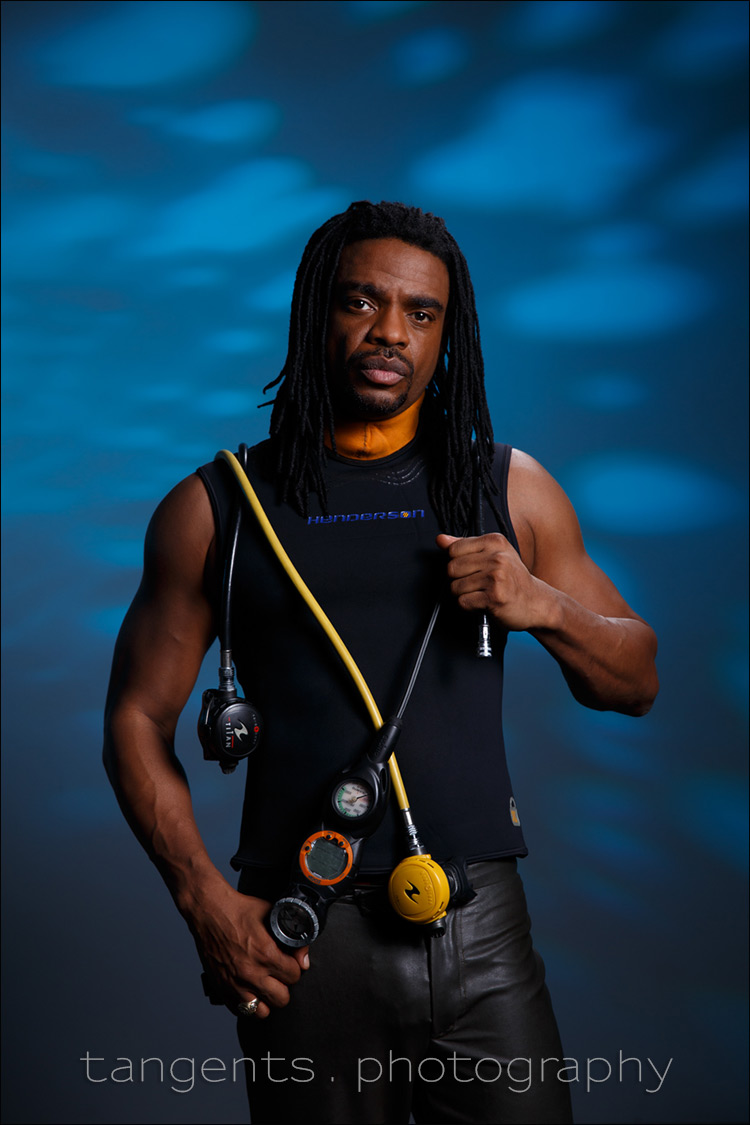 For this next sequence was to show some of the products that RJ endorses as a diver. The lighting remained very similar to the previous setup, but with a change to the background. We wanted to hint at the diving element, and used a blue gel from the MagMod2 Basic Kit (B&H / Amazon), which we projected on the wall with a gobo included in the MagMod MagBeam Kit  (B&H / Amazon).  This gave that abstract blue pattern, which hopefully is reminiscent of water.

The MagMod system is versatile and with the magnet fastening, really quick to change.

I marked position of the gridded Profoto 3′ RFI Octa Softbox o better show how it was angled more to the side for more dramatic light. The image at the very top had more even / flat light since the light was coming directly overhead from the photographer’s position. Moving the light to the side, created a more dramatic effect. Just that – the position of the light in relation to our subject. This simple idea also relates to this: Change your position, change the direction of light. 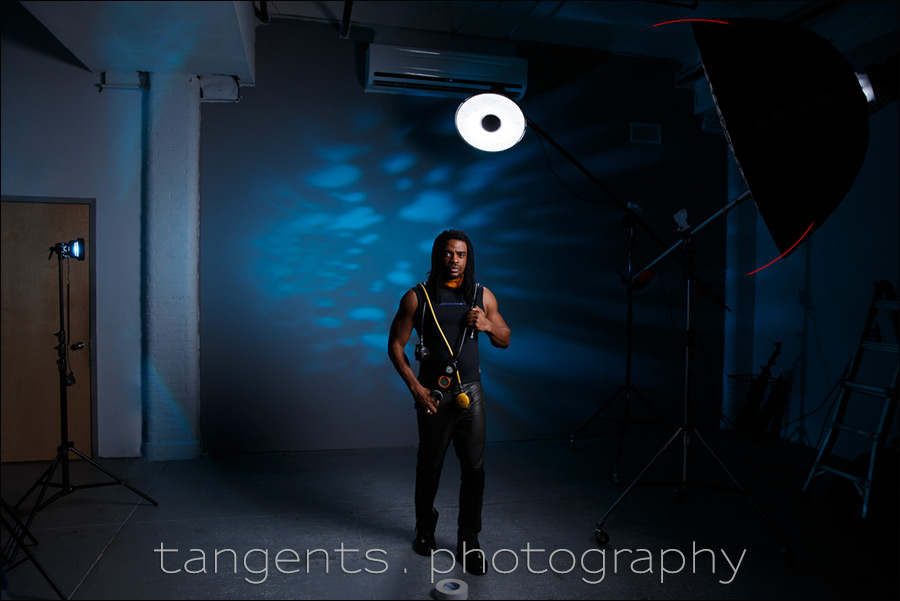 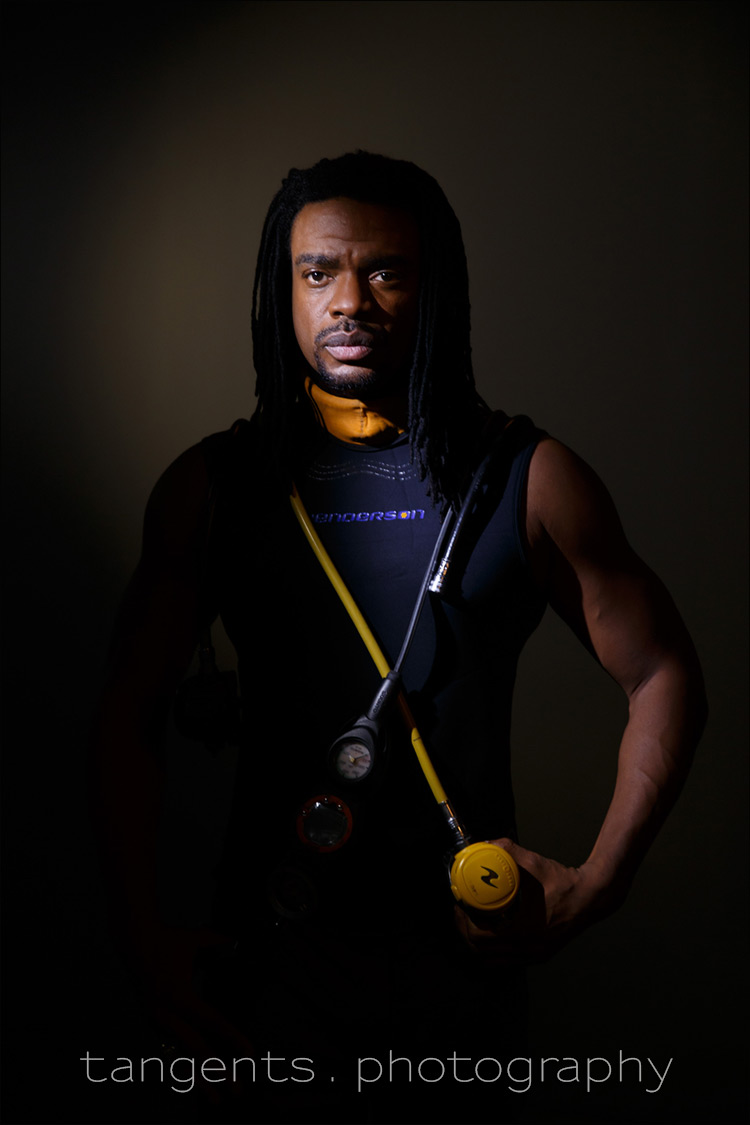 For this sequence, we wanted to go even more dramatic, and minimize the elements in the frame that would take your attention away – we wanted RJ and the relevant products.

Here I didn’t use the studio flashes at all, instead opting for continuous lighting. We used 4″ LED fresnel lights with barn doors to control the spill of light: Litepanels Sola 4 LED Fresnel Lights  (B&H / Amazon).

The pull-back shot shows how the two LED Fresnel lights were positioned. I marked the rear light in this image for clarity. The highlight on the wall is only lit by that LED light. None of it from the main light on RJ. This light’s effect and how it fell across RJ, was controlled by a set of barn doors. (As an aside – this set of lights is also available for use as part of the Rental Studio.)

The beauty of continuous lighting of course is that you can see the effect of the light immediately. This makes it easier to sculpt and shape the light for your needs. 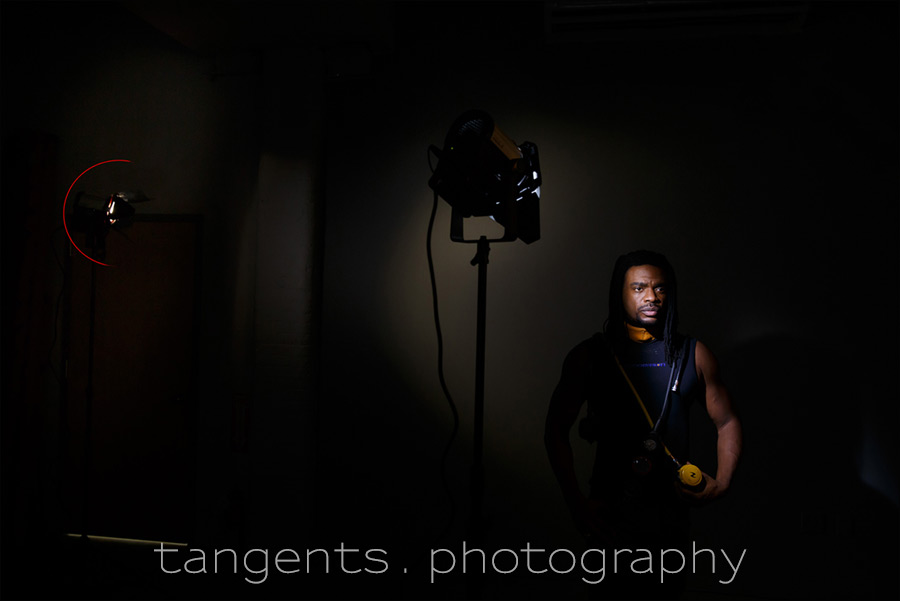 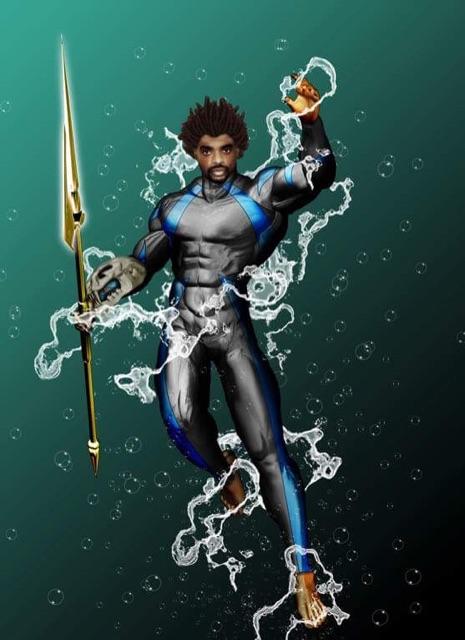 This next lighting setup is going to need some extra explaining. RJ is the subject of a proposed new superhero comic book series, created by John Jones. The motive behind this aquatic superhero is to inspire young people, and to promote ocean conservation.

Yasmeen had a specific idea in mind here in what she wanted to do with the final images. She wanted to mostly rim-light our subject, with the intention of manipulating the selected photographs in Photoshop, to show water cascading over RJ.

The lighting setup involved 4 studio lights with various gridded softboxes. The two lights overhead were easier to position on booms. The main light in front of RJ was just as fill-flash.  The three stripboxes on the side (and overhead) were the dominant light sources in order to give the rim-lighting we needed. We intentionally under-exposed his face. We really just wanted the outline of his body and arms. 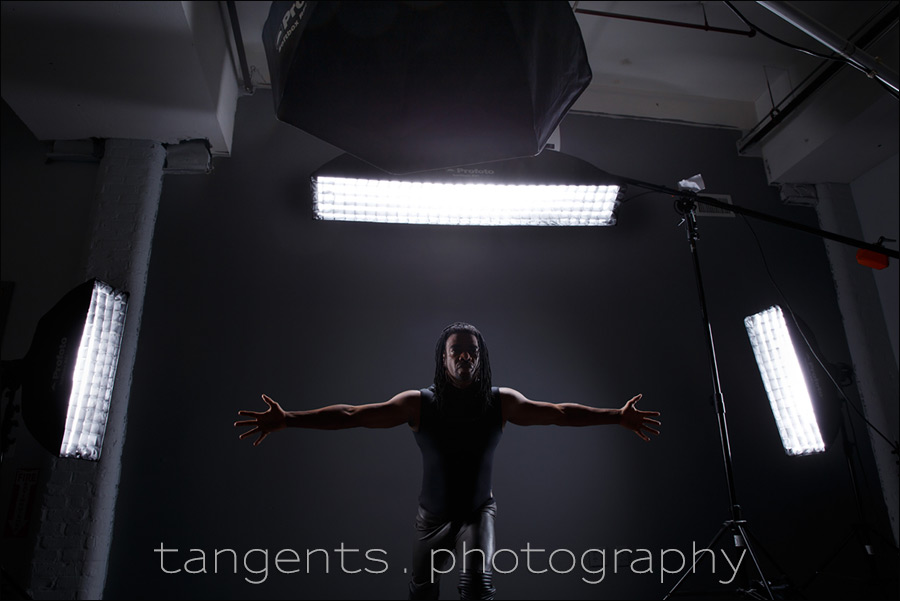 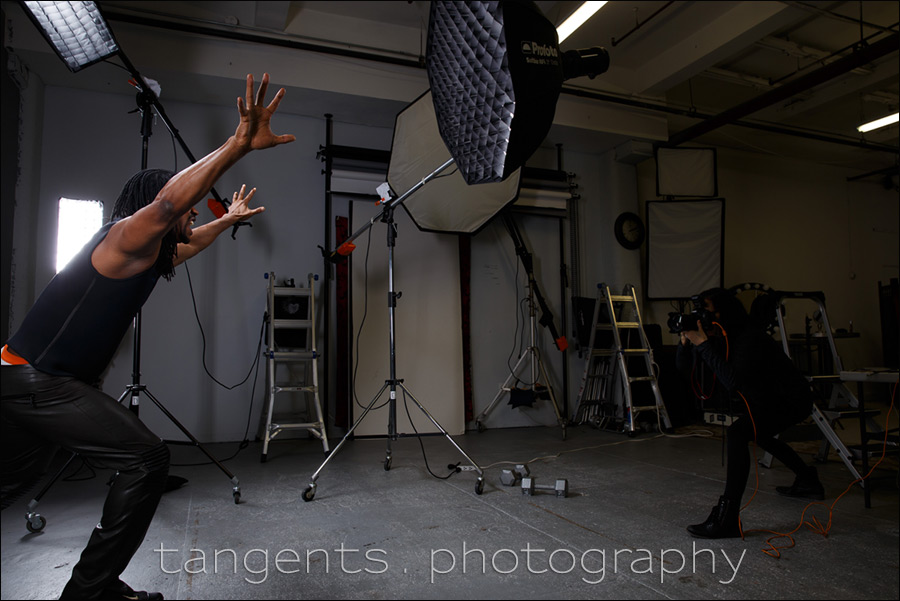