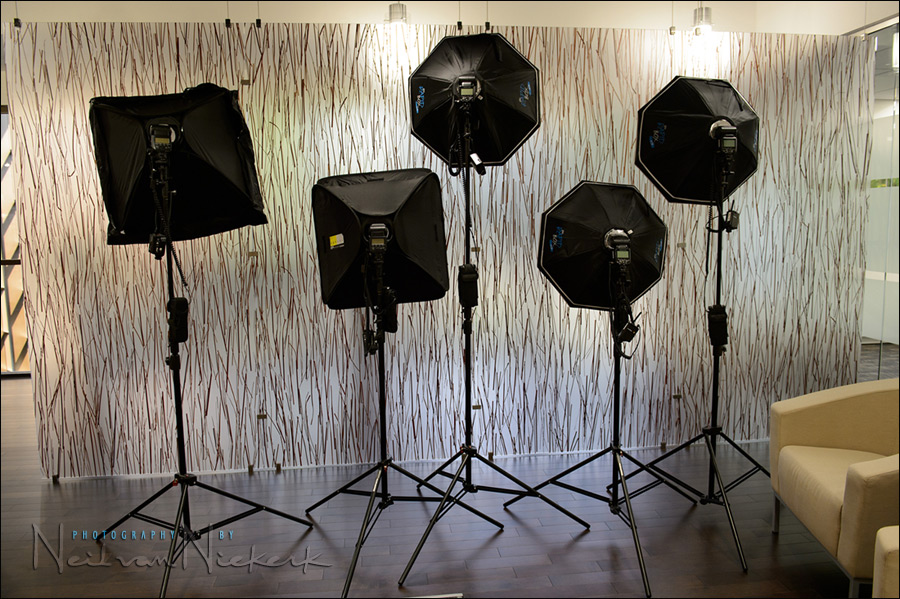 That’s me, all set up for on-location corporate headshots last week. Five speed light & Softbox set ups, to be placed in a different area each, to efficiently give 5 different looks. My client wanted head-shots of a list of people, with varying backgrounds around their offices. And also with different sets of clothes. We decided that 5 different looks would work best, and give them variety.

The best and most elegant option immediately seemed to be to  set up lighting in 5 different spots, with pre-determined exposure settings and flash settings … and then walking each person to each spot. This sounds like a mission, until you realize that 3 of the spots were within 20 yards of each other in the main lobby area.

Instead of moving a light-stand around, I would walk up to the already set up light-stand & speedlight, and switch on the radio trigger for that spot. All setting up and testing done before-hand. Fast and efficient. Then, at 30 minute intervals, the next person would join us.

Here is a close-up shot of one of those setups: 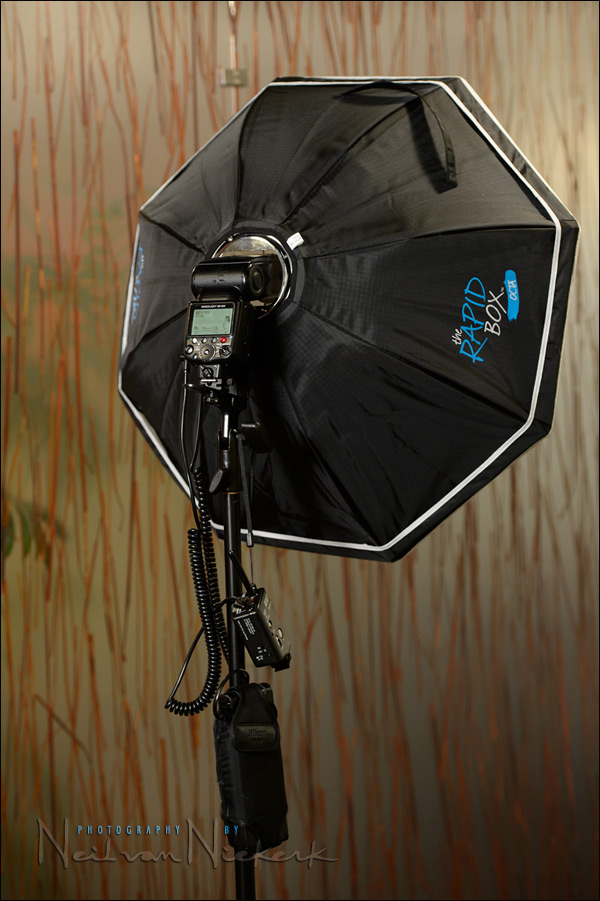 A medium sized softbox, a speedlight, and a battery pack and a radio trigger.  Simplicity.

Deciding on the gear I needed

There was no need for a lot of flash, since the light had to match the ambient light of the offices. For 4 of the 5 setups, I used the out-of-focus backgrounds around the offices to give a corporate-looking background. So there was no need to blast studio-levels of light. The speedlights in the medium-sized soft boxes were sufficient. In fact, at the levels the manual flash outputs were set, the battery packs were nearly redundant. (I say “nearly” because I didn’t want to take chances that a flash would run out of juice at some stage.)

Since I only had three Nikon SD-9 battery pack (affiliate), I used my two Canon CP-E4 battery pack (affiliate) with two 580EX speed lights. This brought the tally up to 5 speedlights. I recently changed from the Lastolite 24×24 Ezybox to the Westcott Rapidbox – 26″ Octa Softbox (affiliate), as explained in my review of the Westcott Rapid Box – 26″ Octa Softbox. So I just had to buy one more OctaBox. Spendy? Not really. The Octabox (and an extra light-stand) wasn’t more expensive than an assistant would’ve been.

By carefully working out what equipment I needed, and how to carry it in roller bags, it was just two trips to my car to get everything.

I initially thought of bringing my Profoto D1 kit when the company approached me, but when I scouted the location with the two PR ladies, I realized that at the camera settings that I’d be using, that speedlights would be sufficient. In the end, most of the speedlights were set to around  1/8 power, and I was shooting around the 800 ISO @ f/4 @ 1/100 mark. So the Profotos would’ve been overkill.

Examples of the results

Keep in mind that I worked in a fairly simplistic way here – the background would be colorful and naturally lit, and then I simply balanced my subject against that with the softbox flash. I don’t want to post examples of corporate clients, so I asked the PR lady who helped me on the day, to take a few photos of me where we had set up.

I used the 70-200mm f/2.8 zoom to give me a pleasant perspective, and a tight composition for the headshots.

For the one setup, they wanted an outdoors-y look. So I used the one door leading to a balcony. Here is the pull-back shot to show the actual setting. 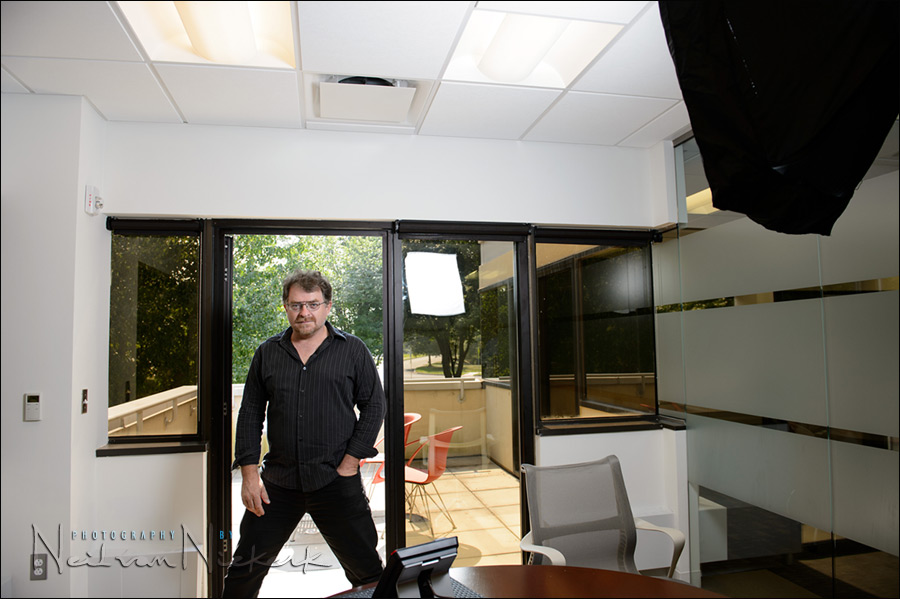 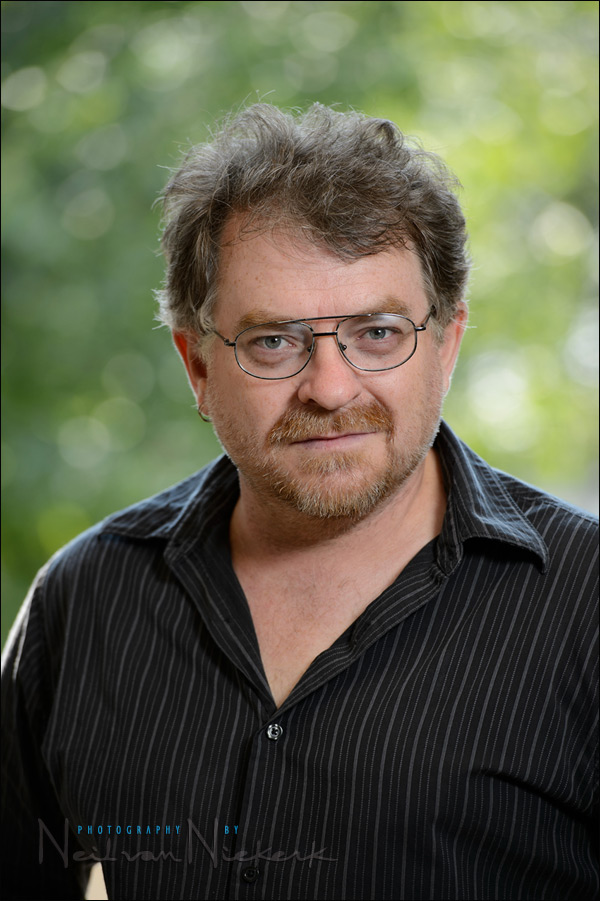 Here is one of the backgrounds that I used in another setup. When it is in focus, it is a mess. But when it is out of focus, and my camera settings chosen accordingly, it gives quite a surprisingly interesting background. 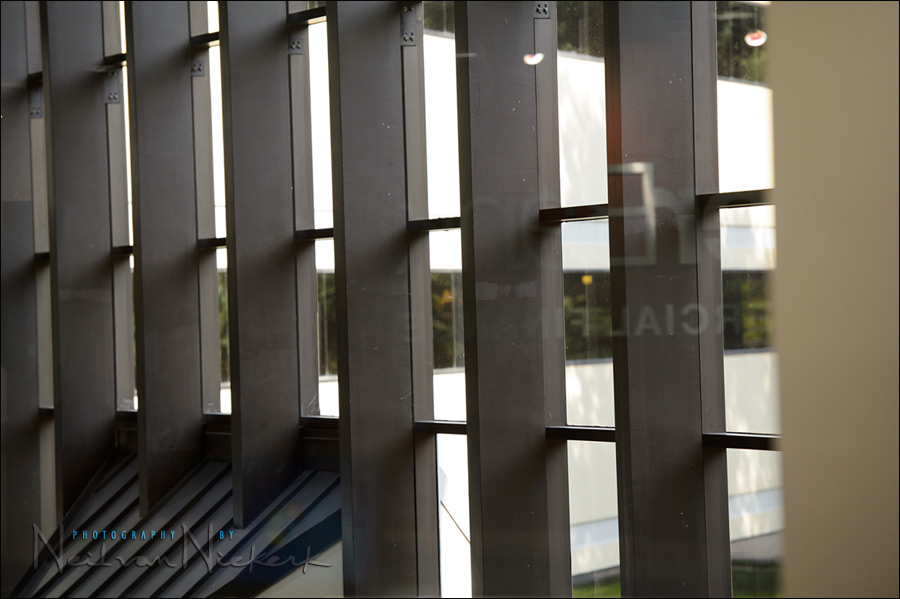 Just excuse the goofy looking expression. The PR lady was struggling with the heavy D4 and 70-200 combination, and I pulled a face … and she caught the last vestige of my expression. In other words, look at the awesome background instead! Keep in mind also that this is an approximate composition, but it will give you an idea of one set of results. 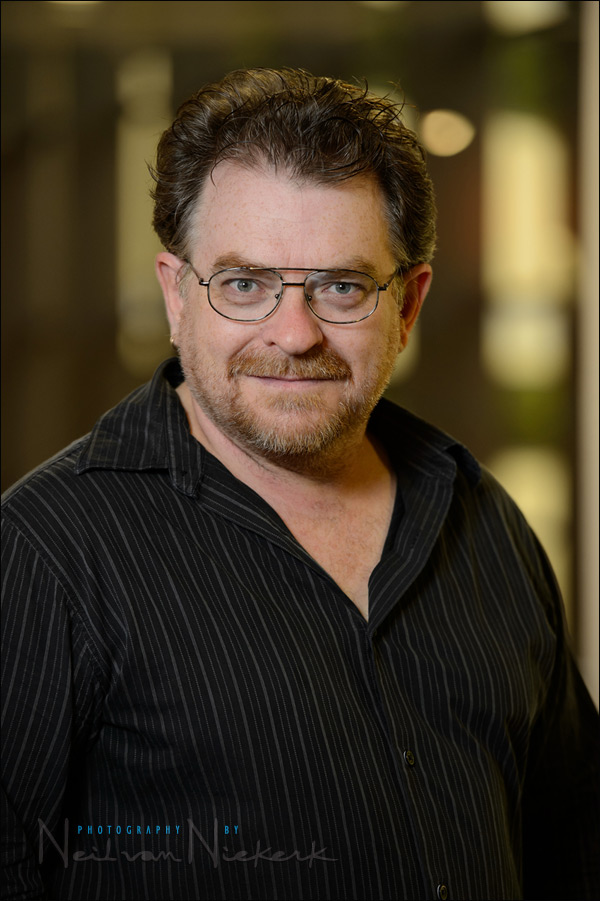 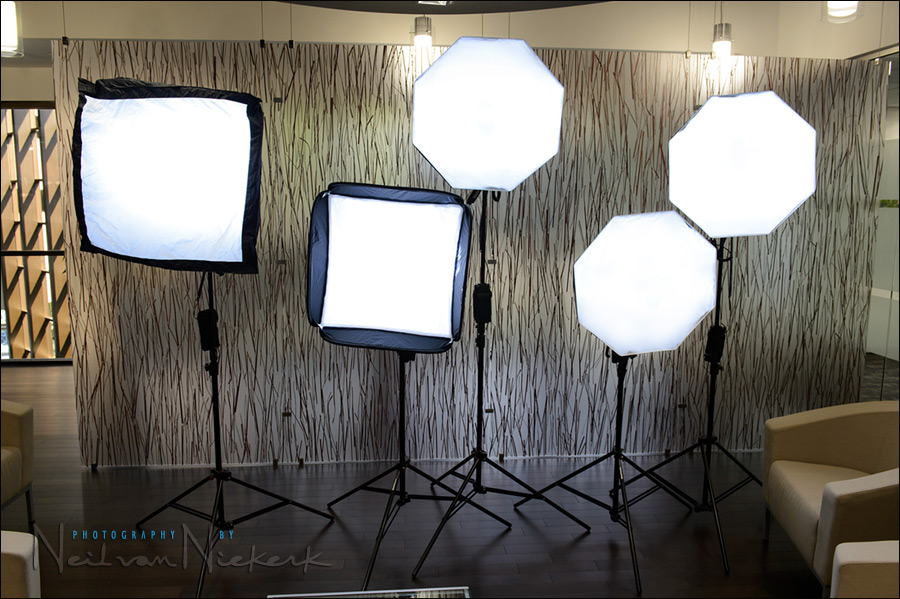 Looking at the softboxes all set up in the morning before I started, I felt like this guy that The Onion reported was seen using two computer screens. Yup, I wasn’t messing around either!