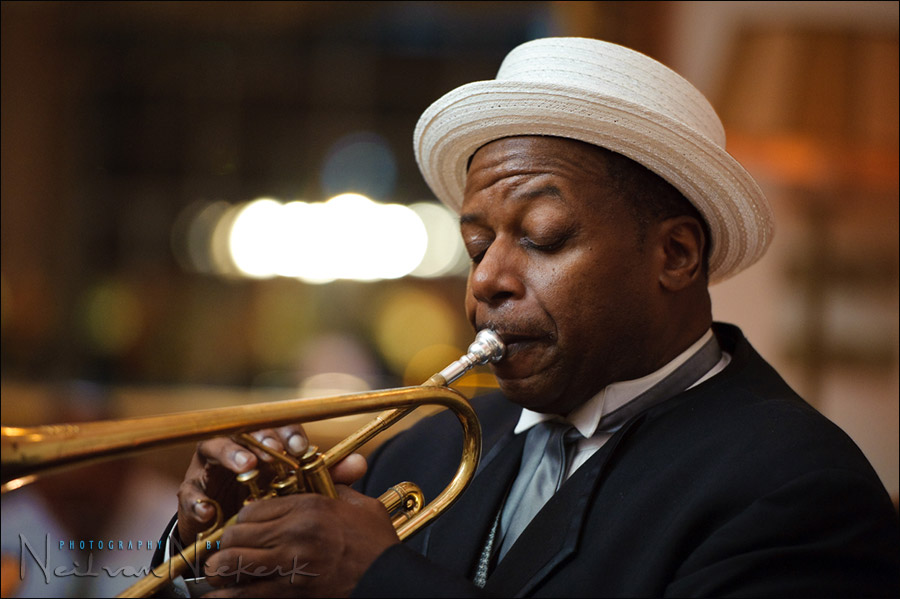 The expressive trumpet player in the band at a wedding – a simple portrait of this musician, sweetened with some bounce flash. The light on his face, is mostly flagged on-camera bounce flash. Flagging the flash stops direct flash from hitting him, as you can see by looking at the light pattern on his face.

With a bit of thought, and understanding of some essential techniques, using flash need not look unnatural, nor spoil the ambient light. For those who disdain flash and prefer ambient light only, quite often flash can help augment the available light, without appearing like flash at all. It just looks like great light. This is especially easy to do where the flash isn’t the primary source of light.

Here then we’re going to look at examples where flash is used in conjunction with the available light.

The basic technique here is that we meter for the ambient light, and then either:

a.)  make sure our ambient exposure is correct, and then could use flash to lift the shadow areas and make it a better image than it would’ve been without flash. This is essentially fill-flash. The flash isn’t the major source of light, and just helps lift the contrast.

b.) we under-expose the available light to a certain extent, and then let the flash pick up the difference, and give us correct exposure.

In the examples here I used TTL flash since the technology allows me to get to correct exposure faster than I would’ve with manual flash. Ideal for the times we need to shoot fast.

A.) Flash as fill-flash, where the ambient light is (nearly) correctly exposed.

With this portrait of a couple, the basic ambient exposure as shown in the left-hand frame, is correct. But the contrast is too high. I had posed the couple inside the archway under the staircase in Central Park. There is a flood of light coming in from the side, but not enough light coming in from the interior. This causes too strong a fall-off between the lighter and darker areas. Not as flattering as it should be. 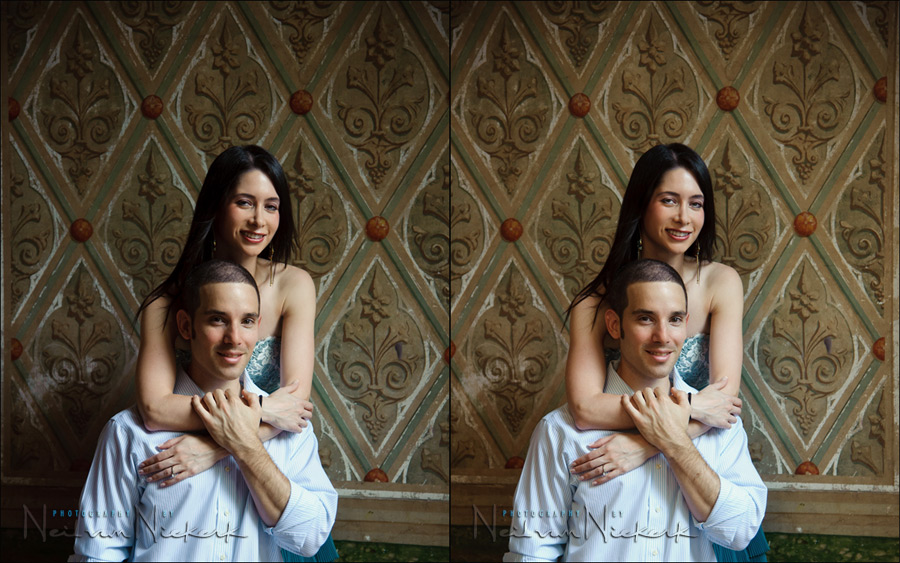 I don’t need the flash to “do all the work” in giving me correct exposure. The flash here is just fill light.

A closer look at the final image, where fill-flash was added: 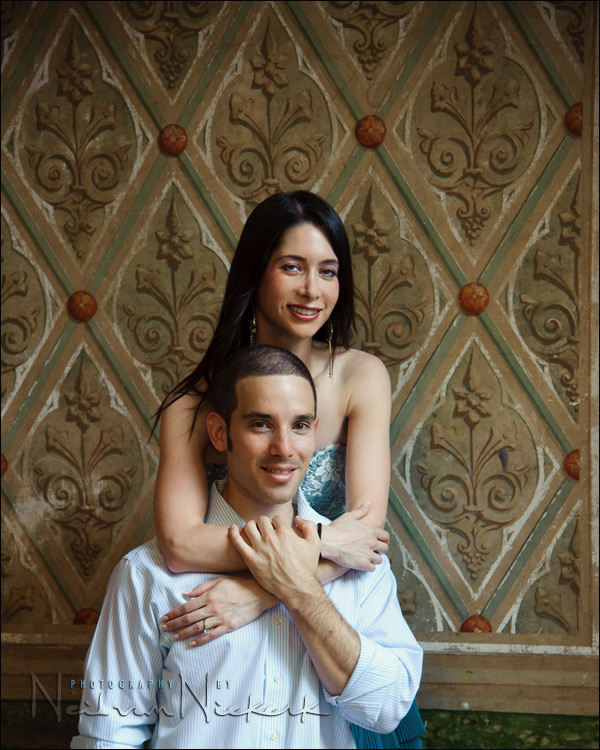 To give an idea of the size of the place that I bounced my flash in: 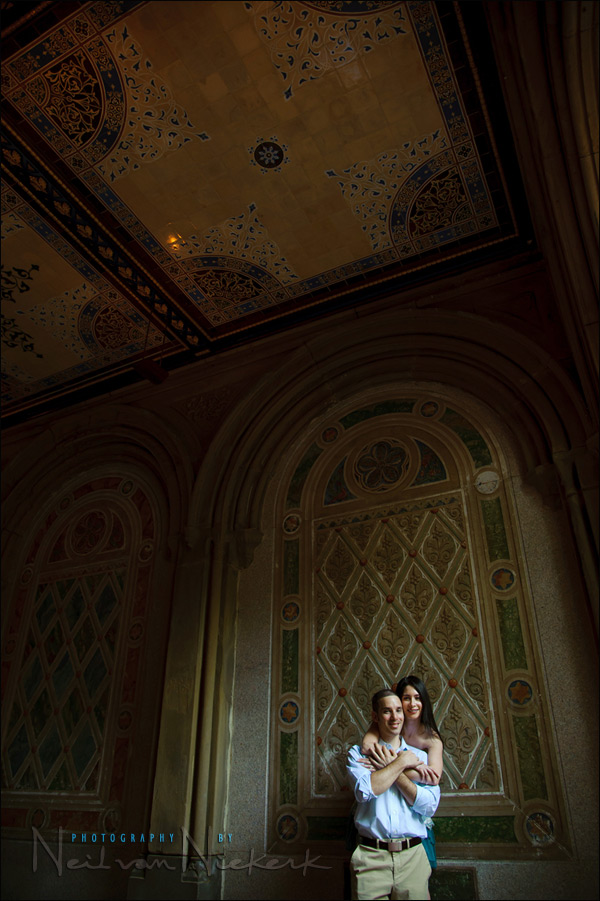 I bounced my flash into the area behind me, because I tend to bounce my flash towards the direction that I want my light to come from. I rarely bounce “towards” my subject except in specific situations. So the area behind me looked like that – a large open area with colored walls. With this, the light from the flash does pick up a color cast, and this is why it is imperative that we shoot in the RAW file format when bouncing flash. 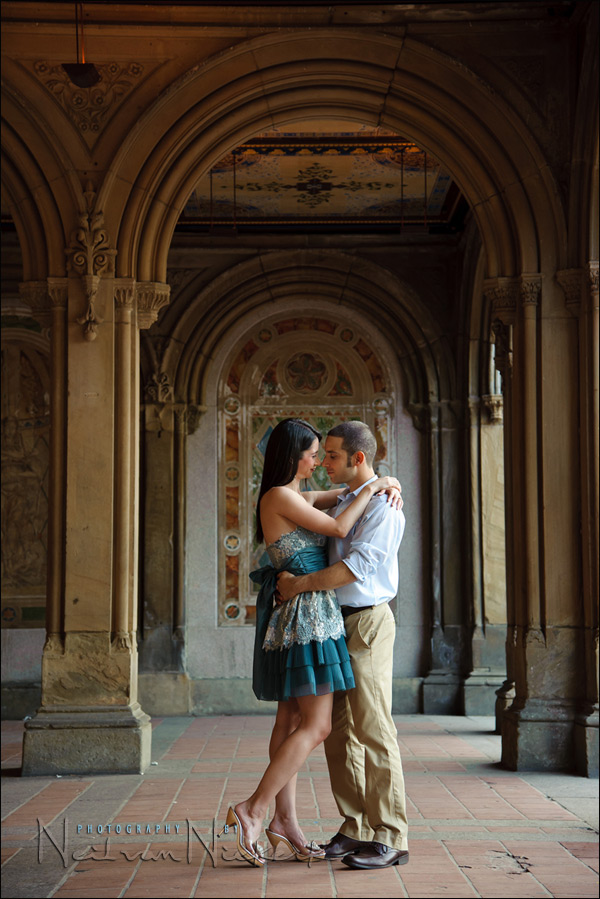 The photo above, is of a couple, Alli and Scott, whose New York photo session took place in Central Park, earlier this year. It is typical of how I use bounce flash to sweeten the contrast, and enhance the available light. I bounced the flash behind me into the large open area there. Enough light returned to brighten the shadows and make the photograph just that little bit more romantic.

B.) Under-exposing the ambient light, and letting TTL flash give correct exposure

With this next image, I bounced flash off the church wall. The church was large, and the ceiling high .. but by holding the camera in a vertical position, I could bounce my flash straight towards the church interior wall to my left. This of course created a large light source, and this spilled enough light onto the couple to give flattering light.

I purposely did not use an omnibounce / Stofen attachment, since I didn’t want flash to spill forward for the series of images I took here. I did NOT set my flash to 45` since this would not have been a correct angle to bounce at. 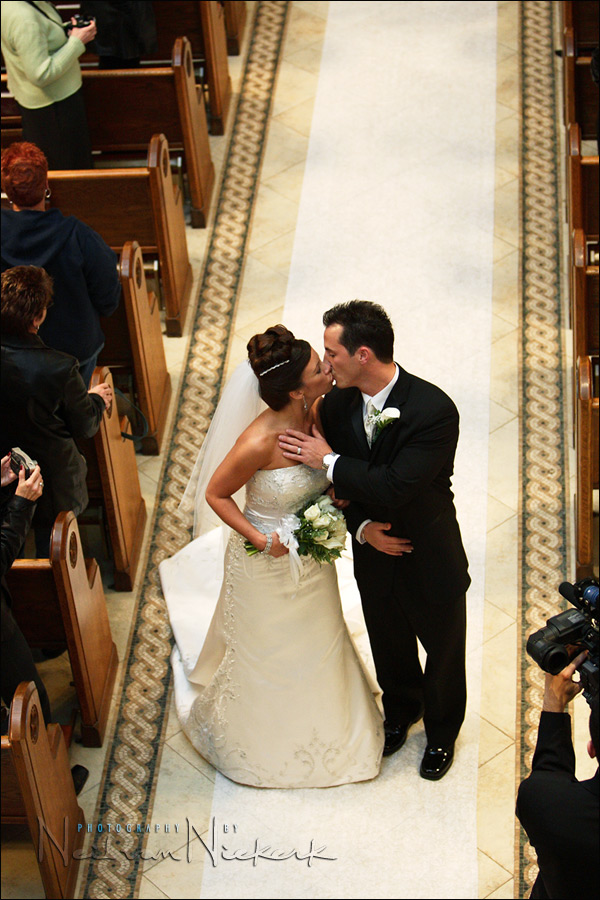 About the decision around the exposure metering and use of TTL flash:
I had figured out the basic ambient exposure before the bride and groom walked down the aisle. I did this by doing a few test shots of the backs of the guests towards the left-hand side of the photo. First without flash, and then with flash. This is how I arrived at a setting of 1/125 @ f2.8 @ 1000 ISO. When the bride and groom then walked down the aisle, I had my exposure settings down pat.

As the parents walked down the aisle, I had time to make a comparison shot without flash. (I did this specifically for presentation here).

So here are two shots in succession. The one with flash, and the one purely ambient light. The shot with flash had the WB slightly adjusted, the other is directly out of camera. Exposure settings remained the same, and I didn’t touch up exposure in raw either. 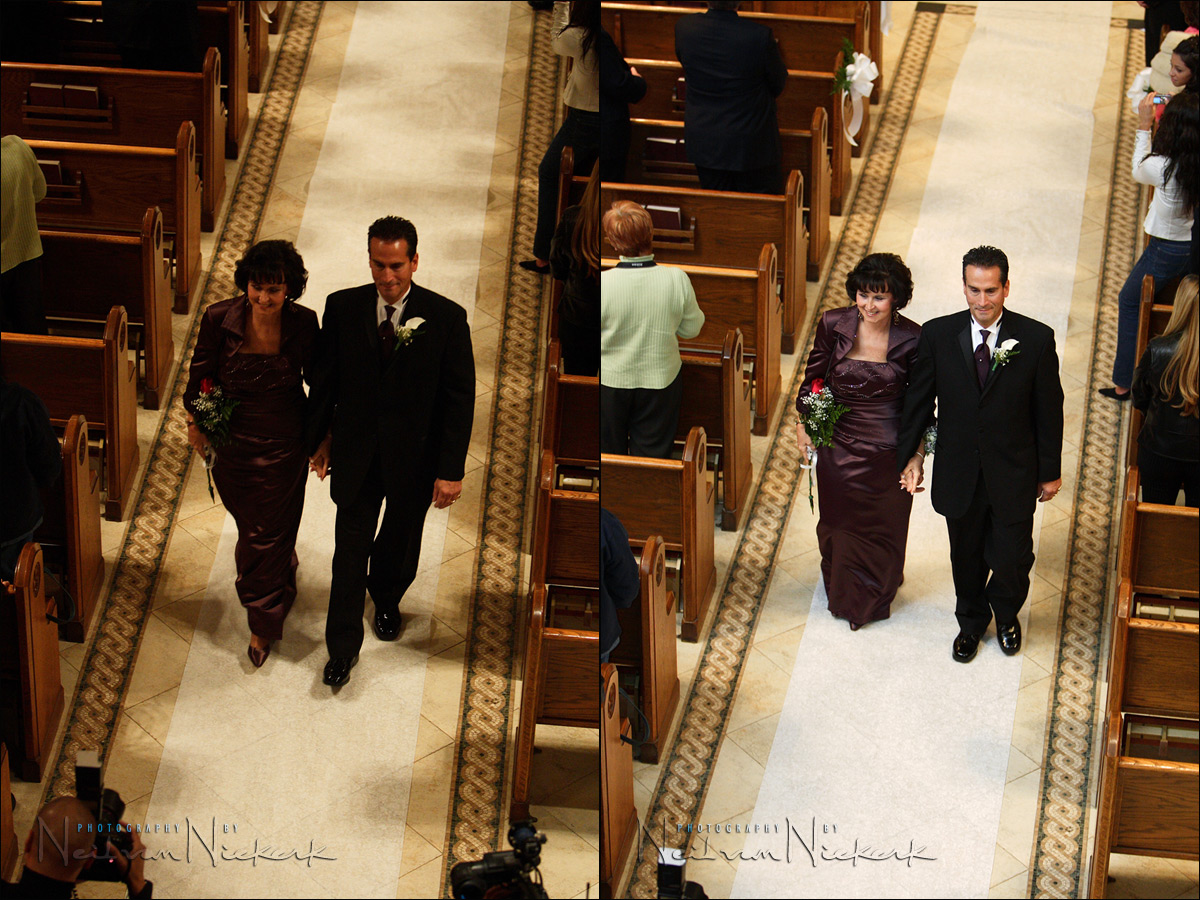 Note that the flash shot has no flash shadow. It looks natural, and a hell of a lot better than the ambient-only shot. By using flash, *I* controlled the light, and didn’t merely shrug my shoulders and complain that the ambient light wasn’t ideal.

To improve exposure for the ambient-only shot, I could’ve set a slower shutter speed, and risked blur as they move and from camera shake. Or I could’ve bumped up my iso to get the higher shutter speed, but then have to deal with increased grain. Also, the ambient light isn’t even. With flash I had much more control over how the final image looks. 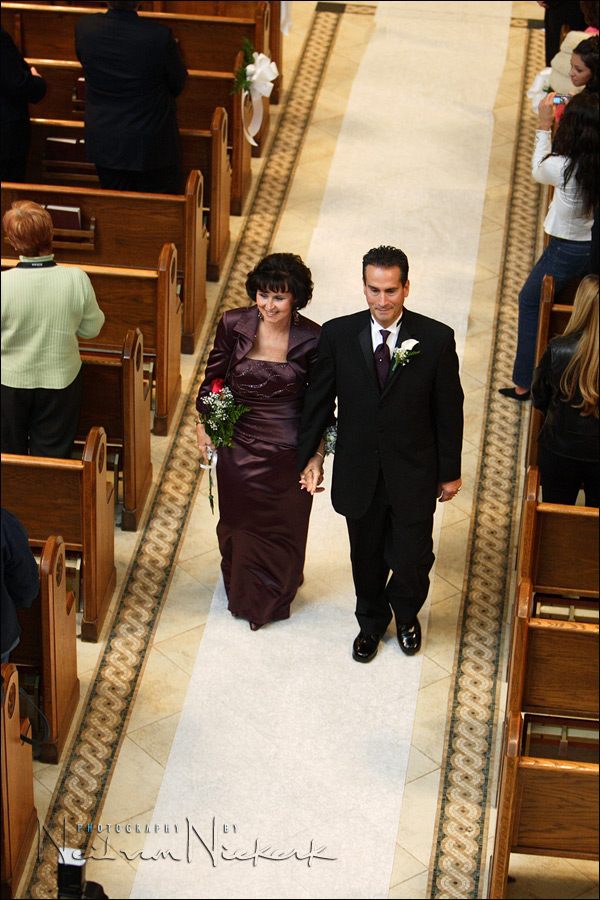 Adding the fill-flash, enhanced the image – we don’t just have to rely on the available light.

next section:  Dragging the shutter