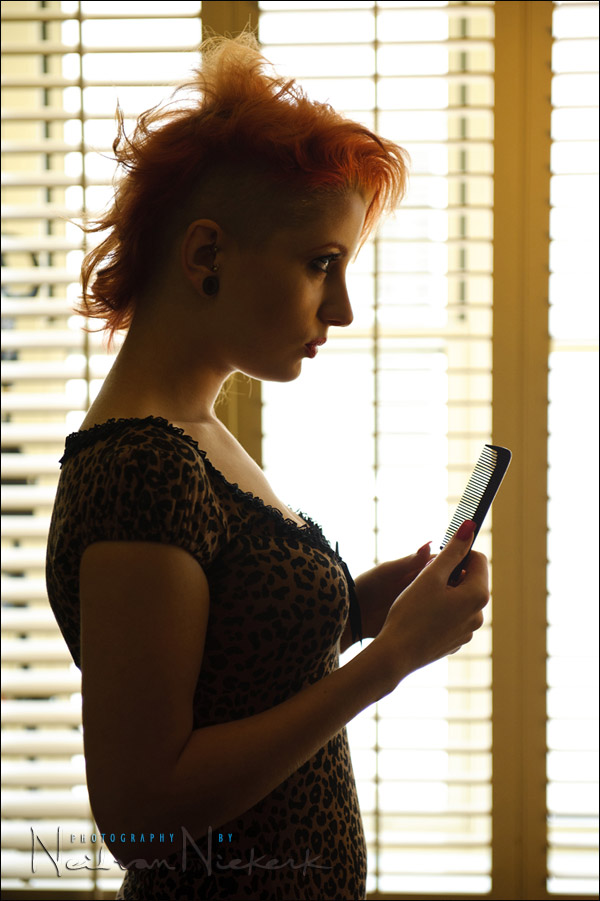 Continuing the photo session with Ulorin, we worked inside the hotel room for the next part. The photo above is a candid shot of Ulorin fixing her hair between changes in clothing. Ulorin’s next outfit shown in this article, was more revealing than the previous outfits during the photo session. (Just a heads-up for the Tangents readers who are surfing from their workplace.)

Photographing inside the room, I initially tried to work with just the window-light, but hit a small snag. The indirect light through the window kept changing on me as clouds moved in and out. Instead of changing my settings continually to match the light, I decided to revert to using flash to mimic the window light. This would give me consistent light. 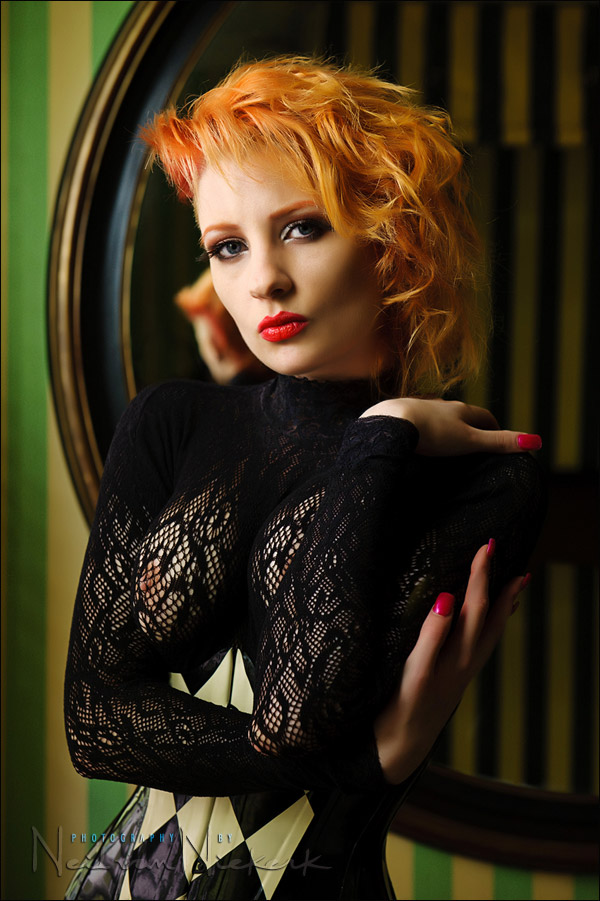 This is the quality of light that I was after … soft directional light that still added a sense of drama. The light shown here is mostly flash, with a bit of ambient light. It took a few adjustments though to get to this point where I really liked the look. 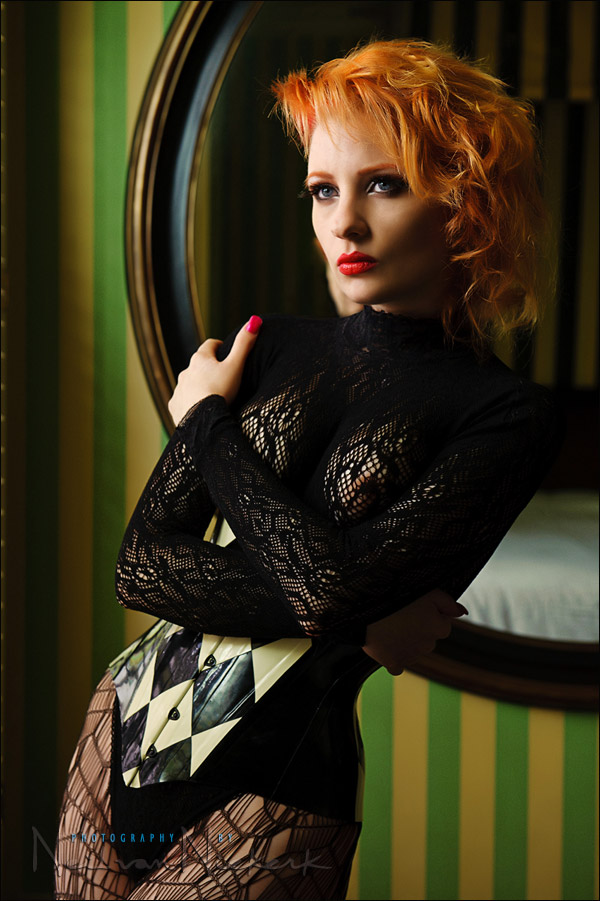 The slight change in contrast that you see in the light on her face, is because Ulorin shifted in position relative to the light as she changed her pose. (I edited out the white bedsheets in the top image to see if the image was improved without the distraction of the white bed sheets.)
This is where we started. In these test shots you can see the table and clutter in the background. This is before we moved everything out of the way. What is also immediately noticeable is that the exposures here are different, even though my camera settings were the same:
1/200 @ f4 @ 650 ISO 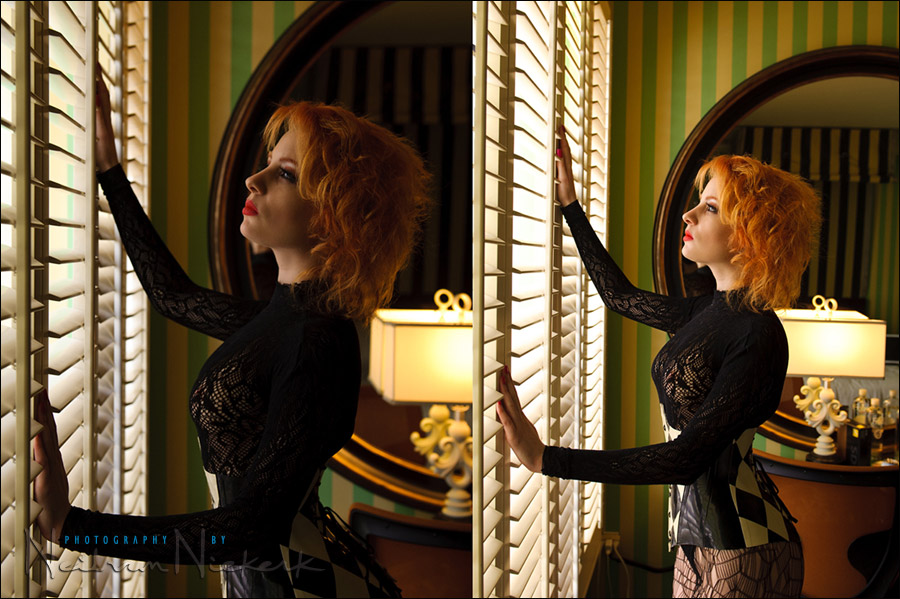 The available light looked good (as in this image below), but it was too inconsistent. I’d rather be concentrating on the photography, than have the rhythm of the photo session be broken by constant adjustment of settings. 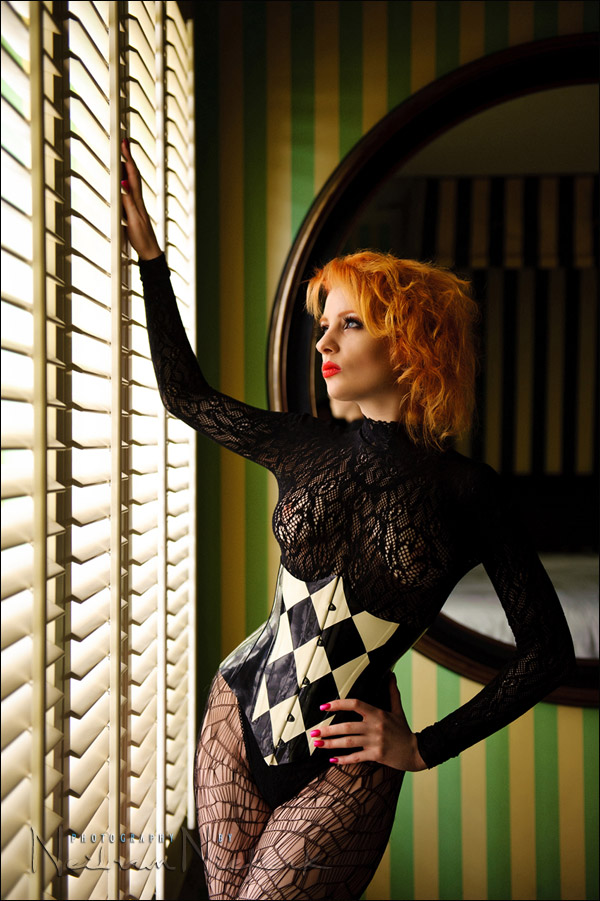 1/250 @ f3.2 @ 800 ISO .. available light.
I then thought I could mimic the window light by placing an off-camera flash in the window. The flash pointed outwards and up, bouncing off the glass of the window. I had the flash-head zoomed wide. 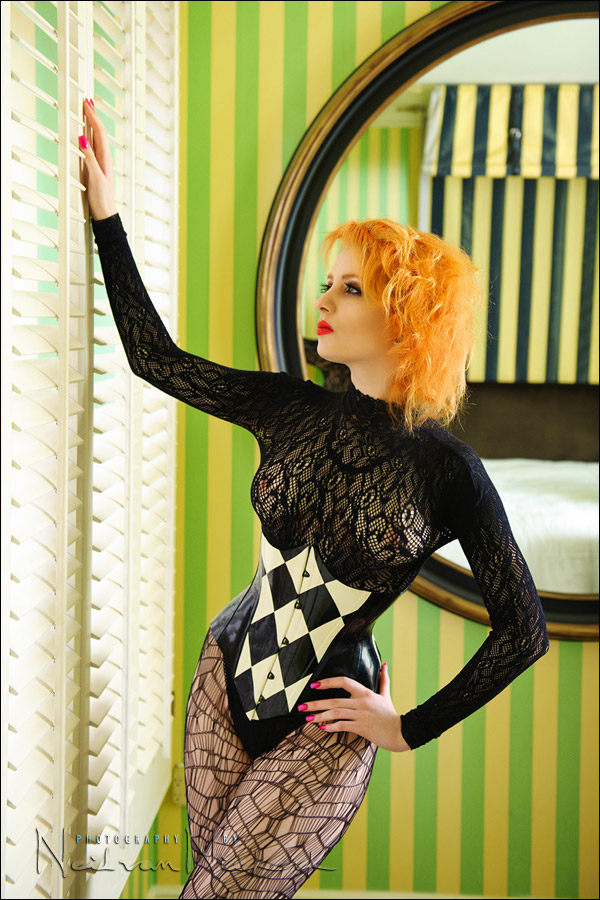 The result was a flood of light into the room. I guess this would’ve looked like window light on another sunnier day. And with the room not facing another hotel across the narrow road. It just didn’t look like I wanted. 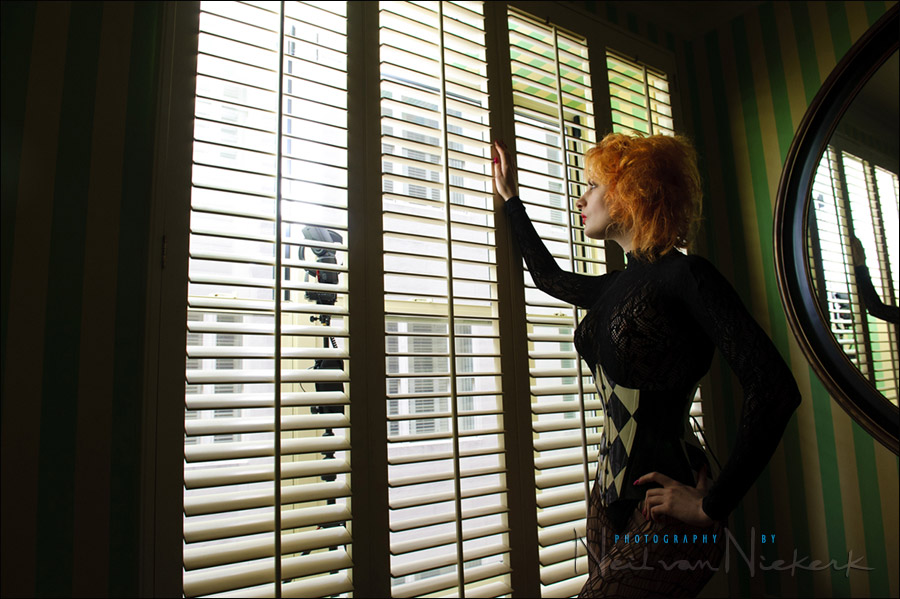 And now the direction of the light is exactly what I was after. I had zoomed the flash-head to a tighter angle to make the swathe of light less broad. I wanted the light to accentuate Ulorin’s face. And here is the result … 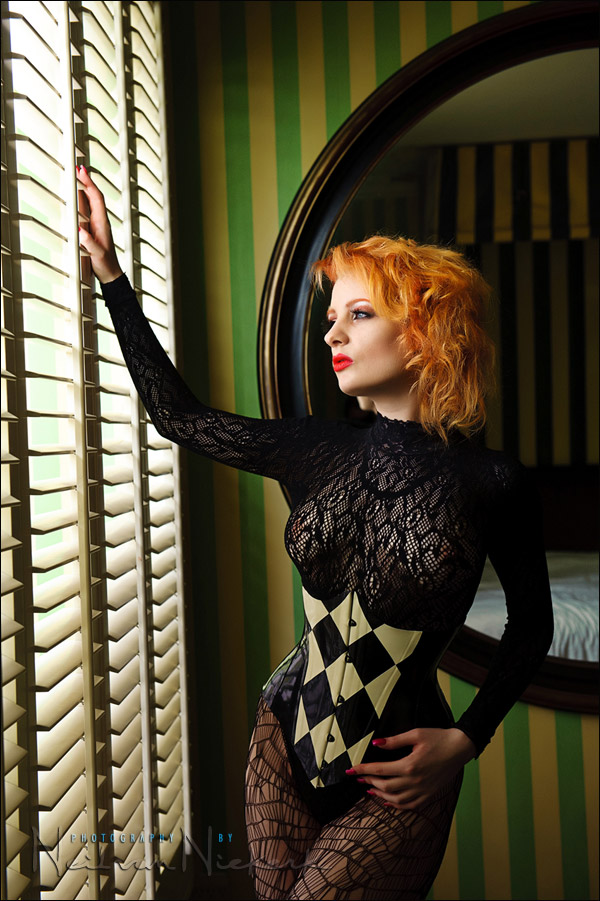 And in case anyone needs convincing that bouncing the flash off the glass had any effect, here is the shot without the flash. 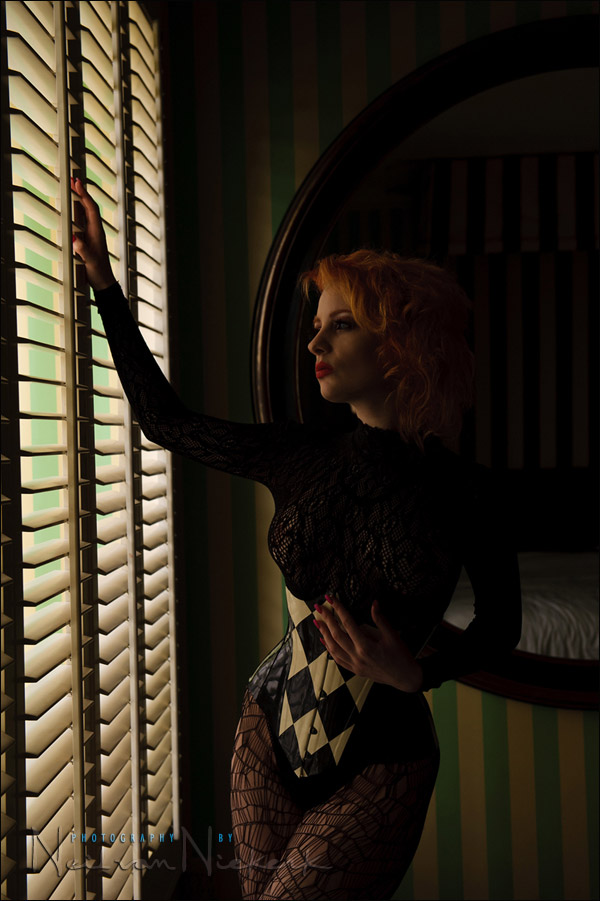 The manual off-camera flash was controlled in the same way as for the photo session with Ulorin in the red latex outfit. The speedlight was controlled via a PocketWizard FlexTT5 on which the flash was mounted. The output of this flash could be controlled as manual flash via the FlexTT5 and AC3 ZoneController on the camera. 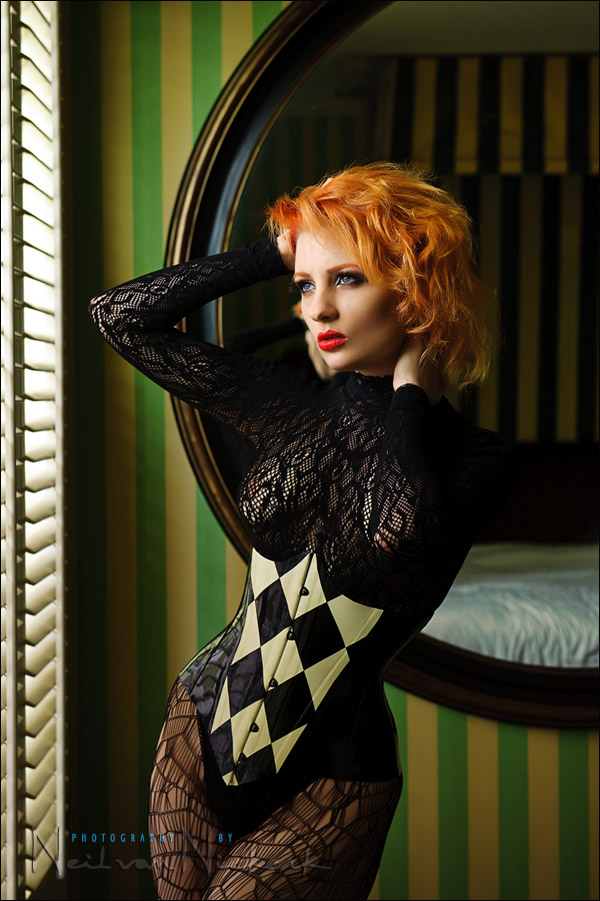 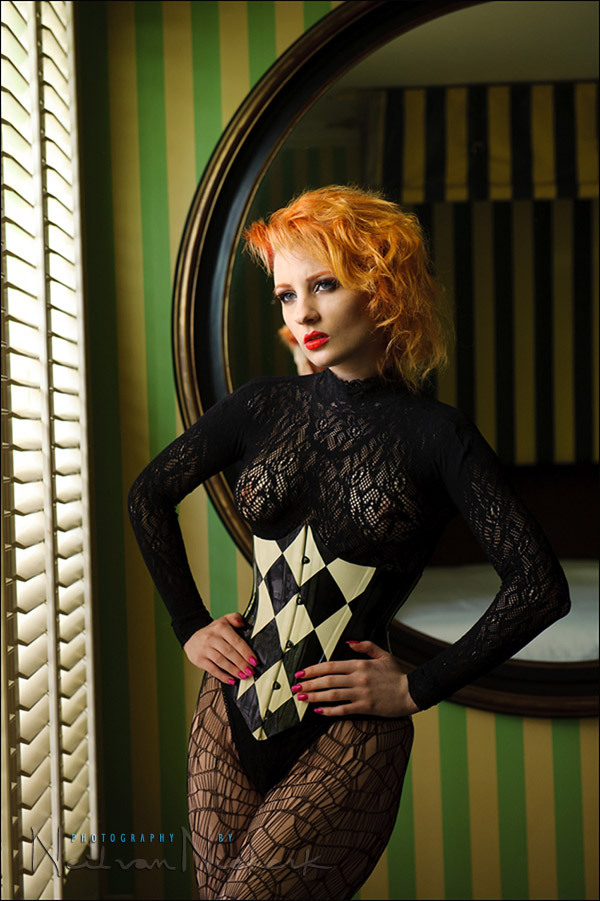 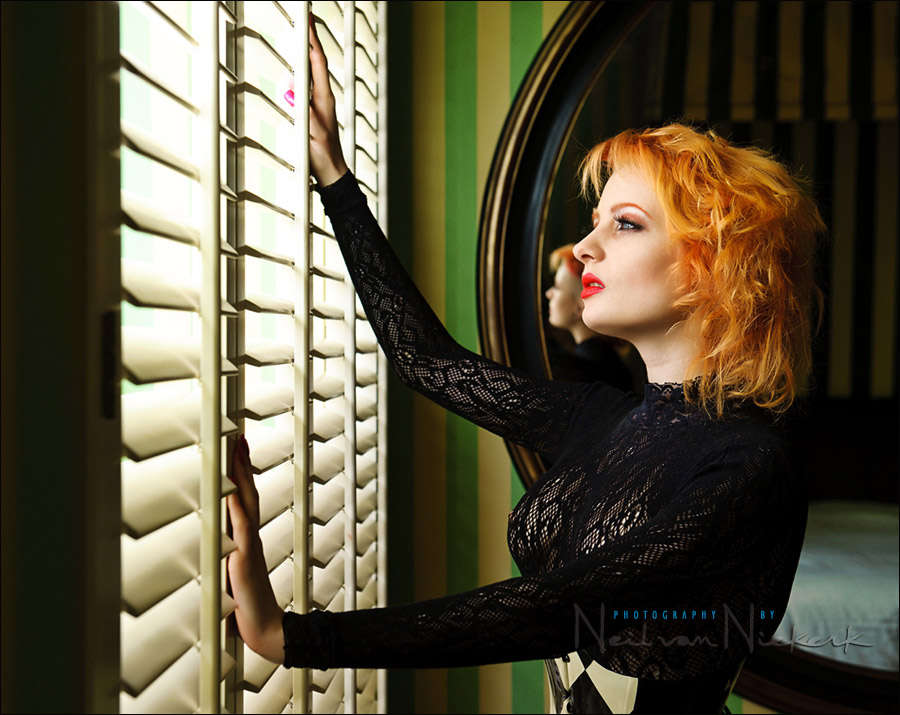