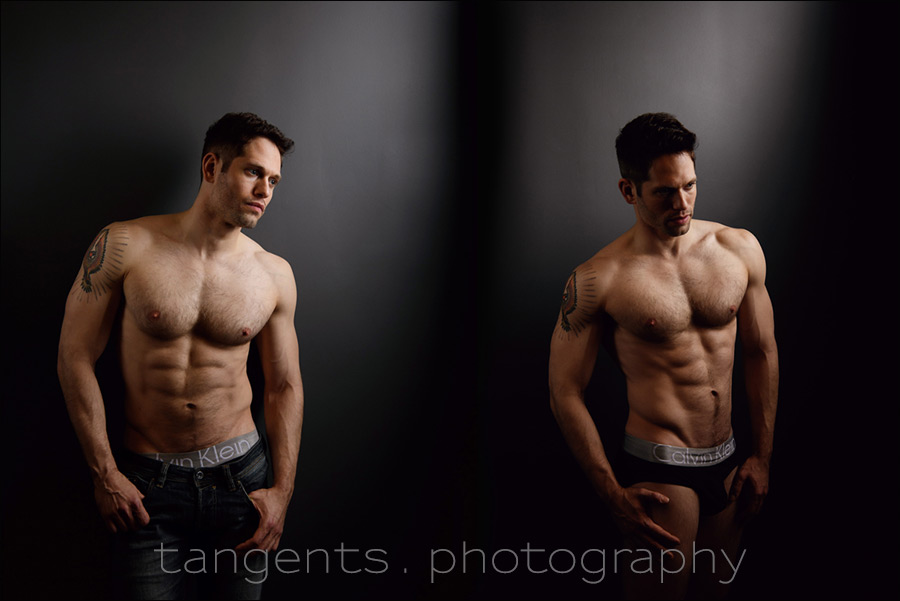 The motive behind this photo session with Nick Mathews, is explained in the intro of the behind-the-scenes video clip of the photo session. One subject, one studio, two photographers and two different styles. We shot this in Cate’s studio – she used available light, and I ended up using two Profoto B1 flashes (affiliate), and gridded stripboxes to control the light. The video clip shows some of how we directed Nick during the shoot, and as a professional model and actor, he was supremely easy to work with.

With this article, I’d like to touch on each of the different sections of the shoot, coming up with a few different looks. There is still a sequence of sorts in how the photo session progressed. With relatively limited time, and a model who was becoming slightly fatigued after the long day, I had to work with that progression in mind and not spend too much time setting up the lights. I wanted to work fast, and still get some variety in the photos that would complement his existing portfolio with new images. 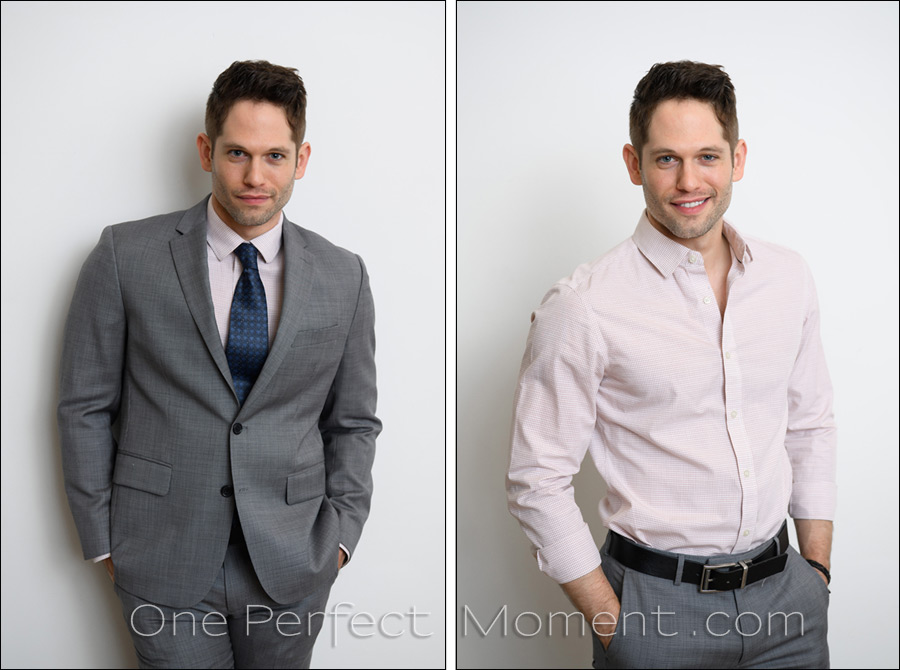 I started off the photo session with a series of headshots for Nick, as requested by his agency. Not boudoir at all, but this was an easy ice-breaker – straight-up headshots.

This is explained further in the article, Easy lighting setup for headshot photography. 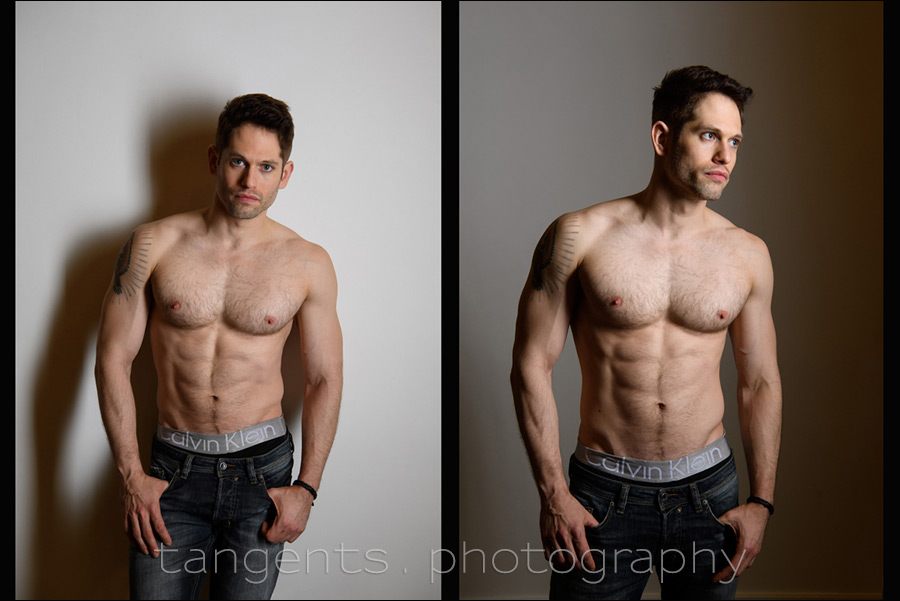 With Nick going shirtless, the soft flattering light we had with the large light source of the bounce flash, would not have shown his physique to the best. Therefore I went with one of my go-to light modifiers when working in the studio – the massive Profoto RFi 1’×6’ softbox (B&H / Amazon), with that egg-crate grid on it. I’ve shown in previous articles just how effective this light modifier is in creating dramatic light that still has a soft edge. For example: Chiaroscuro lighting  (model: Frankie).

The shadow in the image on the left will give you a good idea where the sofbox was placed – the center of the softbox was above eye-level, and about 45 degrees of to the side. With the lighting coming from the side, we get to see the definition of Nick’s body without even really doing anything crazy with the lighting. That simply is how directional light from a smaller or narrower light source works. With these examples, I only used the one flash / light source since the lighting wasn’t too contrasty yet. 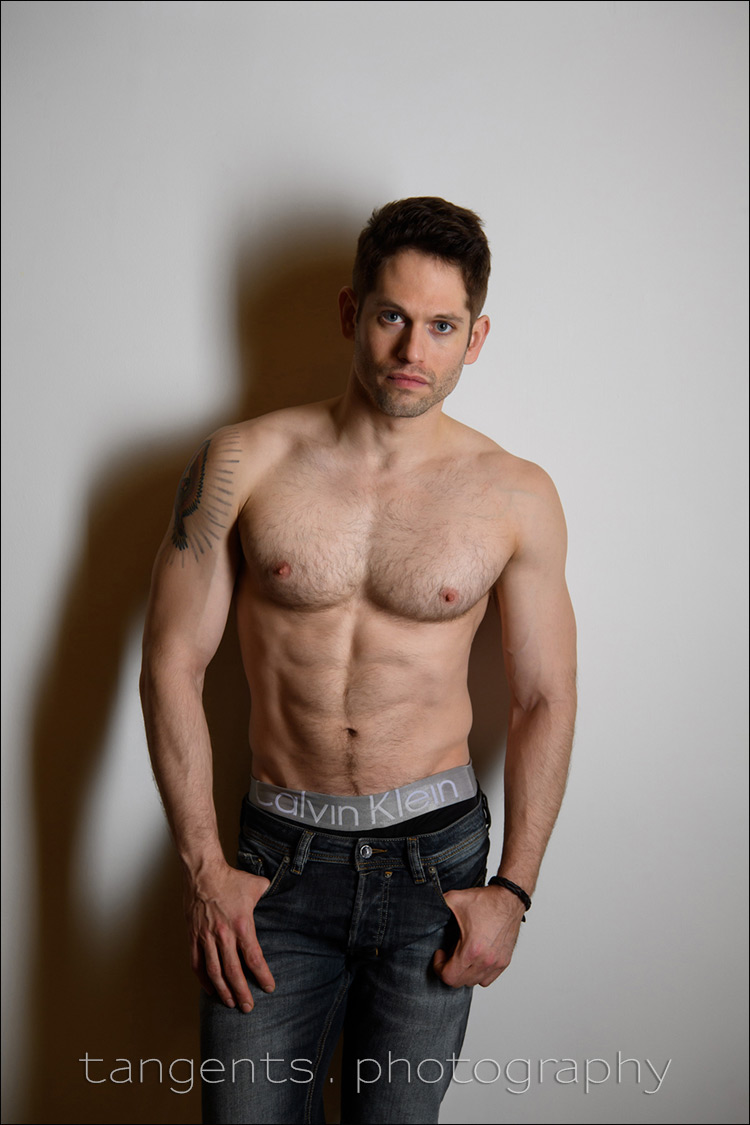 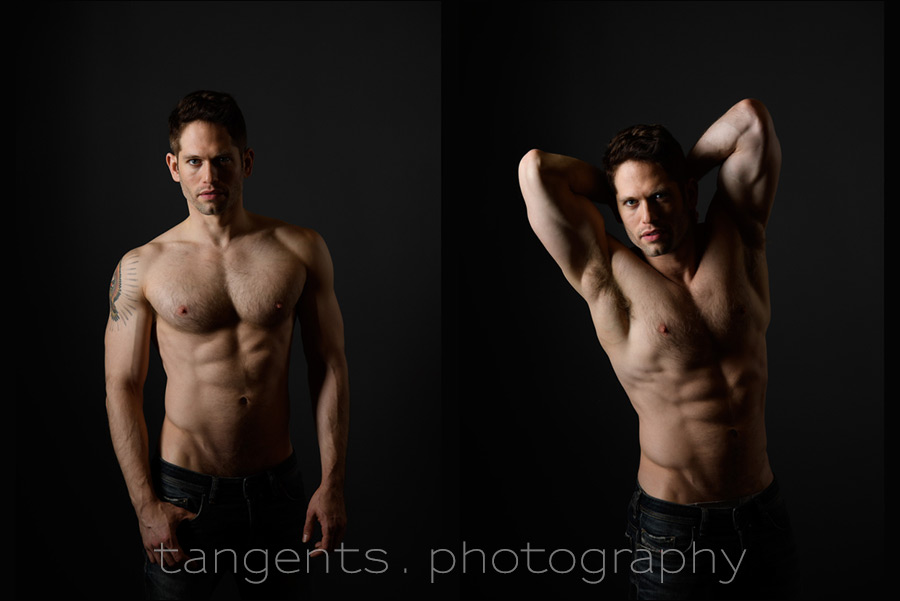 Working against the dark-grey wall, I used the gridded Profoto RFi 1’×6’ softbox (B&H / Amazon) again. Working with the light at a greater angle to Nick, the light became more contrasty. In addition to the stripbox being more to the side of me, I slightly rotated around its axis to create greater light fall-off to the lower part of his body.

With this amount of contrast, we need to bring in a touch of fill-light from the other side to avoid the photos looking too stark. For this I added the second Profoto B1 flash to camera-right at a low power setting. This second flash had the smaller (gridded) Profoto RFi 1’×3’ softbox  (B&H / Amazon).

The lighting setup is similar to that shown in the next section, but with the larger and smaller light stripboxes swapped around. 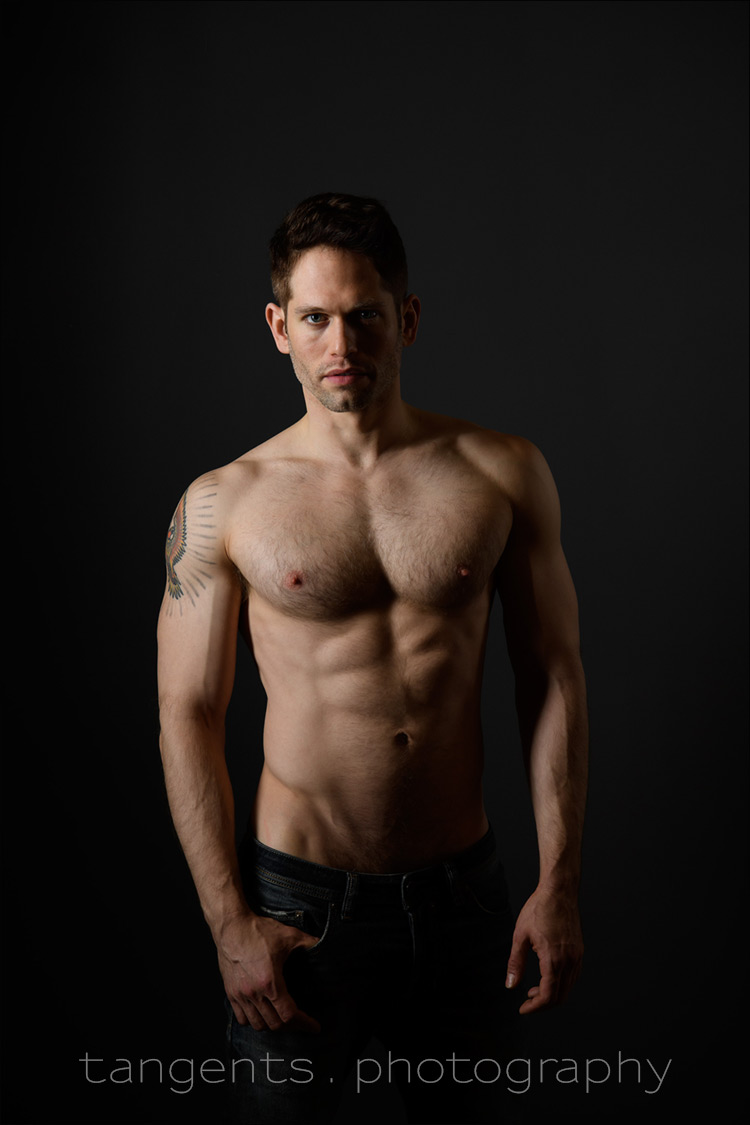 One of the tricks I love doing with the tall Profoto 1×6 stripbox, is push the one end close up to the wall, to create what looks like a spot-light shining down on my subject. These three articles will also help explain it.

Since the egg-crate grid at each end of the tall stripbox emits only a much smaller portion of the light, it doesn’t blow out the colors of the wall where the stripbox is positioned!  And with the stripbox pointing down, the light is slightly top-heavy … but because it is tall and the center of the stripbox is still above eye-level, the light looks good. Really good!

This pull-back shot will help explain how the lights and softboxes were positioned.  The smaller Profoto RFi 1’×3’ softbox  (affiliate) is on camera-left to add some fill-light. The taller Profoto RFi 1’×6’ softbox (affiliate), is the main light. Notice the light “shining from above” where the top-end of the stripbox is much closer to the wall. I love this effect. 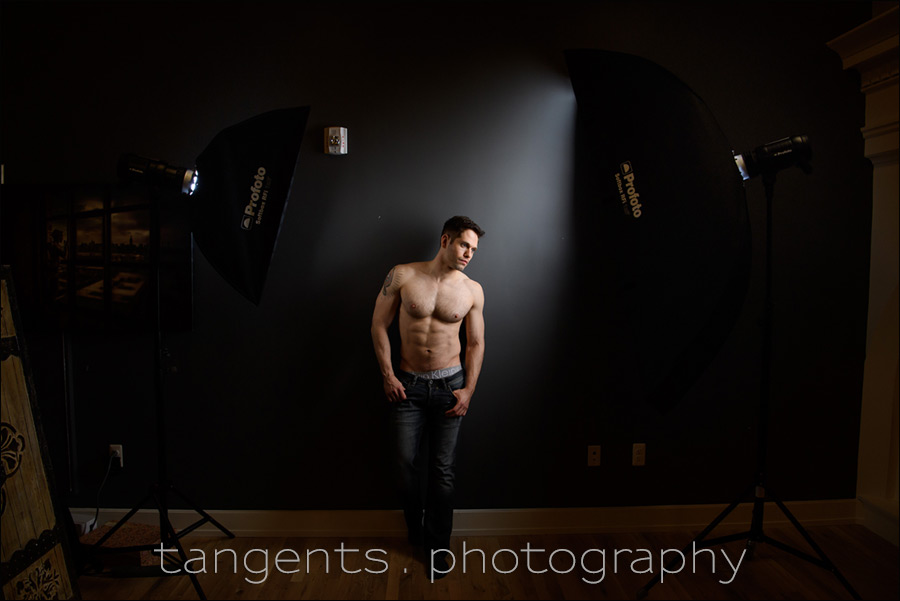 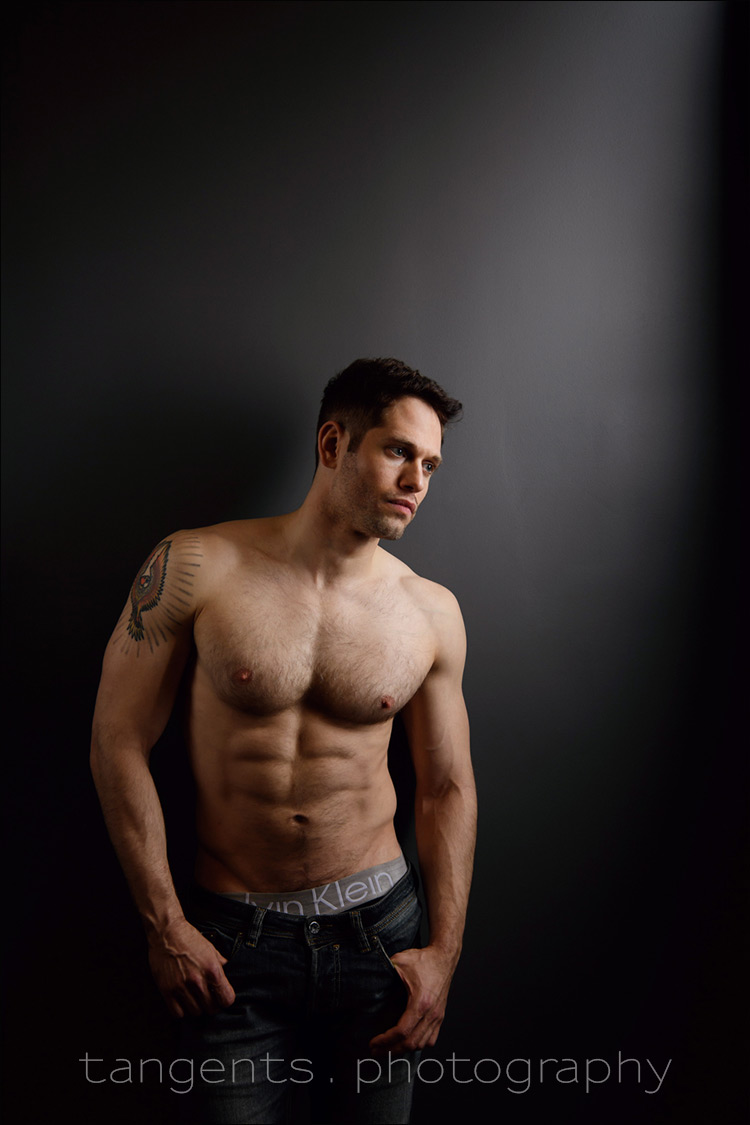 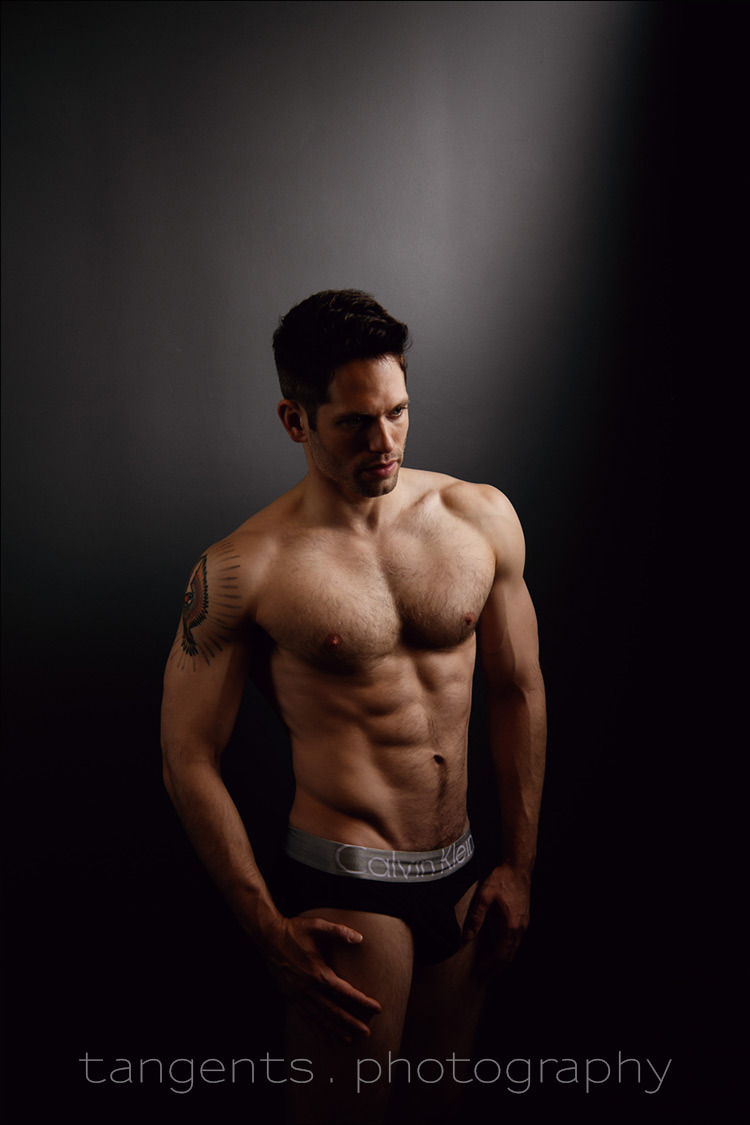 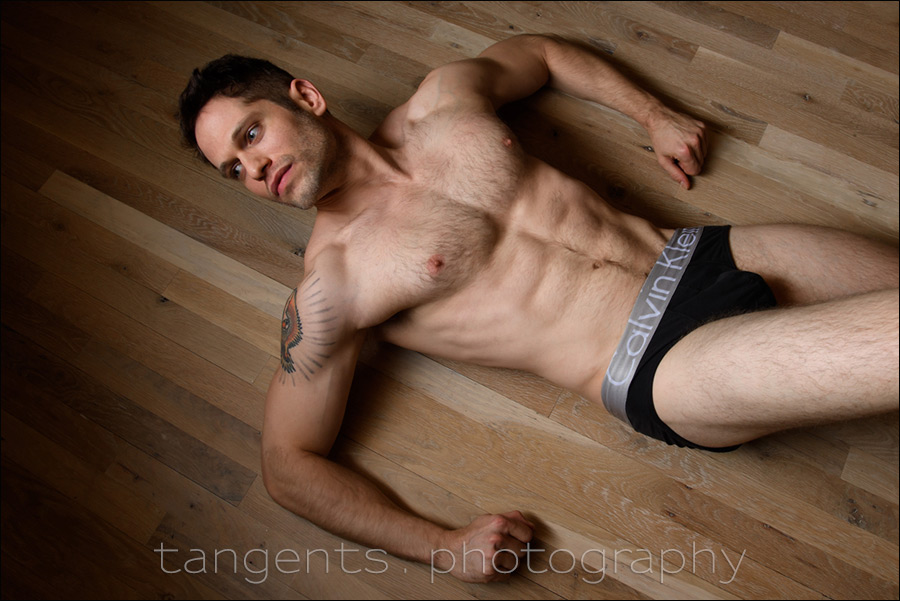 The texture of the studio floor just asked to be used with a few portraits! The color of the wood and the texture definitely complemented the images of Nick stretched on the floor. For a part of this sequence, I asked Nick to raise his body up by his arms. This caused his muscles to flex … and this also created a certain tension in the photos.

Again, just the single gridded Profoto RFi 1’×6’ softbox (affiliate), as the light source. Notice in the pull-back shot that it was positioned “opposite” from me. This way the light skims Nick’s body … instead of how we would’ve had flat lighting if the light source was from the some side as I was shooting. Oh, and to get the elevated angle, I was on the staircase which you can see in the accompanying video clip. 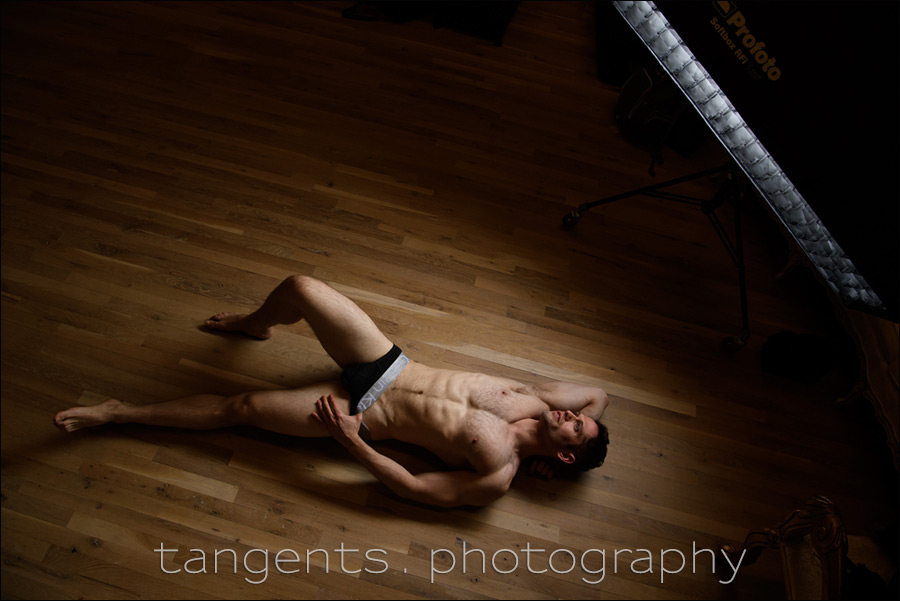 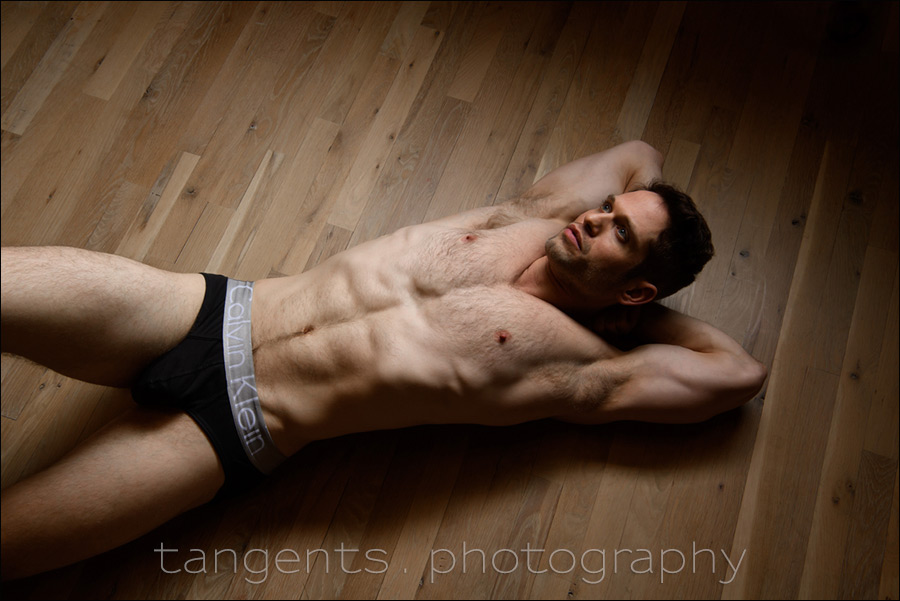 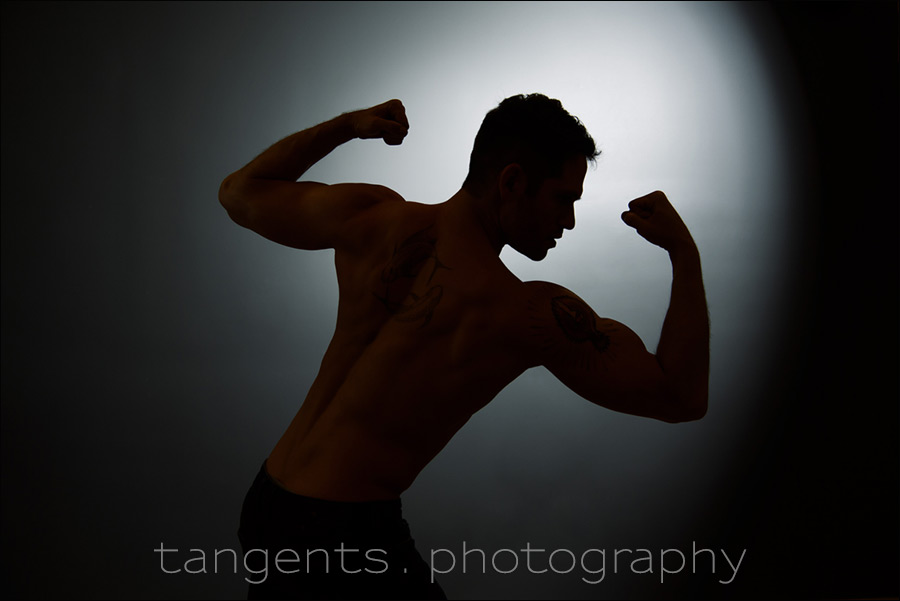 In chatting to Nick, he said he would love to have some kind of silhouette shot. So we quickly set this up with the Profoto B1 and the Profoto Magnum reflector (affiliate), blasting light at an angle on the dark-grey wall. The bit of color you see there is from a cross-processing effect from the set of Nik filters which you can download for free from Google. You need the Nik filters!

Nick then wanted more detail of his back, so I brought in the smaller and rotated it closer to me until Nick was happy with the results. Again, dead easy to set up. Not quite boudoir perhaps, and closer to Fitness Photography as a genre, but the final results look really good. 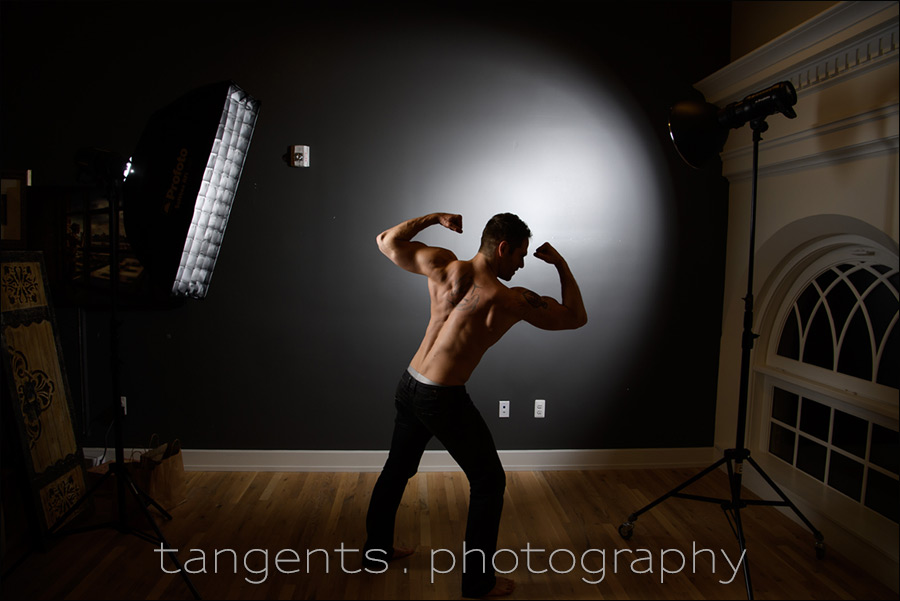 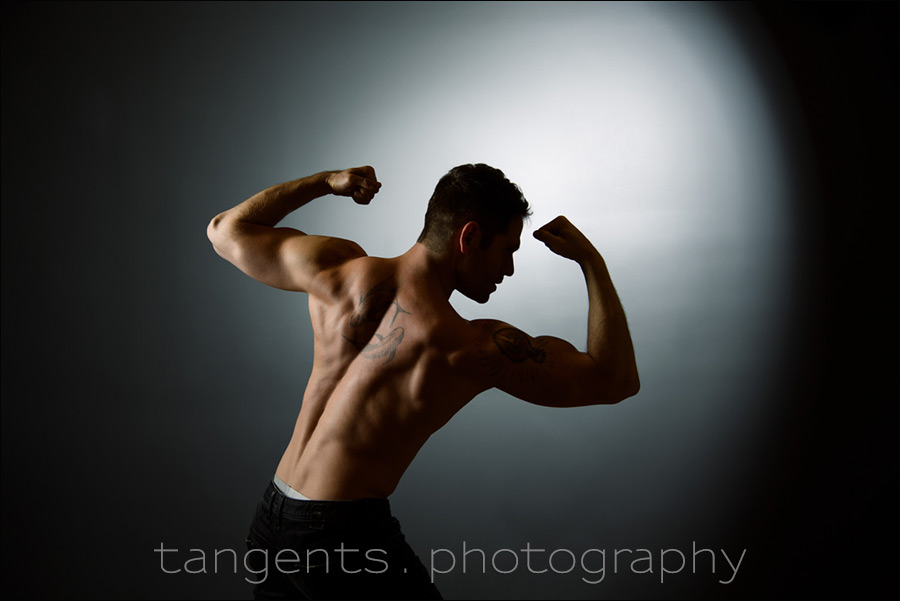 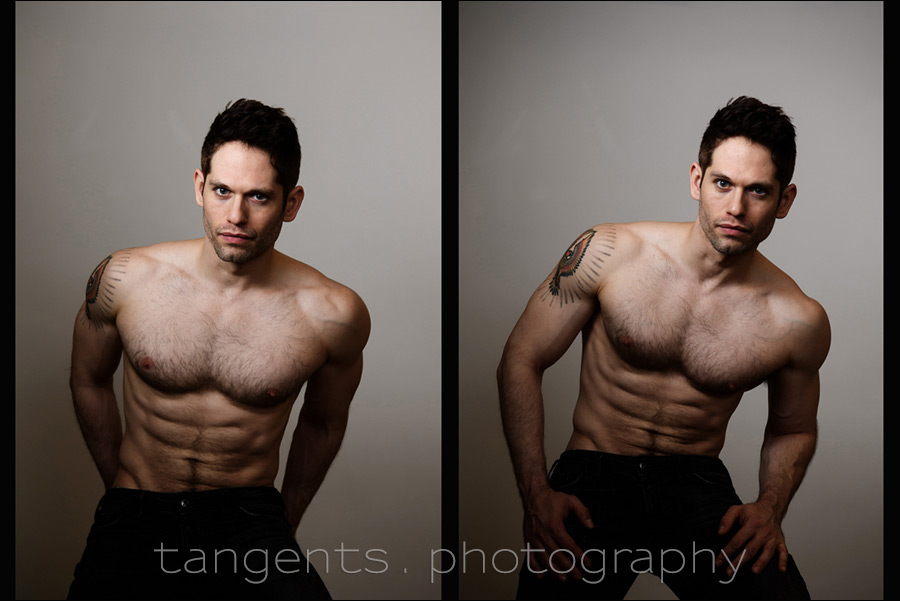 Having run out of time and energy, I wanted to pull off one last setup quickly. With Nick half-leaning on a chair, I wanted simple but dramatic lighting.

I enhanced these with a simple Photoshop trick, adding a Gradient Map on a layer, which was then set to Soft-Light blending mode. You can change the effect by changing the opacity. This gave the gritty look that I wanted here. With Nick’s intense stare, dramatic light, adding that bit of a grittiness to the photos made them really pop for me. 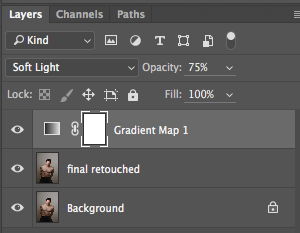 Once again, the lighting setup was fairly simple – the main light was a Profoto B1 with a gridded Profoto RFi 1’×3’ softbox (affiliate). I kept this horizontally to reduce the amount of light falling on the lower part of Nick’s body. This created a mild spot-light effect on his face. Then I added a touch of fill-light by bouncing the second Profoto B1 behind me, with the Magnum Reflector to control the direction of the bounce flash. 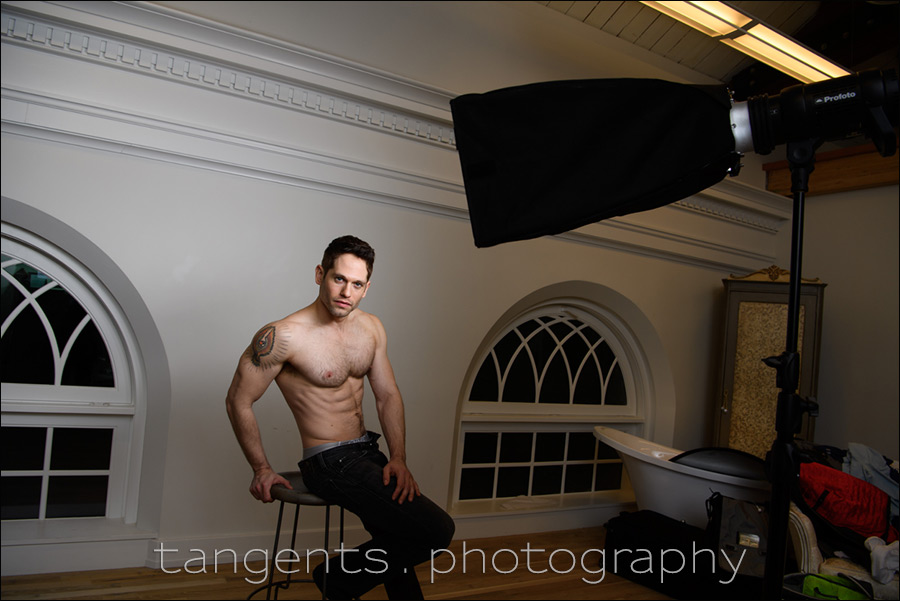 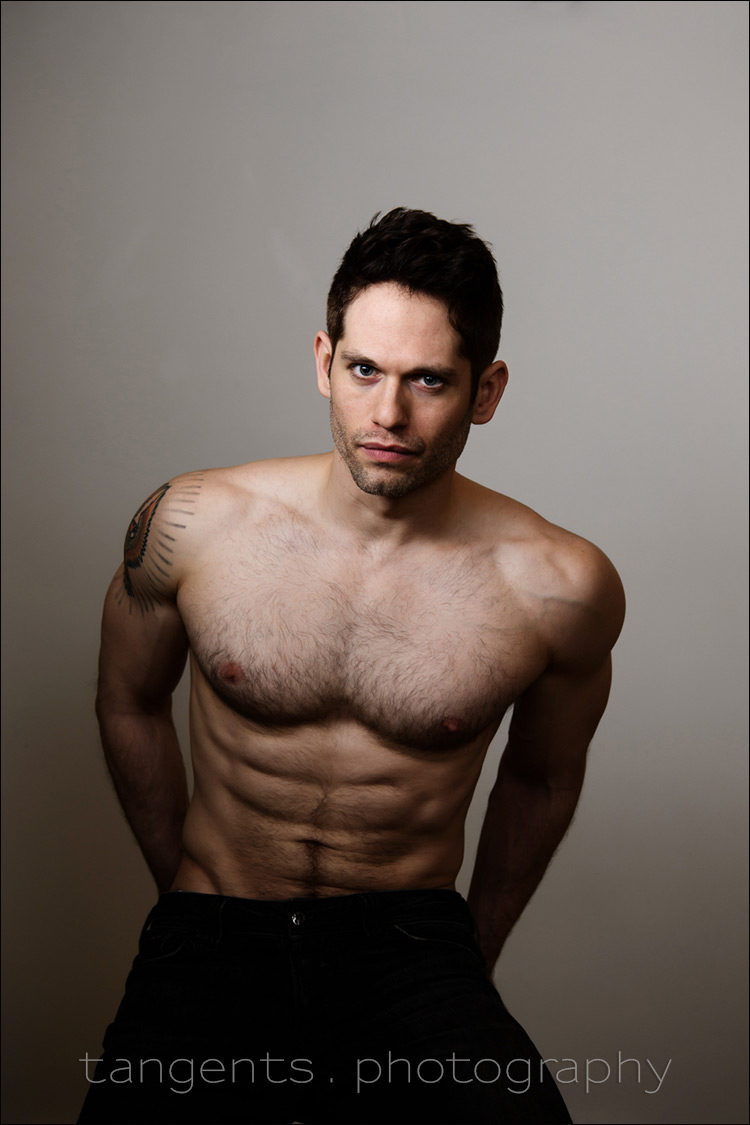 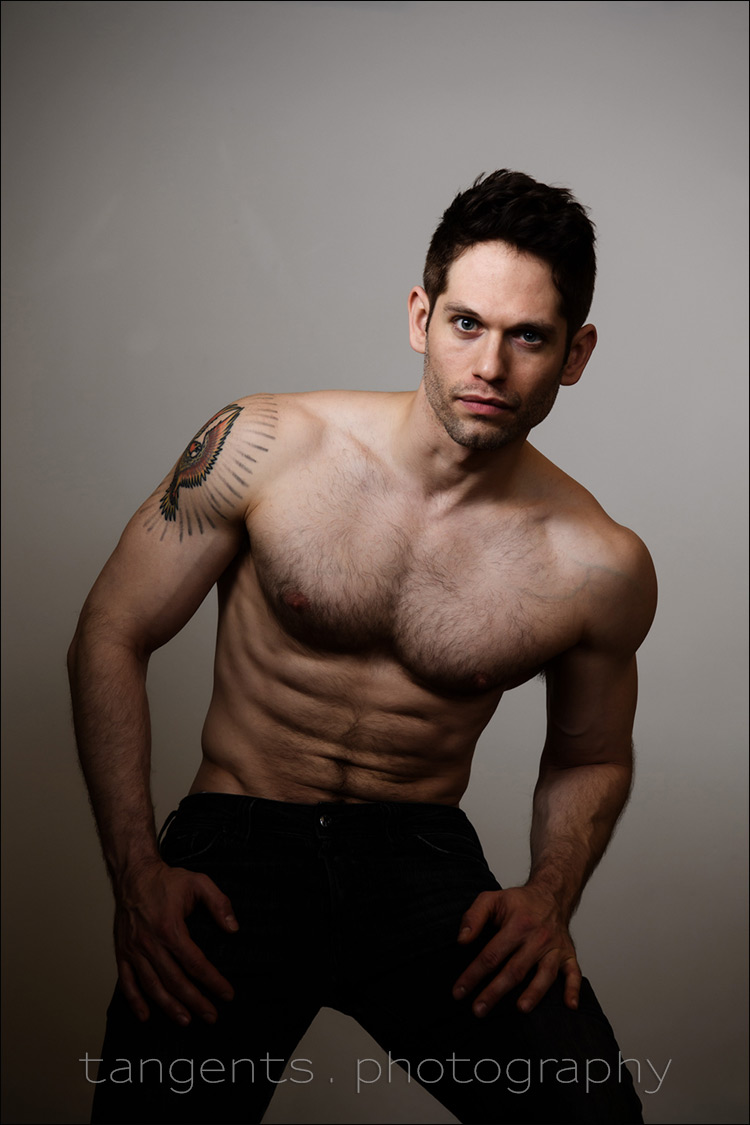 Hopefully this article and the accompanying video clip will give some insight in the the way the photo shoot flowed, and how I moved from one setup to another, trying out ideas.