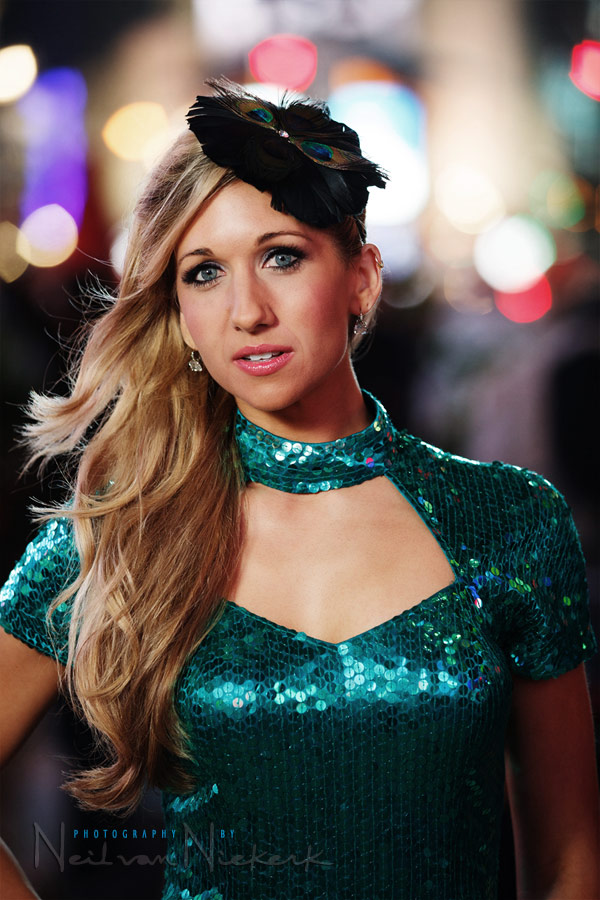 Photo session with a model in New York

With the 15 main images selected to show here, I wanted to show some of the thought-process during the shoot, as well as the influence post-processing has on the final result.

I didn’t need a back-light here, since the photo was taken in Times Square, and the place is usually awash with light. So it was a matter of finding an out-of-focus background that was complimentary to the glitzy evening dress.  Doing portraits down in the crowd, there were a lot of people milling around. Wide apertures, shooting a lot, and being purposeful about my composition, gave me clean backgrounds in the images I chose from this part of the session.

The post-processing was as described in the article on Photoshop tips – retouching for portraits. However, the image’s saturation was too much, so I changed the look of the image further with a Gradient Map Adjustment layer in Photoshop. A further adjustment layer to pull down the Saturation helped too. 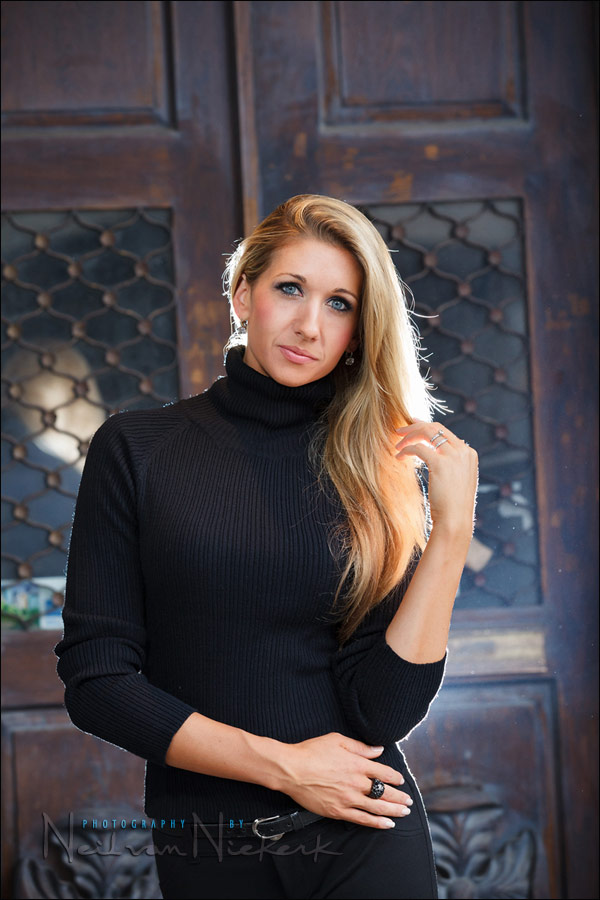 A photo from the start of the session – still trying to find a rhythm. As you can see, I over-did the backlighting a bit. (It was a flash on a light-stand behind Sarah.) 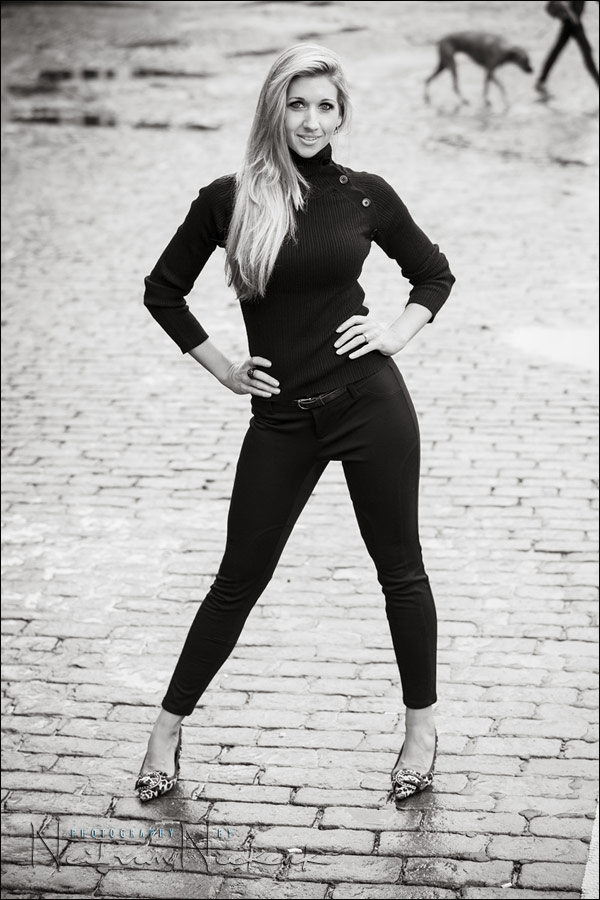 Standing on a chair, to get an elevated view, I tried to eliminate distracting background elements such as cars and buildings. I wanted the receding repetitive pattern of the brick-road as a background. But with this one image, someone walked by with a dog … and for me, the B&W image just works. The black outfit also worked with the monochrome treatment. 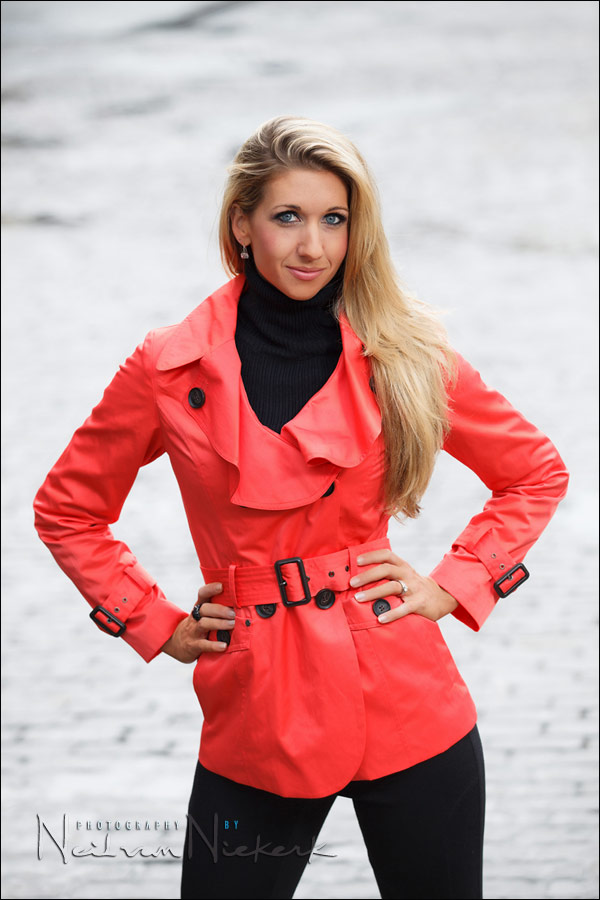 The boldly colorful opposite of the B&W image above. 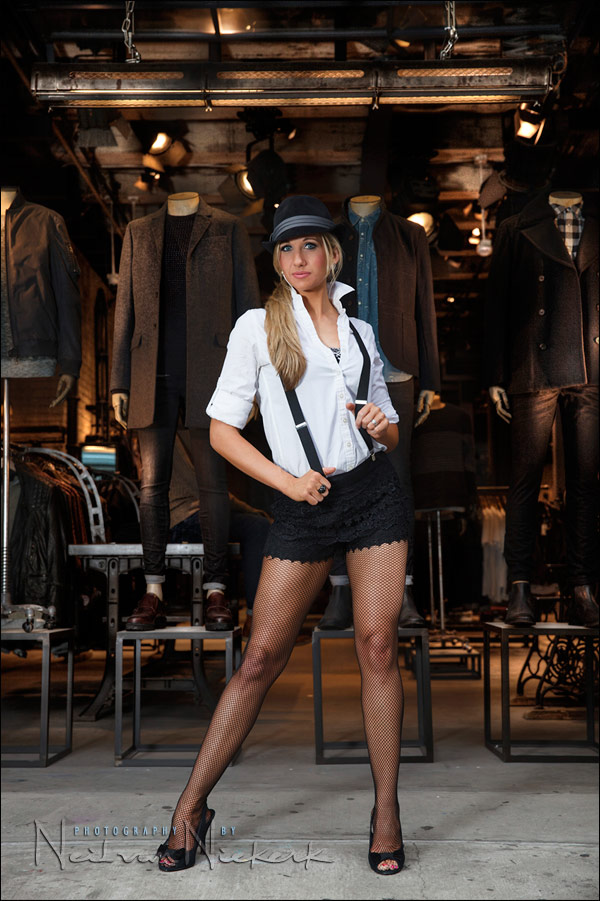 With this image, I changed the post-processing up a bit. The basic start to most of my portrait retouching, is the use of two Photoshop filters – Shine Off and Portraiture. This is described in detail in the article, Photoshop tips – retouching for portraits. That version is shown below.

The final image (shown above), had another layer added to it though. This additional layer was selectively brushed in for parts of the background, as a Soft-Light layer. What makes it different is that it was a tone-mapped version (done via Photomatix). This brought in a semi-HDR effect on parts of the background. 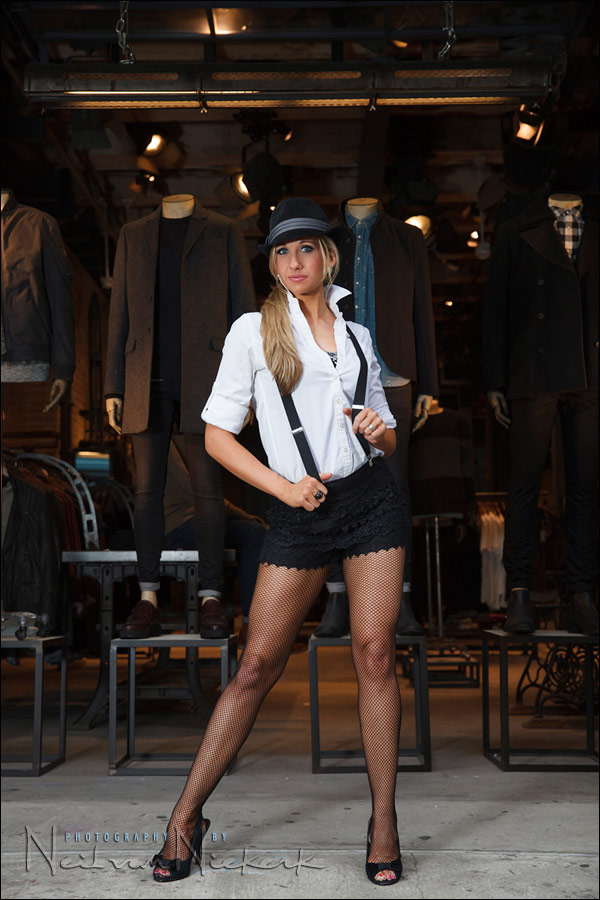 The test shot without flash: 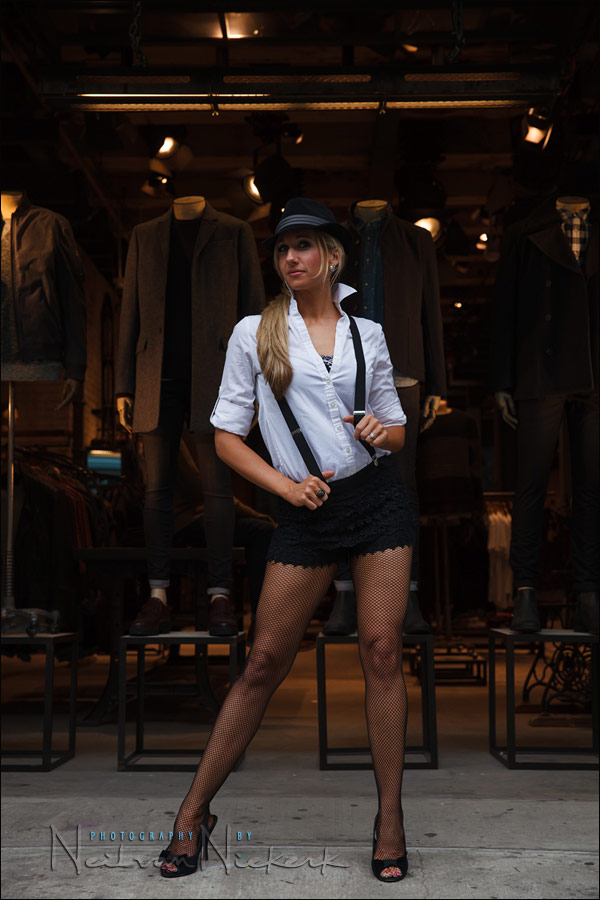 The pull-back shot to show the position of the light. I had to instruct my assistant to hold the softbox noticeably lower than I normally would, because I needed to get some light in under the brim of Sarah’s hat. 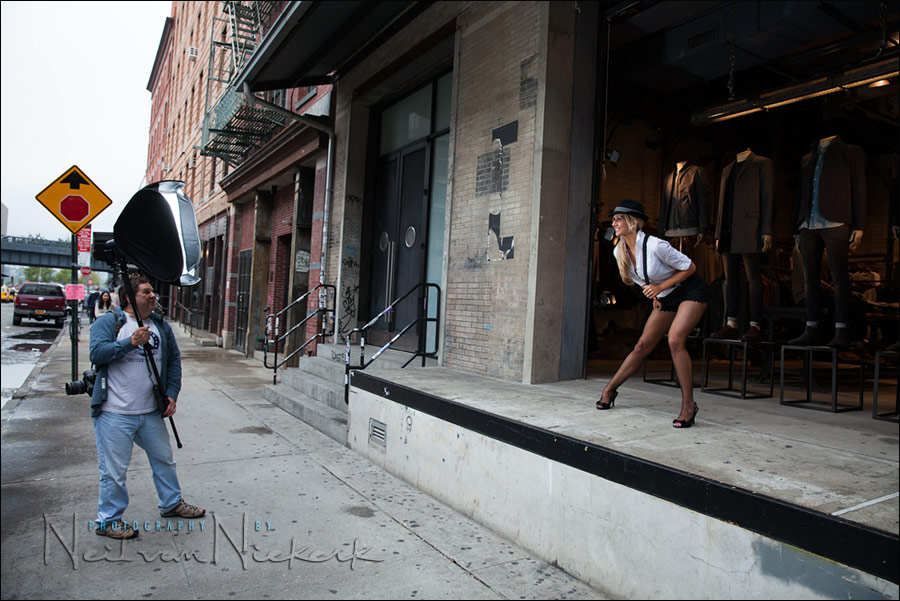 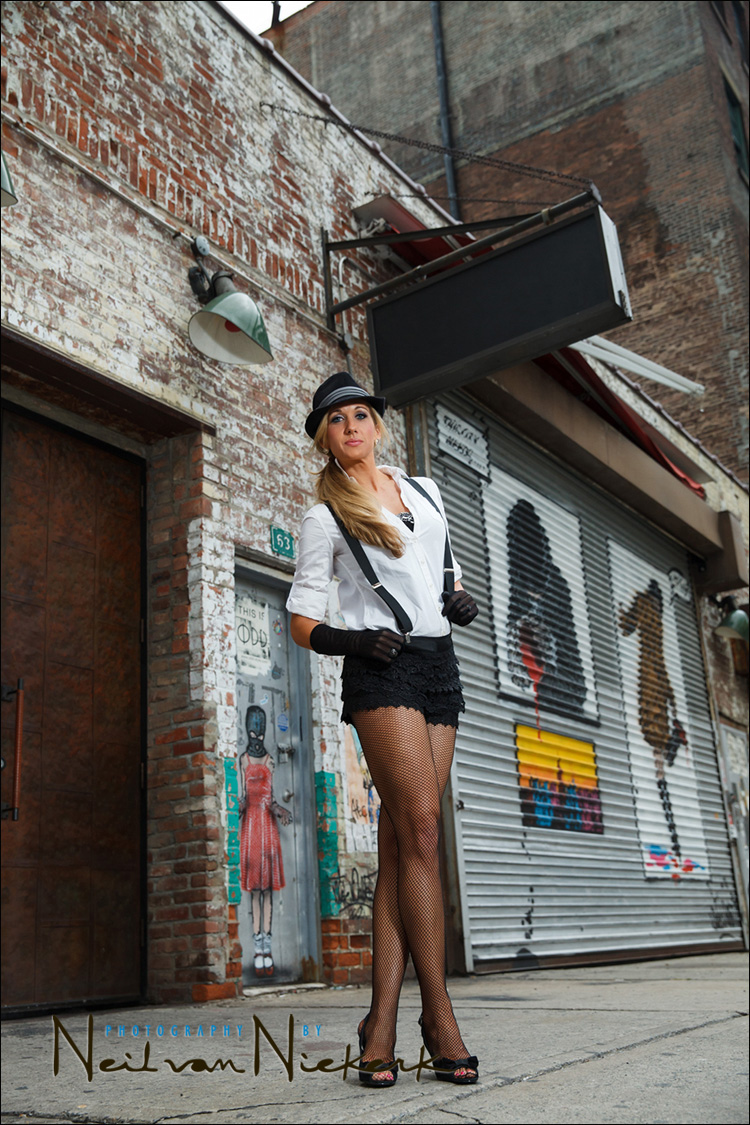 This set of images had camera settings which differ slightly. This is because the light was changing, with clouds coming in, and then opening up slightly again. Keep in mind here that with these images, the flash isn’t lighting up the entire scene. Just my subject. So this really is an exercise in balancing flash with available light. The simplest approach is to under-expose the ambient light on my subject somewhat. Around -0.7 EV or 1 EV. And then add TTL flash to clean up the light on her. 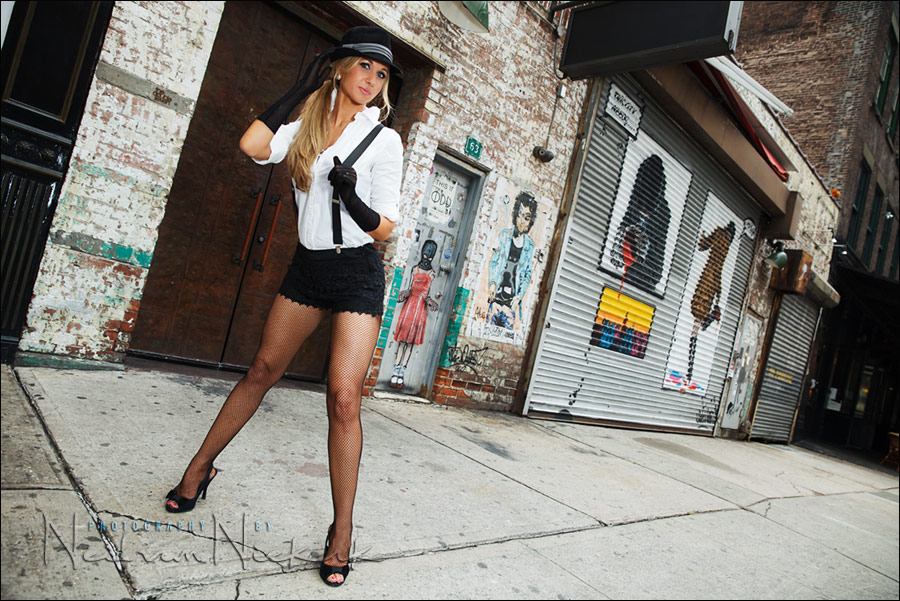 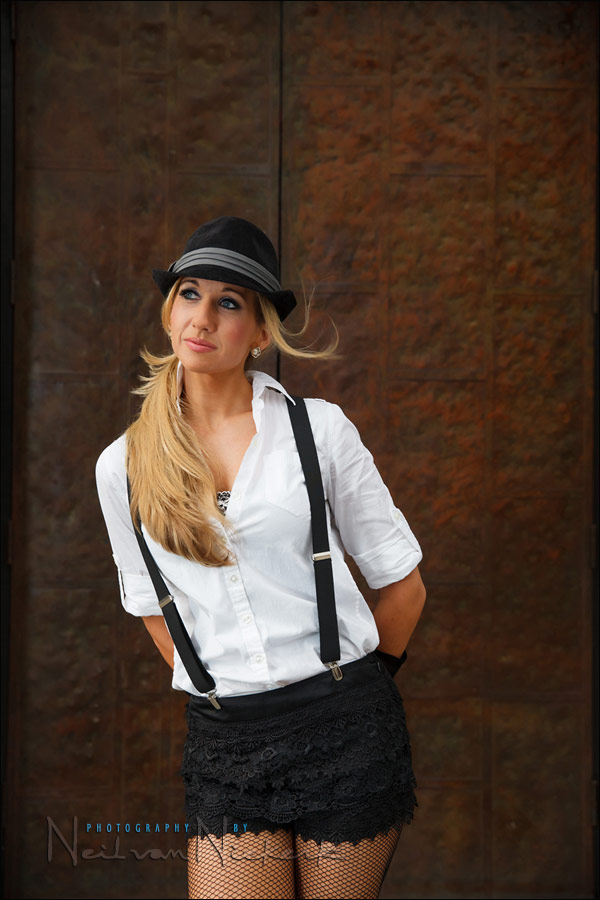 These two images are amongst my favorite images during this shoot. It shows Sarah’s personality. I also love the background here – a doorway. 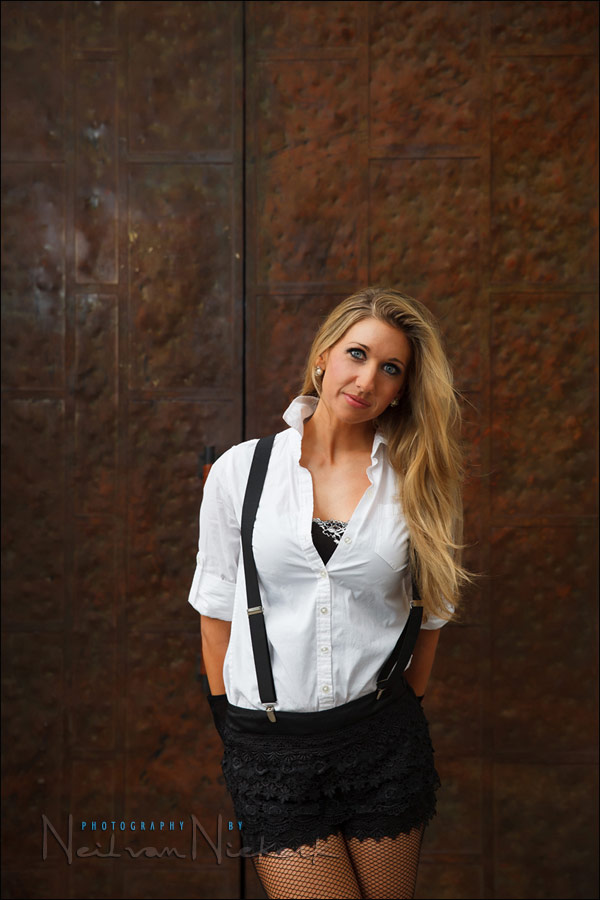 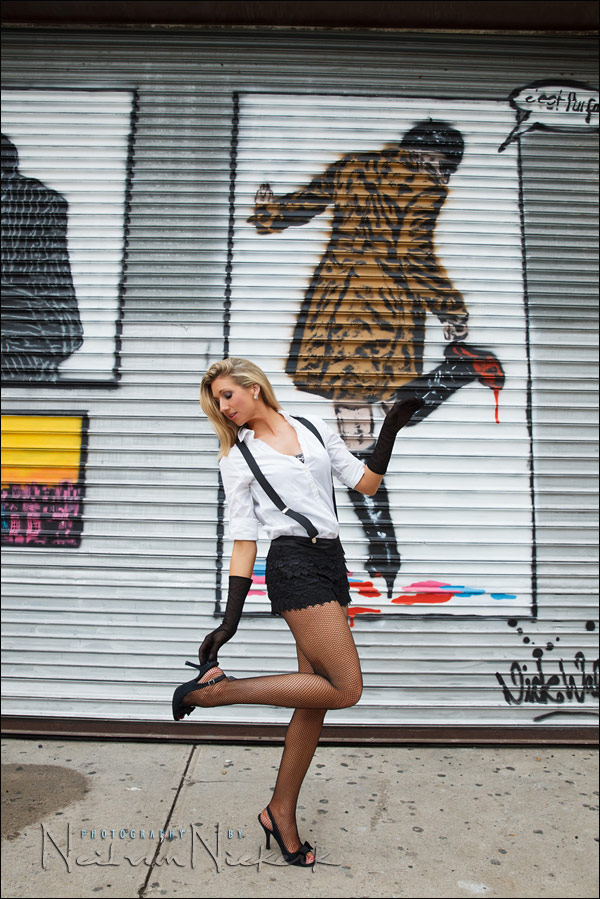 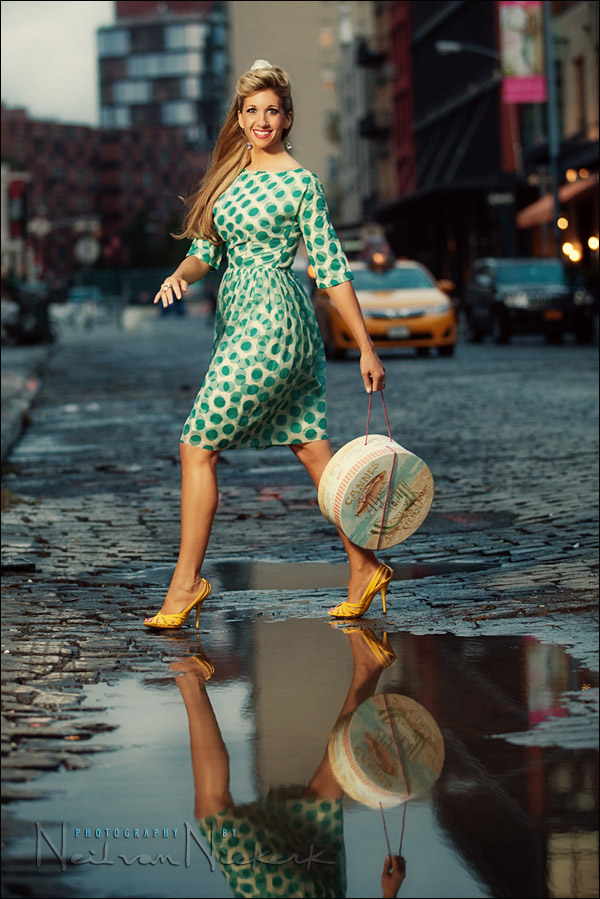 For this part of the photo shoot, Sarah wore this vintage dress and had a hatbox which she carried.

The details for this image is described in the separate article,  vintage photo session w/ Sarah, including the camera and flash settings. 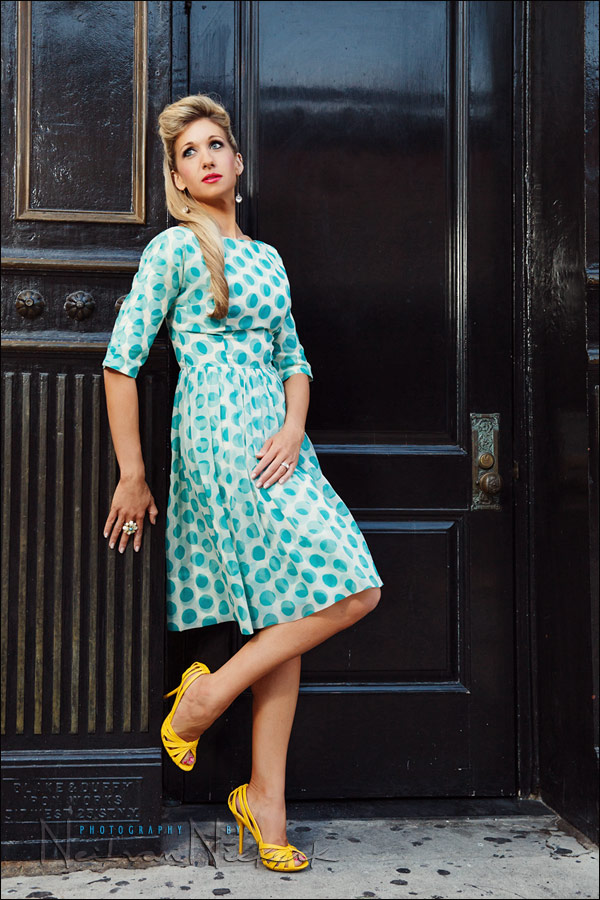 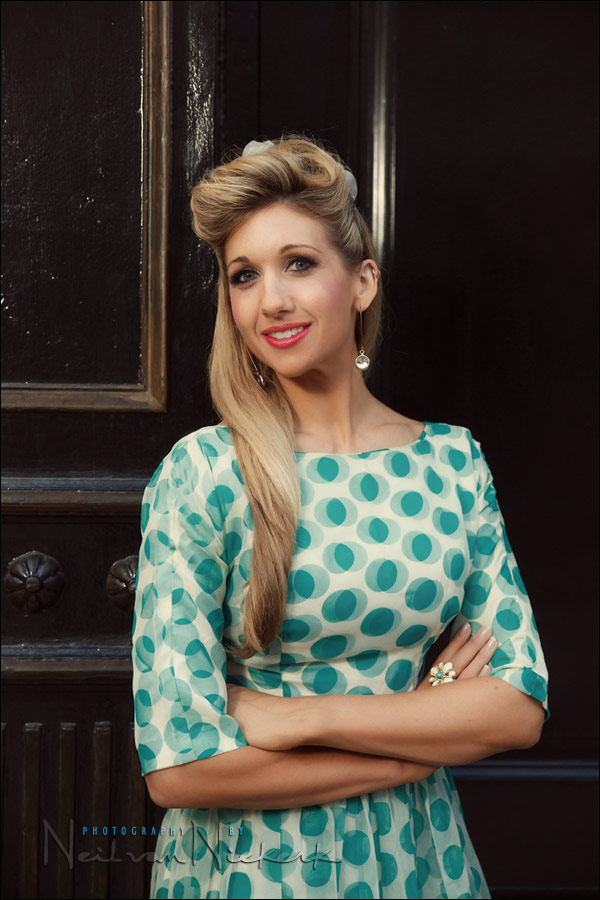 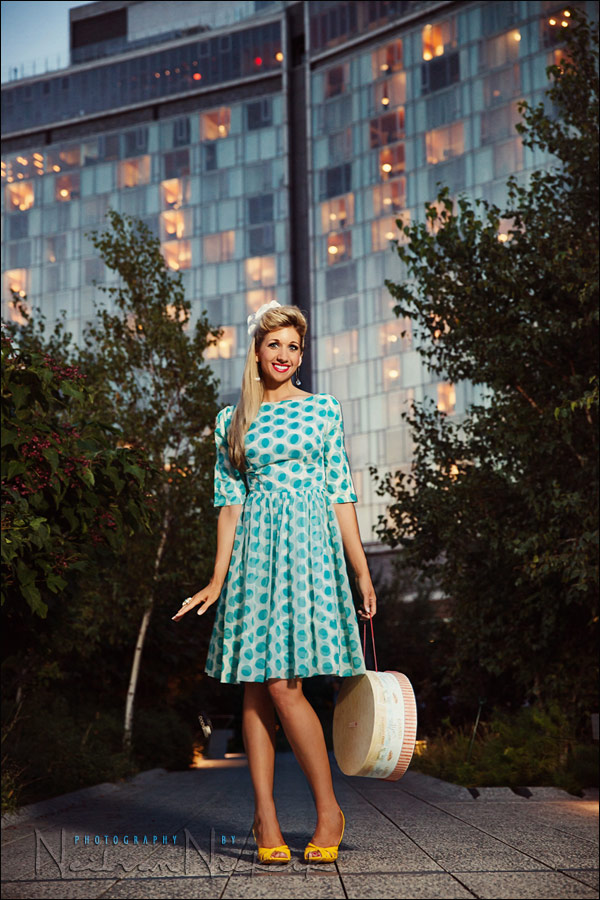 By now it had turned considerably darker, so I dropped my shutter speed. I also opened my aperture (and adjusted my flash output accordingly.)

Here is the straight image as comparison. 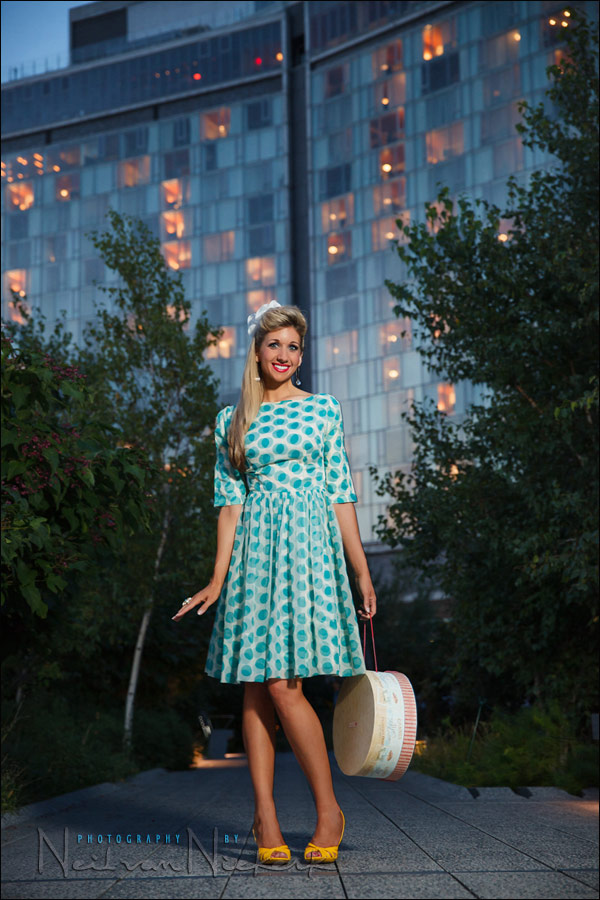 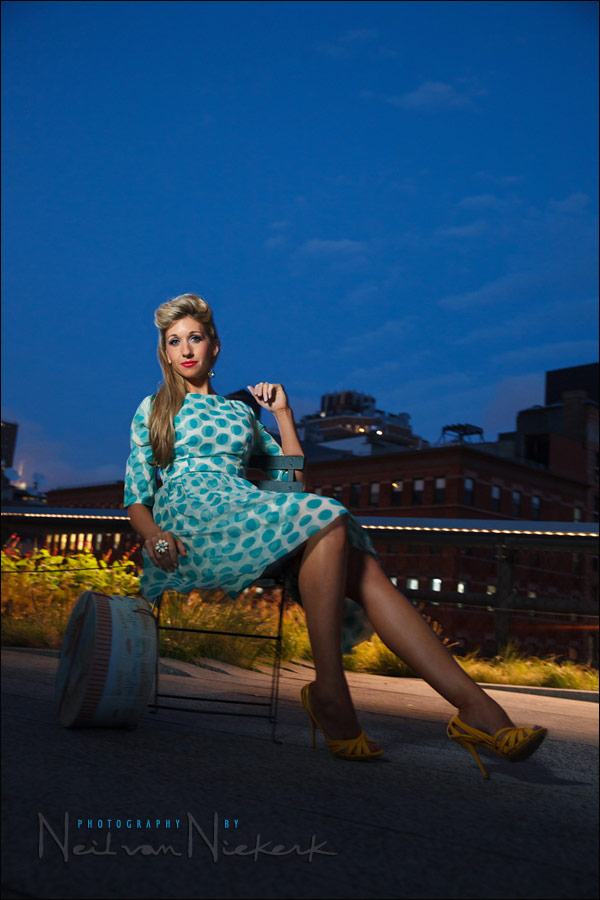 Even darker still, I dropped the shutter speed even more to bring in the available light. In the full-rez image, you can see some blur around the edges of her, where the ambient light smeared against the slightly brighter sky. But since my subject was in darkness, the flash was able to freeze camera movement in general. It’s just that it still shows up against a brighter background.

The question as to whether flash freezes action and movement, always has a complex answer … it depends. We’ll come back to this topic over time.

As you can see in the image above, there is dramatic light fall-off to the bottom of the image. This was purposely done. I asked my assistant to point the softbox upward, so that Sarah was lit only by the edge of the cone of light emanating from the softbox.

The pull-back shot, and the two comparison images so the light fall-off can be seen, compared to a more straightforward shot. As you can see, the unattractive gravel paving is too prominent in the “well-lit” shot. 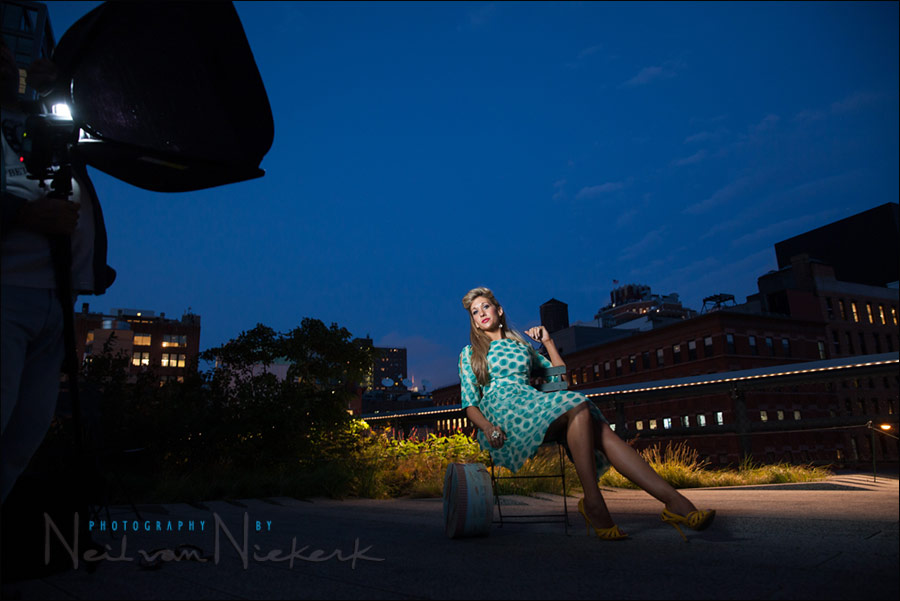 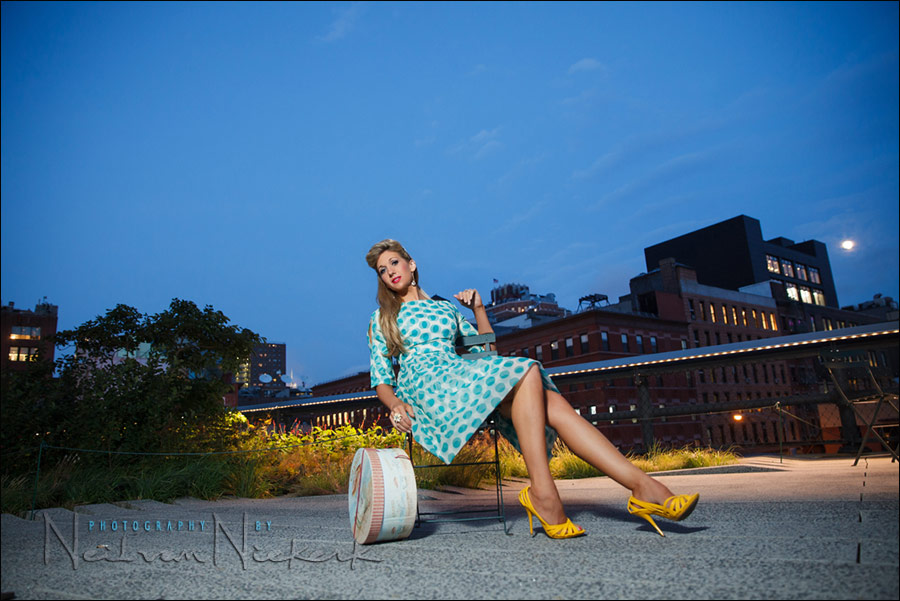 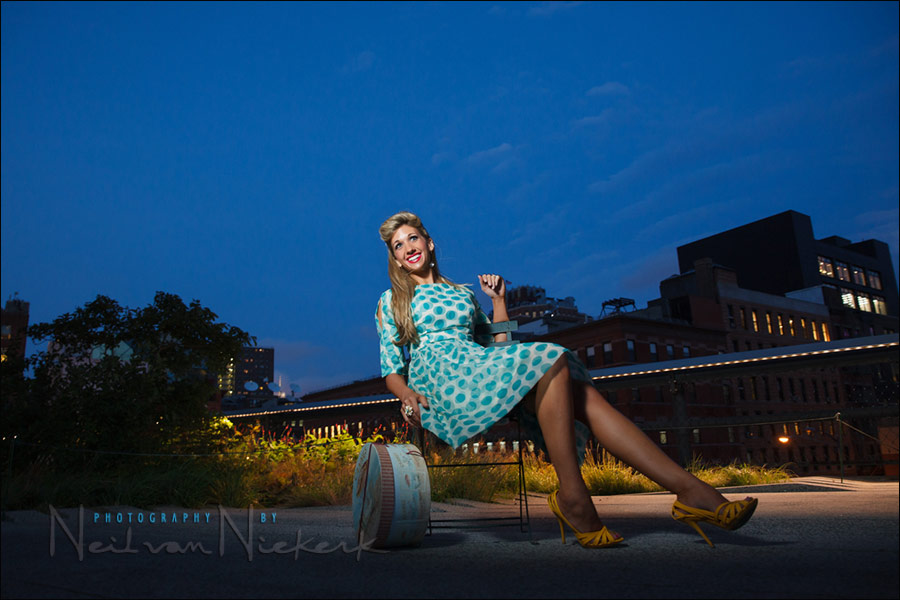 Finally, Times Square! The image at the start of this article, was taken during this later part of the photo session. For a last few photos of Sarah, was shot with the Nikon D4 (affiliate), and Nikon 24-120mm f/4 VR (affiliate) lens. For this sequence, I relied on the flood of available light in Times Square. 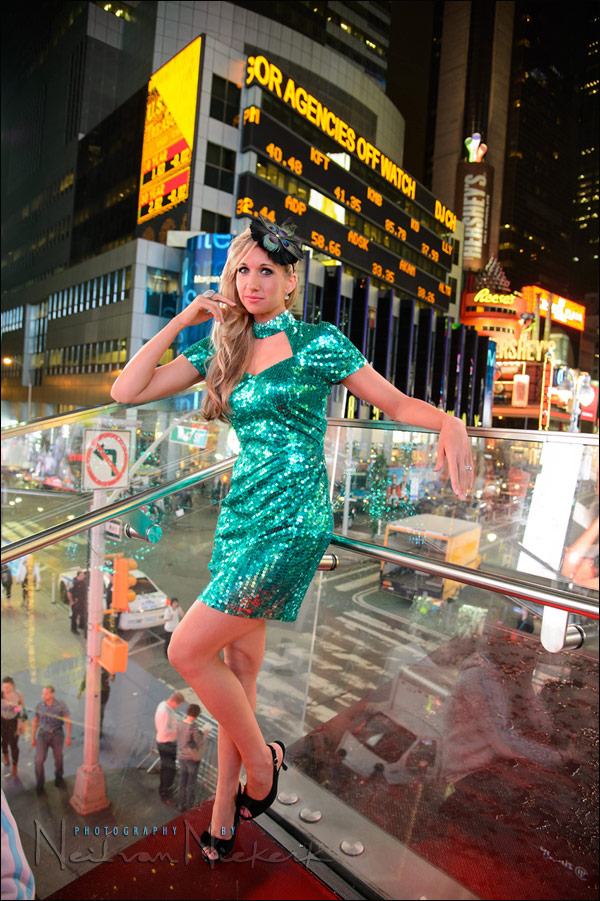